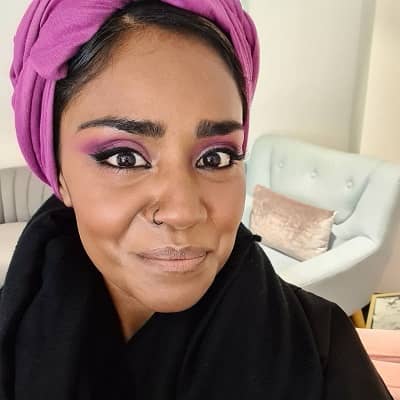 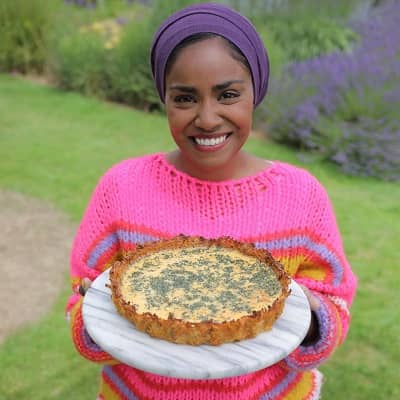 Nadiya Hussain is a British TV chef, author, and television presenter. Nadiya Hussain rose to fame after winning the sixth series of BBC’s The Great British Bake Off in 2015. Likewise, she is a columnist for The Times Magazine and has signed publishing deals with Penguin Random House, Hodder Children’s Books, and Harlequin. She has appeared as a guest panelist on ITV’s Loose Women.

Nadiya Hussain is a second-generation British Bangladeshi, who was born on 25 December 1984, in Luton, Bedfordshire, England. She holds British nationality. Likewise, her age is 36 years old. She attended Beech Hill Primary School, Challney High School, and Luton Sixth Form College. Moreover, she has five siblings: three sisters and two brothers. Hussain’s birthday is on Christmas Day and her sister’s birthday is on Christmas Eve. Also, Hussain’s Sylheti father, who originates from Beanibazar, was a chef and owns an Indian restaurant.

Hussain started wearing a hijab at age 14 to cover up her “bad hair more than anything else” because her father “cut it really badly”. As a teenager, she was diagnosed with panic disorder and underwent cognitive behavioral therapy. She revealed her mental health difficulties in a Sport Relief film. Hussain also tackled childhood anxiety in her book My Monster and Me. Hussain learned basic cooking skills at school. Her mother never baked and used the oven for storage. She taught herself the rest from recipe books and watching videos on YouTube.

In addition, Hussain’s favorite book is a baking-themed book by Irish novelist Marian Keyes. At the time of The Great British Bake Off, Hussain was “a full-time mum” living in Leeds with her husband, an IT specialist, and three children, while studying for an Open University degree in Childhood and Youth Studies. Moreover, when she won the final they moved to Milton Keynes nearer to London so that she could pursue a culinary career. 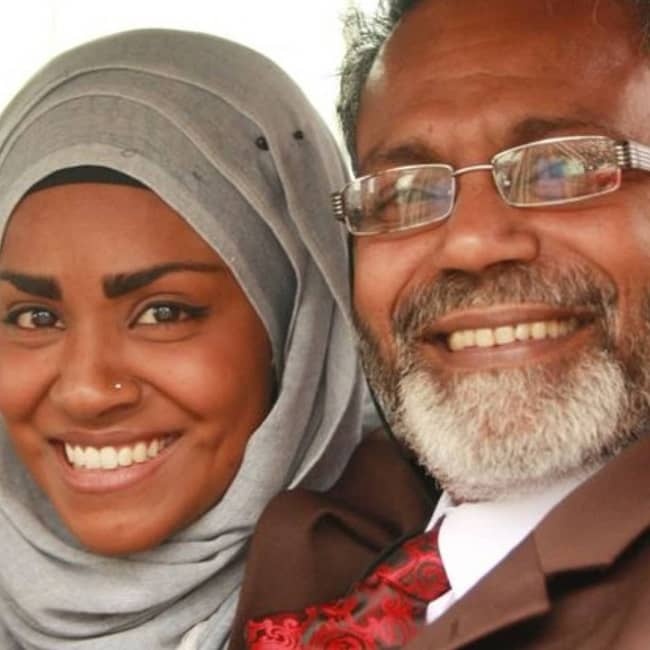 Hussain appeared in and won the sixth series of The Great British Bake Off which aired from 5 August to 7 October 2015. During the final, she baked 16 iced buns in three hours, as well as raspberry-flavored mille-feuille, to one of Paul Hollywood’s recipes, in two hours, and a multi-layered presentation cake which took the form of “My Big Fat British Wedding Cake”, in a time of four hours. With more than 15 million viewers, the final was the most-watched show of 2015. Moreover, her online followers describe themselves as “Nadiyators” and she also won the backing of then Prime Minister David Cameron.

On 25 December, Hussain made a cameo appearance in the BBC One show Michael McIntyre’s Big Christmas Show recorded at the Theatre Royal, Drury Lane. In August 2016, Nadiya was the presenter of a two-part food travelogue, The Chronicles of Nadiya, on BBC One, in which she travels to Bangladesh to trace her culinary roots. She visits her paternal grandfather’s village in Sylhet in the northeast of Bangladesh. In addition, she cooked for the crew of one of the country’s famous paddle steamers and visited a riverside village where they still practice the ancient art of otter fishing. Then, in the capital Dhaka, she helped ‘Thrive’, a charity delivering meals to deprived schoolchildren.

In November 2016, Hussain was a judge on the fourth series of Junior Bake Off on CBBC. Hussain replaced Mary Berry on the competition show in which 40 children aged between nine and twelve compete to create the best cakes and treats. On 21 December 2016, Hussain presented a two-hour cookery show at her home on BBC Radio 2 alongside Olly Smith as part of BBC’s Christmas radio line-up. Moreover, the show is her first new program after signing a deal to make the BBC her ‘home’, rebuffing speculation she would join Channel 4’s version of Bake Off. From July to September 2017, Hussain presented her British Food Adventure, an eight-part series on BBC Two.

In addition, Hussain traveled across the country, visiting food producers, and then returned to her kitchen to cook using ingredients found on her journeys. A tie-in cookery book, published by Michael Joseph, features new recipes that use British ingredients cooked in a Bangladeshi style, such as Masala eggy bread, Yorkshire pudding with chia seeds, and aubergine pakoras with ketchup. From August to November 2017, Hussain co-presented The Big Family Cooking Showdown alongside Zoë Ball. Hussain left the show after the end of series one to focus on her own show, her Family Favorites, and mentioned the decision was born out of her desire to get back to cooking.

In July 2018, Hussain’s second TV cookery series aired on BBC Two. This six-part series, first shown on BBC Two in July and August 2019, included various ‘time-saving kitchen hacks’ and recipes designed to save time and allow families to stay within budget. The show entered the Netflix catalog in April 2020. An eight-part series, first shown on BBC Two in September and October 2020. Hussain has appeared as a reporter for The One Show on BBC One. Hussain is a guest presenter on Loose Women. She announced on the program that she had been given the honor of baking Queen Elizabeth II’s 90th birthday cake, an orange drizzle cake with orange curd and orange buttercream.

On 13 August 2016, Hussain was present as a guest on BBC Radio 4’s Desert Island Discs. She opened up about her struggles as a young mother, the social isolation suffered by some Muslim women, and how her confidence grew during Bake-Off. She described the racial abuse she still receives on the street and, determined to be a good role model for her children, how she responds with the “dignity of silence”. On 9 December 2016, Hussain was a guest on BBC One’s The Graham Norton Show. Hussain is a Contributing Editor to UK’s biggest food media brand, BBC’s Good Food. In addition, Hussain also writes a monthly column for The Times Magazine, a part of the Saturday supplement of The Times, and was previously a columnist for Essentials magazine.

Her recipes have also appeared in BBC’s Good Food magazine, The Guardian, and The Telegraph. Hussain was signed by UK publisher Michael Joseph, part of Penguin Random House, for her debut book Nadiya’s Kitchen. In 2017, Michael Joseph published a tie-in cookery book for Hussain’s primetime eight-part BBC2 cookery series of the same name, her British Food Adventure. Hussain has written a children’s book of stories and recipes, Bake Me A Story, published by Hodder Children’s Books. Her Bake Me a Festive Story was out in October 2017.

In addition, she released her first novel, The Secret Lives of the Amir Sisters, in January 2017. Her autobiography, Finding My Voice, was out in 2019 by Headline Publishing Group. In 2018, Hussain launched her own Homeware range in collaboration with BlissHome. Hussain has suffered from panic attacks throughout her life. She contributed a baking recipe for the YoungMinds mental health charity’s HelloYellow day, for World Mental Health Day on 10 October 2018. Also, she was a Member of the Order of the British Empire (MBE) in the 2020 New Year Honours for services to broadcasting and the culinary arts. 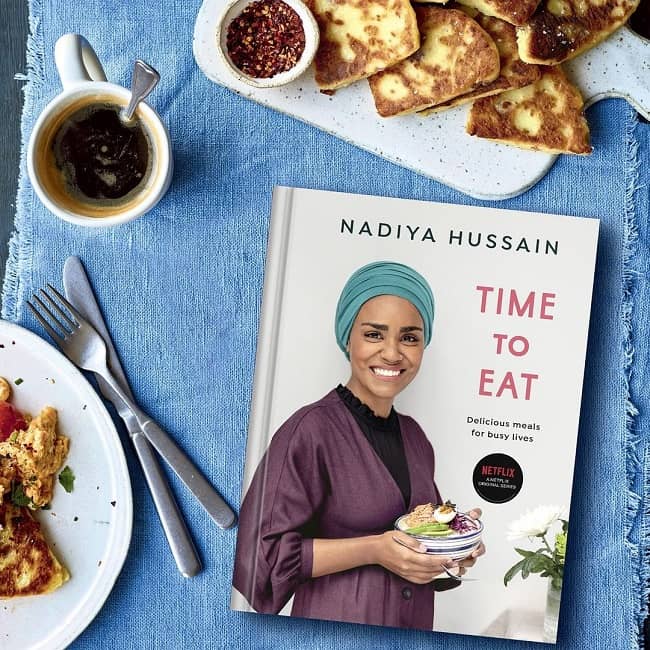 In 2018, he won two awards: the “RTS West of England Awards” and the “Fortnum & Mason Food and Drink Awards”. The same year, she was nominated for “National Book Award”. Moreover, in 2019, she won the “Brand & Lifestyle Licensing Awards”, and “Fortnum & Mason Food and Drink Awards”. The 2016 chart of the Top 100 Food & Drink books by book sales, compiled by industry analysts Nielsen, placed Hussain’s books Nadiya’s Kitchen and Bake Me A Story in third and fourth place, respectively.

Nadia Hussian has quite good earnings from her career as a TV chef, author, and television presenter. As of 2020, Nadia Hussian’s net worth is around $5 million. There is no information about her salary and other assets. However, she is living a great life.

At the age of 20, Nadiya Hussain married Abdal Hussain, whom she had only met once before, in an arranged marriage; they married in a traditional ceremony in Bangladesh. Hussain is an ambassador for Starlight Children’s Foundation. Moreover, in 2018, Hussain became a brand ambassador for Swarovski on a campaign focusing on female empowerment.

She has spoken about her earlier struggles of being in an arranged marriage. In addition, she said, “It’s tough – you are pretty much marrying a complete stranger… We had to live through the good and the bad, and have come out the other side”. In December 2018, she and her husband married each other again. They have two sons, Musa and Dawud, and a daughter, Maryam. 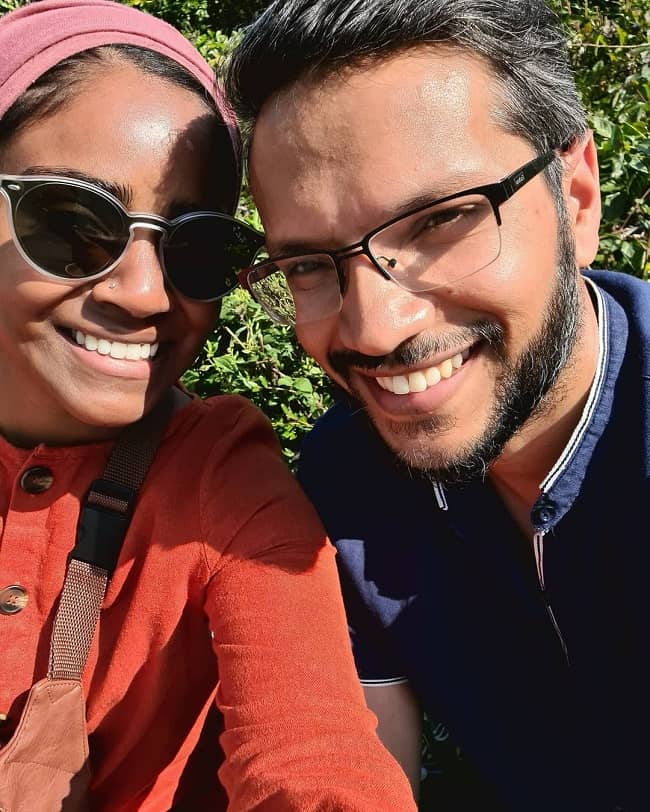 Talking about her body measurement, Nadiya is 5 feet tall and her weight is 55 kg. Hussain has an average body type with a well-maintained daily routine. Likewise, her body measurement is 32-25-34 inches, and her bra size is 32 B. She has a dark complexion with black hair and a pair of dark brown eyes. Moreover, she wears a shoe of size 6 (US) and a dress of size 4 (US). Her sexual orientation is straight.