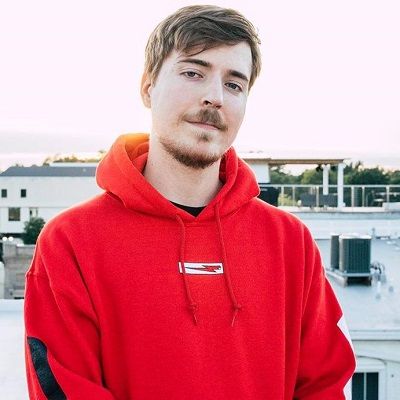 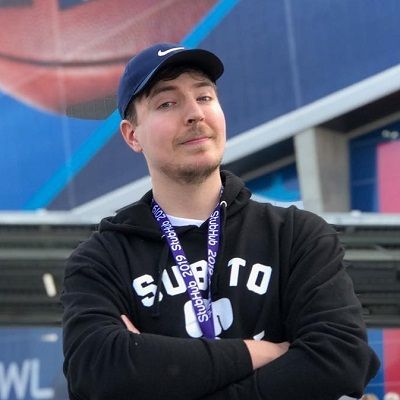 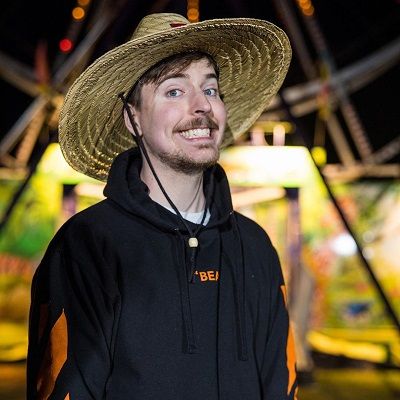 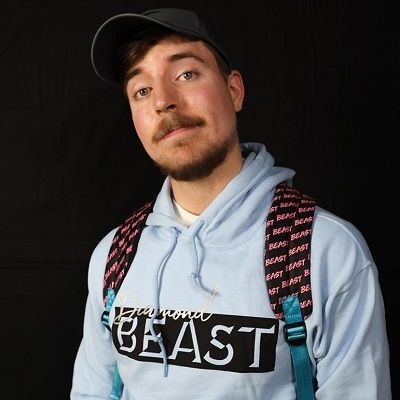 MrBeast is an American Youtuber. MrBeast is mostly popular for his expensive stunts and philanthropy. He has two additional Youtube channels along with his main channel. Likewise, he also does partners with apps like Honey, Tiktok, Quidd, etc.

MrBeast was born on 7 May 1998 and he is currently 22 years old. His real name is Jimmy Donaldson but he is more popular by his online alias MrBeast. Similarly, he is originally from Greenville, North Carolina. Talking about his education, he graduated from the Greenville Christian Academy in 2016. However, according to Newsweek, he dropped out of college to pursue a full-time career as a YouTuber.

Talking about his family, he has an older brother named CJ Donaldson. He has his own channel named “MrBro”. Though he has not mentioned her name, he has featured his mom in his YouTube video titled Surprising My Mom With $10,000+ Home Makeover. Additionally, during an online interview with Keemstar, he has said that he has Crohn’s disease.

MrBeast is a YouTuber most notable for his expensive stunts and philanthropy. He is also credited as the pioneer of a genre of YouTube videos that center around expensive stunts. Moreover, he is also the co-creator of Team Trees, a fundraiser for the Arbor Day Foundation. It has raised over $21 million dollars for the cause.

More precisely, heMrBeast began posting videos to YouTube in 2012 at age 13, under the handle MrBeast6000. His video content in earlier days ranged from Let’s Plays to videos estimating the wealth of other YouTubers. However, his videos remained in relative insignificance, averaging around a thousand views each. It was until the release of his 2017 “counting to 100,000” video that earned tens of thousands of views in just a few days.

As of May 2020, he has 34.5 million subscribers on YouTube. The Dallas-based talent management company Night Media manages him. Likewise, he also made multiple comedic videos concerning Donald Trump during the 2016 election season. 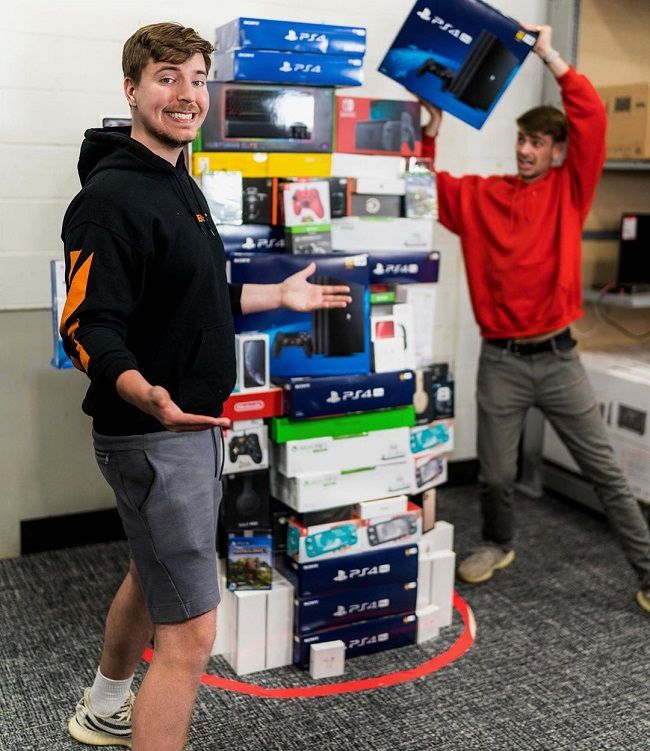 More About his channels

He is mostly popular for the videos on his channel that often consist of him either donating a lot of money, saying or reading long words or repeating them, or doing a particular task for hours or even days on end. With his relentless passion and devotion to finishing arduous yet creative challenges, he has become an extremely popular YouTuber in recent years.

His channel is mostly run by he himself, his roommate Chris, and several other affiliates. They make very unique outside videos as experiments, challenges, or just something creative. He and his roommate both also do a lot of donation videos to Twitch Streamers, notably females and well-known Fortnite players. Currently, his main channel is the 17th most subscribed channel in the United States.

He also has a second channel called BeastHacks (formerly Mr.Beast). In this channel, he and his friends react, commentate, and review on life hacks, and roast them if they are disgusting or bad. His brother, CJ Donaldson, is also a Youtube who has a channel inspired by his brother, called MrBro. MrBro started his channel in 2017 but only started posting in August of 2019. He also makes challenge videos just like his brother.

In January 2017, he published an almost day-long video of himself counting to 100,000. This particular stunt took him 40 hours, with some parts sped up to keep it under 24 hours. A subsequent video titled Counting to 200,000 (Road to a Mil) was uploaded the next month, although, according to him, it too, had to be sped up. It was because the full 55 hours of counting exceeded the limit of YouTube’s upload.

Additionally, he has tried to break the glass using a hundred megaphones, watched paint dry for an hour, attempted to stay underwater for 24 hours (but failed because of health issues), and unsuccessfully and successfully attempted to spin a fidget spinner for a day, although the footage is gone.

In March 2019, he organized and filmed a real-life battle royale competition in Los Angeles with a prize of $200,000. Two games were played, making game earnings of $100,000 for each game in collaboration with Apex Legends.

Several of his videos include giving away large sums of money. For example, giving $100,000 worth of items to homeless shelters in December 2018, donating $32,000 to the Veterans Army Wounded Warrior Program, $70,000 to Saint Jude Children’s Research Hospital, and $10,000 to a local animal shelter in Los Angeles among many others.

During the PewDiePie vs T-Series, he bought billboards and radio advertisements to help PewDiePie gain more subscribers than T-Series. It is a competition to become the most-subscribed channel on YouTube. Similarly, at the Super Bowl LIII, he also bought multiple seats with occupants whose shirts spelled out, “Sub 2 PewDiePie”. 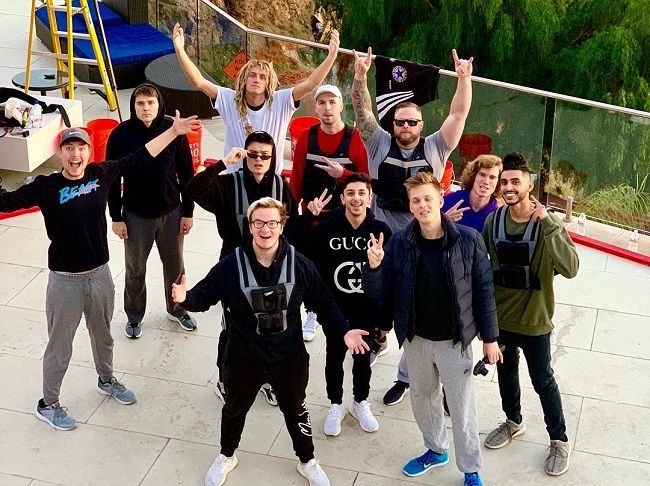 He collaborated with Honey for a large sum of videos and is very respected by many YouTubers. Honey is a free browser extension that helps save money on a lot of shopping websites.

Similarly, Quidd is his first sponsorship and they have sponsored videos like when he gave a homeless man $10,000 and paid expenses for when he took a 2,256 mile trip in a Uber from North Carolina to California. Quidd is an app where you buy stickers (via in-app currency) to text to friends.

On only one video, he was sponsored by TikTok (formerly known as Musical.ly). It is a very popular social media platform similar to Vine where users can upload 15-60 second videos with the choice of adding music in the background. Similarly, he was also sponsored by EA to promote Star Wars Jedi: Fallen Order on an Instagram giveaway and most notably Apex Legends.

Likewise, he uses funds from his official merchandise store to help create costly videos by promoting gift codes with the names of his crew to remove 10% off first order.

On 25 October 2019 at 19 UTC, MrBeast along with the former NASA engineer and YouTuber Mark Rober organized a collaborative fundraising challenge event on YouTube called #TeamTrees. The goal of this project was to raise $20 million for the Arbor Day Foundation by 1 January 2020 and plant trees “no later than December 2022”.

In exchange for this, the organization would plant one tree for each dollar raised. Some notable YouTubers like Rhett & Link, Marshmello, iJustine, Marques Brownlee, The Slow Mo Guys, Ninja, Simone Giertz, Jacksepticeye, Smarter Every Day brought attention to this idea.

They would begin planting trees in January 2020 in national parks of the United States. By the 24 hour mark of the 67-day project, people had donated nearly $4 million. Then on 19 December of that year, they had surpassed the $20,000,000 goal. And as of 6 March 2020, the project reached over 21.7 million dollars. The project has also received large donations from corporate executives Jack Dorsey, Susan Wojcicki, Elon Musk, and Tobias Lütke among many others. 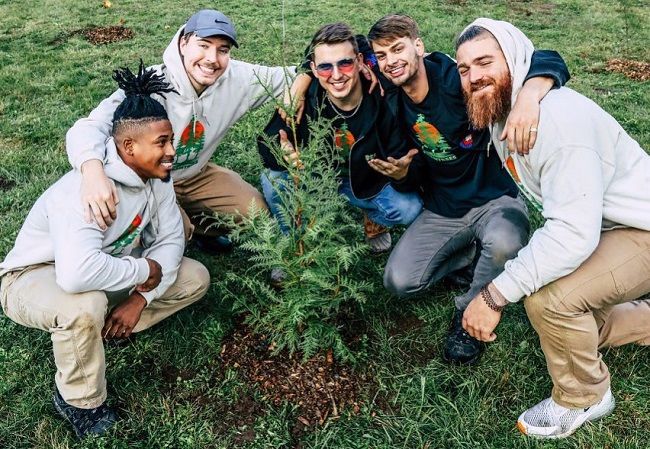 Caption: MrBeast along with his friends and fellow YouTubers planting trees. Source: Instagram

He has been heavily criticized for using clickbait to gain money and subscribers. Even though he continues to do it, not much has changed from where he had begun. A YouTuber with the username @iox exposed him for starting several fake gift card giveaways by mocking other YouTubers, who have done such giveaways, at the end of his videos.

On 4 April 2018, a YouTuber with username FlyyDoesYT posted a video claiming that his videos are fake and only stars at the beginning, such as in I Tipped Waitresses $20,000 and that he has multiple employees who are miserable working for him.

The next day, DramaAlert had an interview with him about the situation and in response, he said that his videos are not fake, his employees love working for him, and he has spent at least $500,000 donating and giving out to people in his videos. He has also claimed that he has Crohn’s disease and it was the reason why he was not in the entire I Tipped Waitresses $20,000 video. Fans have since defended him, and FlyyDoesYT has gotten negative responses over his video because of it.

Ever since he released his viral video Can 20,000 Magnets catch a Bullet Mid-Air? which quickly became his most viewed video of his in 3 days, it became pretty controversial due to the thumbnail. The thumbnail does show him firing an AK weapon towards another person (Chris, Jimmy’s partner), while it did not happen in the video.

YouTube has made its Guidelines more strict about guns in videos and thumbnails, especially with it affecting Gun Channels. People say his thumbnail is breaking YouTube’s Community Guidelines because of what the thumbnail contains. People say it’s misleading and harmful.

Due to the criticism that followed, the thumbnail had been changed to not include the person on the opposite side. At the time before the video was removed, it had received a mass amount of dislikes ever recorded on Jimmy’s YouTube channel at the time, at least a 25% dislike ratio, and a 75% like ratio.

The controversial video, although it was removed or set to private, was reuploaded on 31 June 2019, by the fan posing as he YouTube Channel, only with Chris being excluded from its thumbnail. Still, the video continued to remain available online.

In his video titled I opened a FREE BANK, people started to claim that he never actually gave away the money as he shows in his videos. Their evidence was that in one frame of the video you could see that the money he had given to someone was prop money that would have been used in films. This also appeared on Drama Alert where Keemstar defended him using the disclaimer that he had put in the video description.

At present, MrBeast is in a romantic relationship with Maddy Spidell. They met through Twitter as per some sources. Similarly, this news was publicized in June 2019. Other than this, there isn’t much information regarding his past affairs. Moreover, he has also been keeping a clean public profile that is away from any rumors, controversies, and scandals. 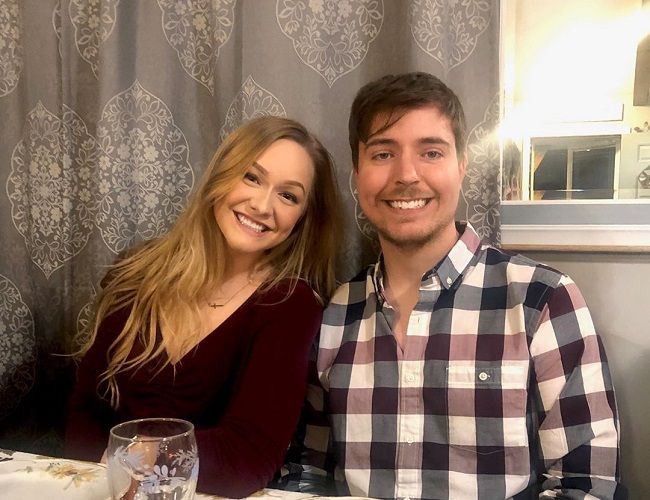 Caption: MrBeast photographed together with his girlfriend on a Thanksgiving. Source: Instagram

Youtuber stands at a height of 6 feet 3 inches and weighs around 82 kgs. Other than these, there is no information available on his body measurement details like his chest-waist-hip measurements, biceps, dress size, shoe size, etc. Similarly, he has light brown hair and eyes of the same color.

Besides Youtube, he is also available on other social media platforms. He joined Twitter in April 2014 and so far has 5.7 million followers. Similarly, his Instagram handle boasts 145 posts shares and 10.6 million followers as of August 2020.

Moving on, talking about his net worth estimation, his main Youtube channel alone earns $22 million dollars. He has published over 72o videos on this channel. This all together add up to more than 4.6 billion views. Likewise, he creates on average 2 new videos every month earning 20 million video views every day and 95.7k new subscribers on a daily basis.