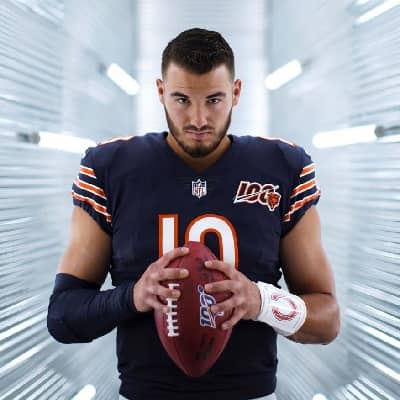 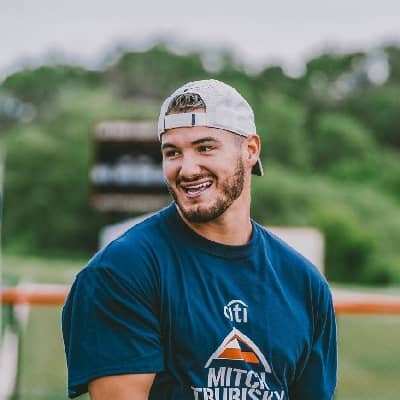 Mitchell Trubisky is an American football quarterback for the Chicago Bears of the National Football League (NFL). Mitchell Trubisky played college football at North Caroline and was drafted by the Bears with the second overall pick in the 2017 NFL Draft.

Mitchell Trubisky was born on August 20, 1994, in Mentor, Ohio. His birth name is Mitchell David Trubisky. He holds an American nationality. Similarly, his age is 26 years. The names of his parents are Dave and Jeanne Trubisky. He also has three siblings sister, Mariah, and younger brothers, Manning and Mason. His younger brothers also play American football. 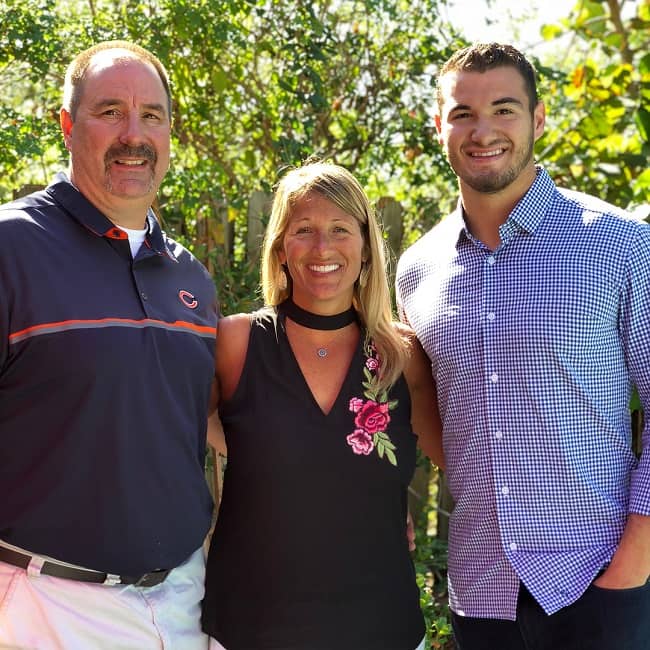 Mitchell Trubisky attended Mentor High School where he played for the Cardinals football teams. During his high school football career, he passed for 9, 126 yards and 92 touchdowns and rushed for 1,559 career yards and 33 touchdowns. He was the recipient of the Ohio Mr. Football Award in 2012. Trubisky committed to the University of North Carolina at Chapel Hill to play college football under head coach Larry Fedora. Trubisky is nicknamed “Mr. Biscuit” as a play on his name.

Coming out of college, Trubisky was projected to be a first-round pick by the majority of scouts and analysts. ESPN and Pro Football Focus ranked Trubisky the second-best quarterback, NFLDraftScout.com ranked him as the top quarterback in the draft, and Sports Illustrated ranked him the fourth-best quarterback available. Trubisky was drafted by the Chicago Bears in the first round with the second overall pick in the 2017 NFL Draft. During the 2017 preseason, Trubisky recorded the third-highest passer rating of the 29 quarterbacks with at least 50 passes with 106.2, along with three touchdowns and no interceptions.

After the Bears started the season with a 1–3 record, head coach John Fox benched Glennon and Trubisky was named the starter for Week 5. Trubisky made his first regular-season start on October 9, 2017, against the Minnesota Vikings. In his next start, he completed 8-of-16 passes, including a touchdown and a critical completion in overtime that set up a game-winning field goal in a 27–24 win over the Baltimore Ravens. During Week 7 against the Carolina Panthers, Trubisky was limited to 107 passing yards, but with the defense forcing three turnovers and two defensive touchdowns, the Bears won by a score of 17–3.

In the regular-season finale, a 23–10 loss to the Minnesota Vikings, he had 178 passing yards and no interceptions.
Trubisky ended his rookie season with a 4–8 record in 12 starts, seven touchdown passes, and seven interceptions.  In December, Trubisky has named an alternate to the 2019 Pro Bowl. After 163 yards in the season finale victory over the Minnesota Vikings. He received an overall grade of 63.6 from Pro Football Focus in 2018, which ranked as the 33rd highest grade among all qualifying quarterbacks. Trubisky became the youngest Bears quarterback to throw a touchdown pass in the playoffs since Doug Flutie in 1986. On January 21, 2019, he has officially declared a Pro Bowl participant in place of the Super Bowl-bound Jared Goff. He became the first Bears quarterback since Jim McMahon in 1986 to be named to the Pro Bowl. 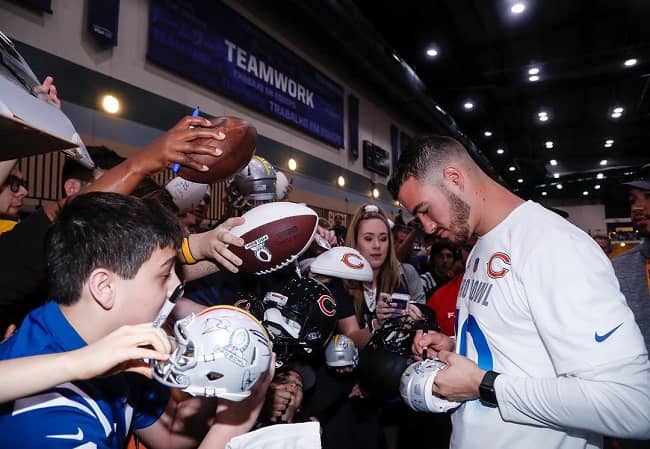 Mitchell Trubisky earns from his professional football career. His income comes from salary, bonuses, contracts, and endorsements. The Bears drafted him 2nd overall in the 2017 NFL Draft. His annual salary should be around $7 million. His net worth is estimated at $15 million.

Mitchell Trubisky is unmarried but not single. He is currently dating Hillary Gallagher. Hillary Gallagher is studying a marketing degree at Florida State. Trubisky made their relationship official in May 2019. The additional information about how, where, and when the couple met are not revealed yet. It seems like the couple is having a good time currently. 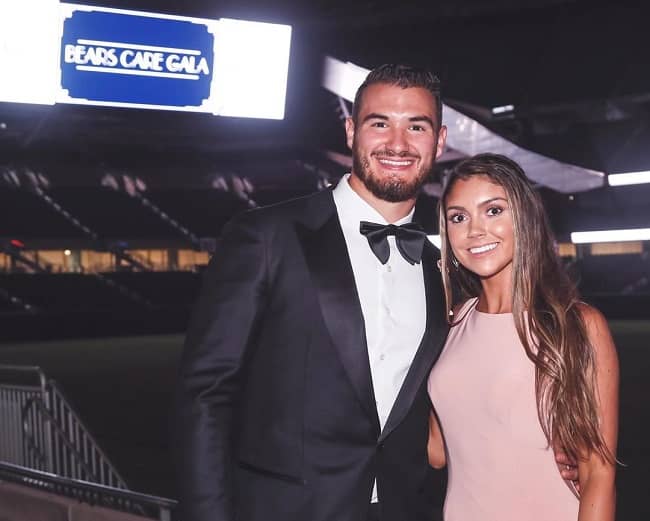 Talking about Mitchell’s body measurement, she stands the height of 6 feet 2 inches tall and weighs 98 kg. He has an athletic body type. Moreover, he has a pair of dark brown eyes and dark brown hair. Other remaining information regarding his dress size, shoe, size, chest size, Waist size, etc are still missing. Furthermore, he has a very handsome face and looks very attractive.

Coming to social media, Mitch Trubisky is quite active there. He uses Instagram and Twitter only.  There are 278K followers on his Instagram account and 139,8K followers on Twitter. He mostly shares posts related to his work and hanging out with his teammates. Sometimes, he also uploads pictures and videos of him spending time with his family and also his girlfriend.