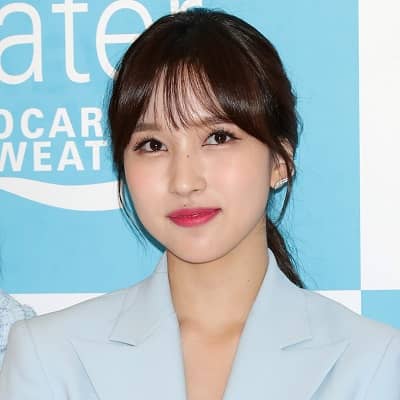 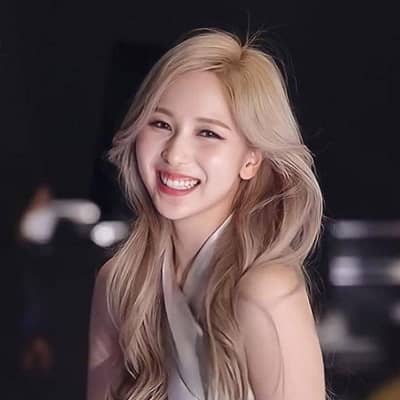 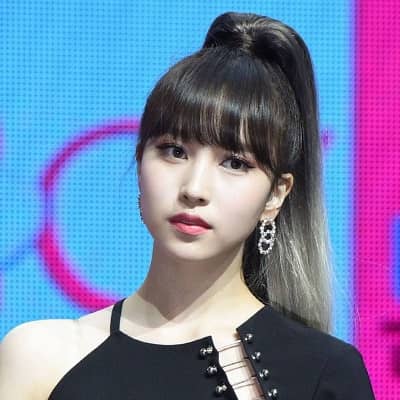 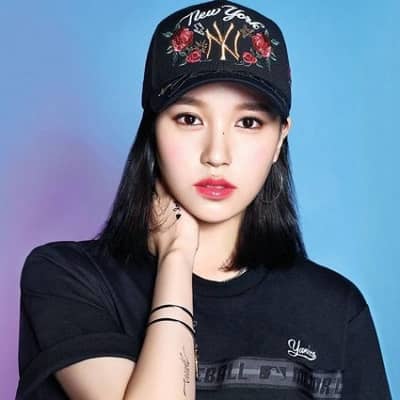 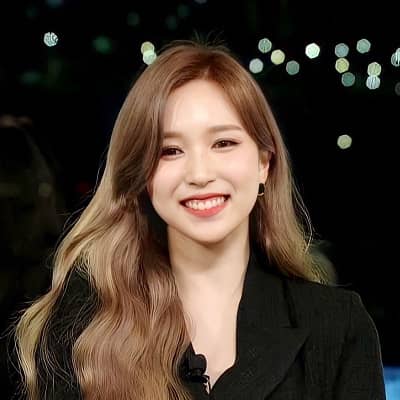 Mina is a famous American-born Japanese singer and dancer based in South Korea. Mina is internationally recognized as the main dancer and sub vocalist of the South Korean girl group Twice.

Mina was born on March 24, 1997, and she is currently 24 years old. At birth, Mina’s family resided in San Antonio, Texas, the U.S. Her full name is Mina Sharon Myoi (名井 南). She is more popular by her stage name Mina (미나/ミナ). Further, her English name is Sharon.

Though born in the United States, Mina grew up in Kobe, Hyōgo Prefecture, Japan. When she was still a toddler, Mina’s family moved back to Japan. Talking more about her family, her parents are mother Sachiko Terao and father Akira Myoi. Mina’s father is an orthopedic surgeon at Osaka University Hospital in Suita. Likewise, Mina has an older brother named Kai Myoi.

At a young age, Mina trained in ballet. Regarding her educational journey, Mina attended Obayashi Sacred Heart School in Takarazuka, Hyōgo. Previously, Mina had dual citizenship of both Japanese and American. However, as of 2019, Mina is no longer a citizen of the United States.

This was confirmed by the “Quarterly Publication of Individuals Who Have Chosen to Expatriate” which was published by the United States Internal Revenue Service. This list names the individuals who have lost citizenship in or before the previous quarter. 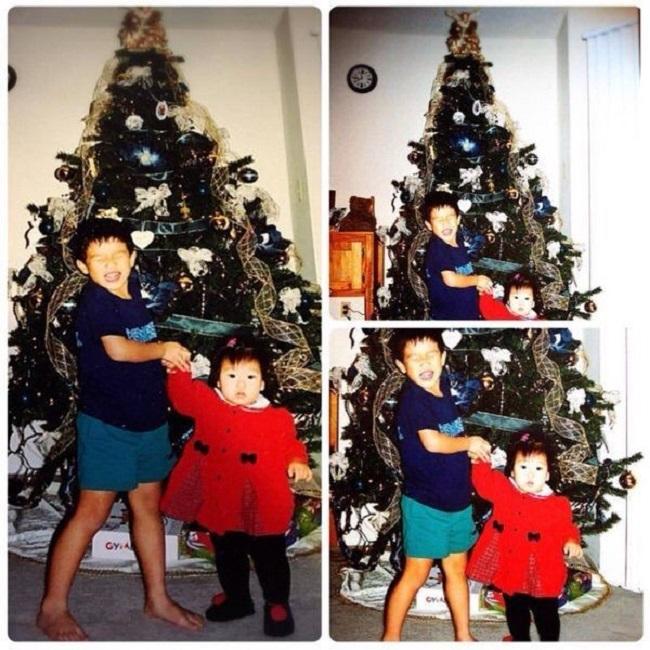 Caption: Mina with her brother in a childhood photograph. Source: Bias Wrecker

Professionally, Mina is a popular singer and dancer based in South Korea. More prominently, Mina is internationally famous as a member of the girl group “Twice”. Even before joining Twice, Mina had practiced ballet for over a decade. Twice is a South Korean girl group formed under the entertainment agency JYP Entertainment. The other members of this internationally renowned girl group are Nayeon, Jeongyeon, Sana, Jihyo, Momo, Dahyun, Chaeyoung, and Tzuyu.

The girls made their official debut on October 20, 2015, with the EP The Story Begins. They were formed after participating in the TV program Sixteen. The three Japanese members in this girl group are Sana, Momo, and Mina herself. Likewise, Twice also consists of a Taiwanese member and she is Tzuyu. The remaining members – Dahyun, Chaeyoung, Nayeon, Jihyo, and Jeongyeon – are of South Korean origin.

Talking about the beginning of Mina’s journey in the music industry, a JYP recruiter approached and offered her an audition while she was shopping with her mother in Osaka. The singer later departed for South Korea in the year 2014. She traveled to a foreign country to become a K-pop idol starting from January 2, 2014. Moreover, Mina is the Twice member who had the shortest training period before their debut.

Likewise, the singer was initially a trainee under JYP Entertainment. Then in the year 2015, Mina participated in Sixteen. It is a South Korean reality TV show that JYP Entertainment hosted and Mnet co-produced. The young singer also featured in J.Y. Park‘s music video for the song Fire with her fellow Twice members – Nayeon, Jeongyeon, Sana, Jihyo, Momo, Chaeyoung, and Tzuyu. 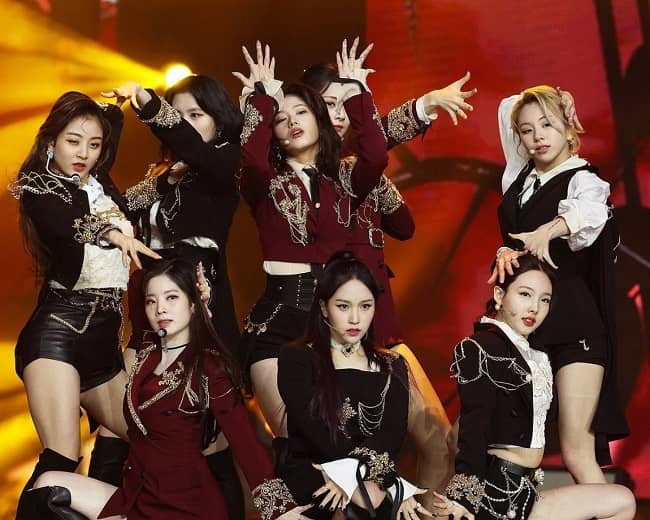 Caption: Mina performing ‘Cry For Me’ on stage with Twice. Source: Twitter

The America-born Japanese singer became one of nine successful participants on the show. Eventually, Mina went on to join Twice, the then newly formed girl group. Then on 20 October the same year, Mina made her official debut as a singer with Twice. The girl group’s debut lead single Like Ooh-Ahh was the first K-pop debut song to reach 100 million views on YouTube.

Furthermore, Mina is popular as one of Twice’s main dancers. The singer/dancer is also popular in South Korea and abroad. The popularity of the Japanese Twice members – Momo, Mina, and Sana – is credited for improving relations between Japan and South Korea by the Chosun Ilbo. Likewise, in Gallup Korea’s annual music poll of the year 2019, Mina was voted on #20 as the most popular idol in South Korea.

Moreover, on July 11, 2019, there was an announcement by JYP Entertainment. This announcement mentioned at Mina would miss the remainder of Twice’s ongoing World Tour Twicelights. It was due to Mina’s sudden extreme anxiety and insecurity problems regarding performing on stage.

They diagnosed Mina with an anxiety disorder. Then in February 2020, the reports confirmed that the young Japanese singer’s condition had improved. The report also mentioned that Mina had returned to performing live with Twice. Further, Mina has starred in Junho‘s Japanese version of Feel, GOT7‘s Stop Stop It, Wooyoung‘s Japanese version of Rose, and Miss A‘s Only You. Likewise, Mina was also ranked #91 in “Most Beautiful Faces” in the year 2019. 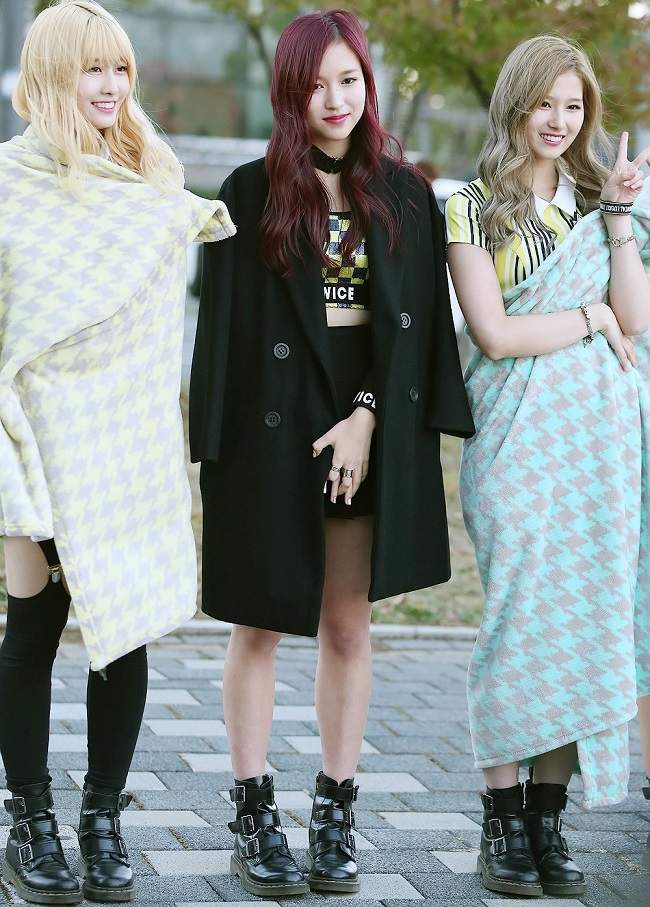 Caption: Mina posing for a photo with Momo and Sana, the fellow Twice members of Japanese origin. Source: Reddit

Mina is currently single. The Twice singer-dancer has not shared any social media posts and announcements regarding this issue. Moreover, Mina has a hectic schedule which prevents her from meeting her ideal lover or go on dates. Nevertheless, when the time is right, Mina is sure to grab the attention of many young lovers through her charm, talent, and beauty.

Mina stands tall at an approximate height of 163 cm or 5 feet 4 inches and her weight is around 46 kgs or 101 lbs. Likewise, Mina’s blood type is “A”, has dark brown eyes and hair of the same color.

Talking about her social media presence, Mina is available on Instagram under the username @green_mina0324. The Twice singer has over 47.4k followers. She is currently inactive on this platform and also has deleted all her previous posts from her account.

Nevertheless, we can get updates regarding Mina on Twice’s official accounts on various platforms. Moving on, Mina has a net worth estimation of over $1 million US dollars.