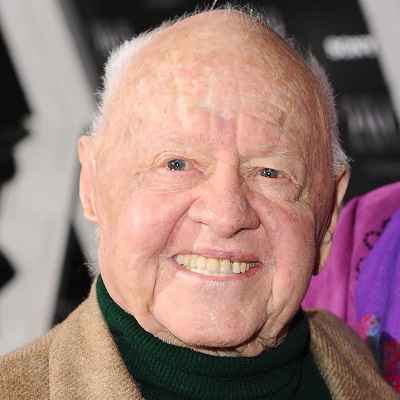 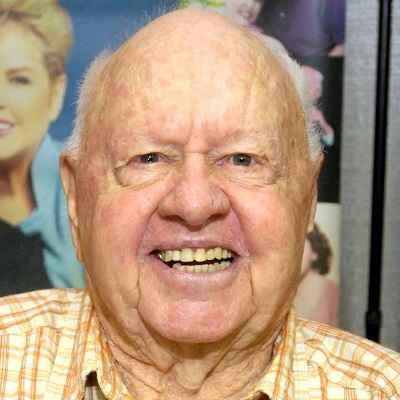 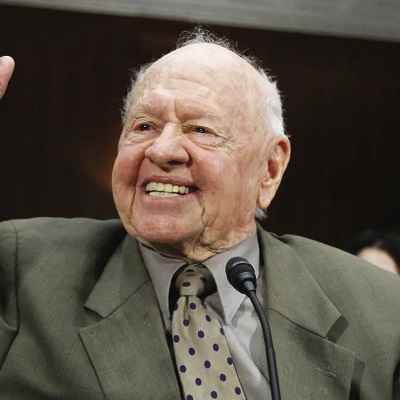 Mickey Rooney was a popular American actor. Mickey Rooney worked as an actor for 9 decades and appeared in over 300 films throughout this time.

Mickey Rooney was born on 23 September 1920 and he was 93 years old at the time of his demise on 6 April 2014. Likewise, his birth name was Joseph Yule Jr. Similarly, Rooney was originally from Brooklyn, New York City, and his zodiac sign was Libra.

Talking about his family, Rooney was the only child of his parents Nellie W. Carter and Joe Yule. While his mother was an American former chorus girl and burlesque performer, Rooney’s father was a vaudevillian.

When this personality was born, his parents were working together in a Brooklyn production of A Gaiety Girl. As a part of his parents’ routine, this personality started to perform at the young age of 17 months. At the time, Rooney wore a specially tailored tuxedo. 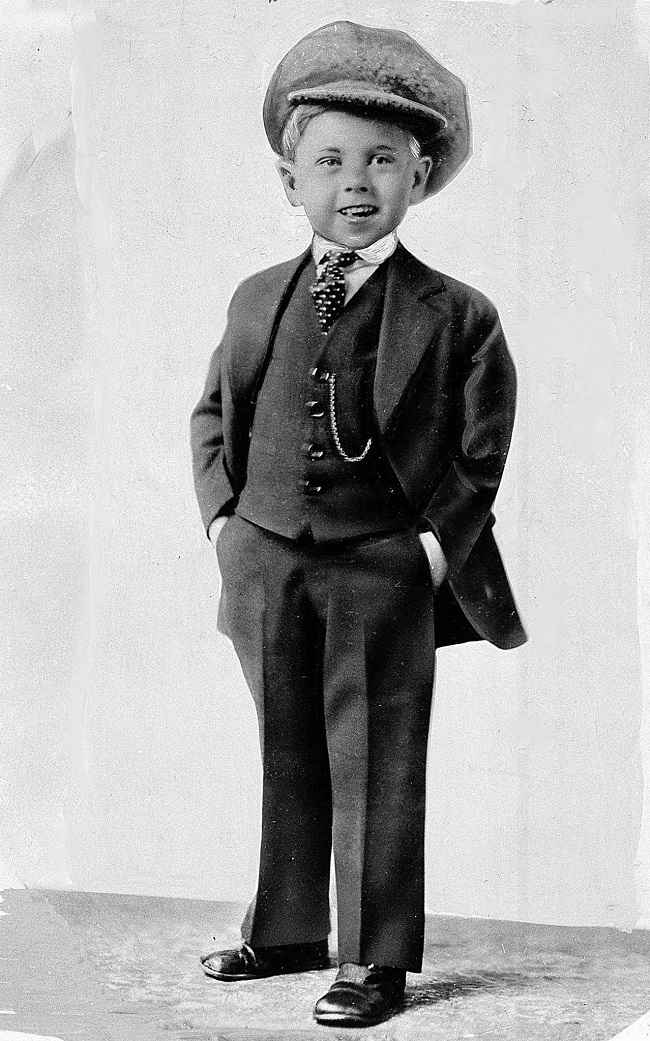 This actor sadly passed away on 6 April 2014. He was 93 years old when he died of natural causes including complications from diabetes. At the time of his demise, Rooney lived in Studio City.

Professionally, Mickey Rooney was a popular actor who appeared in over 300 films in a career that spanned nine decades. Moreover, actor Rooney was among the last surviving stars of the silent-film era. Also, this actor was the top box-office attraction from 1939 to 1941 as well as one of the best-paid actors of the said era.

At the height of a career marked by declines and comebacks, this actor appeared as Andy Hardy in a series of 16 films in the 1930s and 1940s. Additionally, at the peak of his career between ages 15 and 25, Rooney made 43 films. At this time, he was also one of MGM’s most consistently successful actors.

This actor became a celebrated character actor later in his career who won a Golden Globe Award and an Emmy Award in the year 1982. He won these celebrated awards for his role in the TV movie Bill. Also, he received the Academy Honorary Award in the same year. 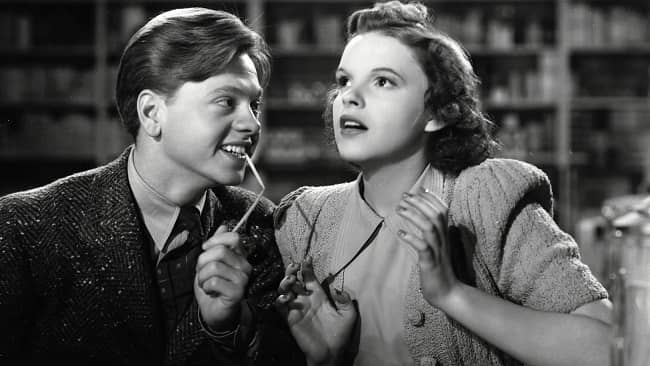 Caption: Mickey Rooney in a scene from the 1939 movie Babes in Arms. Source: AZCentral

Talking about the beginning, actor Rooney initially performed in vaudeville as a child actor. Subsequently, he made his film debut at the young age of 6 years. Similarly, Rooney played the role in the Mickey McGuire series of 78 short films. He worked on these films from the age of 7 to 13 years. When he was 14 and 15 years old, this late actor played the role of Puck in the play and subsequent film adaptation of A Midsummer Night’s Dream.

Then he started to play the role of Andy Hardy at the age of 16 years. This actor then gained initial recognition at the age of 17 after he played the role of Whitey Marsh in Boys Town. At only 19, this late actor became the 2nd-youngest “Best Actor in a Leading Role” nominee. Similarly, Rooney received the award for a special Academy Juvenile Award in the year 1939.

During World War II, Rooney was drafted into the military. Subsequently, this late actor served nearly two years entertaining over two million troops on stage and radio. He also received a Bronze Star for performing in combat zones.

He returned from the military in the year 1945. Following his return, Rooney was too old for juvenile roles and too short for most adult roles. As a result, this late actor was unable to gain as many starring roles.

However, Rooney played the lead roles in numerous low-budget yet critically well-received film noir during this period and the 1950s. He then revived his career with his roles in The Bold and the Brave, Requiem for a Heavyweight, It’s a Mad, Mad, Mad, Mad World, Pete’s Dragon, and The Black Stallion.

For his roles in The Bold and the Brave and The Black Stallion, this late actor received Academy Award nominations for “Best Actor in a Supporting Role” in the years 1957 and 1980 respectively. Then in the early 1980s, Rooney returned to Broadway in Sugar Babies. For his role in this project, Rooney received nominations for Tony Award and Drama Desk Award for “Best Actor in a Leading Role in a Musical”. 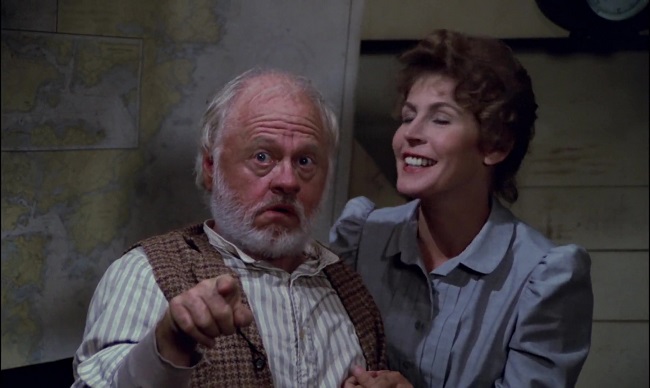 Moving on, Mickey has a net worth of around $38 million. Rooney earned all this money through his acting projects throughout his 9 decades of working as an actor.

Mickey Rooney was married eight times. He tied the knot with Jan Chamberlin in 1978. Jan was his 8th and final wife. His marriage with Jan lasted for 34 years. Though this marriage lasted longer than his seven previous marriages combined, Jan and Mickey separated in the year 2012.

Talking about his previous relationships, Mickey married for the 1st time in 1942 and it ended the next year. His 1st wife was actress Ava Gardner. His 2nd marriage was in 1944 to Betty Jane Phillips. With Betty, Mickey had two sons Mickey Jr. and Tim.

Rooney had his 5th marriage in 1958 to Barbara Ann Thomason (aka Carolyn Mitchell). From this marriage, he has five children namely Kelly Ann, Kyle, Kimmy Sue, Michael, and Kerry. Barbara was murdered in 1966 by Milos Milos – a stuntman and actor.

He then tied the knot with Barbara’s best friend – Marge Lane. However, this marriage lasted only 100 days. His 7th marriage was with Carolyn Hockett which lasted from 1969 to 1975. From this marriage, he has two children namely Jonelle and Jimmy. 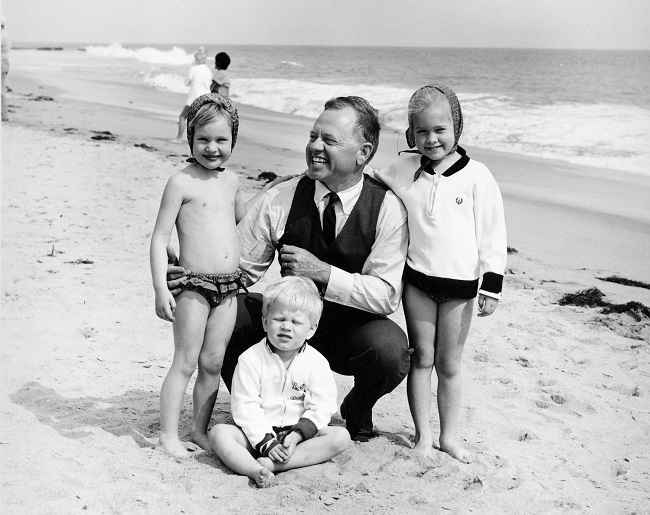 Caption: Mickey Rooney on a beach with his children Kerry, Kyle, and Kelly, Source: The New York Times

Mickey Rooney stood at an approximate height of 5 feet 2 inches or 157 cm and his weight was around 58 kgs. Similarly, this late actor had blue eyes and blonde hair that turned grey with aging.