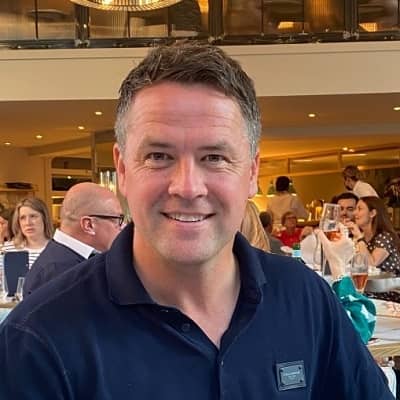 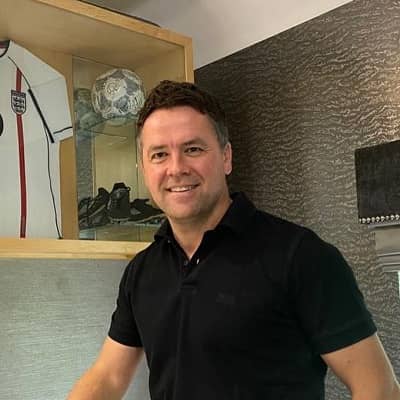 Michael Owen is a retired football player from England. Moreover, Michael Owen has played as a striker for Liverpool, Real Madrid, Newcastle United, Manchester United, and Stoke City, as well as for the England national team.

Michael James Owen best known as Michael Owen was born on the 14th of December, 1979, in Chester, England. According to his birth date, he is 42 years old and holds English nationality.

Moreover, he has a birth sign of Sagittarius and believes in Christianity by religion. This former footballer is the son of Terry Owen (father) and Jeanette Owen (mother). 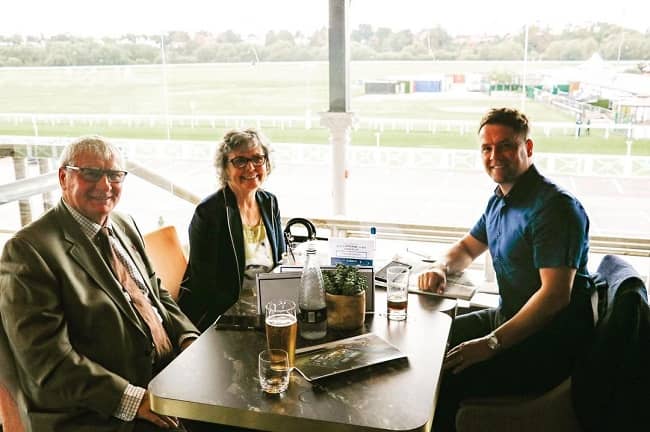 Professionally, his father was a former professional footballer and played for clubs such as Chester City and Everton. In addition, he grew up with his three siblings; Terry Jr., Karen, and Andrew.

Michael Owen began playing football at the young age of seven, following in the footsteps of his father. At age 8, he played school football with the U11 team at Deeside Area Primary School.

He became captain at the age of 9 and set a record that had stood for 20 years by scoring 97 goals in a single season. He also broke Gary Speed’s appearance mark for the 11-year-olds by playing in each of the three seasons.

He was being observed by many of the top scouts in the country by the age of eleven. He later joined Mold Alexandra’s young club and played for the U10 team. In 24 games during his debut season with the team, he scored 34 goals.

This player signed a schoolboy contract with Liverpool when he was 12 years old. He has drawn interest from Chelsea and Arsenal, among others. Climbing through Liverpool’s youth ranks. He was a crucial member of the Liverpool young side that became the first in club history to win the FA Youth Cup.

At the age of 17, he signed his first professional contract with Liverpool. In May 1997, he played Wimbledon for the first time and scored his first goal as a senior.

He became the highest-paid teenage player in British football history when he signed a five-year, £2.5 million contract with the team. After scoring 18 goals in the league, Owen won the Premier League Golden Boot again in 1998–1999.

He stayed with the team for a further five seasons, contributing to its 2001 domestic treble win. In his time with Liverpool, he won one FA Cup, two Football League Cups, one FA Charity Shield, one UEFA Cup, and one UEFA Super Cup.

In 297 games across all leagues over eight seasons with Liverpool, he scored 158 goals. From 1998 until his departure in 2004, he was Liverpool’s leading scorer.

In 2002, Real Madrid began pursuing Owen. When Owen decided not to extend his contract at Liverpool, they finally succeeded in obtaining him in 2004. In August 2004, he agreed to an £8 million contract with Liverpool. His jersey number was 11. 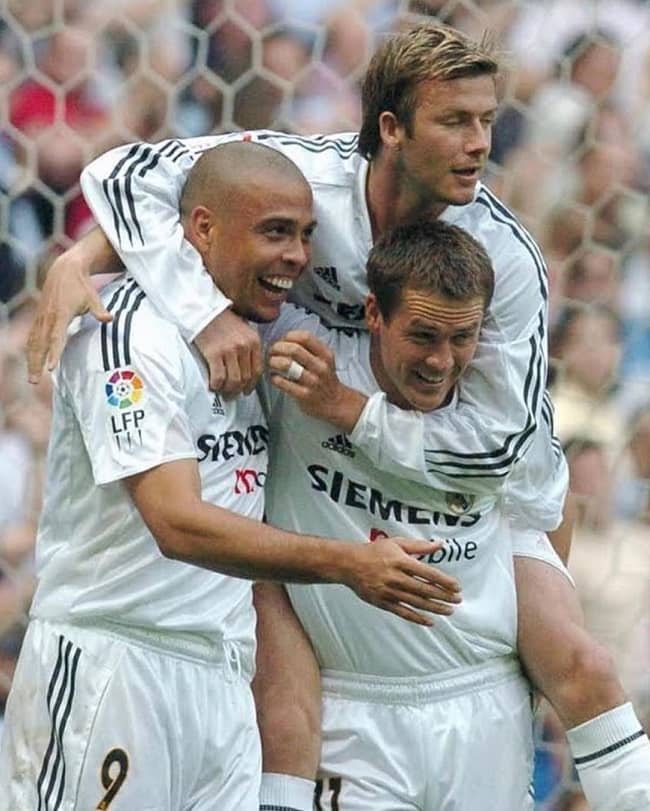 He joined the team during the Galacticos era, alongside David Beckham, Roberto Carlos, Luis Figo, Zinedine Zidane, and Ronaldo. At Real Madrid, he was nonetheless regularly utilized as a substitute striker.

In his first and only season with the club, he only managed to score 13 league goals while receiving less playing time. In 45 games, he scored 16 goals to finish the season.

After a disappointing season with the team, he left and signed for Newcastle United for £16.8 million in 2005. Liverpool made an effort to re-sign him but was unable to meet Madrid’s demand.

Owen’s first season with the club was plagued by a string of injuries. Despite just making 11 appearances for the team, he managed to score 7 goals. In the opening minute of the group game against Sweden at the 2006 FIFA World Cup, Owen suffered an ACL injury to his right knee, forcing him to miss a full season of football.

For the cost of player injuries suffered while playing on the international team, Newcastle sued FIFA and the FA. The club eventually reached a settlement with FIFA and the FA for between £6 million and £7 million in damages.

The FA increased their future insurance coverage for England players to £100,000 as a result of the Owen compensation suit, while FIFA established a compensation fund for injuries occurring at World Cups.

While at Newcastle, several injuries hurt Owen’s performance. Although the team tried to extend his contract, He decided to leave. He scored 30 goals in 79 games in all competitions when he left Newcastle.

Signed a two-year-deal with Manchester United and his retirement

As a free agent, he signed a two-year contract with Manchester United in July 2009. He played with the team for three seasons, and in the 2010–11 season, he earned his first Premier League championship.

In 2010, he also brought home the Football League Cup and the FA Community Shield.
At the end of the 2011–12 season, his contract with Manchester United was not extended, and in September 2012, he agreed to a one-year deal with Stoke City.

His time at the club was once more limited by a hamstring injury. He only served as a substitute eight times in the Premier League, although he did provide the team with one goal.

At the end of the 2012–13 season, this football player announced his retirement from football. He earned a standing ovation from both teams’ fans during his farewell game against Southampton.

From an early age, Michael Owen was a prolific striker. He played in several age categories for England’s youth teams. This player scored nearly 40 age group goals while playing for England’s U15, U16, U18, U20, and U21 sides.

After leaving the field of professional football, he started raising and managing racehorses. He owns a lot of racehorses. His horse Brown Panther won the 2015 Dubai Gold Cup and a significant event at Royal Ascot in 2011. Moreover, he frequently appears as a sports analyst and pundit.

In his footballing career, he has earned several awards and honors. Having scored 150 Premier League goals, he is the seventh player to do so. On the all-time list of England’s national team’s leading scorers, he is ranked sixth.

He once set a World Cup record for England’s youngest goal scorer. He received the Ballon d’Or and the Onze d’Argent in 2001.

In 2001, he received the World Player of the Year award from World Soccer. In  1998, he was honored as the BBC Sports Personality of the Year. He was named the 1998 FIFA World Cup’s Best Young Player. As a football icon, he received the Golden Foot award in 2017.

As the greatest footballer in European football history, he has earned a huge sum of money. As of 2022, his net worth estimates at around $68 million and there is any information regarding his other body measurement.

He also received money through endorsements and sponsorships. Moreover, he has a helicopter and various cars. He represented the British bookmaker Colossus Bets as a marketing ambassador.

In 2001, he served as the model for the breakfast cereal “Nestle Sporties” He has a £1 million endorsement deal with Persil washing powder. Moreover, he has served as a Tissot watchmaker’s ambassador since 1998.

He is bound by an agreement with Jaguar. In 2022, he was named the cryptocasino Punt’s worldwide brand ambassador.

On the 24th of June 2005, he married Louise Bonsall. In 1984, the couple met at primary school. With the marriage, the couple has 4 kids; Gemma Rose, James Michael, Emily May, and Jessica. 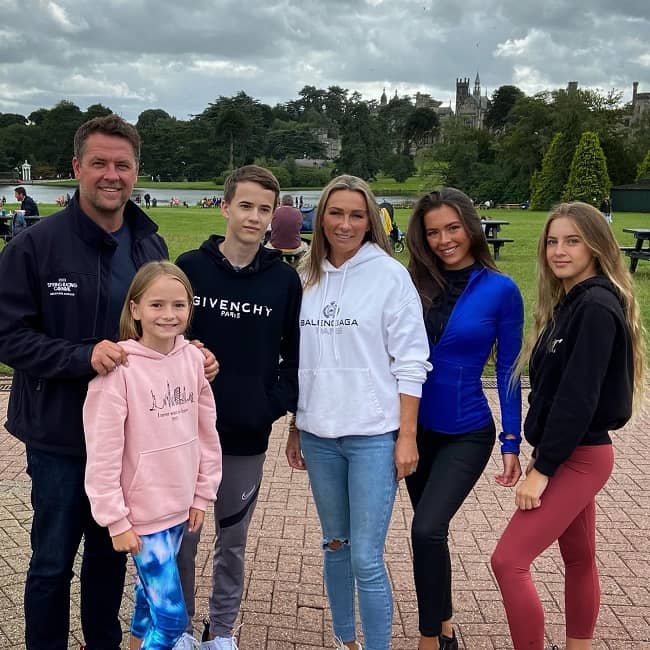 He had several properties in Ewloe. Moreover, he purchased Lower Soughton Manor in Flintshire, North Wales, to house his cars and horses.

This retired football star stands 5 feet 8 inches tall and weighs around 70 kg. Moreover, he has brown eyes and dark brown hair with an athletic body type.