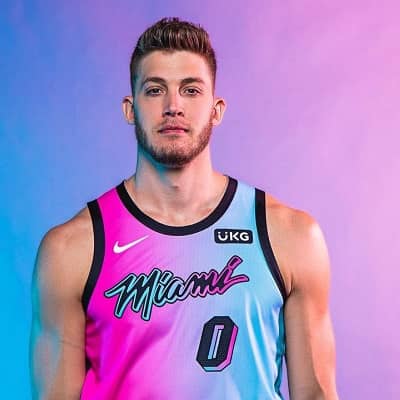 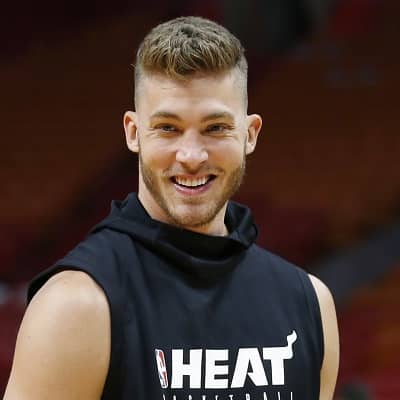 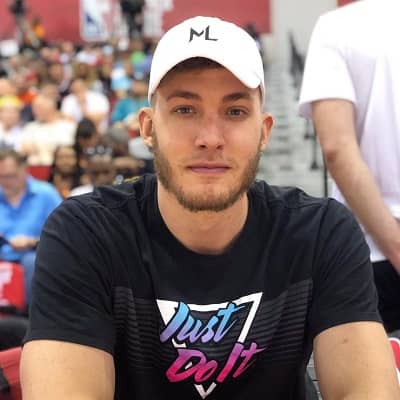 Meyers Leonard is a prominent American NBA basketballer. Meyers Leonard plays for Miami Heat and also has numerous recognitions under this belt.

Meyers Leonard was born on February 27, 1992, and he is currently 28 years old. He is originally from Woodbridge, Virginia, and he grew up in Robinson, Illinois. The latter is a small town in southeastern Illinois. Likewise, Meyers’s star sign is Pisces.

Talking about his family, Meyers’s parents are father James and mother Tracie. Likewise, Meyers also has two older brothers namely Chris and Bailey. One of them is Bailey and he is a U.S. Marine who has also served in Afghanistan. 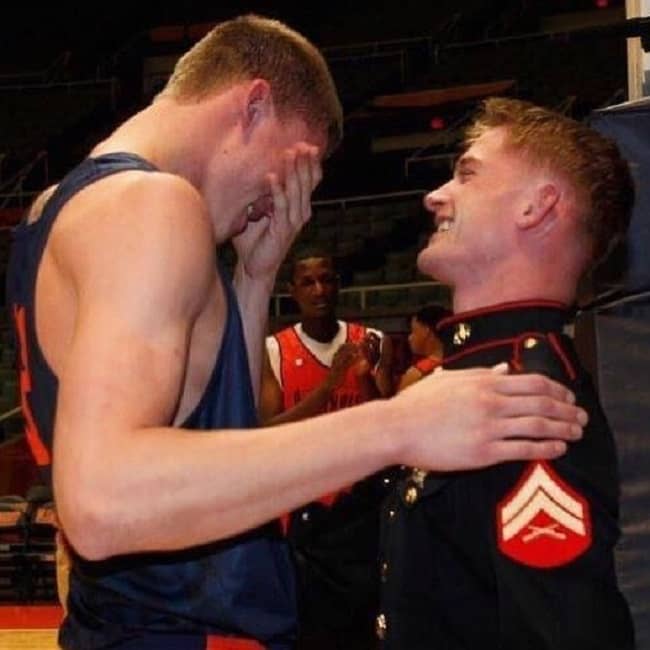 Caption: Meyers Leonard captured while interacting with kids during a game-break. Source: Instagram

His father was a golf pro whereas his mother was once an athlete. She would run upwards of 10 miles a day. Unfortunately, at the young age of 6 years, Meyers lost his father due to a freak bicycle accident.

The more unfortunate incident followed when his mother was largely housebound since his father’s demise. Tracie had an old horseback injury and subsequent disc surgery. These left her with crippling pain. Regarding his educational journey, Meyers attended Robinson High School. Later on, Meyers joined the University of Illinois.

Additionally, when Meyers was in second grade, he gained a surrogate family. An insurance agent in Robinson named Brian Siler had a son of the same age as Meyers Leonard. Brian was also aware of Meyers’s family situation. Hence, Brian subsequently became a father figure for Meyers. Following this incident, Meyers Leonard regularly attended the Silers’ church and even went on family vacations. 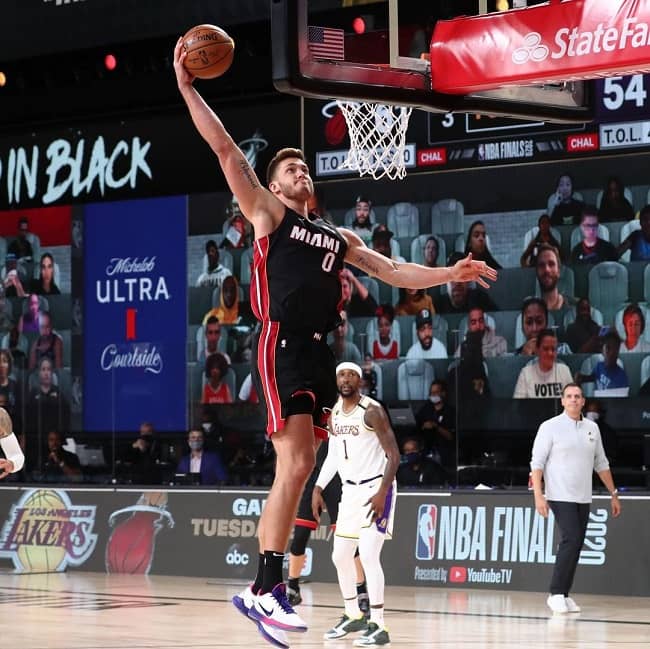 Meyers Leonard is a prominent professional basketball player. Leonard plays for the “Miami Heat” of the National Basketball Association (NBA). Likewise, Meyers also played college basketball for the “Illinois Fighting Illini” before the “Portland Trail Blazers” selected him with the 11th overall pick in the NBA draft in the year 2012.

Moreover, Meyers Leonard is also a content creator for “FaZe Clan” in his spare time. Meyers actually invested in this gaming group in April 2019 as a content creator. The professional basketballer also streams on Twitch. After spending his first seven seasons with the “Trail Blazers”, Meyers traded to the Heat in the 2019 offseason.

Additionally, Meyers Leonard is one of only two NBA players to stand for the National Anthem before games during the resumed 2020 season. Another NBA player who did so is Jonathan Isaac who plays for “Orlando Magic”.

Likewise, Meyers Leonard played shooting guard until he grew six inches. It was back during his sophomore year of high school. Similarly, Meyers was an Honorable Mention All Big-10 selection at Illinois. Meyers was chosen five selections after “Trail Blazers” teammate Damian Lillard in the 2012 NBA Draft. 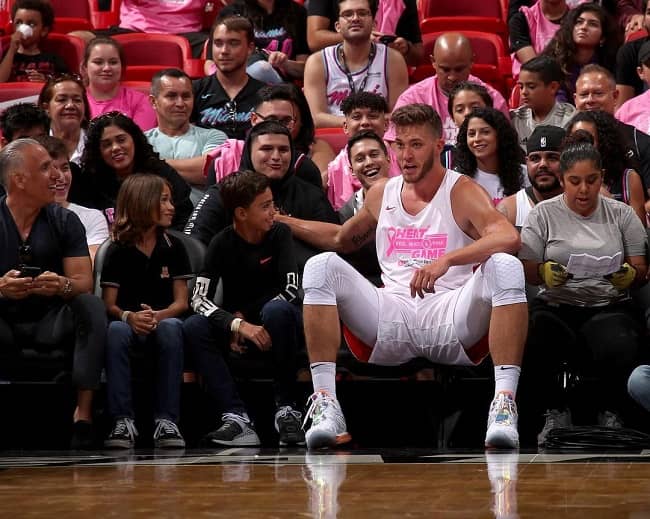 Caption: Meyers Leonard captured while interacting with kids during a game-break. Source: Instagram

Meyers Leonard married Elle Bielfeldt on 2 August 2015. They are long-time sweethearts who met each other in college. The lovers founded a sports bar company called “Level Foods” together.

Meyers’s dog named Bella died of cancer in December 2017. Besides Bella, the couple also has another dog named Koko. Before tying the knot, the couple dated each other for about 4 years. Meyers and Elle met through a mutual friend named Mike Davis. Mike was actually Elle’s friend’s boyfriend. And that’s how the two met each other. Mike was also a senior basketball player just like Meyers.

Moving forward, Elle and Meyers studied together a few times, developed a friendship, and eventually fell in love with each other. Moreover, Elle is a prominent American blogger, entrepreneur, and athlete. We can also find her on various social media platforms. However, his dashing tall height has been the center of attraction to lots of his girl’s fans. 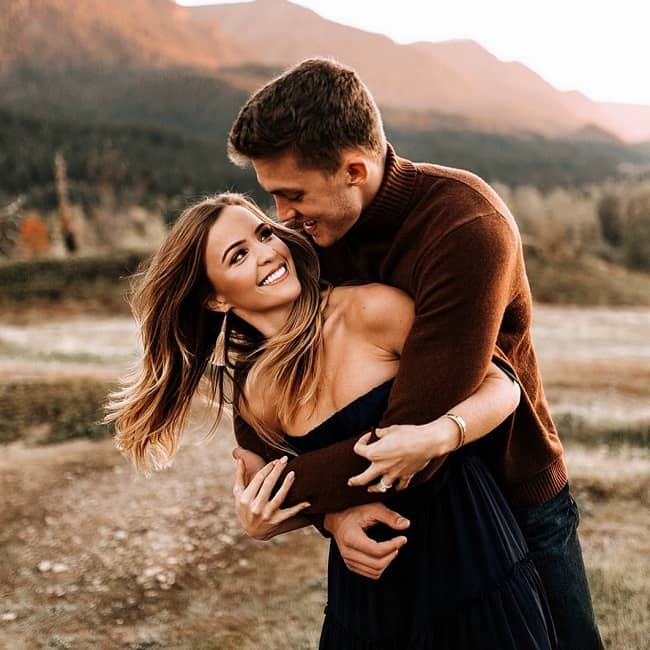 Caption: Meyers Leonard posing for a photo with his wife, Elle. Source: Instagram

Meyers Leonard’s listed/registered height is 7 feet or 2.13 meters and his registered weight is 260 lbs or 118 kgs. Likewise, while playing basketball, Meyers’s wingspan is 2.21 meters. Other than this, there is no further information regarding the basketballer’s other body measurement details. Similarly, Meyers has light brown hair and eyes of the same color.

Talking about the basketballer’s social media visibility, Meyers Leonard is available on Instagram under the username @meyersleonard. The basketballer has earned more than 370k followers on this account as of February 2021. 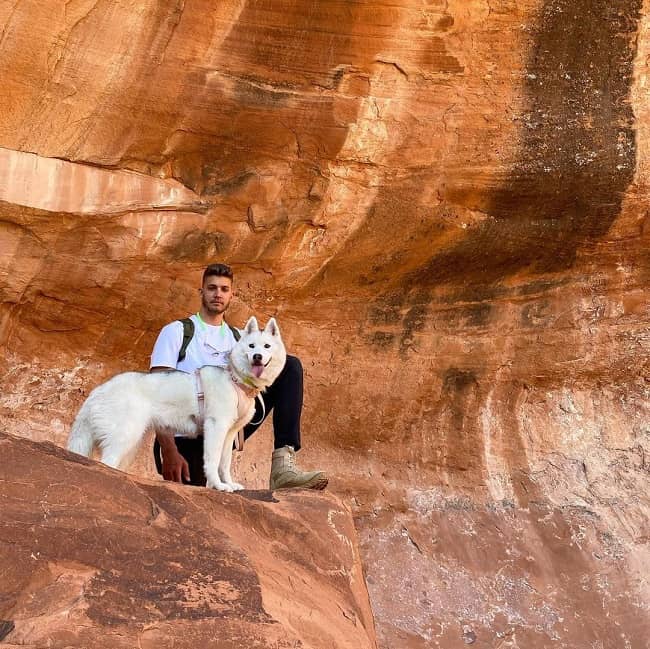 We can also find him on Twitch as @MeyersLeonard. He also joined Twitter in September 2009 and so far has over 176.9k followers on his @MeyersLeonard account. Moving on, Meyers Leonard has a net worth of around $50 million dollars through his basketball career, brand endorsements, etc.