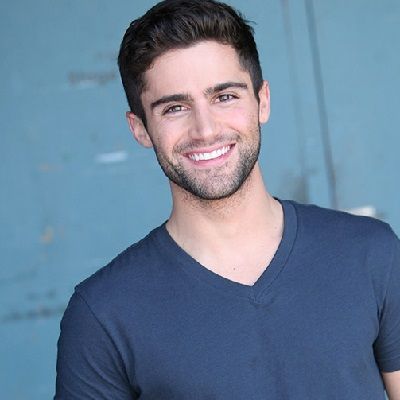 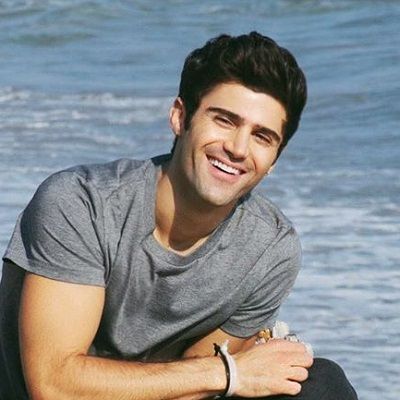 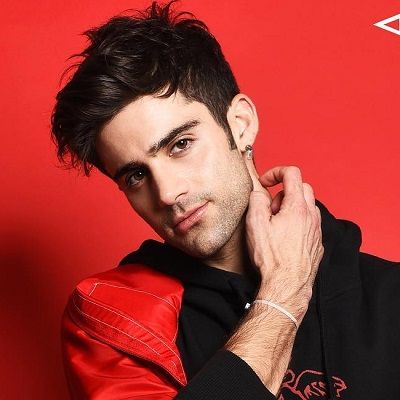 Max Ehrich is an American actor popular for his role in “High School Musical 3”, “iCarly”, and “Ugly Betty”, among others. Max Ehrich is also a singer and dancer. Most recently, Max came to limelight after confirmation of his romantic relationship with the prominent American singer Demi Lovato through his Instagram Live session.

What is the relationship status of Max Ehrich? Who is he dating?

At present, Max Ehrich is in a romantic relationship with American singer Demi Lovato. Prior to their recent confirmation, there were many rumors of the duo dating but the lovers never exclusively confirmed any rumors surrounding them.

However, in Max’s recent Instagram Live, Demi Lovato sent fans in a frenzy of excitement. She accidentally confirmed dating rumors with Max when she crashed his Instagram Live for a split second. Though Demi Lovato’s appearance was very short, she is clearly seen pulling a blanket over her head in embarrassment after she was caught.

In the video, Demi Lovato walks into the room while Max visibly mouthed the words ‘I’m on live’ in her direction. But she didn’t hear him as he spoke very softly. Demi Lovato landed right in front of her boyfriend, smack dab in the camera view.

When Demi got too close though, Max again whispered ‘I’m on live’ and this time she quickly pulls the blanket over her face and scurries out of view. We can also hear her laugh of embarrassment. Since then, the lovebirds’ adorable exchange has left fans over the moon.

Prior to this, Max sang Coldplay’s “Yellow” on Instagram, captioning the clip: “4D🌹<3.” Now fans certainly think that “D” stands for Demi. Moreover, there’s a photo Max posted showing him cuddling with Demi’s dogs while laying on her couch.

The duo was also a part of several dating rumors for a long time. Right from their reported grocery run on March 15 together, to Instagram flirting, and even socially isolating together. 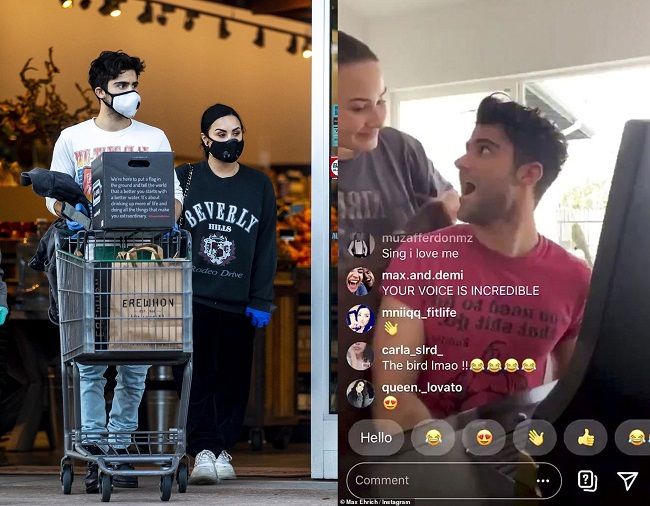 Caption: Max Ehrich was seen with Demi Lovato during quarantine in 2020. Source: (L) The Sun and (R) GeoTV

Max has also been linked with the American bikini model Sommer Ray in October 2017. The two met each other through actor Bella Thorne, their mutual friend. The duo also together attended the ‘Happy Death Day’ premiere held at Universal Studios, Hollywood in October 2017. Since then, the duo was seen together on several occasions.

Previously, Max Ehrich also dated Veronica Dunne for three years before calling it quits in July of 2017. Veronica is an American TV actress popular for Kickin’ It, Austin and Ally, and The Suite Life on Deck among other shows. Moreover, Max also dated Jennette McCurdy, also an American TV actress popular for shows like iCarly, Sam & Cat, Fred: The Movie, and Swindle among many.

Max Ehrich was born on 24 June 1991 and he is currently 28 years old. His hometown is Marlboro Township, New Jersey. Max has yet to disclose detailed information about his family members. Nevertheless, he once tagged his mother on one of his Instagram posts and his mother’s name is Rhonda Green Ehrich. She dedicated her life to teaching kids with special needs.

Further, on the same post, Max also mentioned that he has a brother but he didn’t mention his name. Moreover, there is information that his brother’s name is Matthew Ehrich and his father is Bruce Ehrich. His father is a Health and Safety Regional Manager whereas an Investment Banker.

Max also has not talked much about his educational journey and childhood. Nonetheless, he studied at Marlboro Middle School for further studies. Later, Max joined the French Woods Performing Arts summer camp in Hancock, New York at the age of 8. Moreover, Max is an Ameican national whereas his ethnicity is unknown. 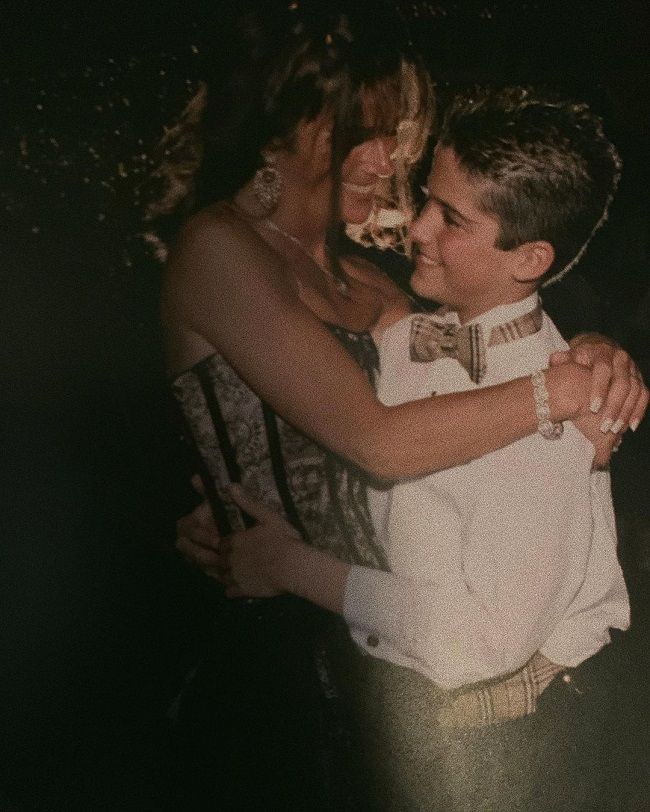 Caption: Max Ehrich and his mother in an old photo. Source: Instagram

Max Ehrich did everything he could to protect himself after allegedly having a gun pulled on him by an obsessed realtor. He also explored legal options and thought of beefing up his security. The actor was spotted on Friday afternoon leaving a Los Angeles law office with a massive bodyguard in tow. It was the first first time he was seen in public since going into hiding.

According to TMZ, Max was scared to death because a prominent real estate agent reportedly became obsessed with him and brandished a gun in a fit of rage. Max looked at property in the Los Angeles area with the realtor and the other man became infatuated with him, as per sources. TMZ also revealed that the realtor became sexually aggressive at one point and got mad when he was rebuffed.

Police also got involved in the case and Max took no chances. On Friday, he took to social media to tell his one million followers that he had been talked on Instagram by this person month prior to the incident. He said:

“Social media is a great tool, but please be careful about sharing your locations… unfortunately there are creepy people out there.”

Max Ehrich is an American actor, singer, and dancer who is best known for his roles as Fenmore Baldwin in The Young and the Restless, Hunter May in Under the Dome, and Freddie Ridge in The Path. His latest work is the role of Brett in American Princess since 2019.

Talking in more detail, Max made his film debut starring in One Easy Job released in 2004. He then played the supporting role as the principal dancer in High School Musical 3: Senior Year. Moving on to television, Max Ehrich was a recurring guest star in Ugly Betty Season 3. He played the role of Randy. He then starred in the 2009 Lifetime Original Movie The Pregnancy Pact playing Jesse Moretti. For this, Max performed alongside Thora Birch, Camryn Manheim, and Nancy Travis.

Additionally, Max filmed two pilots for CBS in 2010 and has since shot another pilot as a recurring guest star for the new Country Music Television sitcom, Working Class. It also stars Melissa Peterman. Among many current TV projects, Max recently played the role of Adam in iStart A Fan War, a TV movie for the Nickelodeon show, iCarly.

In the year 2012, Max joined the American CBS Daytime soap opera The Young and the Restless playing the character Fenmore Baldwin. Moreover, in 2014–2017, Max appeared in series like Under The Dome, The Path, and Sweet/Vicious. Max Ehrich also had a recurring role on the short-lived Nickelodeon show 100 Things to Do Before High School. 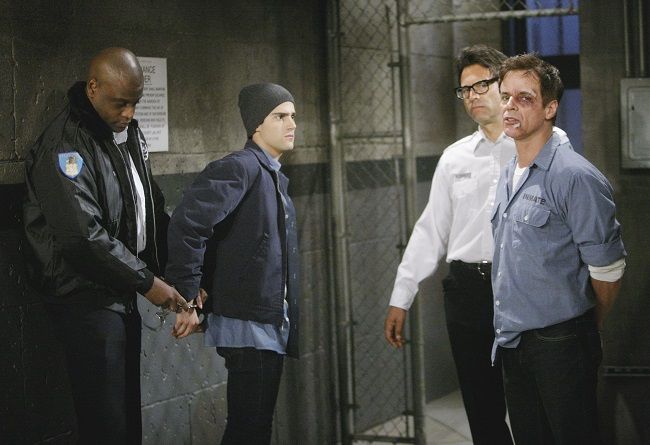 Caption: Max Ehrich playing the role of Fenmore Baldwin in The Young and The Restless. Source: CBS

Max Ehrich has received several award nominations for his amazing performances. One of them is the Daytime Emmy Award for “Outstanding Younger Actor in a Drama Series” for his role in The Young and the Restless from 2013 through 2016. But sadly, he didn’t bag them.

Talking about the actor’s body measurements, Max Ehrich stands tall at a height of 5 feet 7 inches and weighs around 61 kgs. Similarly, his chest-waist-biceps size is 40-32-16 inches respectively. Max wears shoe size 9 and has dark brown hair and hazel eyes. 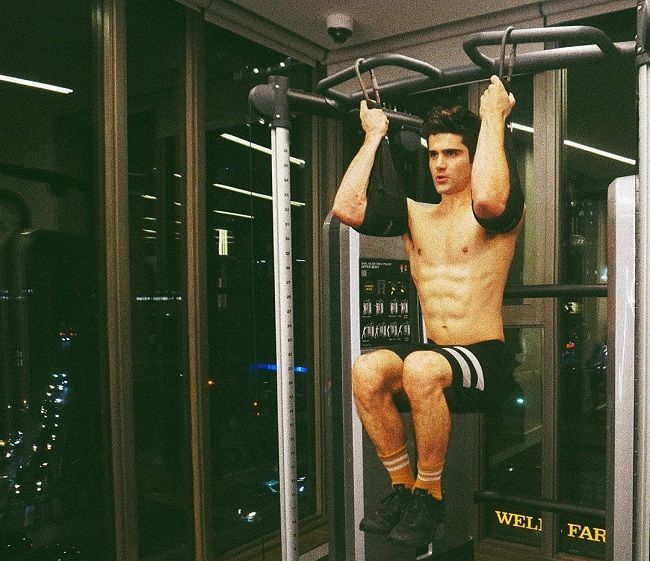 Max Ehrich is pretty active on social media platforms. He joined Twitter in April 2009 and so far has 168.3k followers. Moreover, he has 1.6 million followers on his Instagram handle with 900 posts as of April 2020. Similarly, he also has a Facebook page with 10.6k followers.

Moving on, Max Ehrich’s net worth estimation is around $1 million to $5 million. He earns through his career in acting, singing, dancing, and much more.