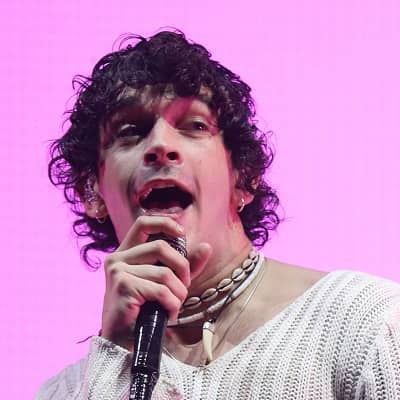 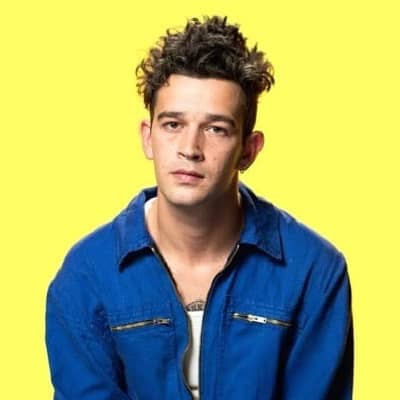 Matty Healy is a British personality who is famous as the lead vocalist, guitarist, and also a pianist of the Indie rock band “The 1975” which is based in Manchester. Matty Healy is the main songwriter of the band and often tours around several countries such as Europe and the USA.

The musical performer was born on 8th April 1989, in London, United Kingdom. Matty is a British native and belongs to the Caucasian ethnicity. His birth name is Matthew Timothy Healy and follows Christianity.

Similarly, Healy as of 2021 must be thirty-two years old and his sun sign is Aries. The name of his parents is their father, Tim Healy who is a TV actor, and his mother, Denise Healy who is a soap opera actress.

Both of his parents were a part of show business or we can say they are famous actors, which inspired him to the musical field at a very young age.

He also has a sibling and his name is Louis Healy. Together they spend their childhood in Newcastle and Cheshire. In his younger days, his parents were living fast lives with numerous socializing together with other actors and musicians.

When he was just four years old, he learned to play the drums with his father. However, his parents parted their ways in the year 2012 after which his mother began dating Lincoln Townley.

They even got married. Moreover, it was his brother, Louis who was also motivated by him and as of now is performing some music on YouTube. 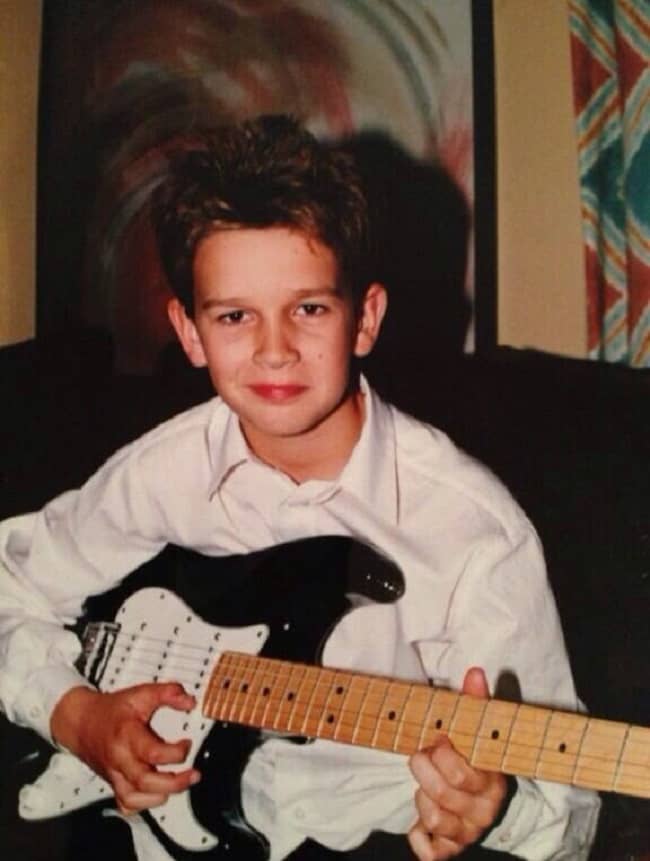 Caption: Matty Healy when he was young (Source: Pinterest)

Regarding the musician’s education, he went to Wilmslow High School. In the year 2004, he was there that he began jamming together with his friends. They first started it by playing punk which is a rock and pop cover.

After that, they began writing their music after they were around fifteen years old. Healy became their main songwriter who was creating amazing lyrics and bringing their style.

The band has even performed under the names of ‘Me and You Versus Them’, ‘Drive As I Do’, ‘TALKHOUSE!’, and also ‘The Big Sleep’.

In the end, the band fixed their name as ‘The 1975’ and their manager is Jamie Oborne. However, he was not doing well in his school but completed 3 GCSEs. The musician was schooling as a hindrance to his music and didn’t want to study anymore.

Then, his mom insisted he join a Music College, but they also didn’t last for just 3 months. After that, he was getting busy writing songs and was also doing a job in a Chinese restaurant to have some pocket money.

At this time, he was involved in a cocaine problem that became uncontrollable.

Matty Healy has a good net worth of around $5 million which he has been earning from his hard work and his creations all these years. As a lead singer and guitarist of the band “The 1975”, he has been collecting a good amount of wealth together with fame.

He together with his band members goes on tour and earns by performing in various places and events. Moreover, they even earn some money from their appearances in some interviews, and shows, also from collaborations as well.

At first, Matty Healy is in a long-term romantic relationship with the model, Gemma Janes however they broke up in the year 2014. Once there was a rumor that he had a link with the singer Taylor Swift. However, their relationship didn’t go further than just a colleague.

As of now, he seems to be single and enjoying his singlehood. He testifies to be an atheist and a huge supporter of the British Humanist Association.

However, he prefers religious iconography and has a Christian emblem over his bed. The singer is also quite sincere about his past cocaine addiction. 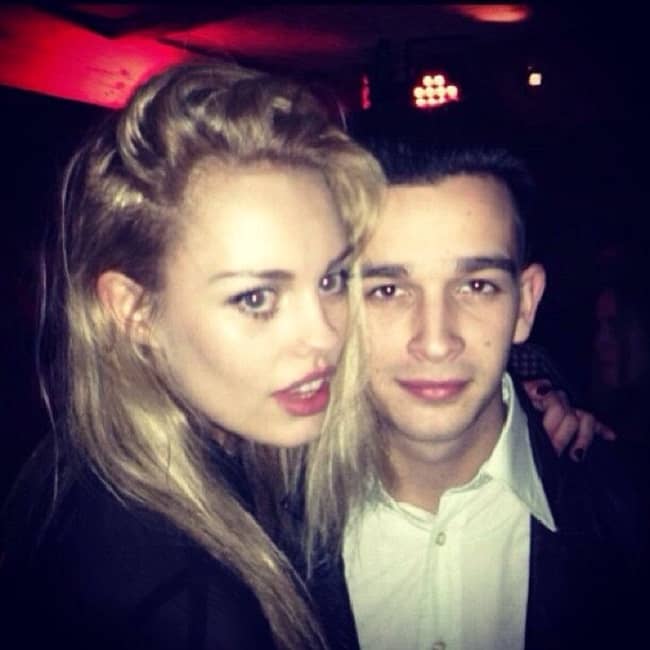 Matty Healy at first used to play the drums for their band, ‘The 1975’. Then, he took over the position as a lead singer and guitarist after their first lead singer was out of the band.

His band’s 1st EP, ‘Facedown’, was out in the year 2012 and was publicized on national radio, together with the lead single, ‘The Cit. It became a hit on BBC Radio 1. In the same year, their 2nd EP, ‘Sex’, was out after coming out with the single ‘Chocolate’.

They then came out with their self-titled 1st album in the year 2013. The album consists of a remake of their number ‘sex’ which was first out on Zane Lowe’s BBC Radio 1.

It was then out on YouTube and helped the band to gain a huge number of fans. After that, they made an international tour of Ireland and the USA to get more attention for the album at the same time.

Then, the band went on a tour to the UK and performed at various festivals adding performances in the Royal Albert Hall. Then, the band was asked to perform together with the ‘Rolling Stones in Hyde Park in July 2013.

After that, the band came up with their 2nd, ‘I Like It When You Sleep, For You Are So Beautiful Yet So Unaware Of It’, also with their 3rd album, ‘Music for Cars’. In the year 2016, the band released their famous single ‘The Sound’ as a music video in a digital way. 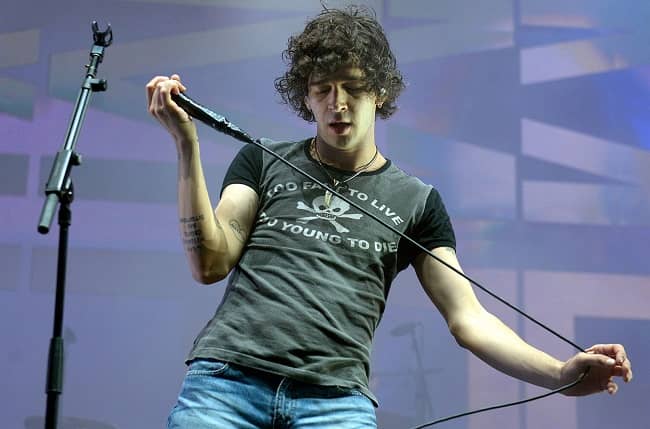 Also, the size of his biceps is 12.5 inches and he wears a shoe of size 11 (UK). Moreover, Healy has a tattoo on his chest and a pair of black eyes with black hair.

The musician has a slim body type with a fair complexion as well. Healy is recognized for sometimes drinking wine on stage and wearing black clothes very often, with knee ripped-off jeans.

The musician is quite active on the social media platform as it is the most effective way to get more fans and followers. He has an Instagram account where he has 1.3 million followers and a Facebook page, where he has more than 38 thousand followers.

However, he does not have a Twitter account as of now. But on his band’s YouTube channel, they have managed to gain 2.79 million subscribers as of March 2021.

Mathy’s social media accounts are not just full of his images but also of his work and the more things he likes to post.