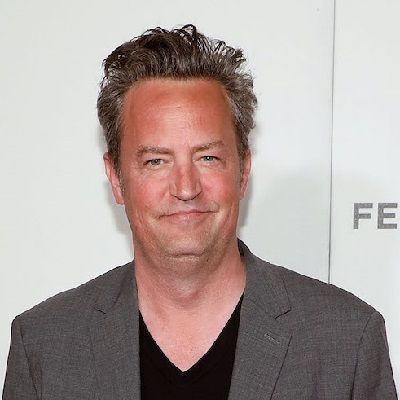 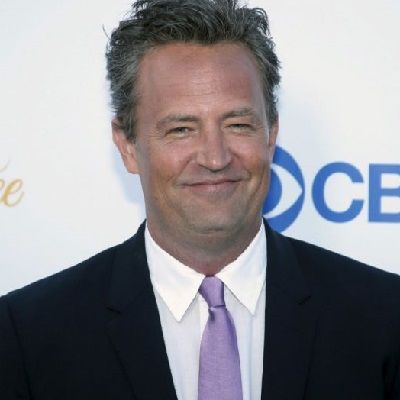 Matthew Perry is a Canadian-American actor. Matthew Perry is famous for the role-play of Chandler Bing in a TV series known as F.R.I.E.N.D.S. Furthermore, he is also a co-creator and co-writer of Mr. Sunshine.

Matthew Perry is 53 years old. He was born on August 19, 1969, in Williamstown, Massachusetts, the U.S. He is the son of Suzanne Marie Morrison(mother) and John Bennett Perry(father) who was an actor. They had divorced a few months after his birth. Then his custody was given to his mother who lived with his mother in Ottawa, Canada.

He grew up with a brother: Willy Morrison, and four sisters: Madeleine Morrison, Caitlin Morrison, Emily Morrison, and Mia Perry. Furthermore, he started living with his father in Los Angeles after fifteen. Then, he started keeping his passion for acting. Moreover, he belongs of Canadian-American nationality and mixed ethnicity of French-Canadian, English, Irish, German, and Swiss-German.

Talking about his educational history, he attended Rockcliffe Park Public School and then went to Ashbury College. After that Perry intended to enroll at the University of Southern California but also had a keen interest in acting so when he was offered a leading role in the television series boys will be boys, he chose acting as his career.

Matthew Perry has a keen interest in acting as well as tennis. So, he also became a top-ranked junior player, categorized as a 17th ranked nationally in the junior singles category and third in the doubles category.

Likewise, he moved to Los Angeles. He started his acting career with Boys Will Be Boys. His first movie debut was A Night in the Life of Jimmy Reardon. Then, he also appeared in an ample number of movies like The Whole Nine Yards, Fools Rush In, and Birds of America. He has also made an appearance in several series such as Dreams on, Just The Ten Us, Empty Nest, Sydney, and many more. Perry has also made an appearance in the huge success of comedy-drama Friends. 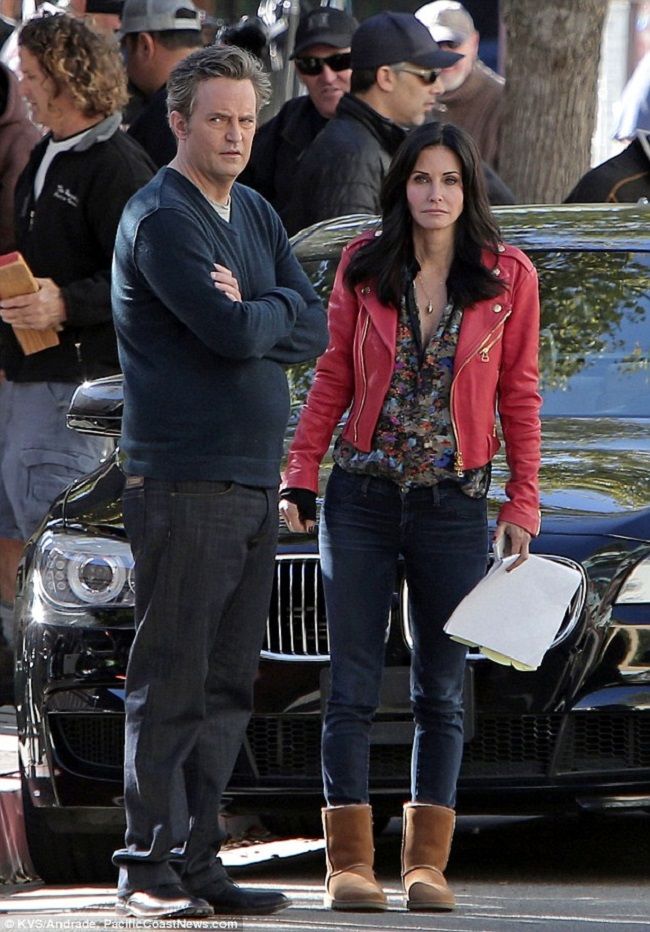 Caption: Matthew Perry with his co-actor Courteney Cox in the set of Friends (Source: dailymail.co.uk)

Moreover, he also played the lead role in a new production of his play The End of Longing, which premiered on February 11, 2016, at the Playhouse Theatre in London. In March 2017 he again reprised his role as attorney Mike Kristeva, in The Good Fight, a sequel show to the CBS drama The Good Wife. He has also played a voice role in a video game named New Vegas.

In 2012, he guest-starred on the CBS drama The Good Wife, as attorney Mike Kristeva. And he reprised his role in the fourth season in 2013. In 2014, he made his British TV debut in the one-off comedy program The Dog Thrower. The show aired on May 1 as part of Sky Arts’ Playhouse Presents. He portrayed “a charismatic man” who delighted observers by throwing his dog in the air. From 2015 to 2017, he acted in, co-wrote, and served as executive producer of a revival of the sitcom The Odd Couple on CBS. Further, he even played Oscar Madison opposite Thomas Lennon as Felix Unger.

Likewise, he played the lead role in a new production of his play The End of Longing. It premiered on February 11, 2016, at the Playhouse Theatre in London. Later in 2017, he appeared as Ted Kennedy in the mini-series The Kennedys: After Camelot.

Perry has received many awards for his hardworking acting career. He has facilitated numerous awards Screen Actors Guild award, Outstanding Performance by an Ensemble in a Comedy Series, and editors’ awards for Friends. Moreover, he also got awarded as the best lead actor in a television movie for The Ron Clark Story. He has also been nominated for many other awards such as the best supporting actor in a series, Favourite Television Actor, and many more. 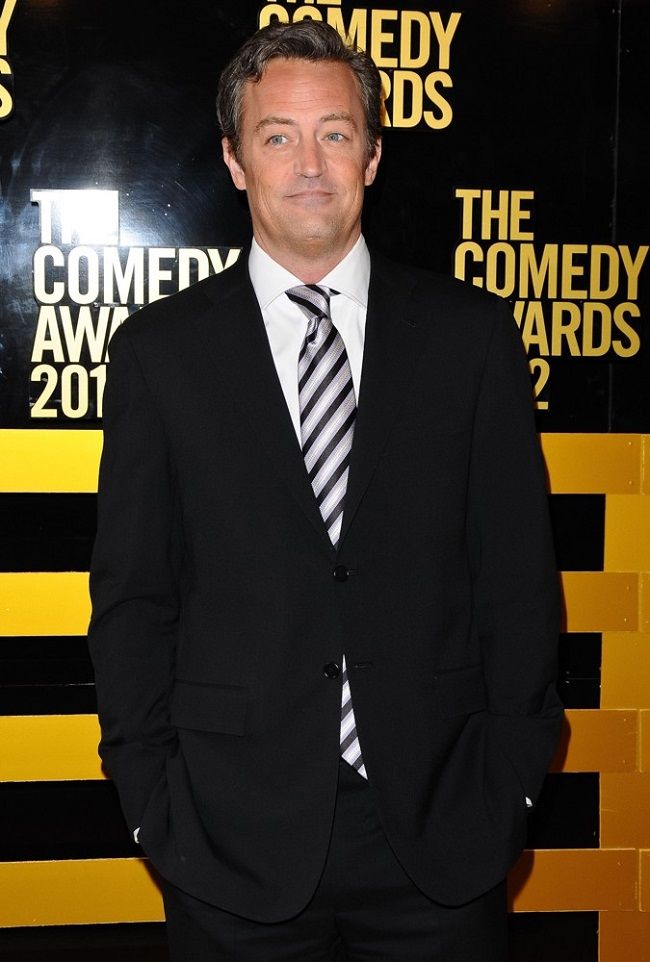 Perry has accompanied a decent sum of money in his professional acting career. His estimated net worth is around $80 million. The actor Matthew Perry lives in a Los Angeles penthouse on the 40th floor of The Century. It is a 42-story luxury condominium in the heart of Los Angeles.

Reflecting on Matthew Perry’s relationship status, he is currently single. He is happy living a single life and busy focusing on his career. It seems he hasn’t found his true love connection.

In 1997, Matthew Perry completed a 28-day program for a Vicodin addiction. His weight keeps on changing drastically over the next few years and dropped down to 145 pounds (66 kg). Similarly, he lost 20 pounds (9.1 kg) in 2000 due to pancreatitis.

Again, he went to rehab in February 2001 for addiction to Vicodin, methadone, amphetamines, and alcohol. During his shoot of Sara in Texas, he suffered severe stomach pains and went to Los Angeles to check into Marina del Rey’s Daniel Freeman Hospital. His publicist, Lisa Kasteler, committed his rehab stay. Later, he opened up about his addiction issues and doesn’t remember three years of his time on Friends, “somewhere between seasons three and six.

In 2018, he was rushed to the hospital with a gastrointestinal perforation (ruptured bowel).

There were many rumors regarding his professional as well as personal life. He has been through sex, drugs, and medical crises exposed on his 50th birthday. Moreover, he was also rumored to be in a relationship with her co-actor Courteney Cox. But the rumors turned out to be not true.

Matthew has an amazing personality and a stunning body. He has a height of  6 feet tall and weighs around 66 kg. Moreover, he has brown color eyes and salt paper hair. 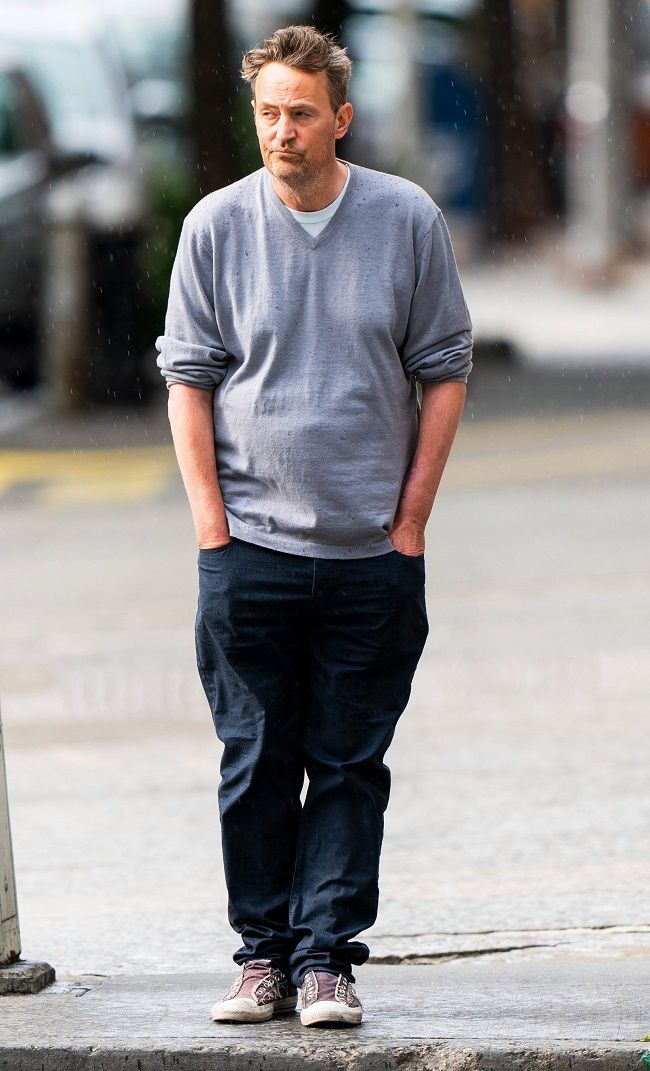 Caption: Matthew Perry looks downcast as he goes for a walk in the rain (Source: The Sun)