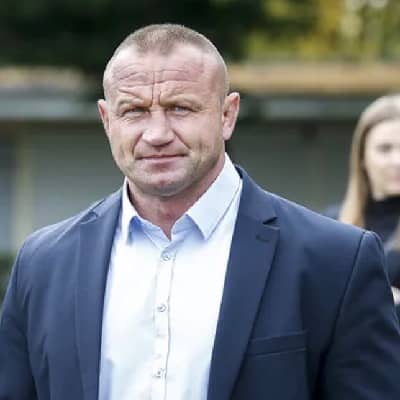 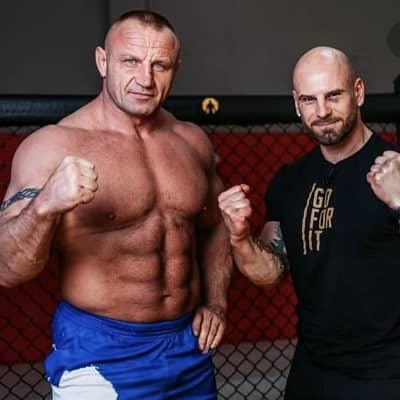 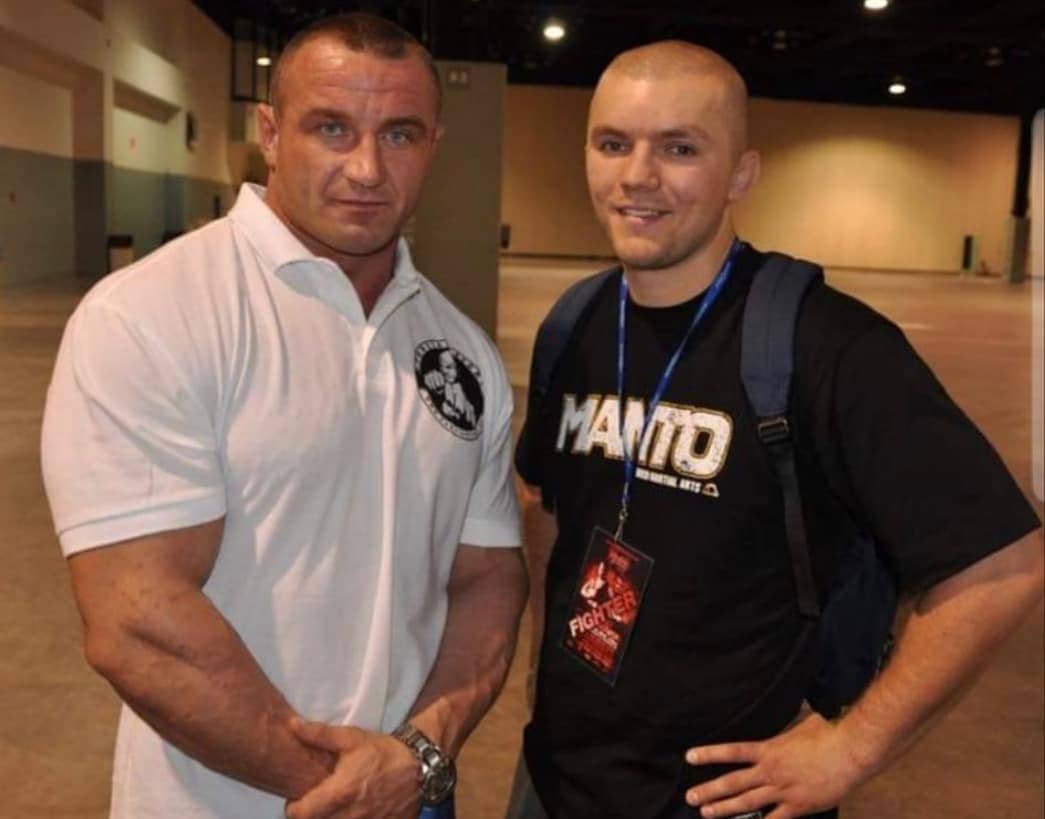 Mariusz Pudzianowski widely known as Pudzian and Dominator is a polish businessman, former strongman competitor, and currently a mixed martial artist. Mariusz Pudzianowski is widely considered to be the greatest strength athlete of all time. Currently, he is ranked #3 in the heavyweight division of KSW.

Mariusz Pudazianowski was born on 7th February, 1977, in Biala Rawska, Poland. He is 45 years old as of 2022.  He was born to parents Wojciech Pudazianowski and Maria Pudaziannowski. His father was a weightlifter who later became a strength coach. Mariusz was interested in sports and martial arts from an early age. He learned Kyokushin karate at the age of 11. He holds the 4th kyu green belt in Kyokushin karate. Mariusz started strength training at the age of 13.

Mariusz started boxing at the age of 15, he quit boxing after seven years. At the age of 16, he took part in the polish weightlifting championship in the benchpress event whilst training in combat sports. He did not return to the competition for 2 years. On May 27, 2008, Mariusz completed a master’s degree in international relations.

Mariusz was sentenced to prison for 19 months in Lowicz for assault in 2000. He later revealed in an interview that he wanted to stop the local mob. Mariusz instead got accused of assault and jewelry theft. He was incarcerated for 19 months in prison. He missed the 2001 WSM.

At the age of 21, he finally put martial aside to fully focus on the strongman competition. He also won Poland’s Strongest Man and debuted at the 2000 World’s Strongest Man Contest where he finished 4th behind Magnus Samuelsson, Svend Karlsen, and eventual winner Janne Virtanen. Mariusz made his return in 2002. Many had written him off from winning the competition but to everyone’s surprise, he won the 2002 World’s Strongest Man title.

The following year in 2003, he won the 2003 World’s Strongest Man title with the largest lead of 20 points. In March 2004, he also won the Strongman Super Series World Champion. He finished 3rd in WSM but later got disqualified after he failed to adhere according to Organization’s Strongman Health policy. He also had to return the prize money. Additionally, Mariusz got banned from the competition for a year.

The IFSA( International Federation of Strength Athletes ) decided to part away from WSM after working together for a decade. IFSA received a new sponsor and started to hold its own competition. Mariusz won three WSM titles from 2005 to 2009. Mariusz declared in an interview that the 2009 World’s Strongest Man Competition would be his last competition as he required different training for MMA. 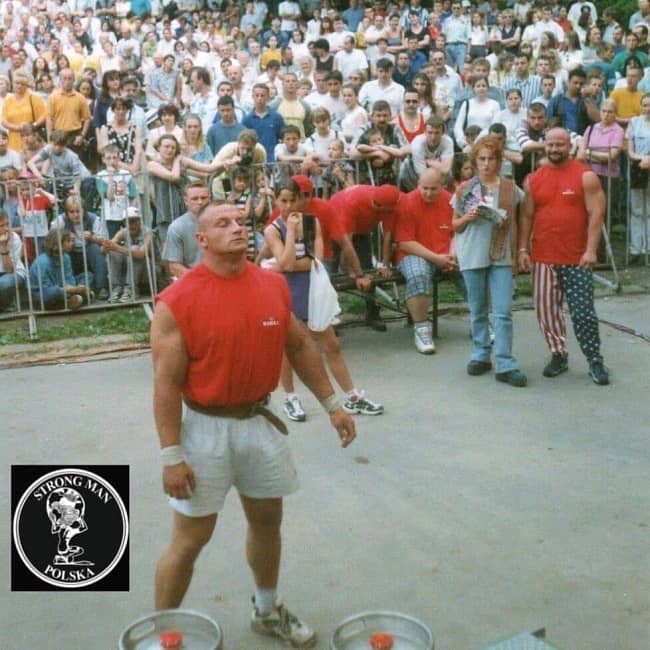 After winning everything in Strongman, Mariusz took up a new challenge. Mariusz Pudziannowski signed with polish MMA promoter- KSW (Konfrontacja Sztuk Walk). He made his debut on December 11, 2009, in Warsaw, Poland against  Marcin Najman. He won the fight only in 43 seconds by TKO and bagged $70000 from the fight.  On May 7, 2010, Mariusz fought Yusuke Kamaguchi. He won the fight via unanimous decision.

On May 21, 2010, he fought against former two-time UFC Heavyweight Champion Tim Sylvia. Slyvia finished the fight via TKO at 1:43 of the second round. Following the loss against Slyvia, Mariusz fought former heavyweight boxer and kickboxer Eric Esch, also known as Butterbean. He won the fight via submission in 1st round. He fought James Thompson at KSW XVI and lost the fight after James performed an arm triangle on him.

Mariusz went to train under America’s top MMA camp- American Top Team. After the return, he faced James Thompson for a rematch and won the fight by majority decision. The win was controversial as Thompson dominated Mariusz every round. The KSW overruled the decision and declared no contest. On May 23, 2015, Mariusz fought Rolles Gracie Jr in KSW 31 at Gdansk, Poland. Mariusz won the fight via KO in 1st round.

He faced Szymon Kolecki at KSW 51 .Mariusz suffered a leg injury in the first round and lost the match. He made his return to KSW after 15 months. Mariusz was scheduled to face undefeated Senegalese heavyweight Serigne Ousmane. On the day of the match, Ousmane suffered an acute appendicitis attack and was replaced by Serbia’s Nikola Milanovic on short notice.

He KO’ed Nikola in 1st round. On June 5, 2021, he faced a one-time KSW tournament winner Lukasz Jurkowski at KSW 63: Crime of the Century. He won KO’ed Lukasz in 3rd round. KSW rescheduled the fight between Mariusz and Ousmane. The bout took place at KSW 64 on October 23, 2021. Mariusz knockout Ousmane in 18 seconds of 1st round. 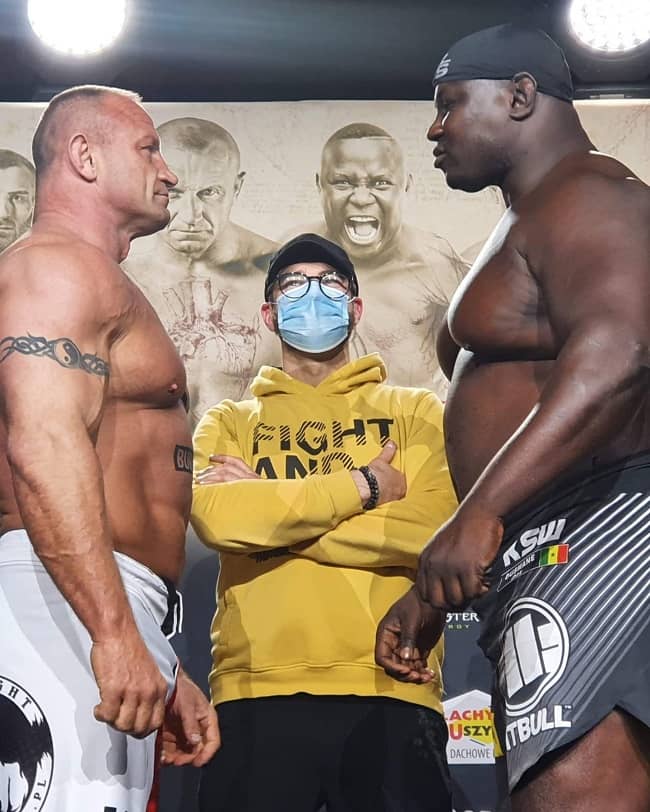 Caption: Mariusz and his opponent during the Faceoff Source: Instagram

Business and other Ventures

In an interview, Mariusz said he doesn’t earn much from Strongman and MMA and he only does it as a hobby. He has a school for bodyguards and Mariusz also owns a truck cargo company named Pudzianowski Transport. He also makes investments in real estate. Mariusz Pudzianowski has also acted in several films such as Neighborhooders, Nie ma takiego numeru, Faceci do wziecia etc.

He also performed as a singer for his brother Krystian’s musical band called Pudzian Band. They released their 1st single called Zdobyc Swiat in 2006 and a full album called Dawaj na ring. Mariusz took part in the 7th season of Dancing with the stars. He lost to actress Magdalena Walach in the final.

Mariusz earned his career earnings through strongman, MMA, business, and appearing in tv shows and films. He owns Bodyguard’s school and a truck cargo company. His total net worth is $18 million.