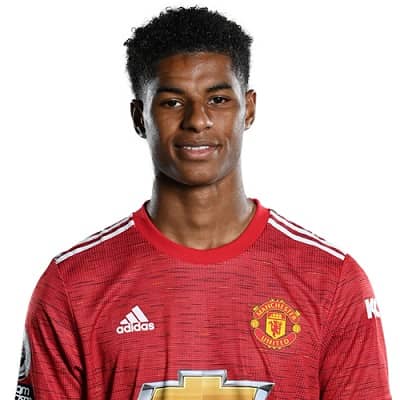 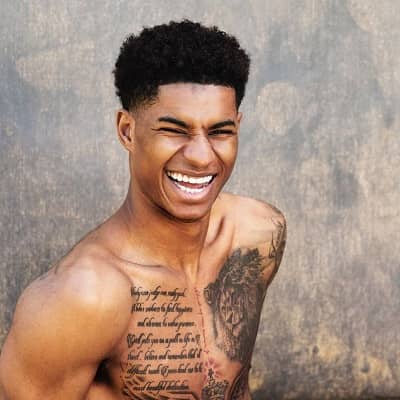 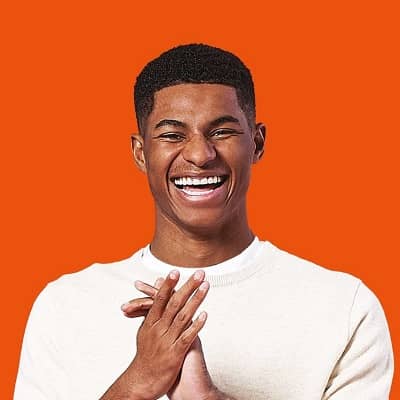 Marcus Rashford is a young and talented professional English football player. Marcus Rashford is famous for playing forward for the English national team and Manchester United. The young footballer also recently became a Member of the Order of the British Empire (MBE). 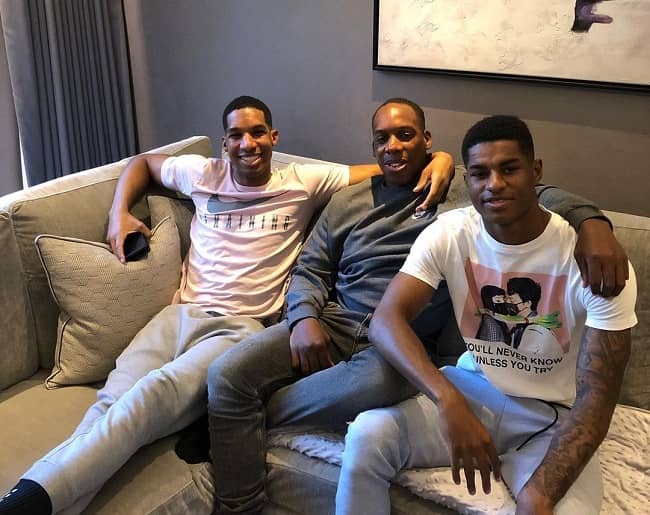 Caption: Marcus Rashford posing for a photo with his brothers. Source: Instagram

Marcus Rashford was born on 31 October 1997 and he is currently 23 years old. He hails from Manchester, England, and his zodiac sign is Scorpio. Marcus grew up in the Wythenshawe area of Manchester.

Talking about his family, Marcus is of Kittitian descent. Marcus’s grandmother was born on the West Indies island of Saint Kitts. Likewise, he comes from a working-class family. Marcus’s mother is Melanie Maynard. Melanie is a single parent who often worked multiple jobs to feed their family. She even skipping meals herself at times to ensure Marcus and his siblings ate.

Moreover, Rashford has 4 older siblings. Two of them are his brothers Dwaine Maynard and Dane Rashford. Both Dwaine and Dame went on to represent Marcus professionally. On the other hand, his two sisters are Chantelle and Claire.

This is where “United” has sent their academy players since the year 1998. This school is also located close to their Carrington training ground. At Ashton-on-Mersey School, Marcus studied for a Business and Technology Education Council (BTEC) National Diploma in Sport. 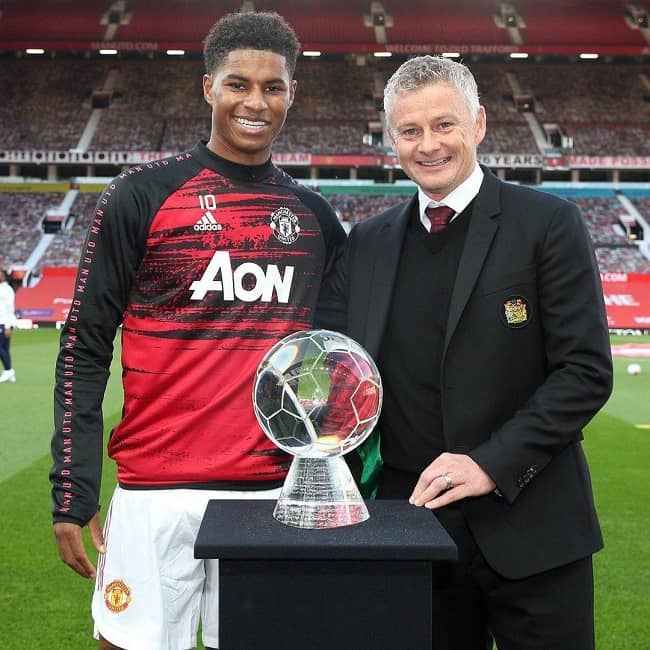 Caption: Marcus Rashford posing for a photo with a trophy. Source: Instagram

Professionally, Marcus Rashford is a football player. Marcus plays for the Premier League club Manchester United as well as the England national team. He plays as a forward for these teams.

In fact, Marcus has been a footballer for Manchester United from the young age of 7 years. During his first-team debut against Midtjylland in the UEFA Europa League, Marcus scored 2 goals. It was back in February 2016. Likewise, the young player also scored 2 goals during his Premier League debut against Arsenal. It was only 3 days after the aforementioned game.

Likewise, Marcus also scored in his 1st Manchester derby. It was also the same care on the young player’s EFL Cup and UEFA Champions League debuts. With Manchester United, Marcus has so far won the FA Cup, EFL Cup, FA Community Shield, as well as Europa League at such a young age.

Additionally, Marcus scored on his England debut in May 2016. This recorded Marcus as the youngest English player who scored in their 1st senior international match. The young footballer played at the UEFA Euro 2016. He was the tournament’s youngest player. Marcus also played for the national team of England at the 2018 FIFA World Cup. 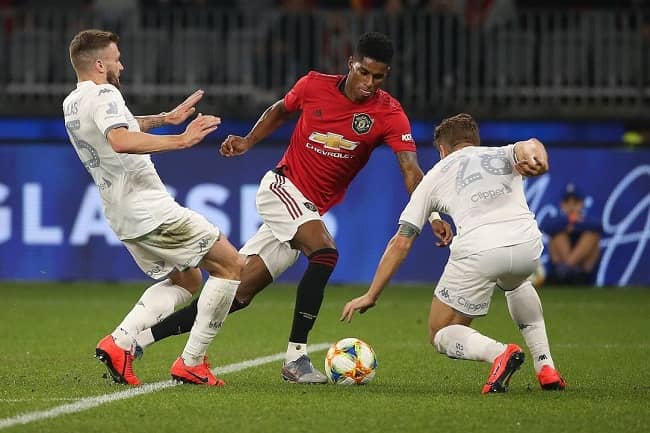 Besides playing football, Marcus is a campaigner at such a young age. Marcus campaigns against homelessness and child hunger in the United Kingdom. People have also praised the young player for using his platform to be a political activist as well as a philanthropist to drive societal change. For his efforts, Marcus has also received recognition from institutions and organizations both in and out of the sport. Some campaigns he has worked on include the Food poverty campaign, Universal Credit campaigning, and Literacy campaign among others.

Talking about the young footballer’s awards and honors, Marcus Rashford received the award for Special Recognition at the 2020 Pride of Britain Awards. It was in recognition of Marcus’s campaign against child food poverty. Similarly, the local street artist Akse honored the young footballer with a mural of him in Withington. It is a suburb of Manchester where Marcus lived at the time he signed for Fletcher Moss Rangers. 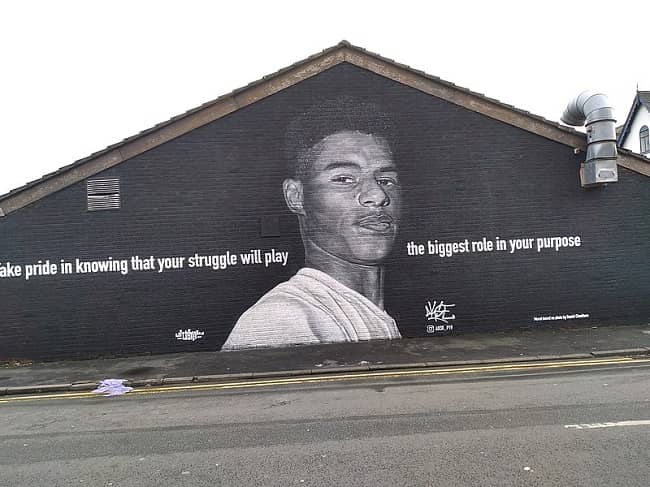 Caption: Marcus Rashford being honored with his own mural by local artist Akse. Source: Instagram

Similarly, The Voice named Marcus on the “Football Black List”. It is an initiative designed to celebrate influential black people in football. Likewise, The Voice is the only British African-Caribbean newspaper in the United Kingdom. Further, Marcus was also named “Campaigner Of The Year” at the 2020 GQ Men Of The Year awards.

Of all his honors and awards, the most honorable one is being a Member of the Order of the British Empire or MBE. It is awarded by the British Queen Elizabeth II herself. He received this honor for urging the British Prime Minister to continue funding meals for poor children over the summer holidays during the coronavirus pandemic.

Marcus Rashford was in a romantic relationship with Lucia Loi for 8 long years. However, recently in early 2021, the childhood sweethearts secretly separated due to lockdown pressures as per reports. His ex-lover has been continuously supporting Marcus at football games over the years. She even attended the 2018 World Cup in Russia. Despite the news of the young couple’s split, people still like to believe that Marcus and Lucia might reconcile after some time apart. As of now, she is single right now. 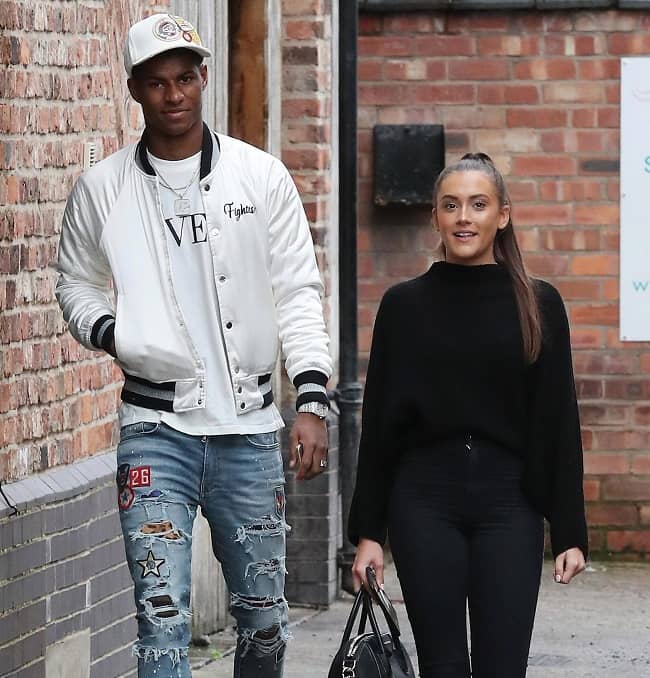 Marcus Rashford stands tall at an approximate height of 1.8 meters or 5 feet 9 inches and his weight is around 70 kgs. Likewise, Marcus’s chest-waist-bicep measurements are 41-31-14 inches respectively. Further, the young footballer’s eyes are dark brown colored and also has hair of the same color.

Talking about his social media presence, Marcus Rashford joined Twitter in May 2016 and so far has over 4.5 million followers on his @MarcusRashford account. Likewise, his username on Instagram is @marcusrashford in which the footballer has over 10.1 million followers as of May 2021. Moving on, the young Manchester United player has a net worth estimation of around $80 million US dollars.