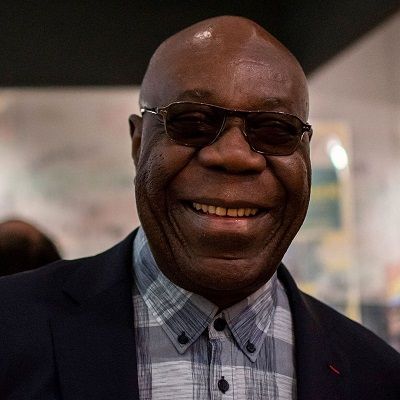 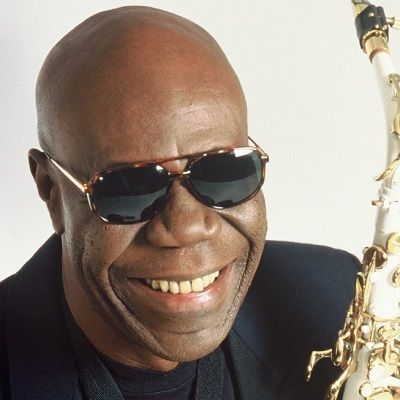 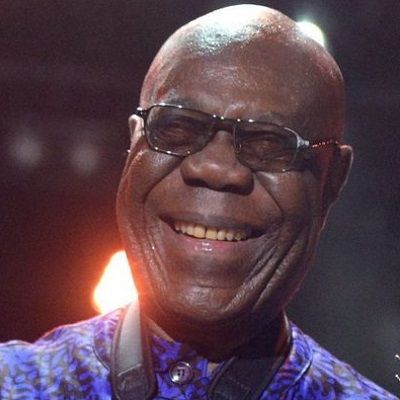 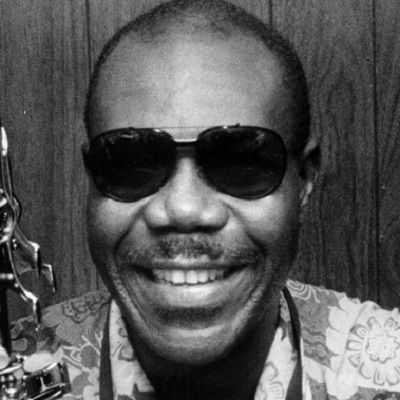 Did he pass away catching the CoronaVirus?

Jazz legend Manu Dibango has died in Paris aged 86 after catching coronavirus in a Parisian hospital, according to a message on his official Facebook page on Tuesday, written in French.

“It is with deep sadness that we announce the loss of Manu Dibango, our Papy Groove, who passed away on 24th of March 2020, at 86 years old, further to covid 19”

Further, they held his funeral services in strict privacy followed by a tribute when possible, Tuesday’s announcement said. The funerals in France are limited to 20 people, which consists of the closest circle of the deceased. It is due to the lockdown of the country to try and control the spread of COVID

He was one of the pioneers of Afro-jazz. He also melded funk and traditional music from Cameroon. Moreover, Manu was also popular under the nickname “Papy Groove”.

Manu Dibango was born Emmanuel Dibango N’Djocke in Douala, Cameroon on 12th December 1933. However, he died at the age of 86 from COVID-19 (24 March 2020). His father is Michel Manfred N’Djoké Dibango, a civil servant. Her mother was a fashion designer, running her own small business.

Moreover, he had no siblings, although he had a stepbrother from his father’s previous marriage. And in Cameroon, one’s ethnicity is dictated by one’s father, though Dibango wrote in his autobiography, Three Kilos of Coffee, that he had “never been able to identify completely with either of [his] parents.”

During his childhood, Dibango slowly forgot the Yabassi language in favor of the Duala. Though, his family did live in the Yabassi encampment on the Yabassi plateau. Dibango attended Protestant church every night for religious education or nkouaida.

After his education at his village school, Dibango attended a colonial school, near his home, where he learned French. He cherished the teacher, whom he described as “an extraordinary draftsman and painter.” In 1944, French president Charles de Gaulle chose this school to perform the welcoming ceremonies upon his arrival in Cameroon. Dibango moved to France to study Music. He enrolled in piano lessons.

Manu began taking classical piano lessons at age 17, and a few years later he studied saxophone, having been captivated by the music of Duke Ellington, Sidney Bechet, Louis Armstrong, and other jazz artists. He joined a jazz band with noted Cameroonian guitarist and composer Francis Bebey and soon became a recognized entity within the local jazz circuit.

In 1956 Dibango moved to Brussels, where he not only learned to play the vibraphone but also expanded his stylistic vocabulary to include various West African forms—most notably makossa, a Cameroonian genre based in Douala. He began to realize his ambition of forging a new musical sound by merging jazz with African popular traditions.

Manu toured Europe in 1960, with African Jazz, a band led by Congolese musician Joseph Kabasele, who shared Dibango’s interest in musical fusion. And after the tour, he followed Kabasele to the Democratic Republic of the Congo, and he remained with the band until 1963 when he moved back to Cameroon. There, he founded his own band and continued to broaden his knowledge of African regional styles.

After returning to Paris

Manu returned to Paris in 1965 and supported himself as a studio musician, backing many African American and African artists at a time when Europe was riding the wave of soul music. He continued to experiment with new amalgamations of jazz. And various popular music, especially those stemming from Africa and the African diaspora. He included one such experiment on the B-side of a single in 1972 when he released a song he had been commissioned to write for the African Cup of Nations football (soccer) match.

Moreover, that agreement was “Soul Makossa,” a mixture of jazz, makossa, and soul music that ultimately marked the turning point in his career. Though Europeans knew it, North America didn’t know of both “Soul Makossa” and Dibango himself until the tune was discovered and broadcast in 1973 by a radio disc jockey in New York City. ‘Soul Makossa’ took the United States by storm, hitting Dibango into the limelight of popular music. Michael Jackson also popularly paraphrased it in the recurring phrase “ma-ma say, ma-ma sa, ma ma-coo-sa” at the end of his 1982 release “Wanna Be Startin’ Somethin’.”

Manu traveled internationally, absorbing new sounds and undertaking collaborative projects with musicians who represented an array of Afro-Caribbean, African, and African American popular music genres. He traveled internationally with the American salsa band the Fania All-Stars in 1973. And after many years, he recorded two albums—Gone Clear (1980) and Ambassador (1980)—in collaboration with a host of Jamaica’s most prominent reggae performers. 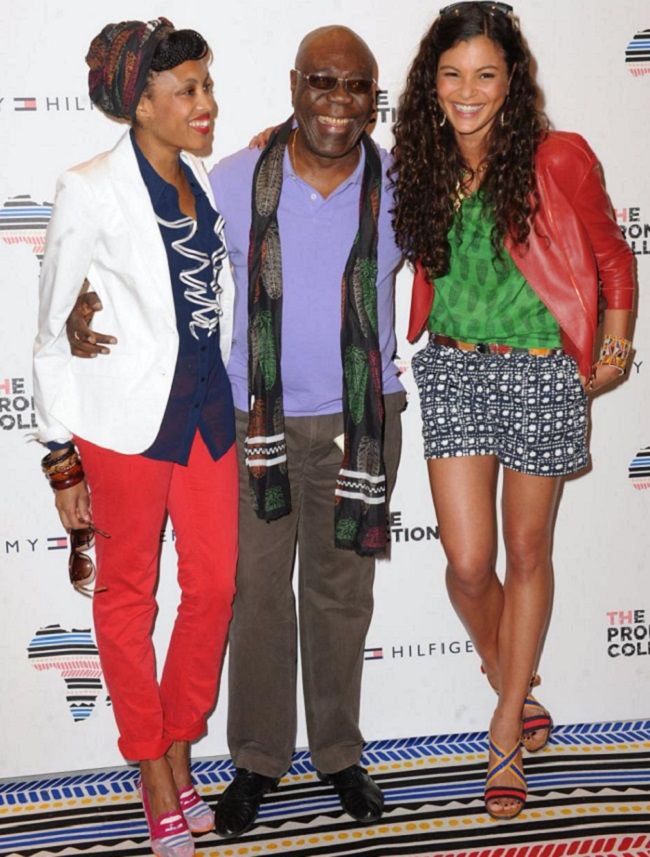 Caption: Manu Dibango, Imany, and Yelena Noah at the launch of the Promise collection by Tommy Hilfiger in Paris, April 26, 2012. Source: Purepeople

Meantime, he released the Africa-oriented albums Home Made (1978), featuring Nigerian and Ghanaian musicians, and Waka Juju (1982). It tapped elements of an assortment of African popular styles. Further, after the release of the funk-flavored Surtension (1982), Dibango worked with an international lineup of jazz luminaries, such as American pianist Herbie Hancock in Electric Africa (1985) and South African trumpeter Hugh Masekela in Afrijazzy (1986).

His jazz blends of the 1990s and the 2000s continued to draw from a diverse pool of popular music. Rap, Jazz, and many African traditions were twisted in Polysonik (1991), while Wakafrika (1994) brought together African vocal virtuosos Youssou N’Dour (Senegal), and King Sunny Ade (Nigeria).

And some more of them are, Salif Keita (Mali), Angélique Kidjo (Benin), Ray Lema (Congo), and the group Ladysmith Black Mambazo (South Africa), as well as other prominent musicians. Manu revisited his spiritual roots with a mixture of gospel music, spirituals, and rhythm and blues on the album Lamastabastani (1995). Some of his other famous songs are “Big Blow” and “New Bell”. 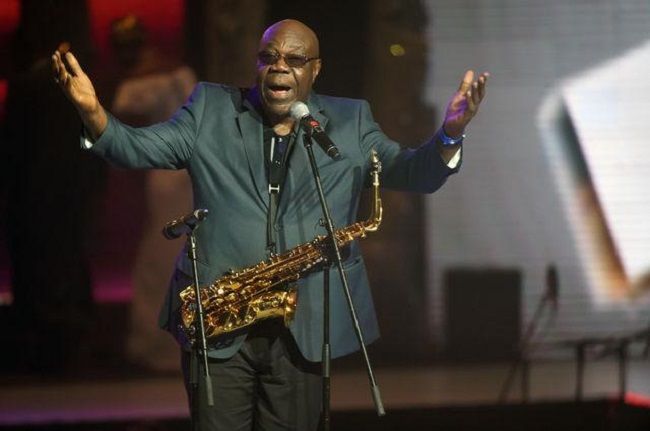 Caption: Manu Dibango while performing on the stage. Source: Var-Matin

More about his albums

Manu’s albums of the early 21st century tended to be retrospective. Africadeli, for instance, is a compilation of his greatest hits. He released it to mark the 30-year anniversary of the “Soul Makossa” explosion. He issued Manu Dibango joue Sidney Bechet, an all-jazz tribute to American saxophonist Sidney Bechet in 2007. The music had been a formative force in Dibango’s musical development.

Additionally, Manu composed music for film and television. He published his autobiography, Three Kilos of Coffee, with Danielle Rouard in 1990. Considering a deep and ongoing concern for the well-being of humanity. And he often used his music and his influence to garner support for various humanitarian causes.

In honor of his contributions to the development of music as well as his cultivation of cross-cultural dialogue—particularly between Europe, Africa, and North America—through the arts, UNESCO named him the Peace Artist of the Year in 2004.

In 2009, the Douala-born songwriter filed a lawsuit against both Jackson and Rihanna for using the hook from Soul Makossa without permission. It is alleged when Rihanna asked Jackson to use the hook in Don’t Stop The Music, Jackson approved the request without asking Dibango.

There are no details regarding his dating history to date. He has never mentioned his personal life to the public yet. However, some sources mention that he had three children, named, Georgia Dibango, Marva Dibango, and Michel Dibango. But his wife’s name is unknown. Similarly, Manu has not been a part of any affair rumors or any other controversies.

Moreover, Manu received the Africa Festival Award from the Africa Festival Würzburg for his musical life’s work in 2006. He presented his memories under the title Balade en Saxo Dans Les coulisses de ma vie in 2013. UNESCO mentioned him as an “artist for peace” in 2004 for his intensive work and interests of the African continent. 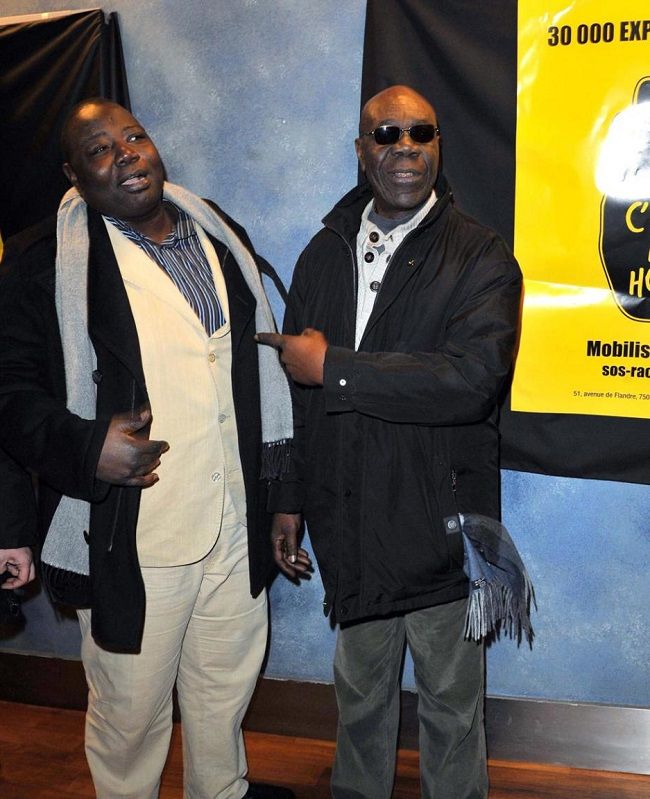 He was one of the all-time greatest African musicians and a legend whose contribution can’t be described in the words. His exact fortune and net worth figures are stands out at around $100 million. However, most of the worth came from my musical career and other sources. Apart from music, he had spent money on stocks and property holdings, and other endorsement deals. Moreover, he established brands for food, fashion, and lifestyle products as well. Currently, he has not signed brand endorsement deals with any brands. However, it is sure that he will surely be endorsing some of the top brands from around the world real soon in the future.

Manu had a great personality. He stood 6 feet 3 inches tall and weighs around 96 Kgs. His chest-waist-biceps measurement was 44-34-16 inches respectively. Moreover, his shoe size was 11 (US). He was bald and his eye color was dark brown.

Manu must be active on various social media platforms previously. But as he has already passed away, we couldn’t find any of his social media accounts. However, it seems like he is available on Twitter with more than 1K under the username ‘@ManuDibango’. He also was active on Facebook with more than 60K followers.