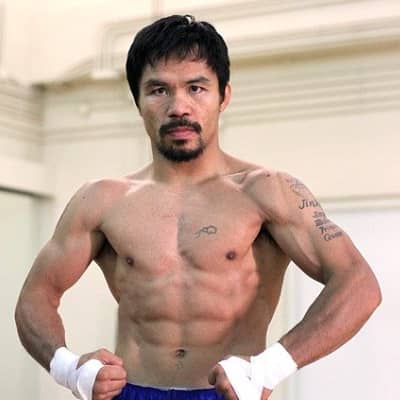 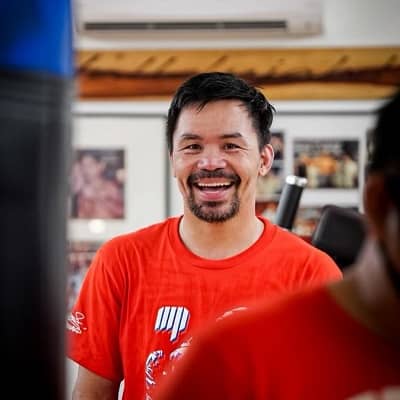 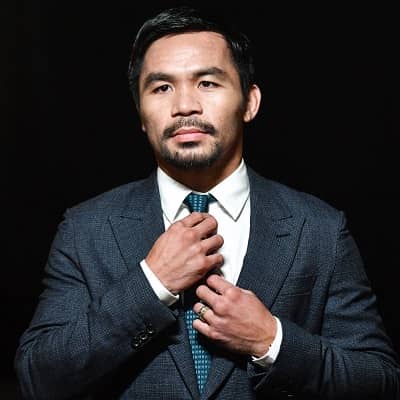 Manny Pacquiao was born on December 17, 1978, and he is currently 42 years old. Manny hails from Kibawe, Bukidnon, Philippines, and his zodiac sign is Sagittarius. His full name is Emmanuel “Manny” Dapidran Pacquiao Sr.

When Manny was in 6th grade, his parents separated. It was due to his father having an affair. Likewise, Manny has five siblings and he is actually the 4th one among all the siblings. One of his siblings is Alberto “Bobby” Pacquiao. Manny’s brother is also a politician and former professional boxer.

Talking about his educational journey, Manny studied at Saavedra Saway Elementary School in General Santos City for elementary education. However, due to extreme poverty, Manny dropped out of high school. 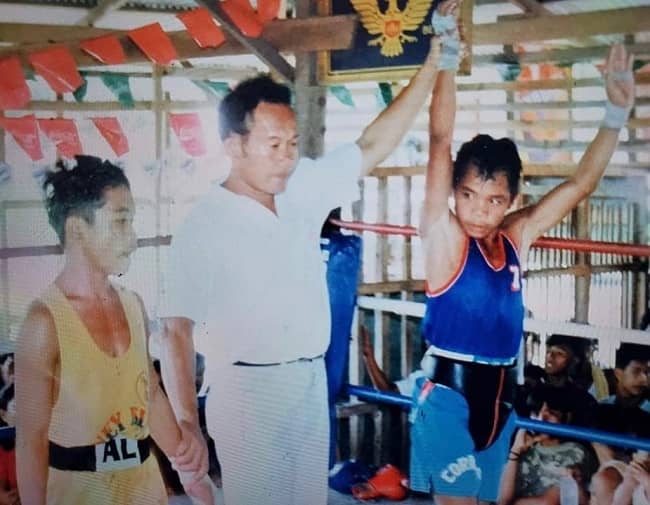 Caption: Manny Pacquiao after winning a fight at an early age. Source: Instagram

In the year 1990, Manny began training with his uncle in a makeshift home gym. With 6 months of training, Manny began boxing in a park in General Santos. He eventually traveled to other cities to fight higher-ranked opponents. By the young age of 15 years, Manny had become the best junior boxer in the southern Philippines. At the same age, Manny moved to Manila.

In January 1995, Manny made his professional boxing debut. He was only 16 years old when he debuted as a junior flyweight. Furthermore, Manny passed a high school equivalency exam in February 2007. The Department of Education awarded Manny a high school diploma for this achievement.

Later on, Manny also attended Notre Dame of Dadiangas University as well as the University of Makati. At the latter, Manny gained a bachelor’s degree in political science. He majored in local government administration through the Expanded Tertiary Education Equivalency and Accreditation Program (ETEEAP) of the Philippine Councilors League-Legislative Academy (PCCLA).

Manny graduated from Makati on December 11, 2019, allowing him to complete a collegiate-level education via the informal education system.

Further, Southwestern University (SWU) conferred Manny the Honorary Degree of Doctor of Humanities (Honoris Causa) on February 18, 2009, at the Waterfront Cebu City Hotel & Casino in Lahug, Cebu City. The university did this in recognition of Manny’s boxing achievements and humanitarian work. 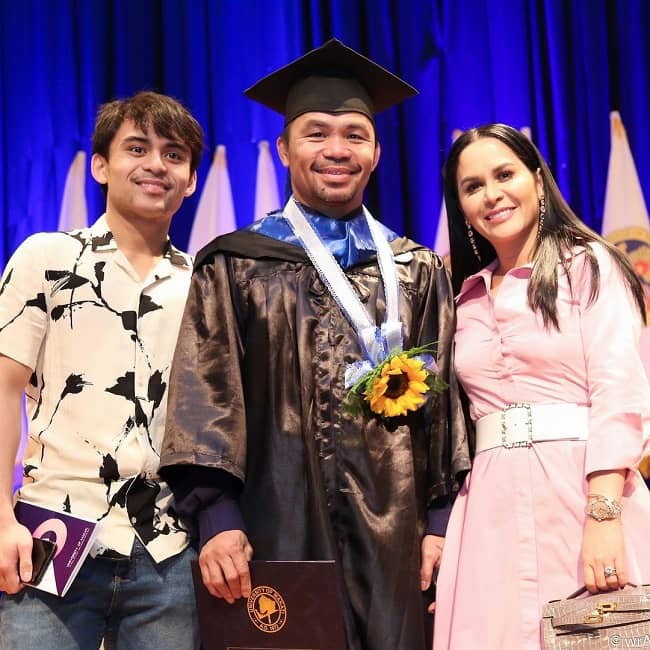 Caption: Manny Pacquiao posing for a photo on the day of his graduation from the University of Makati. Source: Instagram

Professionally, Manny Pacquiao is a popular former boxer and politician. His nickname is “PacMan” and is regarded as one of the greatest professional boxers of all time. At present, the Filipino boxer serves as a Senator of the Philippines and is also a party president of the ruling PDP–Laban party.

Moreover, Manny has won 12 major world titles and he is also the only eight-division world champion in the history of boxing. The professional boxer was also the 1st one to win the lineal championship in five different weight classes. He was also the 1st boxer to win major world titles in four of the eight glamour divisions. These glamorous divisions are flyweight, featherweight, lightweight, and welterweight.

Furthermore, Manny is the only boxer to hold world championships across four decades from the 1990s to the 2020s. By the year 2015, Manny’s fights had generated $1.2 billion in revenue. It was from his 25 pay-per-view bouts. Similarly, Forbes names Manny as the 2nd highest-paid athlete in the world in the same year.

Likewise, in July 2019, Manny became the oldest welterweight world champion in history. He was 40 years old at the time. He also became the 1st boxer in history who was recognized as a four-time welterweight champion. That year, Manny defeated boxer Keith Thurman and won the WBA (Super) welterweight title. 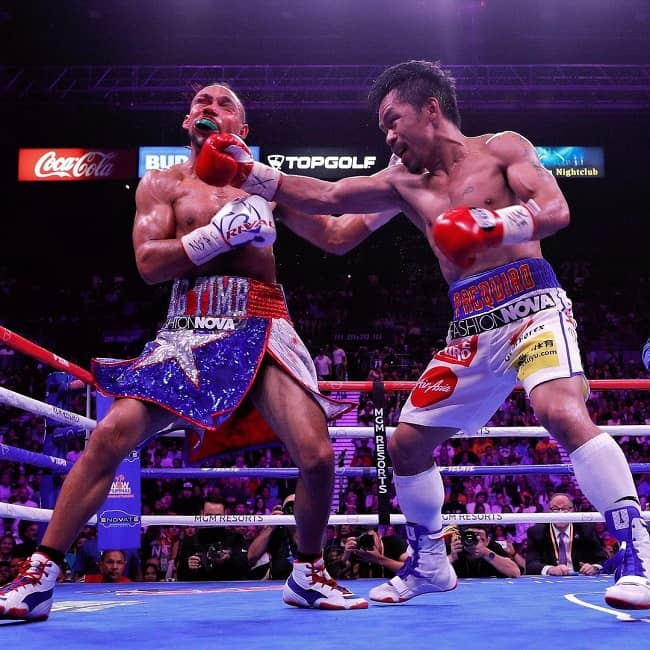 Throughout his boxing career, Manny has defeated 22 world champions. To name a few, the champions that Manny defeated over the years are Chatchai Sasakul, Lehlohonolo Ledwaba, Adrien Broner, and Keith Thurman among others. Similarly, Manny has defeated Marco Antonio Barrera, Érik Morales, Juan Manuel Márquez, and Timothy Bradley twice.

The Boxing Writers Association of America (BWAA), World Boxing Council (WBC), and World Boxing Organization (WBO) all named Manny as the “Fighter of the Decade” for the 2000s. Likewise, in the years 2006, 2008, and 2009, Ring magazine, ESPN, and BWAA awarded him “Fighter of the Year”.

Additionally, in the years 2009 and 2011, Manny won the “Best Fighter ESPY Award”. Further, BoxRec has ranked Manny as the greatest Asian fighter of all time. Also, in the year 2016, Manny ranked #2 and #5 on ESPN’s and BoxRec’s lists of the top pound-for-pound boxers of the past 25 years respectively.

Similarly, the professional boxer is signed with Premier Boxing Champions (PBC) promotion since the year 2018. He is also signed with Paradigm Sports since 2020. Moreover, Manny is the WBA welterweight champion-in-recess since January 2021.

Manny Pacquiao’s wife is Jinkee Jamora. The two tied the knot on May 9, 1999. Likewise, the couple shares five children. They are sons: Emmanuel Jr. (Jimuel), Michael Stephen, and Israel; and daughters Mary Divine Grace (Princess) and Queen Elizabeth (Queenie). Manny’s 1st son is an amateur boxer whereas his 2nd son is a rapper. 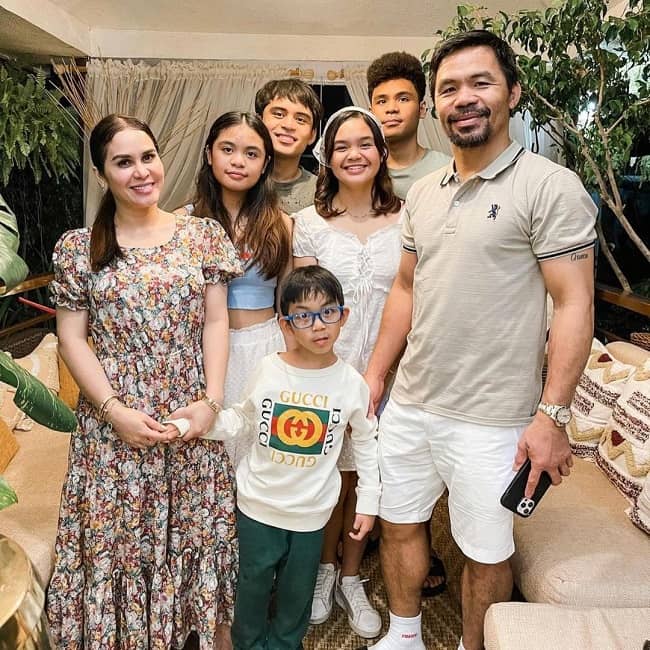 Caption: Manny Pacquiao posing for a photo with his family. Source: Instagram

Manny Pacquiao stands tall at an approximate height of 5 feet 6 inches or 168 cm and his weight is around 66 kg. Likewise, the boxer has a chest-waist-biceps size of 41-32-15 inches respectively. Manny has dark brown eyes and hair of the same color.

Talking about his social media presence, Manny Pacquiao joined Twitter in February 2011 and so far has over 2.6 million followers on his @MannyPacquiao account. Likewise, he is available on Instagram under the username @mannypacquiao. His Instagram currently boasts 6.3 million followers.

Moving on, Manny has a net worth estimation of approximately ₱3.2 billion Philippine Pesos as of December 2019. Likewise, the boxer’s net worth as of 2021 is $190 million US dollars. This makes Manny the 6th richest boxer of all time.