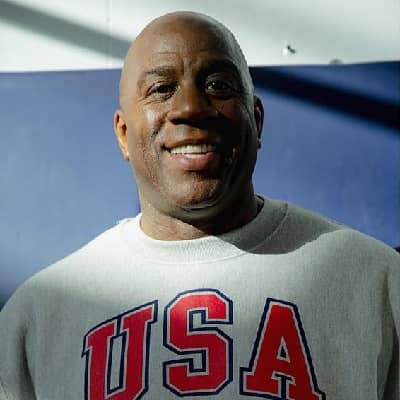 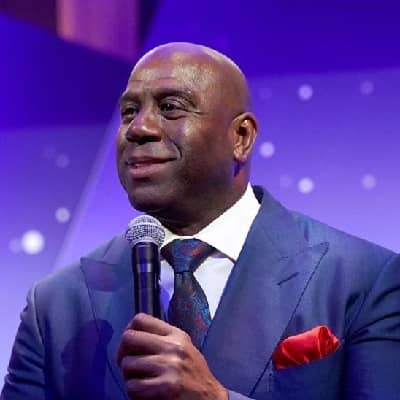 Magic Johnson is an American retired professional basketball player and former president of basketball operations of the Los Angeles Lakers of the National Basketball Association (NBA). Often regarded as the best point guard of all time, Magic Johnson is also considered to be one of the greatest players in NBA history. He played point guard for the Lakers for 13 seasons.

Magic Johnson was born as Earvin Johnson Jr. on August 14, 1959, in Lasing, Michigan. In 2022, he is 62 years old. He is from a large family and grew up with nine brothers and sisters. Both of his parents worked- his father for the General Motors plant in town and his mother as a school custodian. He had a passion for basketball and would start practicing as early as 7:30 a.m. At Everett High School, Johnson earned his famous nickname, “Magic”, after a sportswriter witnessed him compiling 36 points, 16 rebounds, and 16 assists in a single game.

Johnson continued to play in college for Michigan State University. Standing at 6 feet 9 inches tall, he made for an impressive point guard. Johnson excelled during his freshman year helping his team clinch the Big Ten Conference title. The following year, he played an important role in taking the Spartans to the NCAA Finals. There they faced off against the Indiana State Sycamores. In one of the most famous matchups in college basketball history, Johnson went head-to-head with Indiana’s star forward, Larry Bird. The Spartans proved victorious, and the Johnson-Bird rivalry would follow the players to their days with the NBA. 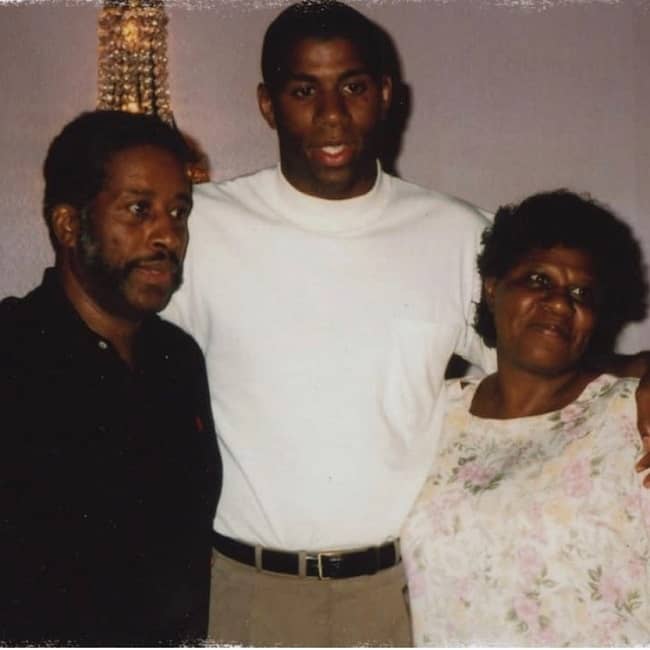 Leaving college after two years, Magic Johnson was drafted by the Los Angeles Lakers in 1979. He did well in his first season (1979-80) with the team, averaging 18 points, 7.7 rebounds, and 7.3 assists per game. Johnson won the NBA Finals Most Valuable Player award for his efforts in leading the Lakers to a victory over the Philadelphia 76ers, winning four of six games in the championship series. The team also included such strong players as Kareem Abdul-Jabbar, Jamaal Wilkes, and Norm Nixon. During Johnson’s third season (1981-1982) with the team, the Lakers made the NBA Finals again.

For the second time in his pro career, the Lakers defeated the Philadelphia 76ears for the championship title. Additionally, Johnson, who scored 13 points and added 13 rebounds with 13 assists in Game 6 of the 1982 Finals, earned his second series MVP award. The following season (1982-1983) saw the third Finals match-up between the Lakers and the 76ers in four years. This time, however, L.A. was defeated by Philadelphia, losing four consecutive games to the 76ers and winning none during the series. In the 1984 NBA Finals, Johnson again encountered rival Bird, who had signed with the Boston Celtics. This was the first of several match-ups between the two teams.

The Celtics beat the Lakers in a tight competition-four game to three-for the 1984 championship. The Lakers, however, took down the Celtics the following year in the Finals. Johnson and his team continued to be one of the NBA’s top competitors throughout the rest of the 1980s. In the 1987 NBA Finals, they again defeated the Boston Celtics, and Johnson received the NBA Finals MVP Award for the third and final time in his career. That year Johnson also averaged a career-best 23.9 points per game, resulting in his first regular-season NBA MVP award-an honor he would receive again in 1989 and 1990.

In November 1991, Johnson retired from the Lakers after revealing that he had HIV, the virus that causes AIDS. He believed he contracted the disease through unprotected sexual activity. The diagnosis was especially hard for Johnson. At the time he learned he had the disease, his wife Cookie was pregnant with their first child. Fortunately, both his wife and their son, Earvin Ill, tested negative for HIV. At the time, many people thought the virus mostly affected homosexuals or intravenous drug users. There was also a lot of fear and confusion regarding how the disease could be transmitted.

Johnson’s decision to go public with his medical condition helped raise awareness about the disease. He established the Magic Johnson Foundation to support HIV/AIDS research efforts and awareness programs that same year. In 1992, he wrote the educational guide What You Can Do to Avoid AIDS. Undeterred, Johnson played in the 1992 Summer Olympic Games in Barcelona, Spain. Along with Michael Jordan and Bird, he was part of the American “Dream Team” that won the gold medal. He hoped to return to professional basketball for the next season, but he dropped that plan amidst fear from other players who were concerned about playing with an HIV-positive competitor.

Johnson explored other options after leaving basketball. In 1992, he had his latest book, My Life, published. Johnson had previously written two books about himself and the game, 1983’s Magic and 1989’s Magic’s Touch. He also appeared on television as a sports commentator. During the 1993-1994 basketball season, Johnson tried his hand at coaching with the Lakers. He then bought a small share of the team. In 1996, stagging a brief comeback, Johnson returned for a few months to the Lakers as a player. He finally retired for good that same ear, leaving behind an impressive legacy. 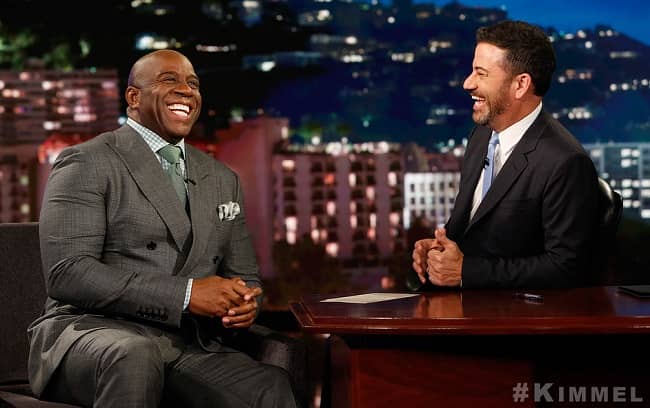 Magic Johnson is a retired American basketball player and entrepreneur who has a net worth of $600 million. During his playing career, he earned just over $18 million in salary and several million more in endorsements.

Johnson and his wife own a home in Beverly Hills in the gated section known as Beverly Park. The couple also owns a Tuscan-style beach house in Dana Point in Orange Country, California. Moreover, the couple used to own a house in Napili, Hawaii, but it was too far to get to when their children were growing up so they swapped it for the beach house located about 75 miles south of Beverly Hills.

Johnson married Earlitha “Cookie” Kelly in a small ceremony in Lansing, Michigan in 1991. The couple has a son, Earvin III (EJ), born in 1992, who is openly gay. EJ appeared on the reality TV show Rich Kids of Beverly Hills. Magic and Cookie adopted their daughter Elisa in 1995. Johnson and his wife live in Dana Point, California, and Beverly Hills. He also has a son from a former relationship. In 1981, Andre Johnson was born to Melissa Mitchell. Andre was raised by his mother, but he spent time with Johnson every summer and later worked as a marketing director for Magic Johnson Enterprises. 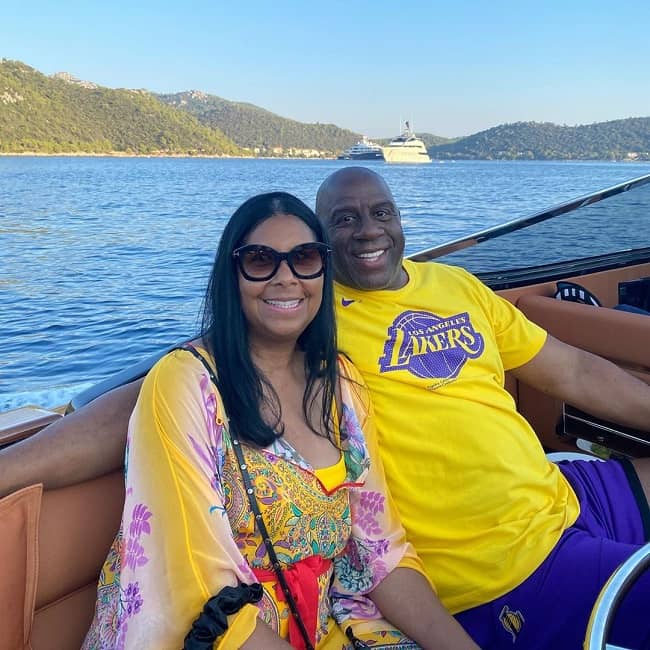 Regarding Magic Johnson’s body measurement, he is 6 feet 9 inches tall. He has a dark complexion with an athletic body type. Similarly, his weight is 93 kg. However, he has a pair of black eyes and black hair. Other information about his body measurement, shoe size, and dress size, are not available at the moment.