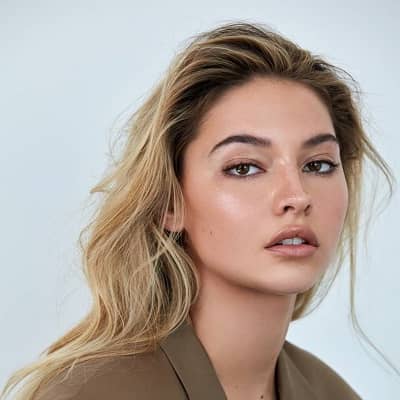 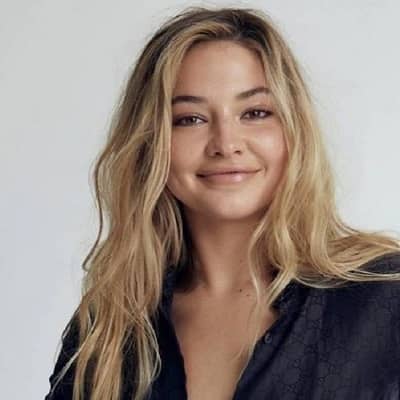 Madelyn Renee Cline is a well-known American actress and model. Madelyn Cline is popularly known for her role in ‘Outer Bank(2020-present)’ Netflix drama series as ‘Sarah Cameron’, ‘Vice Principals(2016-2017)’, ‘The Originals(2017). She was also seen in a music video of Kygo featuring Donna Summer and herself titled ‘Hot Stuff’.

Madelyn Cline was born on 21 December 1997 (age 23 years old) in Charleston, South Carolina, United States. She has the nickname ‘Maddie’ and her parents are Mark Cline and Pam Cline. Talking about her mother Pam Cline she is a ‘Real estate agent’ in America. Her father is an Engineer by profession and he is highly educated. Moreover, their parents are very supportive and caring and support her every dream.

She has no siblings as per sources. She belongs to an American Nationality and is of mixed Ethnicity. Her sun sign is Sagittarius. Her sexual orientation is straight. In an interview with Women’s Health, she revealed that she suffered from an ‘Eating Disorder’ in her Adolescence, which lead her to a mental disorder. Similarly,  Her hobbies include Photography Drawing, Road trips, Hiking, horseback riding, and wakeboarding. 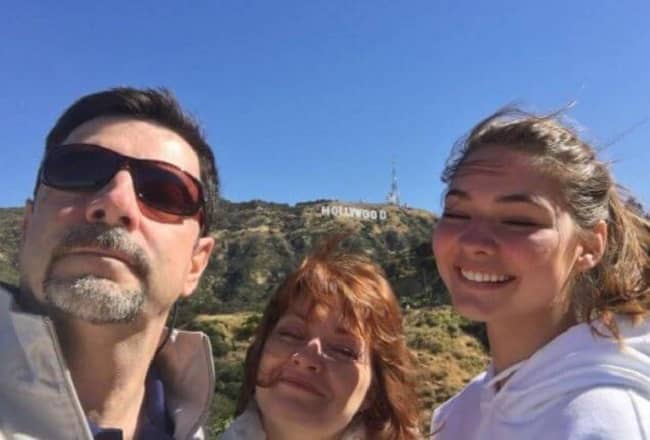 She was a brilliant child from her childhood. She attended Charleston Day School and late went to Coastal Carolina University after graduating from school. After that, she dropped out of the university in 2017 to pursue her acting career.

The American actress has started her career in 2011, where she debuted her acting career with her first movie ‘23rd Psalm: Redemption as Maya Smith. Then, she acted in movies like ‘Savannah Sunrise(2016)’ as Willow,’ Boy Erased(2018)’ as Chole, and ‘This is the Night(2021)’ as Sophia Larocca. Likewise, She has acted in many Television series as well. In 2016 she acted in a television film ‘The Jury’ as Grace Alexander. Her acting in television series started in 2016. Her first television series was ‘Vice Principals(2016-2017)’ as Taylor Watts in 3 of the episodes.

She also acted in famous supernatural drama series of the original vampires ‘The Original’ Starring Joseph Morgan, Clair Holt, Daniel Gillies, and Phoebe Tonkin in lead. Likewise,  she also appeared in the famous teen supernatural series ‘Stranger Things(2017)’ as tina. Moreover, she was also seen playing the role in the web series ‘Day by Day(2020)’.Additionally, She acted as a Voiceover for ‘Daisy’ (the character) in the episode ‘Winnie, Betty and…’She is a trained ballet dancer and appeared in Tv Commercials and print ads or clients such as T- mobile, Next, and Sunny D. 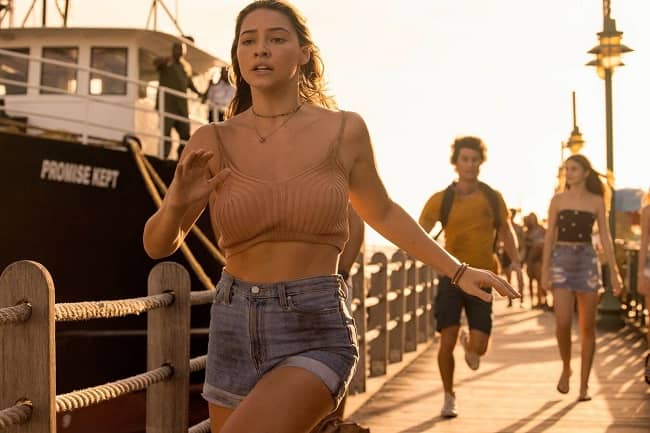 She was offered the role of Sarah Cameron in the television series ‘Outer Banks(2020-present)’ as the main lead. It was her career-best performance that gives her career a huge boost up. Likewise,  she also acted in one of the music videos of ‘Kygo featuring Donna Summer and herself’ titled ‘Hot Stuff’. She has always proved audience for her better acting and has emerged as a phenomenal actress in today’s generation. Her upcoming projects are ‘What Breaks the Ice’ as Emily and ‘Knives Out 2’. However,  fans have gone crazy about her upcoming projects.

Talking about awards and nominations she along with her co-star from Outer Banks won MTV Movie and TV Awards for best kiss. Her upcoming projects might bring many awards back home too. 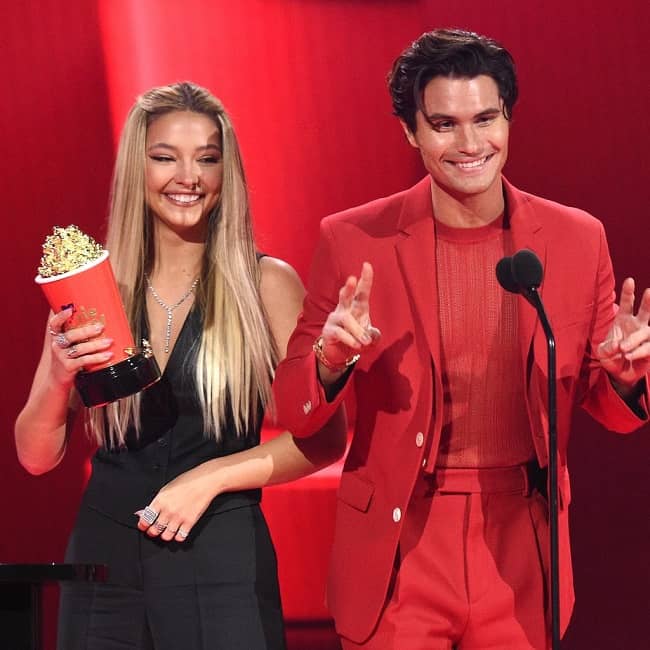 The famous has been in the acting industry for quite some time now. The actress has also done collaborations with Set Active and Aro Swim which further adds to her net worth. The estimated net worth is around $1.2M as per reports. The further projects might help her to only rise in the coming days.

The American actress is dating her costar Chase Stokes from Outer Bank. As per the report, the cast of the outer bank was Quarantined for around a month which further emphasized their closeness. Additionally,  The duo had been together for one year as of now. In June 2020 the duo announce their dating. Their fans are more than happy to hear this news. 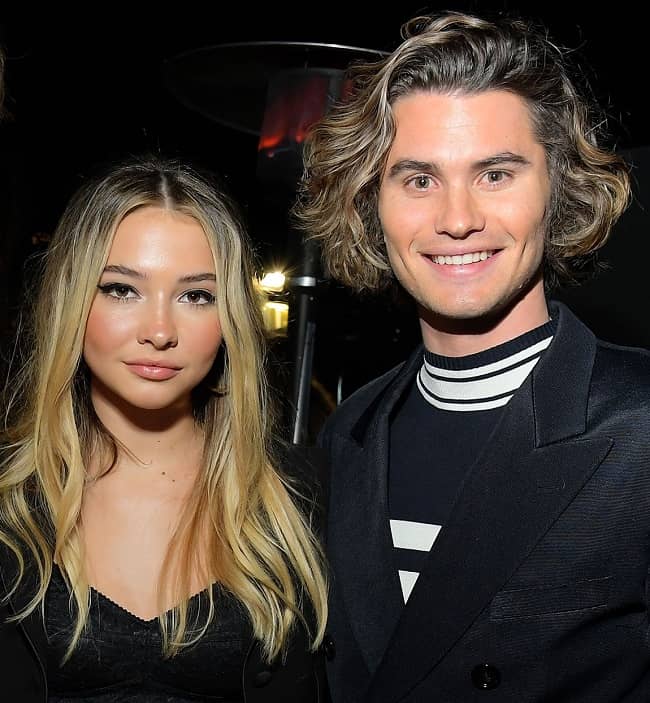 The beautiful actress’s body is to die for. She has a warm and delightful personality. She is 5 ft 6 inches tall and about 59 kg. Her body measurements are 34-28-36 inches and her bra size is 34A. The actress has slim body brown hair and dark brown eyes.

The actress has gained quite a popularity as of now. Moreover,  Her acting whether in movies or television series, or songs it has always caught the eyes of viewers. She has tremendous followers on social media. Likewise,  She has around 11.5M followers on Instagram, around 408.2k followers on Twitter, and around 5.3M followers on TikTok.