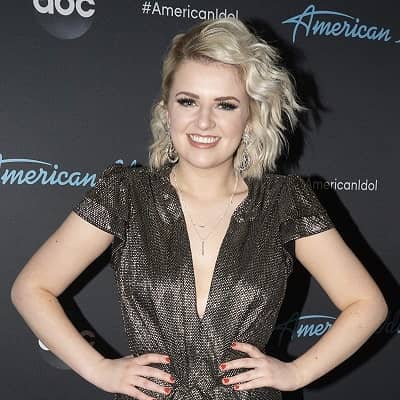 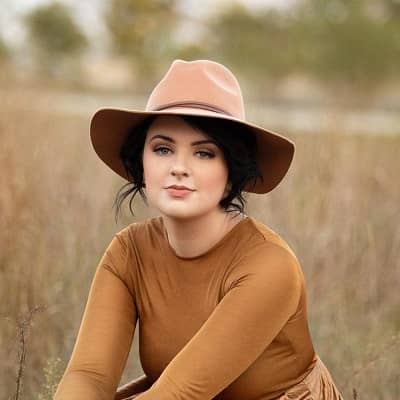 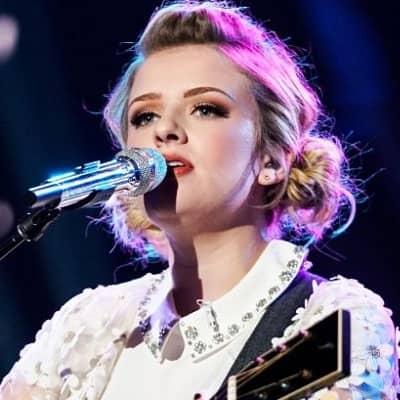 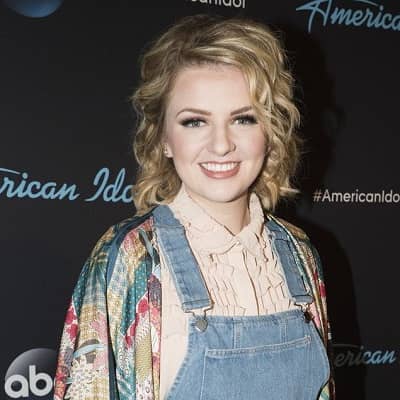 Maddie Poppe was born on December 5, 1997, and she is currently 23 years old. Her hometown is Clarksville, Iowa,  United States, and her zodiac sign is Sagittarius. Likewise, her full name is Madeline Mae Poppe.

From an early age, Maddie loved to sing for her family. However, she started performing only when she was in middle school. Maddie is a graduate of Clarksville High School. After high school graduation in 2016, she attended Iowa Central Community College. Later on, she enrolled in Hawkeye Community College. 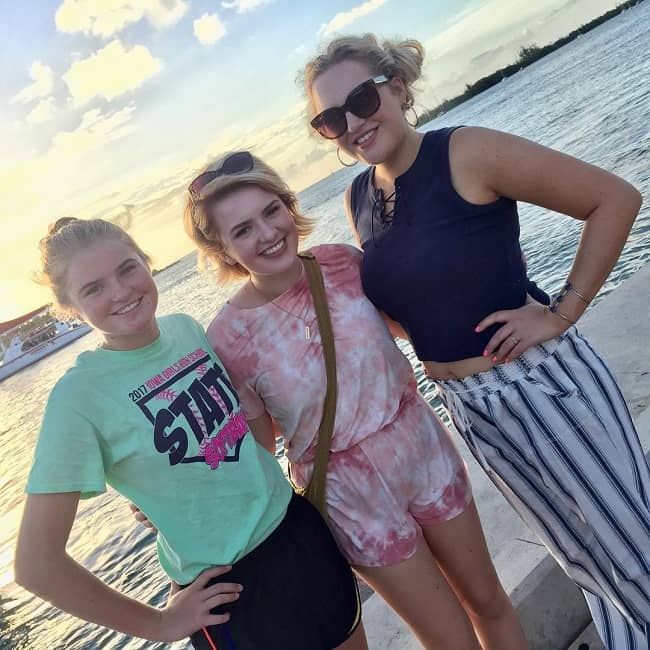 Caption: Maddie Poppe posing for a photo with her sisters. Source: Instagram

Talking about her family, her parents are mother Tonya and father Trent. Trent is also a musician and guitarist. Maddi performed with her father and his band at the Pioneer Days festival. Likewise, she also has two sisters namely Emma and Hannah.

The young girl started performing at the Butler County Fairgrounds in Allison, Iowa. Maddie has also worked as a stagehand – setting up equipment for musicians at the county fair.

Professionally, Maddie Poppe is a famous musician, singer, and winner of the 16th season of American Idol. The young personality is famous for being a folk singer. As a musician, Maddie is also a multi-instrumentalist. She can play the guitar, ukulele, and piano.

Before she won the American Idol, Maddie already released an independent album. Its title is Songs from the Basement and she released it on June 20, 2016. The same month the young artist also opened for Diamond Rio at the Butler County Fair. The young singer then released her first studio album called Whirlwind in the year 2019. 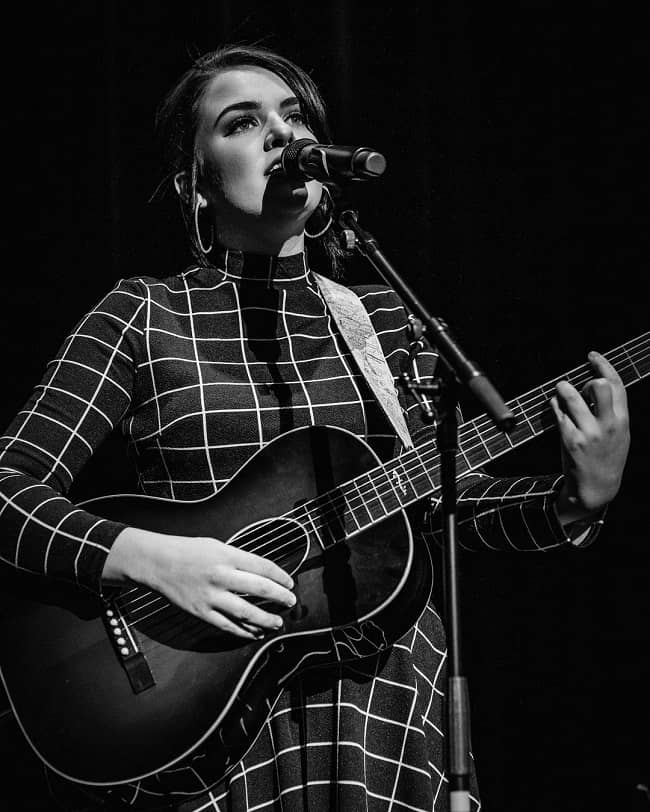 Talking about her career before the American Idol, Maddie auditioned for The Voice in the year 2016. Her audition aired on February 29, 2016. The Voice was in its 10th season when Maddie Poppe auditioned. The young singer sang the song Dog Days Are Over from Florence and the Machine. However, none of the judges turned their chairs, and ultimately she was eliminated.

The judges at the time were Pharrell Williams, Adam Levine, Christina Aguilera, and Blake Shelton. Although she was eliminated, Clarksville honored Maddie with a city event at the Clarksville Library. 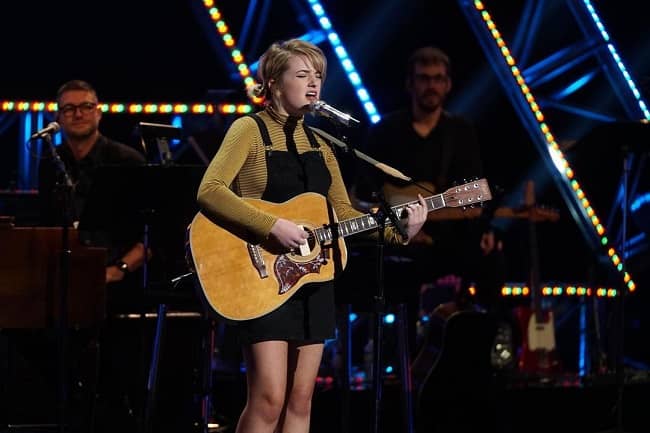 Caption: Maddie Poppe during her performance on January 25, 2018. Source: Instagram

Talking about her journey with the American Idol, Maddie auditioned for the 16th season. In the New York audition, Maddie sang the song Rainbow Connection from The Muppet Movie. The judges praised the young singer. Lionel Richie praised her for having a “storytelling voice”. while Katy Perry shared that Maddie had a distinctive quality in her voice. Later, in the Top 24 stage, Maddie Poppe sang the song Brand New Key. She collaborated with Colbie Caillat for her celebrity duet performance. The duo sang the song Bubbly.

For her performance in the live shows in the Top 14, Maddie sang Homeward Bound and chose Walk Like an Egyptian as her victory song. Then for the Top 10 live shows, she sang the songs The Bare Necessities, Nothing Compares 2 U by Prince, If It Makes You Happy, Told You So by Carrie Underwood, and God Only Knows.

Before the May 20 finale, Governor Kim Reynolds declared May 20, 2018, as the “Maddie Poppe Day” in Iowa. Then during the finale, Maddie performed the song Landslide by Fleetwood Mac to honor her hometown. During the same event, the young singer sang her original song Don’t Ever Let Your Children Grow Up as a reprise, and her winners’ single was Going Going Gone. 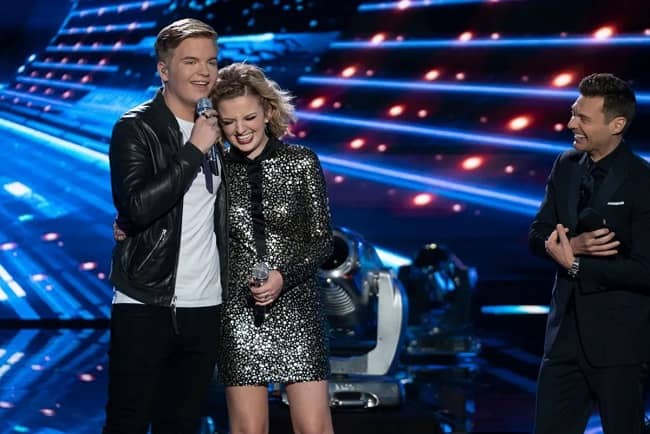 Caption: Maddie Poppe and her lover Caleb during their performance in the American Idol 2018 Finale. Source: AmoMama

Mitch Allan, Lindy Robbins, and Julia Michaels originally wrote the winners’ single that Maddie performed. On May 21, Maddie Poppe was declared the winner while Caleb Lee Hutchinson became the runner-up, and Gabby Barrett came 3rd place. On the finale broadcast, Maddie and her father performed five songs. Along with them, Maddie also sang the song Amazing Grace.

Then on May 17, 2019, Maddie released her first studio album called Whirlwind. The young singer appeared once again on American Idol on April 21. As a winner of the 16th season, Maddie also appeared on the finale episode of the 17th season. Maddie then joined Ingrid Michaelson on the Dramatic Tour in the United States. It was from 3 to 29 October 2019. Fairly recently on November 20, 2020, Maddie independently released Christmas From Home. It is her holiday EP. The young singer went on Maddie Poppe’s Acoustic Christmas tour in Iowa from 4 to 19 December 2020.

Maddie Poppe has been in a relationship with Caleb Lee Hutchinson. The lovers met each other during the American Idol Season 16. Both of them were contestants. Maddie won the title while her lover, Caleb, became the runner-up of the season. Caleb was the one who declared that the two had been dating each other. The news was shared on the finale show of season 16. 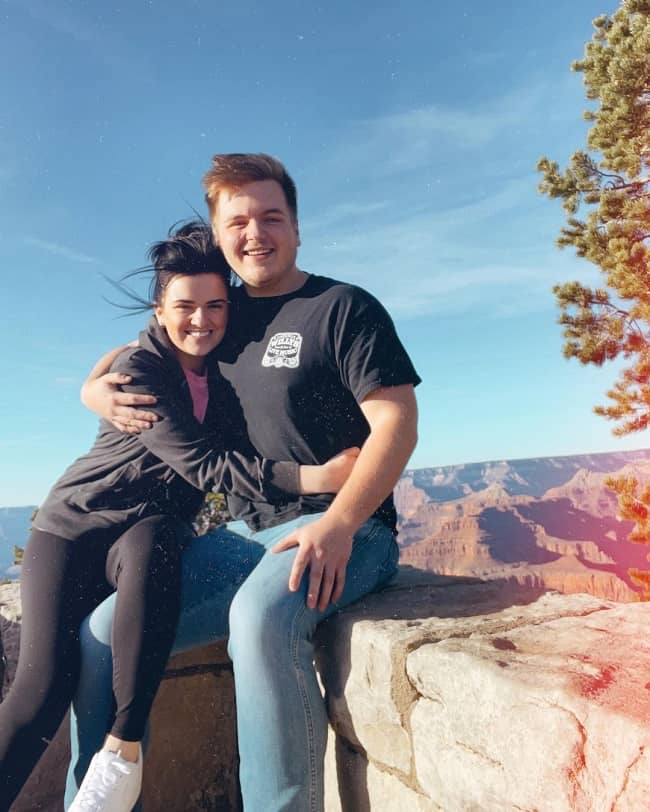 Caption: Maddie Poppe posing for a photo with her lover Caleb. Source: Instagram

Maddie Poppe stands tall at an approximate height of 5 feet 4 inches and her weight is around 50 kgs. Likewise, the singer’s chest-waist-hip measurements are 32-26-34 inches respectively. The folk singer has hazel green eyes and blonde hair.

The young singer then created her official Youtube channel “Maddie Poppe” on July 19, 2010. So far, this channel has garnered over 14 million views and 80.1K subscribers. She also has over 242K people following her journey on Facebook. Moving on, Maddie has a net worth estimation of approximately $1 million to $2 million US dollars.