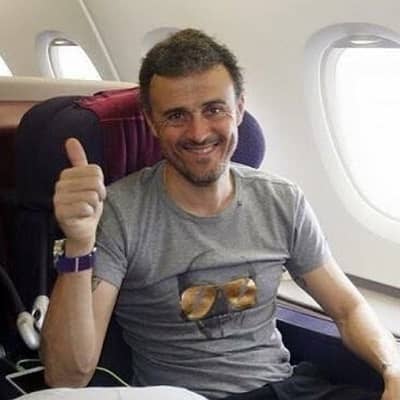 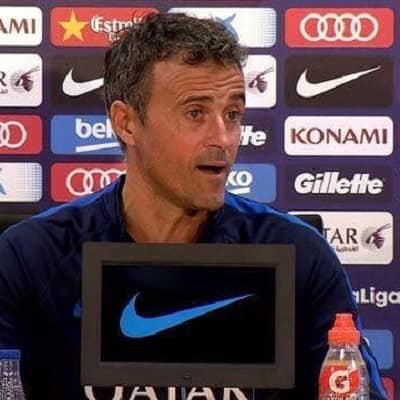 Luis Enrique Martinez Garcia best known as Luis Enrique was born on the 8th May of 1970, in Gijon, Spain. According to his birth date, Luis is 52 years old and holds Spanish nationality. Moreover, this football manager has a birth sign of Taurus, and he believes in Christianity.

Other than this, this football manager has not shared anything regarding his parent, siblings, early childhood life, and educational life. Moreover, we may presume that his parent has well raised him and gave him a well educational environment.

Luis Enrique started his professional career with the local Sporting de Gijon, where he collected the nickname Lucho from the team’s Mexican player Luis Flores. The majority of his playing career was then spent with Real Madrid, the top Spanish team, where he played for five seasons.

He appeared in 157 games and contributed 15 goals to the team. With Real Madrid, he also won one each of the La Liga, Copa del Rey, and Supercopa de Espaa. Later, he played for Barcelona, where in his first three seasons there, he scored 46 La Liga goals. The following year, El Pais named him the Spanish Player of the Year. 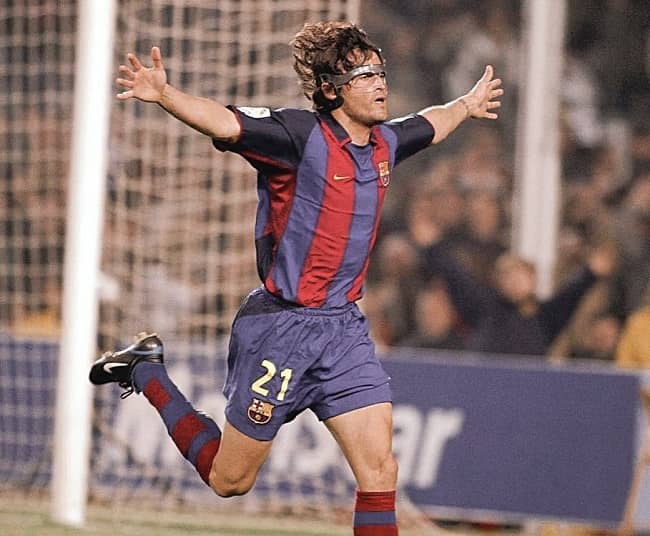 Caption: Luis Enrique during his playing career with the FC Barcelona (Source: Instagram)

He was regularly injured during his final years in Barcelona and did not want to sign a new deal. Sporting Gijon, his first club, had made him an offer, which he had turned down. He made 207 appearances and scored 73 goals for Barcelona while playing for them, winning two La Liga, one Copa del Rey, one Supercopa de Espana, the UEFA Cup Winners’ Cup, and the UEFA Super Cup.

At the age of 34, he announced his retirement from professional football on August 10, 2004, having played 400 league games and scored 102 goals. Pele had ranked him among the top 125 living footballers in March.

Luis has competed at the U21, U23, and senior levels for Spain. He also participated in the Barcelona Summer Olympics’ gold-mining team in 1992. On April 17, 1991, he played for 22 minutes in a 0-2 friendly loss to Romania in Caceres, making his senior international debut.

In three World Cups and one European Championship, he represented the Spanish national team. To give the younger players more playing time and concentrate solely on his club, he announced his retirement from international football on June 23, 2002. He earned 62 caps for Spain’s national team between 1991 and 2002, scoring 12 goals.

Luis Enrique rejoined Barcelona as a coach on May 26, 2008. After an 11-year absence, the club was able to return to Segunda Division with his support in his second season. Despite still having two years left on his contract, he stated in mid-March 2011 that he would leave Barcelona B at the end of the season.

Although he guided the team to the playoffs, they were not qualified for promotion. Moreover, he signed a two-year contract to lead the Giallorossi after reaching an agreement with Italian Serie A team A.S. Roma on June 8, 2011. He was joined by a four-person coaching staff at the club.

Roma lost their opening match in the domestic league to Cagliari Calcio, just the third time in 18 years, and was knocked from the UEFA Europa League by SK Slovan Bratislava. He chose to quit Roma at the end of the season despite having two years left on his contract because he was unable to earn any European competition qualification.

Abel Resino was replaced as the manager of RC Celta de Vigo on June 8, 2013, by Luis Enrique, a former teammate. He guided his team to ninth place in his first and only season. He announced that he was leaving Celta on May 16, 2014.

Returned to Barcelona as a manager

On May 19, 2014, it was revealed that Luis Enrique has signed a three-year contract to return to Barcelona as manager. In his first competitive game, a 3-0 home league victory over Elche CF, he made debuts for arrivals Claudio Bravo, Jeremy Mathieu, and Ivan Rakitic as well as for youth products Munir El Haddadi, Rafinha, and Sandro.

He lost against Real Madrid on October 25, 2014, for the first time in the competition. With a 2-0 victory over Paris Saint-Germain FC on April 21, 2015, he earned his 42nd victory in 50 games as Barcelona’s manager, the best record of any manager.

Barcelona defeated Sevilla FC 5-4 to claim the 2015 UEFA Super Cup on August 11. He alternated between goalkeepers in his first two seasons, using Bravo for league games and Marc-Andre ter Stegen for cup and international games.

However, this policy was opposed by both players. On March 1, 2017, he announced that, due to his contract expiring on June 30, he would no longer serve as team manager. He replaced Fernando Hierro, a former club and national team teammate, as coach of the Spanish national team on July 9, 2018.

On September 8, in his first game in charge, he guided the team to a 2-1 win over England in the UEFA Nations League at Wembley Stadium. He left his position in June 2019 for personal reasons. He went back to the bench on November 19, 2019. 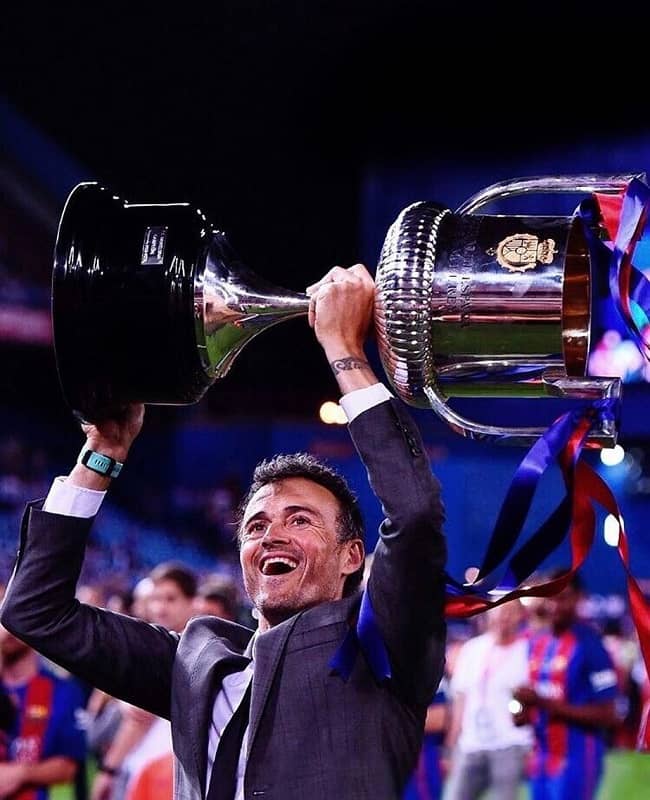 Luis Enrique has been named the best manager of 2015. His five titles in his first season as manager of Barcelona blew the other two finalists, Pep Guardiola and Jorge Sampaoli, out of the water. 1990-91 La Liga Breakthrough Player, World Coach of the Year, IFFHS World’s Best Club Coach, and World Soccer Manager of the Year are some of his other awards of him.

As a football manager and former footballer, he has earned a considerable sum of money in his professional career. His net worth estimates at around $20 million and he has not shared information regarding his salary and income.

Luis married his longtime partner Elena Cullell on 27 December 1997. The couple had a daughter, Xana, who died of bone cancer on August 29, 2019, at the age of nine. 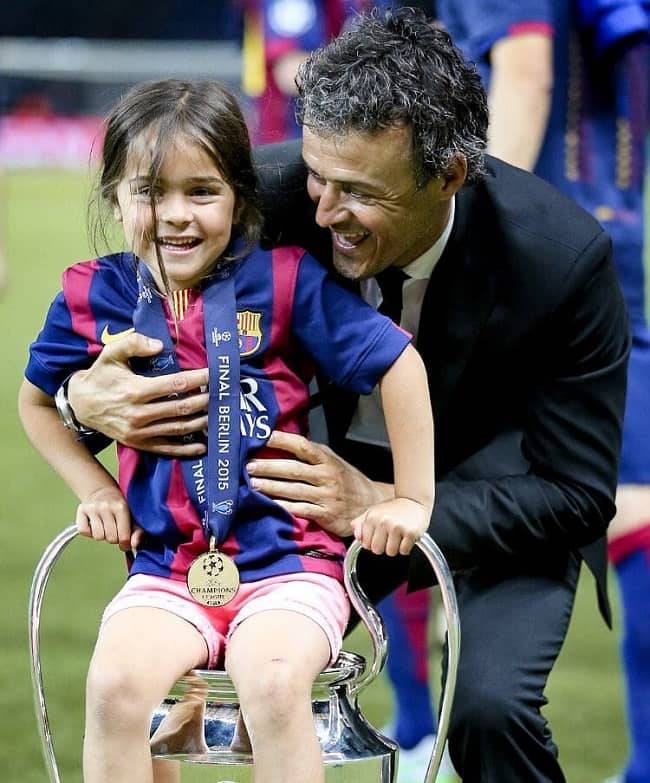 For more than two decades, the couple has successfully kept their marriage status, and their bond is still going strong. Moreover, this football manager is not a part of controversy or rumors and focuses on his personal and professional career.