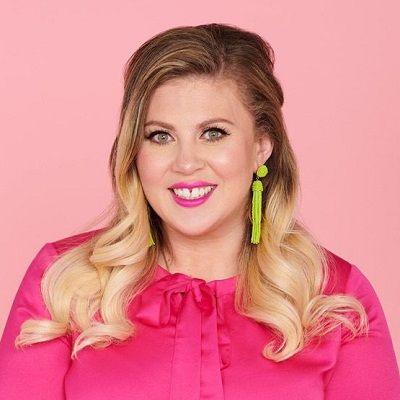 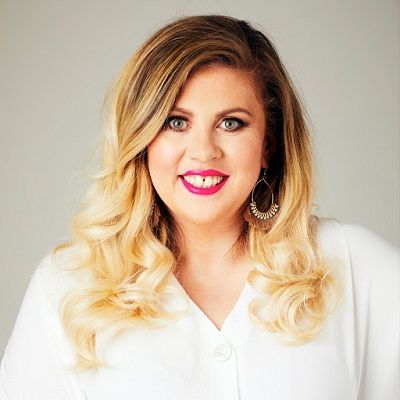 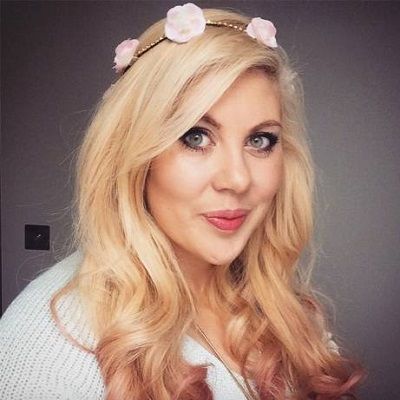 Louise Pentland was born on 28 April 1985 and she turns 35 years old as of April 2020. Similarly, her hometown is Northampton, England and her full name is Louise Alexandra Pentland. She has not revealed her parents’names but she has shared that her mother passed away due to metastatic breast cancer, which Pentland goes into detail about in her October 2015 video, My Pink Hair Story.

Later, Pentland’s father remarried and she suffered mental and physical abuse from her stepmother. Similarly, while at school at Northampton High School, she experienced bullying. She later went on to graduate with a Bachelor of Science with Honours in Psychology and Biology. She graduated from Liverpool John Moores University in the year 2006.

She has not mentioned anything about her siblings and other family members. Her nationality is British but she has not shared her ethnic background.

Louise Pentland is a Youtuber, blogger, and author. For her Youtube videos, she mostly focuses on motherhood, beauty, and lifestyle vlogging. She is also popular with her online pseudonym SprinkleofGlitter or SprinkleofChatter. However, she publicly disavowed these usernames in favor of using her own name in 2016.

The name she may not ring a bell immediately but if you are a regular on YouTube and is a fashion and makeup enthusiast, then there is a high chance you might have come across her super successful channel. Her channel has over 2.36 million subscribers with the number of views in the billions. Her accounts on other social media platforms are just as sought after as her YouTube account. Both her Instagram and Twitter currently have followers in the range of 2 million and over.

She has been a fashion and beauty blogger for quite some time and recently she has transitioned into the role of author and fashion consultant. She is the poster girl of plus-sized women and has been the perfect advocate of women with different body types. She has cast herself perfectly into the various roles she has embraced and her channels have seen a totally bold makeover over the years which the viewers have embraced whole-heartedly.

Further, she has also maintained her blog for quite some time and it has given plus-sized fashion addicts. She has ridden high on the peaks of success with multiple tie-ups with fashion ranges, makeup franchises, and lifestyle brands apart from her earnings from YouTube. 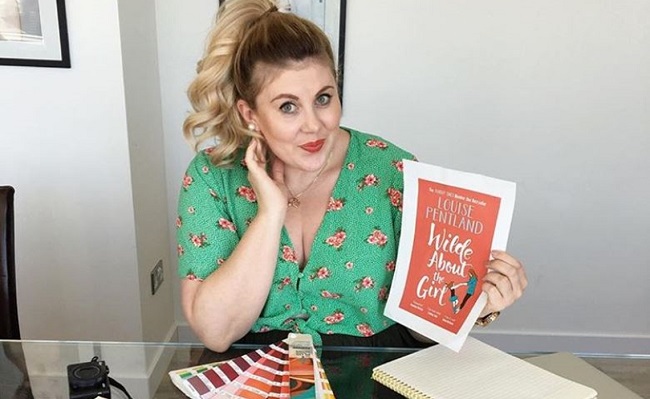 She sort of stumbled upon her successful career as a beauty blogger and vlogger. She worked in various office roles in corporate scenes. At that time, she started a blog about Do-it-Yourself interior decoration hacks and crafts as a hobby. To keep up with the theme of the blog she named the blog “Sprinkle of Glitter”. Soon, the blog gained popularity and become a go-to place for glitter addicts.

The success of her blog encouraged her to move over to other social media platforms with better reach. Hence, she eventually branched out to start her YouTube channel in 2010. She created the self-titled channel on 19 January 2010 and a secondary channel named “SprinkleofChatter” on 26 July 2012. At present, her main channel has 2.36 million subscribers and the secondary channel boasts around 1.08 million subscribers.

She kept the name of her blog for her channel as well. Since she had her wedding with Matt the same year, her DIY crafts were for a pre-wedding preparation regime. She started off her videos with the trademark greeting “Aloha Sprinklerinos” in her trademark warm and friendly tone. This instantly connected with the viewers.

Moreover, Louise began her channel with instructional videos for interior decorating and DIY stuff. She then moved on to fashion. Being pregnant at the time, she made a lot of vlogs about fashion and outfit choices for pregnant women. She paid special attention to her size category and her fashion advice mainly centered on fashion for plus-sized women and especially plus-sized pregnant women who often struggle to continue a fashionable existence during their pregnancy.

Her earliest vlogs also detailed her pregnancy journey, what she did, what she ate, and how she felt in general. She took to calling her unborn child as Baby Glitter and the audiences loved that introduction for her daughter Darcy. She portrayed to her viewers that pregnancy need not necessarily deter your fashion aspirations and she demonstrated that quite aptly by trying on different nail arts or trying on the latest trends in hair coloring.

Being pregnant and a new mum did not deter her from taking on the world; she went to London to meet with her fans and even did a little tour of the theme parks. Her daughter, Darcy, featured in a lot of her earlier videos, and viewers loved seeing her doing cute baby things. She featured in some baby outfit videos and cute baby accessorizing videos that she uploaded in her channel. In between baby videos, she uploaded videos of her makeup hauls and impromptu Outfit Of The Day (OOTD) videos.

She also kept it real most of the time and it was apparent that being a new mum does not leave much room in your life for stuff like fashion and makeup. She held on to her passion and kept on sharing her beauty, fashion, and lifestyle tips. In the process, she often collaborated with other YouTubers.

Zoe Sugg of the channel Zoella has been featured quite frequently in her channel and the two of them have created multiple videos together on makeup and fashion. Other Youtubers that she has collaborated with include Alfie Deyes, Tanya Burr, Dan Howell, and Troye Sivan among many. 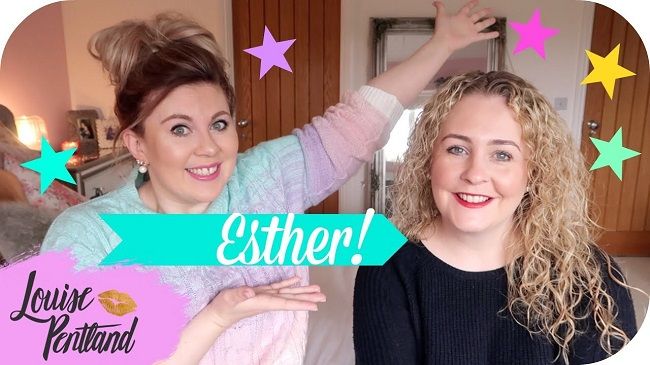 Further, she has gone on to several tours around the UK and the world promoting her channel and meeting with her fans. Moreover, several media outlets have also interviewed her and she has stated her stand as a feminist quite vocally.

Then in July of 2015, Louise published her first book titled Life with a Sprinkle of Glitter with Simon & Schuster Publishing. This book is about little tips and tricks about living a better and more fulfilling life. She created the book with her own life experiences.

Moreover, she followed this literary debut with another book in the same year. It is a book named Sprinkle of Glitter 2016 Diary: Have the Best Year of Your Life! and it is a sort of collection of her life stories and experiences. She published the second book through Faber and Faber Publishing.

Additionally, her debut novel is Wilde Like Me: Your ultimate feel-good summer read!. She published it in June 2017 and published its sequel Wilde About The Girl in August 2018. Then the third and final book in the series is titled Wilde Women, which was published in September 2019. Bonnier Zaffre acquired rights to these novels in 2016.

The same year, she also collaborated with plus-size clothing brand SimplyBe and successfully launched her own style of fashion in the e-commerce portal.

Then in November 2019, she announced her own podcast, Mothers’ Meeting with Louise Pentland, with episodes focusing on “offering insight into the parenting styles, personal struggles, and points of view of some of Britain’s best-loved mums”. The first episode featured Angela Scanlon and Emily Norris. Her other guests include Konnie Huq, Katie Piper, and Nadia Sawalha.

The content in her channel is very upbeat and feel-good, just like the creator herself. She takes on life with all of its challenges and is just not ready to get put down. Similarly, she is an inspiration to millions of women around the world in embracing their plus-sized bodies and in instilling the belief that just because you are curvy you need to give fashion and beauty a miss. She is never afraid to be real to her viewers and has shared her darkest time and happiest moments with them.

Furthermore, in September 2016, she decided to do a total overhaul of the content on her channel and blog. She announced that she would from then on concentrate on more adult stuff than a rather teensy and glittery theme that she had held onto for so long. As a result, her recent videos reflect her mood and have been centered more on adult topics.

Louise Pentland married Matt Watson on 4 September 2010. The couple had their daughter named Darcy Jane Watson in April 2011. However, they separated in mid-2014. Nevertheless, both stated in 2015 that they remained on good terms. Moreover, Matt is a school teacher.

At present, she is in a romantic relationship with Liam O’Neill. The lovers share a daughter named Pearl Jane Pentland. She was born in January 2018. Furthermore, the lovers announced their engagement in March 2020. 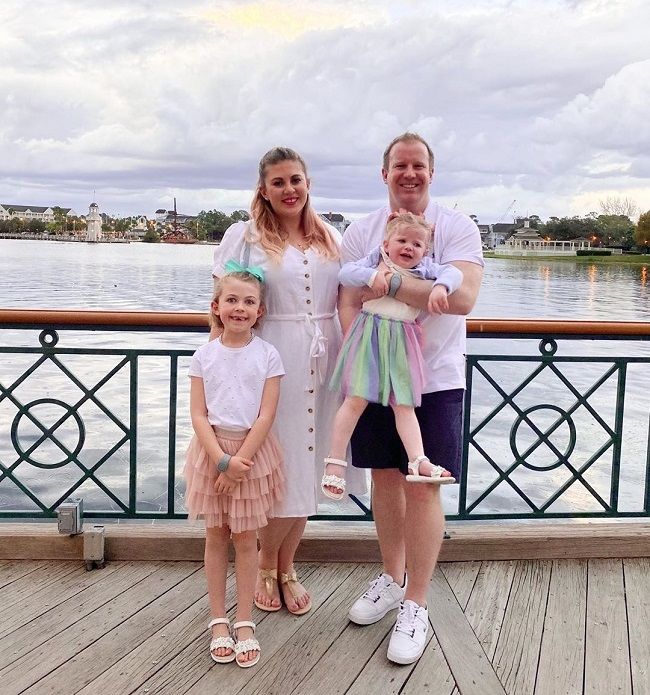 Caption: Louise Pentland on a trip wtih her daughters and fiancee. Source: Instagram

There is no exact information regarding Louise’s exact height, weight, and other body measurement details like chest-waist-hip, dress size, shoe size, etc. Nevertheless, she has often openly talked about being a plus-sized woman.

She also did collaborations with plus-size clothing brand SimplyBe and successfully launched her own style of fashion in the e-commerce portal. Moreover, she has hazel eyes and blonde hair which she occasionally dyes into colors like pink and peach among other colors.

Talking about Louise’s social media presence, she joined Twitter in October 2010 and so far has 2 million followers. Similarly, on her Instagram handle @louisepentland, she has 2.4 million followers and 4576 posts shares as of August 2020. She also has a Facebook page with 944k followers and she has two Youtube channels as well.

Her main channel, also her self-titled channel, was previously named “Sprinkleofglitter”. It has 2.36 million subscribers and 184,511,136 views at the time of writing her biography. Moreover, her second channel “SprinkleofChatter” has garnered 1.08 million followers and 11,941,076 views at present. She also has her own blog too.

Moving on, she has a net worth estimation of around $1.5 million dollars. She earns through her involvement in blogging, vlogging, Youtube videos, endorsements, clothing brand, writing, and much more.