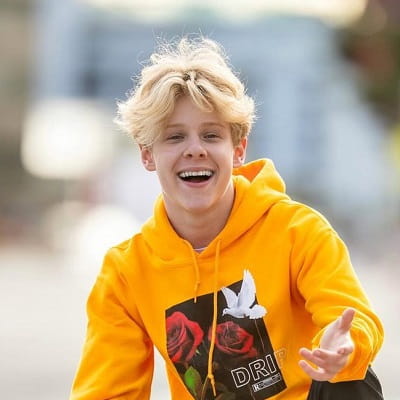 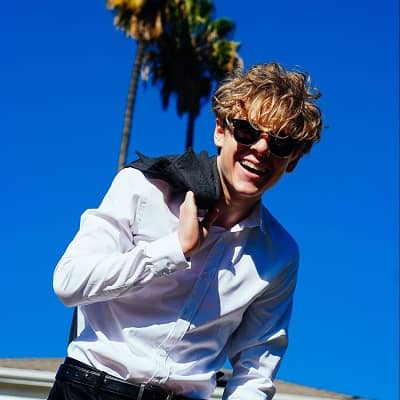 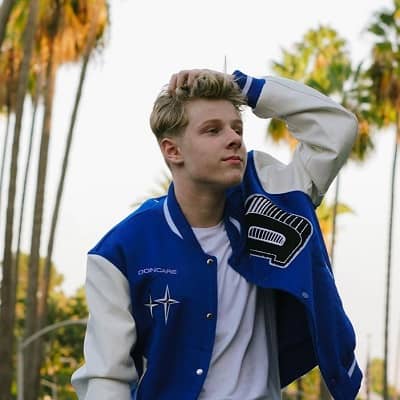 Lev Cameron Khmelev is a young American actor, dancer, and social media personality. Lev Cameron Khmelev has appeared in several dance competitions and reality shows including “Dancing with the Stars: Juniors”, “So You Think You Can Dance: The Next Generation”, and “Little Big Shots” among others. He has also appeared on “Evil Things” and “My Haunted House” as an actor.

Lev Cameron Khmelev was born on October 11, 2005, and his age is currently 15 years old. He is a citizen of France and his zodiac sign is Libra. At some point, he moved to the United States with his family. 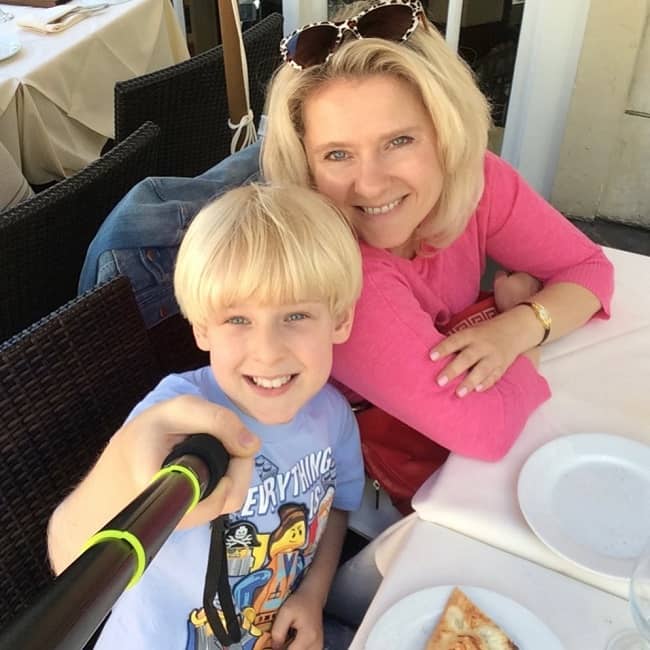 Caption: Lev Cameron Khmelev posing for a photo with his mother in an old photograph. Source: Instagram

Lev Cameron Khmelev is professionally a dancer. He began dancing when he was only five years old and eventually realized that he wanted to do it for the rest of his life after just one week of lessons.

He initially received training in the ballroom style. He eventually was exposed to the training of other styles of dancing only in the year 2019. As he takes online courses, he has been able to balance his education with his dancing.

He became a pro dancer on Dancing with the Stars: Juniors in the year 2018. His celebrity partner on it was Master Chef Junior winner Addison Osta Smith.

The dancers’ duo were mentored by South African dancer Keo Motsepe. On 7 October 2018, he and Smith performed cha-cha-cha and were one of two couples eliminated in the first round. Another couple was the professional dancer Hailey Bills and her celebrity partner and Sarah Palin’s grandson, Tripp Easton Mitchell Johnston Palin. 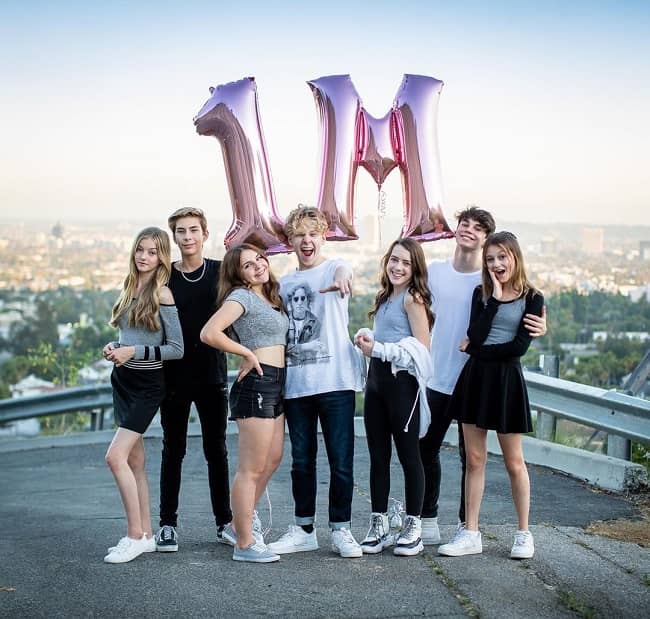 Caption: Lev Cameron Khmelev celebrating 1 million subscribers’ milestone with his near and dear ones. Source: Instagram

Earlier in 2016, he was in the Top 30 of So You Think You Can Dance: The Next Generation. He took part as a contestant and this show is the 13th season of Fox’s dance competition reality series.

Then in 2017, he appeared on Little Big Shots with his dance partner Sofia Sachenko. He has also acquired more than 1 million subscribers on his “Lev Cameron” YouTube channel.

Similarly, he also does acting and he has appeared on the shows like Evil Things and My Haunted House. He is also popular on Instagram in which he has earned over 1.1 million followers on his @itsmelev account. Then in 2016, he was in Justin Timberlake’s music video Can’t Stop The Feeling.

Furthermore, he debuted as an actor in the 2015 short film And the Tiara Goes To… He portrayed the role of a character credited as the basketball boy/schoolboy. In the following year, he guest-starred as Henry in an episode of  My Haunted House. It was in season four of the FYI’s horror series.

Then in the year 2019, he made his cinematic debut. It was in the comedy-drama film Ham on Rye. The director of this drama film is Tyler Taormina and the film revolves around a group of teenagers who undergo a bizarre rite of passage at the local deli. he played the role of a character named Squirgly Dag. 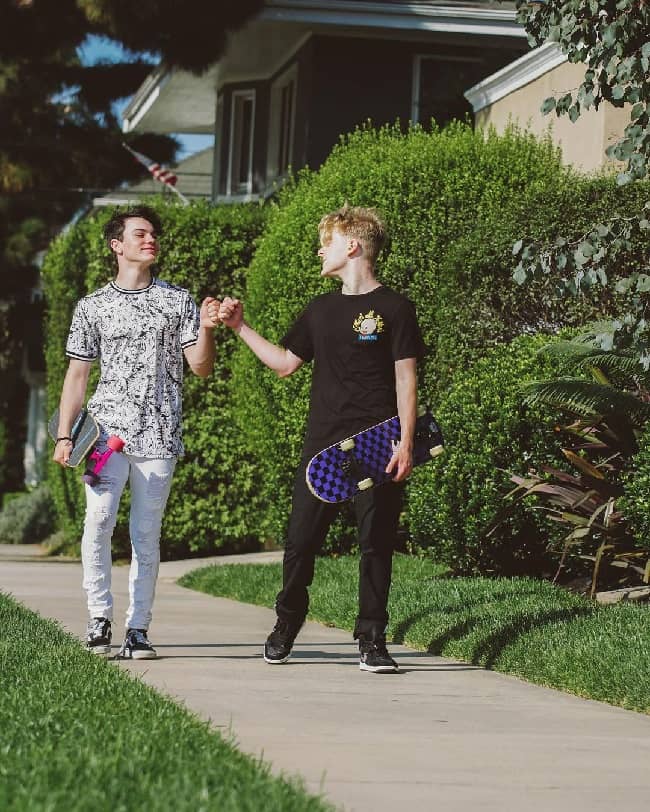 In the same year, he also acted in the short film Boys Ain’t Shit and the music video for Indi Star’s song Just Might Dance. He has revealed that tap and contemporary are the most challenging dance styles, personally. He names John Travolta, Timberlake, Marty Kudelka, and Kenny Wormald as his role models.

The oldest post on his Instagram handle dates back to March 8, 2015. He also set up his self-titled YouTube channel on January 1, 2018. The first video shared in the video is titled My Crush Reacts to Funny Assumptions about Me “Instagram Challenge” | Lev Camron, Piper Rockelle, and he shared this on November 17, 2019.

Lev Cameron Khmelev is in a romantic relationship with Piper Rockelle. Even before dating each other, Piper appeared on his Youtube videos occasionally and he introduced Piper as his “crush” in those videos. Then on Valentine’s Day 2020, he asked Piper to be his valentine. Soon after, beginning in May 2020, the duo started dating each other.

Piper Rockelle is also a web star who posts a range of fun videos to her popular YouTube channel. She has earned over 6 million subscribers on her channel. Additionally, Piper is also a singer, dancer, and gymnast. Piper also starred on the Brat series Mani and on the reality series Piperazzi. 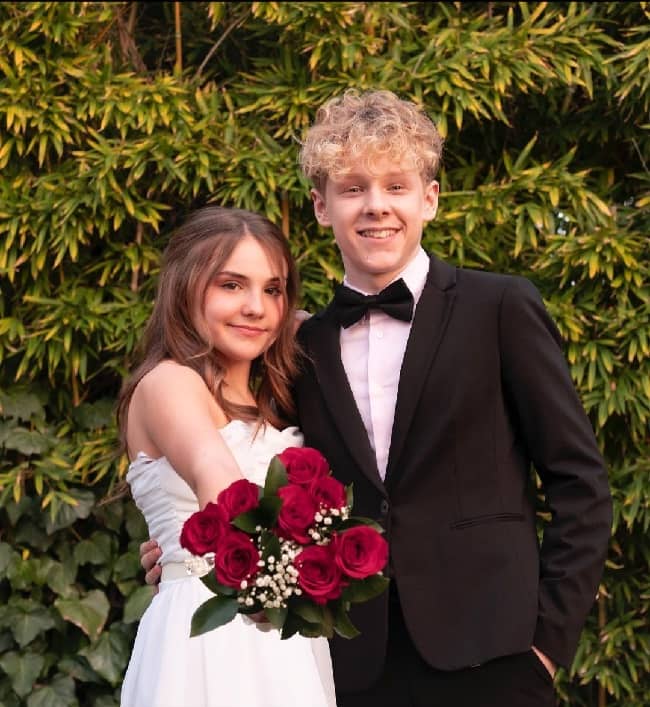 Lev Cameron stands tall at a height of approximately 5 feet 8 inches and his weight is around 62 kgs. Other than this, there is no information regarding his biceps, dress size, shoe size, chest-waist-hip measures, etc. Moreover, he has blue eyes and blonde hair color.

Talking about his social media presence, Lev Cameron Khmelev goes by the username @itsmelev on Instagram. He has earned over 1.2 million followers and he has shared exactly 793 posts while writing this biography. Similarly, he created his “Lev Cameron” Youtube channel on January 2, 2018.

So far, this channel has earned over 127 million views and more than 1.35 million subscribers and counting. On his Youtube channel, we can find great challenge videos including last to’s, 24 hours, reactions, pranks, dances, song, and many more. Moving on, he has a net worth estimation of approximately $100k to $1 million dollars.