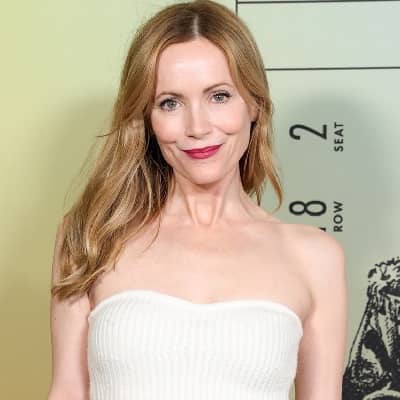 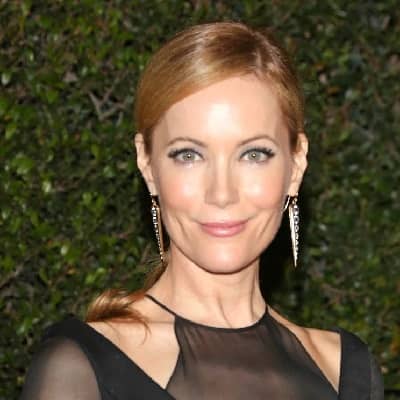 Leslie Mann(Leslie Jean Mann) is an American actress known for her performances in comedic films. Leslie Mann has acted in films such as George of the Jungle, Big Daddy, The Cable Guy, and many more.

Leslie Mann was born on the 26th of March, 1972, in San Francisco, California, USA. Mann is 50 years old as of 2022. She was born to mother Janet Mann. She does have a father but she does not know him and doesn’t have any relationship with him. Mann has three older stepbrothers and two siblings. She and her siblings grew up in Newport Beach. Mann enrolled at Corona del Mar High School in Newport Beach.

She developed an interest in acting in high school. She also started attending auditions whilst in high school. Leslie studied acting at the Joanne Baron / D.W. Brown Acting Studio and comedy improv troupe at The Groundings. She attended college to study communication but she later dropped out to focus on acting. At the age of 18, Leslie appeared in a bunch of tv commercials. She got her first break when she was cast in the film The Cable Guy for the female lead in 1996. She then appeared in Sam Weisman’s George of the Jungle the following performance of The Cable Guy. Leslie then appeared in several movies such as Big Daddy, Orange County, and The 40-year-old virgin. She also appeared in the movie ‘Freaks & Geeks’.

When Leslie Mann was cast in the romantic comedy film ‘Knocked Up‘, she had the biggest hit of her career. Mann was catapulted into the major leagues of comedy with the film, which received worldwide recognition and grossed over $200 million at the box office. Her contribution to the picture was widely appreciated.
Leslie Mann starred alongside Adam Sandler and Seth Rogen in the comedy picture ‘Funny People‘ in 2009. The film was one of the year’s biggest hits and grossed more than $100 million worldwide. Many reputable magazines labeled the picture among the best of the year, and Mann’s performance was praised by several critics. She then starred with Ryan Reynolds in another comedy film ‘Change up‘,2 years later. In 2012, she has also voiced a character in ParaNorman, an animated 3D stop-motion film.

After the success of ‘Knocked Up‘, Director Juda Apatow decided to make a sequel ‘This is 40’ in 2012. The sequel was well-received, and Mann’s performance as “Debbie” was widely praised by critics. Leslie also won an award for her performance. She was cast alongside Emma Watson in Sofia Coppola’s film ‘The Bling Ring’ the following year. Caption: Leslie with the cast of The Bubble Source: Instagram

Both Mann and Apatow are longtime supporters of the non-profit organization 826LA. The organization is focused on encouraging and helping in developing the writing skills of disadvantaged youth. They’re also associated with the UCLA Rape Treatment Center’s Stuart House. The organization helps sexually abused children and their families.

The Bogart Pediatric Cancer Research Program acknowledged Mann and Apatow’s philanthropic services in 2012, awarding them the “Children’s Choice Award” for their work with children and families struggling with pediatric cancer. They were also recognized and honored by The Fulfillment Fund at its annual benefit gala in 2009.

Leslie Mann is a married woman. She is married to famous director and producer Judd Apatow. The couple first met while auditioning for The Cable Guy. They got married on June 9, 1997. The duo shares two daughters- Iris and Maude. Both of the children have appeared in the film Knocked up, Funny People, and This Is 40 as children of Mann’s character. Mann and Apatow have been happily married for 25 years as of 2022. They spend quality time with each other. 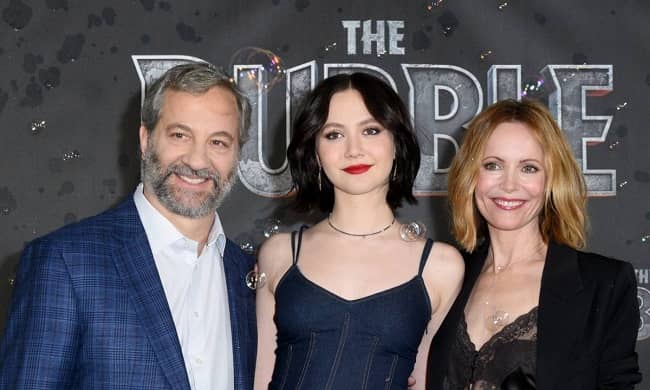 Caption: Leslie with husband Judd and daughter Iris at the promo of The Bubble Source: Hello Magazine

Leslie has a height of 5 feet 7 inches and she weighs 54 kg. Mann has blonde hair and her eyes are blue in color.

Leslie Mann earned her fortune from a successful acting career. Mann’s total net worth is $20 million while her husband’s net worth is $150 million.