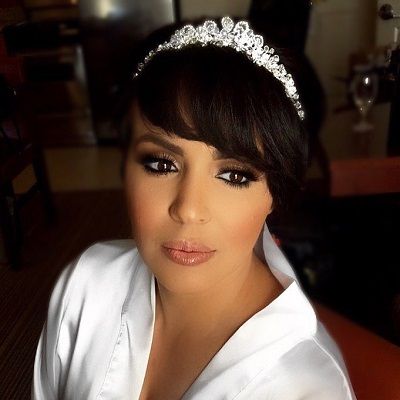 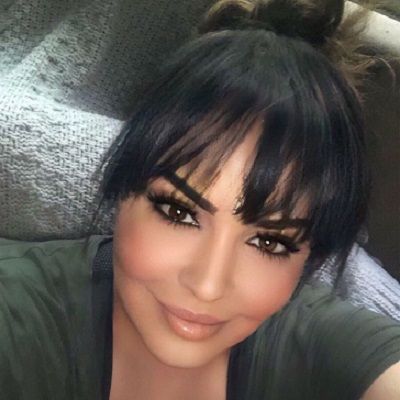 Layla El Barrami was born on 25th June 1977 and is currently 45 years old. Her zodiac sign is Cancer. Likewise, she was born in London, England, and currently resides in Miami, Florida. Similarly, she holds British nationality and belongs to a mixed ethnic group as her father has Spanish descent and her mother is of Moroccan descent. However, there is no information about the religion she follows. Regarding her family members, there is no information about her parents. However, she has often shared pictures of her mom and siblings on her Instagram account and has two sisters. 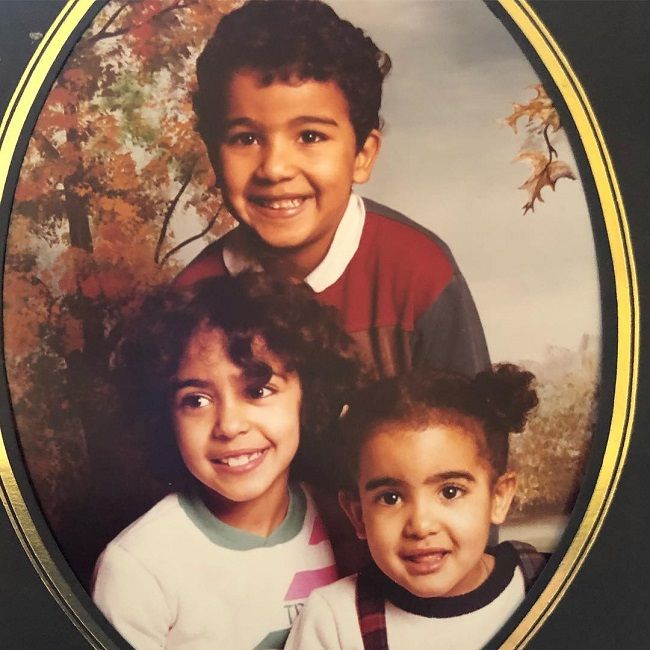 Caption: Childhood pictures of Layla with her siblings. Source: Instagram

There is not much given regarding her childhood. Furthermore, about her educational background, she attended the Performance Arts College in London.

Layla made her professional start as a dancer in the Carnival Cruise Lines in the Miami Heat franchise of the National Basketball Association. As part of the Miami Heat dance troupe, she received the championship ring. She became the backup dancer and appeared on stage with John Legend. Likewise, she also danced for Kayne West at the MTV Video Music Awards.

She entered professional wrestling in the year 2006 after her trainer suggested to try the ‘WWE Diva Search contest’ for $250,000. Soon she became one of the finalists and won two individual competitions, an obstacle course, and a talent competition. Followed by this, she won the overall competition. She made her first official WWE appearance on the SummerSlam in a backstage segment with several other divas. It is the annual SummerSlam professional wrestling pay-per-view event. Followed by this in September 2009, she made her debut as a member of the SmackDown! with Michelle McCool.

Likewise, at October’s No Mercy PPV event, she tricked The Miz and embarrassed him with the lap dance from Big Dick Johnson while he was blindfolded and expecting it to be from her as a birthday gift. Followed by this, along with SmackDown! Divas she participated in a dance contest and became the winner. Likewise, she made her in-ring debut in a ‘Diva Trick-or-Treat Battle Royal’. However, the match ended controversially as she was pulled away by The Miz from the ring and then allowed Kristal to win.

In addition to this, she teamed with Big Vito in a loss to The Miz and Kristal in the ‘Mixed tag team match’ episode of SmackDown. Following the feud with Kristal, she had her debut in a singles match in which she lost to Kristal. Likewise, on the last match of SmackDown! brand, she teamed up with Ashley Massaro leading to defeating Kristal and Jillian Hall in the tag team match.

Similarly, on 23rd January 2007, she moved to the Extreme Championship Wrestling brand in which she joined Brooke and Kelly Kelly and formed Extreme Expose. She choreographed the weekly dance segment. However, on November 1stafter Brooke was released from her WWE contract, the group was dissolved making her enter the ongoing rivalry with Kelly including active-in-ring roles. For the 10-Diva tag team match at Survivor Series, her team lost. With this, she allied with Victoria and Lena Yada continuing her feud with Kelly.

Likewise, in the same month, she became part of the winning team in six-on-six Divas matches at the Backlash PPV. Followed by this, on the sixth WWE draft in the year 2008, she was drafted to the RAW brand. She made her debut in the tag team match along with Jilian Hall losing to Kelly and Mickie James. Likewise, she entered the storyline along with Jamie Noble defeating his opponents. With this on the following episode of Raw, she made Noble worthy of the Regal. Likewise, over the next few months, she competed in the matches spending her time managing Regal and was present at ringside defeating Santino Marella. With this, she won the WWE Intercontinental Championship.

Followed by this on the seventh WWE draft, Layla was drafted to the SmackDown brand as part of the Supplemental Draft. In this, she lost in both dance and arm wrestling matches in a feud with Eve Torres. After the defeat, the rivalry ended between Eve and her on the WWE Superstars. Followed by this, she formed an alliance with Michelle McCool which was later named LayCool the professional wrestling tag team. Likewise, at the Survivor Series PPV, Cool’s team lost to James’ team. With this at TLC (Tables, Ladders, and Chairs) she interfered in the WWE Women’s Championship in which the match was between McCool and James.

With this, in February, LayCool defeated James in the handicap match by Official SmackDown Consultant Vickie Guerrero. Followed by this, on the Elimination Chamber PPV, LayCool defeated Raw’s Gail Kim and Maryse in the Divas tag team match. Similarly, in the two-on-one handicap match, LayCool faced Beth Phoenix in which she pinned Phoenix winning the Women’s Championship for the first time. She was the first British woman to win the title. Followed by this, LayVool became the co-women’s champions.

Likewise, they played various matches like ‘Money in the Bank PPV’, ‘WWE Divas Champion Melina’, ‘WWE Unified Divas Championship’, and ‘Survivor Series’. However, following the loss of the Divas Championship, they appeared in a series of vignettes attending couples therapy. Likewise, on the 22nd April episode of SmackDown Cool attacked her during one of their storyline therapy session. Further, she lost a match to Eve and was attacked by Cool. With this, LayCool faced each other on the no count-out, no disqualification, loser leaves WWE match on the Extreme rules in which Layla won.

However, after this, she suffered a knee injury at the Extreme Rules in which her Anterior cruciate and Medical collateral ligaments were torn and it required surgery.

Likewise, she competed in several matches with AJ Lee, Kaitlyn, Alicia Fox, and Emma. Similarly, on the rematch of SmackDown in July, she along with Rae attacked Fandango, and both allied. With their first match as a team, they called themselves the Slayers. With this, they won their first match as a team defeating Rosa Mendes and Natalya. They became part of Team Paige at the Survivor Series but due to elimination, they lost the match. In January 2015, she underwent surgery and returned on the Main Event episode defeating Emma in the Singles match. Followed by this, on 29th July, she decided to retire as a professional wrestler.

After winning the Diva Search, Layla modeled for several magazines like ‘King’, and ‘And smooth’. Likewise, she became the cover girl for the first issue of the magazine ‘Liquid’. Further, she appeared in ‘Flex Magazine’s February 2009 issue along with Beth Phoenix and Candice Michelle. Additionally, she posed for the men’s lifestyle magazine FHM along with members of Extreme Expose. Likewise, she has appeared in the music video for ‘Throw It On Me’ by Timbaland and The Hives along with other WWE Divas. Similarly, she appeared on five episodes of ‘Family Feud’ and a week’s challenge on ‘Project Runway’ along with other WWE divas.

She is a model, dancer, and professional WWE diva. She has achieved various recognition after winning wrestling matches. However, regarding her net worth, she has not shared her exact net worth from her career on social media.

Regarding her relationship status, Layla is straight and is married to fellow Richard Young. They married in the year 2015. 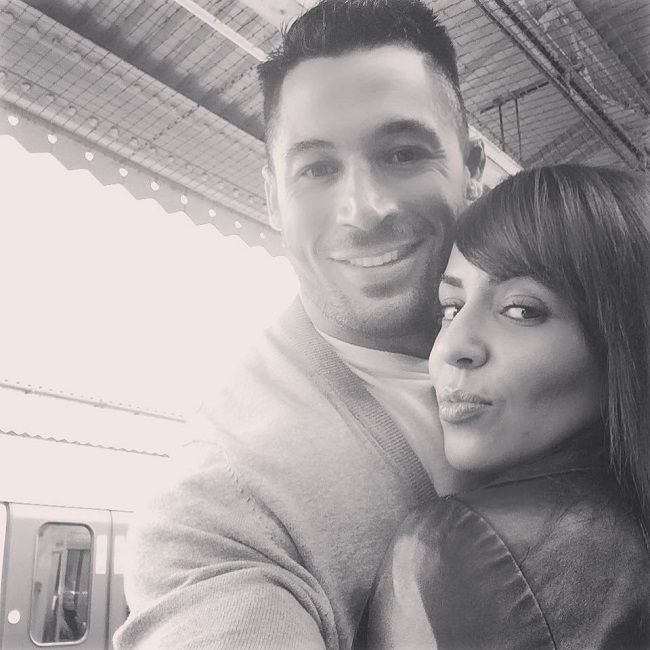 She stands at age of 5 feet 2 inches (62 inches) tall and weighs around 54 kg (119 lbs). Likewise, her vital stats is 36-26-36. Looking at her physical appearance, she has a pair of beautiful light brown eyes with long brown hair.