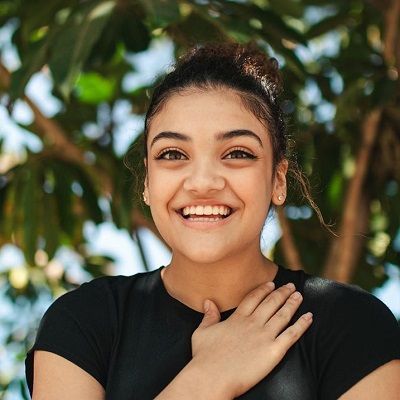 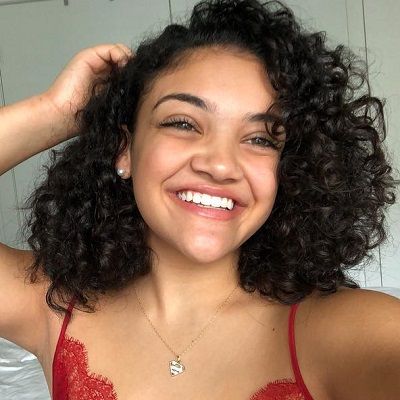 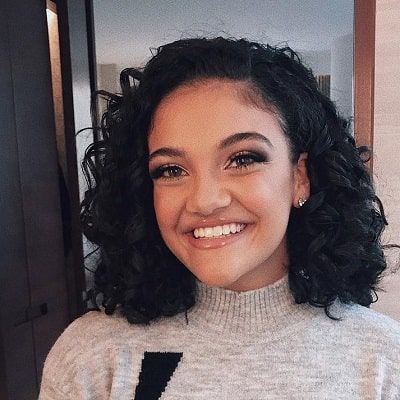 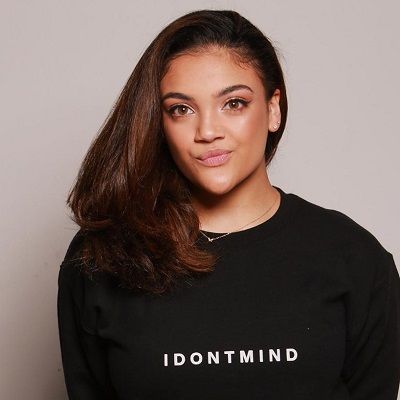 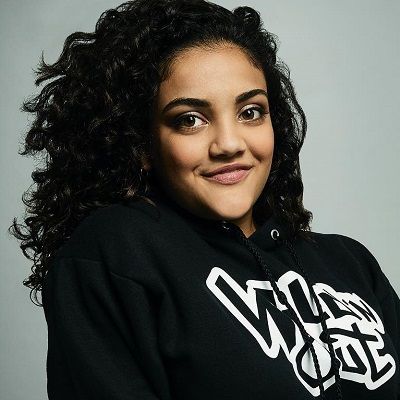 Laurie Hernandez is a young American Gymnast. Laurie Hernandez has represented the USA in several Olympic games winning gold twice. She is also a television personality who has appeared as a contestant on “Dancing with the Stars” and also on several shows as a celebrity guest, co-host, etc.

Laurie Hernandez was born on 9 June 2000 and she celebrates her 20th birthday in 2020. Likewise, her full name is Lauren Zoe “Laurie” Hernandez. She is originally from Old Bridge Township, New Jersey, and her parents are Wanda and Anthony Hernandez. Her mother is a social worker and she has also served in the Army Reserves whereas her father is a court officer in New Jersey.

Laurie also has a sister and a brother named Jelysa and Marcus. Both her siblings are elder than her. Further, her grandmother’s name is Brunilda Hernandez, who lost the battle to both cancer and Alzheimer’s disease in November 2016. This was right in the middle of Laurie’s season of Dancing with the Stars.

Talking about her educational background, Laurie attended Abeka Academy High School in Old Bridge, New JerseyHer brother graduated from Rutgers University in 2018. Moreover, she is a citizen of the USA and she is of Puerto Rican descent.

When she was only six years old, Laurie’s parents signed her up for gymnastics classes in her hometown of Old Bridge. There, she came to the attention of Maggie Haney. Maggie later became her coach and manager. Laurie then attended the USA Gymnastics development camps at the early age of nine. She also excelled there.

Then in the year 2014, Laurie Hernandez got injuries including a dislocated right kneecap and a fractured wrist. A year later, Laurie was back in action and performed in four competitions. She then earned medals in every event and an all-around gold.

Later in the year 2015, as the junior gymnastics champion, Laurie didn’t qualify for the U.S. team for the world championships. It was due to her age at the time. Then in 2016, she made her debut as a senior gymnast. Back then, she earned the bronze medal in the all-around at the City of Jesolo Trophy in Italy, among others.

In July 2016, Laurie competed in San Jose, California for a spot on Team U.S.A. She is popular for her signature dance moves, effervescent personality, and expressive face. Due to all these qualities, Laurie captivated both the audience and judges alike. In qualifying for the team, Laurie joined Gabby Douglas, Aly Raisman, Simone Biles, and Madison Kocian at the Rio de Janeiro Olympic Games in August 2016.

Moreover, Laurie Hernandez is one of the only handful of Latinas to represent the U.S. since 1936. Some other notable Latinas who previously represented the US are Tracee Talavera, Annia Hatch, and Kyla Ross. Likewise, at the age of 16, Laurie was the youngest member of the U.S. women’s gymnastics team. She also announced that she would turn professional days before the start of the Olympic Games in Rio.

At the team competition, Laurie delivered impressive performances hence scoring 15.100 on the vault, 15.233 on the balance beam, and 14.833 on floor exercise. This helped the U.S. win gold during the event. Laurie Hernandez shared the victory with the above-mentioned members, i.e. Biles, Douglas, Raisman, and Kocian. The five of them are a team and they call themselves “The Final Five”. They are the third American women’s gymnastic team that won gold. They followed the team victories in the year 1996 and 2012. 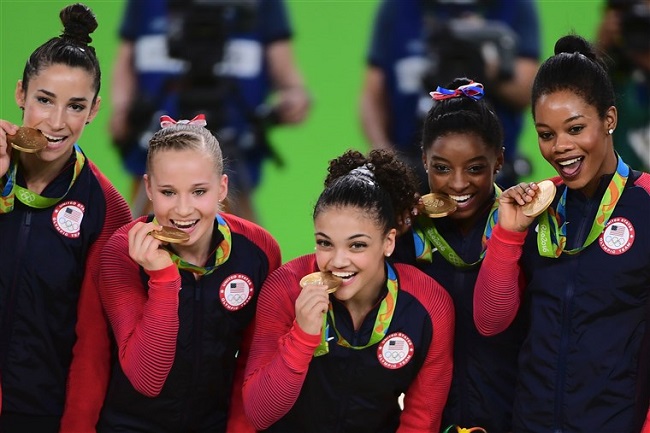 Caption: Laurie Hernandez winning gold for the US as a part of The Final Five. Source: NBC News

Clarifying the meaning behind the team’s name, Aly Raisman said on the Today Show, “We’re the Final Five because this is coach Marta Karolyi’s last Olympics and without her none of this would have been possible…We wanted to do it for her just because she’s there with us every single day. This is the last Olympics where there’s a five-girl team. The next Olympics is only going to be a four-person team.

Laurie is the dynamic gymnast who has become a fan favorite. Her expressive face and exuberance have earned Laurie the nickname “The Human Emoji.” Following the Olympics, she partnered with Val Chmerkovskiy and appeared on Season 23 of Dancing With the Stars. In November 2016, the duo won the competition and beat out Canadian race car driver James Hinchcliffe and his partner namely Sharna Burgess.

After the Olympics, Laurie Hernandez appeared on the television show Dancing with the Stars. This continued for the next four years. During this time, Laurie appeared on television and in the media as a show host and voice actor as well as a celebrity guest. Laurie then returned to gymnastics training in October 2018. It was after two years off and although she previously trained in New Jersey at MG Elite, she chose to switch gymnastics clubs and train at Gym-Max in California with coaches Jenny Zhang and Howie Liang.

In August 2019, Laurie said that she was training five hours per day, six days a week. She was invited to the national team training camp held from 15-18 November 2019. This was possible after spectating at the US Championships in August and then speaking to the team coordinator namely Tom Forster.

In January 2020, she said that she was focusing on meets beginning in late May 2020. These included the US Classic, US Championship, and US Olympic Trials. She did not attend the February national team training camp though she was invited.

On 29 April, her former coach, Maggie Haney, was suspended by USA Gymnastics for eight years due to abusive conduct. Laurie testified against her coach at the USA Gymnastics hearing and posted a message about her experiences on her social media without naming the coach.

Her coach publicly humiliated her for her weight, leading Laurie to binge and purge. She also forced Laurie to train and compete while injured. As of 2020, she still struggles with depression and disordered eating that began due to her coach Maggie’s abuse. Within the gymnastics community, the coach’s suspension was seen as progress for USA Gymnastics, and fans widely supported Laurie online for sharing her experience.

On 15 July 2018, Laurie Hernandez announced on her Instagram that she would co-host American Ninja Warrior Junior. Then on 11 September 2018, Laurie joined Jane Lynch and Tim Gunn in the Nickelodeon animated mini-series Middle School Moguls. For this, she lent her voice to a character named Valeria.

Moreover, Laurie Hernandez has also appeared on many talk-shows. Some of them are The Today Show, Good Morning America, The Ellen DeGeneres Show, Entertainment Tonight, The Tonight Show Starring Jimmy Fallon, Access Hollywood Live, Omg! Insider, Hollywood Today Live, and Stuck in the Middle among others.

Then on 24 November 2016, Laurie appeared on the 90th anniversary of the Macy’s Thanksgiving Day Parade. Laurie was also on the Spirit of America float. November 24-26 2017 onwards, Laurie Hernandez was the special guest narrator for the Candlelight Processional at Epcot Center in Disney World.

On 31 October 2016, she announced her book I Got This: To Gold and Beyond via Instagram. The book was out on 24 January 2017. Then on 1 February, Laurie Hernandez shared on Instagram and Twitter that she became a New York Times Best Selling Author for the same book. Likewise, in 2018, she published a similar children’s book for younger readers and its title is She’s Got This. This book consists of illustrations done by Nina Mata.

Achievements, Honors, and Net Worth

Laurie Hernandez is popular for her clean form and technique. She is also known for her expressive choreography and her entertaining floor routines. Likewise, among many, Laurie won two gold medals at the 2015 National Championships in Indianapolis and three at the 2015 U.S. Classic in Chicago. Moreover, she earned her first gold medal at the 2013 U.S. Classic competition in Chicago.

Then in June 2019, Laurie was inducted into the New Jersey Hall of Fame and on 1 January 2020, she was a Grand Marshal of the 2020 Rose Parade. Likewise, she shared in November 2018 that she was included in Forbes 30 under 30 list. Laurie also has a net worth estimation of approximately $2 million. 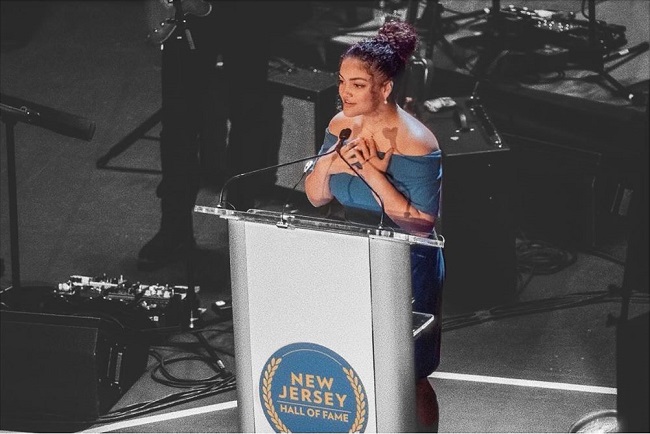 Caption: Laurie Hernandez became the youngest person to be inducted in the New Jersey Hall of Fame. Source: Instagram

Laurie Hernandez is most probably single at present. She has not shared much information regarding this issue. Likewise, Laurie Hernandez has also not shared any social media posts that might indicate her current relationships or affairs.

Moreover, she has maintained a clean public profile that is away from rumors, scandals, and controversies that might hamper her professional career and personal life. Nevertheless, Laurie Hernandez is sure to attract many lovers in her future through her talent, humor, and charms.

Laurie stands tall at a height of 5 feet 1 inch and weighs around 48 kgs. Likewise, her chest-waist-hip measures are 30-24-34 inches respectively. Laurie has a very flexible body as she is a gymnast since a very young age. Moreover, she has dark brown eyes and black curly hair.

Talking about her social media visibility, Laurie joined Twitter in June 2013 and so far has 604.6k followers. Likewise, her Instagram handle is @lauriehernandez and this account boasts 476 posts shares and 1.5 million followers.