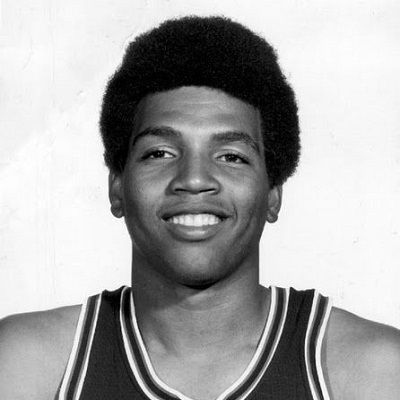 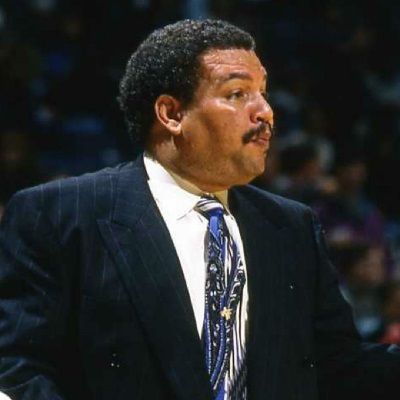 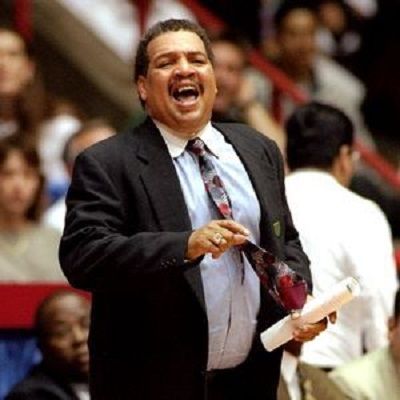 Larry Finch was an American professional basketball player as well as a coach. Larry Finch played and coached for Memphis Tigers among other teams. He also ran for the office of Shelby County Registrar even without any prior political engagements.

Larry Finch was born on 16 February 1951 in Memphis, Tennessee. His full name is Larry O. Finch. Sadly, he passed away on 2 April 2011 at the age of 60 years. There is no information regarding his parents and other family members.

He attended Melrose High School and later enrolled at the University of Memphis. He also played for the University basketball team and this is when he started gaining fame for his amazing skills in the game. Likewise, he is also associated with the University of Alabama at Birmingham. His ethnicity is African-American whereas his nationality is that of an American. 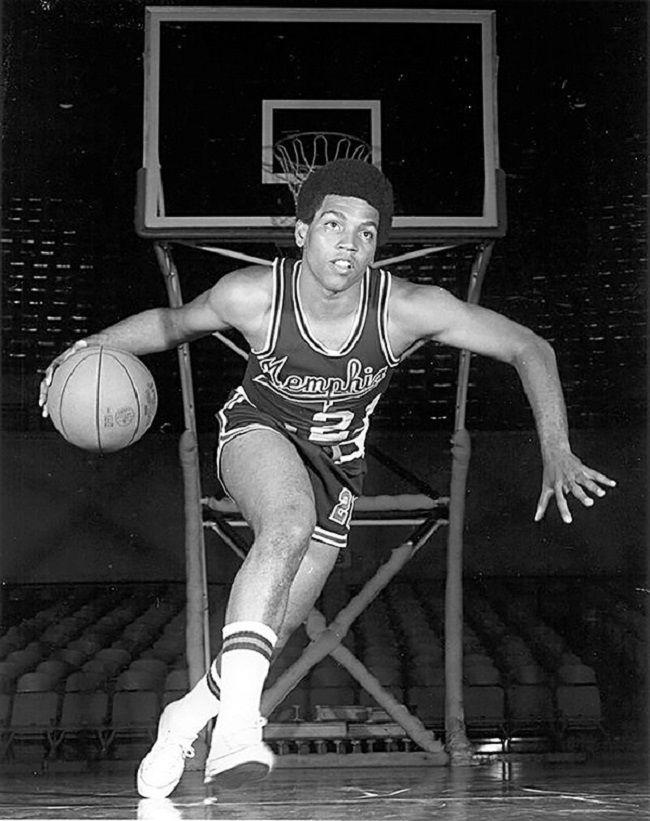 Larry Finch was a professional basketball player as well as a coach. He also ran for the office of Shelby County Registrar even without any prior political engagements. He was a player from 1970 to 1973, an assistant coach from 1979 to 1986, and head coach from 1986 to 1998 at Memphis State. During his time at Memphis State, he saw MSU compile a brilliant record of over 350 wins.

His dominance as a player attained a pinnacle in 1973 when the Tigers reached the NCAA Final Four. He was named to four All-America teams his senior year. He was also the “Missouri Valley Conference Player of the Year” two seasons in a row. Moreover, he is also considered “Mr. Basketball” in the city of Memphis.

He played basketball for Melrose High School in the Orange Mound section of Memphis. He later entered Memphis State and played basketball under the famed basketball coach named Gene Bartow. His decision to join the team was somewhat controversial for both Memphis’ black and white communities. It was because of the then-recent assassination of Martin Luther King.

The resultant heightened strain on race relations in Memphis. And it was no wonder very few local African-American prep stars were able to wear a Tiger uniform to that point. Some advised him not to join the Tigers, but he loved his hometown team. Hence, it didn’t matter whether or not this was an opportunity to do something even more meaningful than playing for his local university.

As he led the Tigers to new heights of success in basketball games, Memphians had a chance to see things less in black and white and more in Tiger blue and gray. In his senior year at Memphis State, 1972–73, Finch and Larry Kenon led the basketball team to the Final Four. In the championship game, he scored 29 points but lost to John Wooden’s UCLA Bruins. It was the game where Bill Walton went 21 of 22 from the floor. Moreover, he also became the only coach in NCAA history to lead his alma mater to the final four.

He graduated as the all-time leading scorer in Memphis history and he is currently the second all-time leading scorer for the University of Memphis. Los Angeles Lakers drafted him in 1973 in the fourth round. But he opted to join the local American Basketball Association team, the Memphis Tams. He played professionally for two years with the team Tams, the Memphis Sounds, the Baltimore Hustlers, and Baltimore Claws. 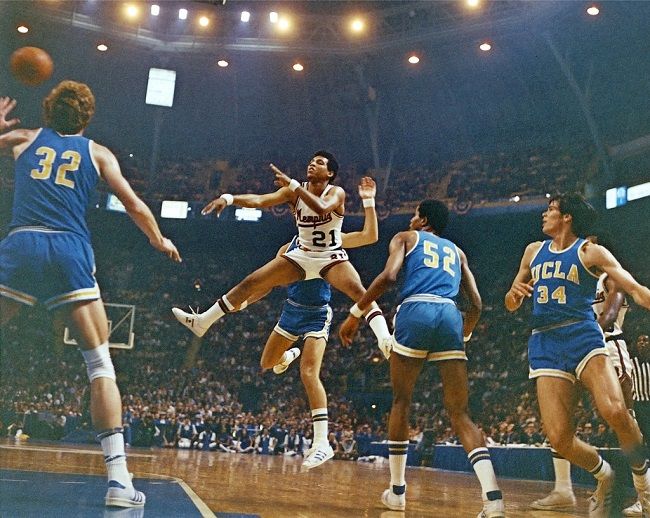 Caption: Larry Finch passing the ball in a game against UCLA. Source: Flickr.

He started coaching first at Richland Junior High and then at Messick High School. He then joined his collegiate coach, Gene Bartow, as an assistant at Alabama-Birmingham in 1977. Sometime later, he returned to his alma mater. As MSU head coach, his teams averaged around twenty wins per year and had eight post-season appearances. Further, his 1991-1992 Tigers reached the NCAA Final Eight. His awesome feats as a player and coach have earned him a special place in the history books of this proud city.

In the 1980s, he was an assistant coach for Dana Kirk at Memphis State. Dana Kirk was forced to leave Memphis State after violating NCAA regulations and becoming the subject of a criminal investigation. While asking for and getting immunity from prosecution in the Kirk trial, he became the head coach in 1986. He remained at the school, which was renamed the University of Memphis in 1994, until 1997.

Moreover, he further posted 10 out of 11 winning seasons, seven 20+ win seasons, and six NCAA tournaments. He recruited and developed prominent players like Elliot Perry, Penny Hardaway, and Lorenzen Wright. Moreover, his 1991–92 team led by Hardaway and David Vaughn went to the Elite Eight of the NCAA tournament. During his tenure, many basketball players began to graduate in high numbers.

As a player, he was known for his shooting prowess. The skills of the player remained intact throughout his coaching days too. He would routinely win games of H-O-R-S-E against his players and assistant coaches in long-distance shooting contests after road game practices.

Even while he was the head coach, he maintained connections to his roots. He also often visited Orange Mound barbershops and often delivered Memphis State posters and other team paraphernalia. in his hometown.

Despite his overall success, more and more local blue-chip recruits began leaving for other schools. During the mid-1990s, the recruits specifically left for Todd Day to the University of Arkansas and others to the University of Tennessee. While there was the Elite Eight team of 91–92, several of his teams were considered underachievers. One of them is the highly touted 1995–96 squad which lost to 12th-seeded Drexel University in the first round of the NCAA Tournament.

The school forced him to resign and they bought out his contract at the end of the 1996–97 season. The forced resignation was a public relations fiasco for the university and athletic director R. C. Johnson. They finalized the deal immediately following his final game in one of the concession areas of the Pyramid Arena.

Although a portion of the fan base had become disenchanted with him, even some of his detractors were critical of the way school officials handled it. He left as the school’s all-time winningest coach. It is a record that stood until John Calipari passed him in 2007–08. However, after they vacated all of the Tigers’ wins in the 2007–08 season, he recovered his standing as the school’s winningest coach. 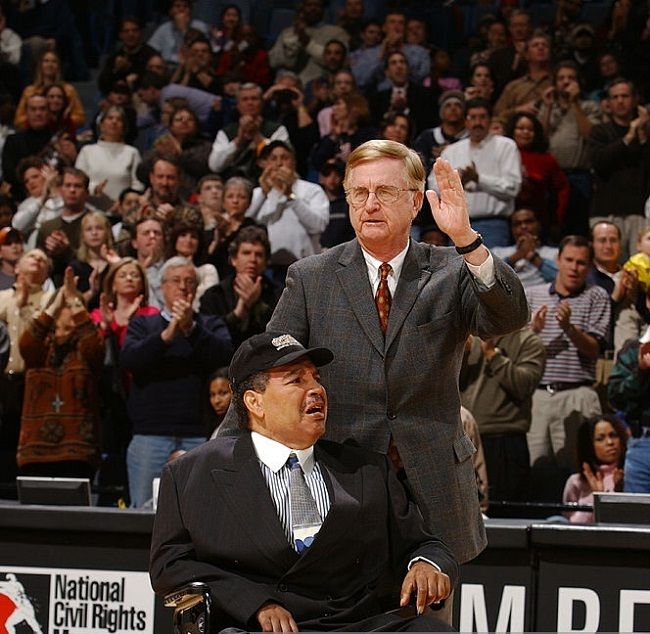 In the year 1998, he ran for the office of Shelby County Registrar. But he lost to the incumbent by only 127 votes. He didn’t have any government experience before this. He was briefly in the running for coaching positions at Tennessee State, Georgia State, and South Alabama.

Larry Finch was a married man and his wife is Vicki Finch. The lovers had three children together. They are daughter Shanae Finch, and sons James Finch and He. There isn’t much information regarding Finch’s marriage and family.

In the year 2002, Larry Finch suffered a debilitating stroke at the age of 50 years. People close to him created the Friends of the Foundation. They did so to help offset his medical expenses. Then in December 2006, the Foundation released a tribute CD called “Eye of the Tiger”. The CD featured performers from Memphis’ diverse musical community like Al Green, The Bar-Kays, Gary Johns, John Kilzer, and Al Kapone.

Further, in October 2010, they hospitalized him for the treatment of pneumonia. Later on the 2nd of April 2011, he passed away after battling a long illness. He was only 60 years old at the time of his demise. Moreover, his place of demise is

Larry Finch is a professional basketball player. He had a tall build with a height of 6 ft 2 in or 1.88 m. Similarly, his listed weight is 185 lb or 84 kgs. Moreover, he had dark brown hair and eyes of the same color.