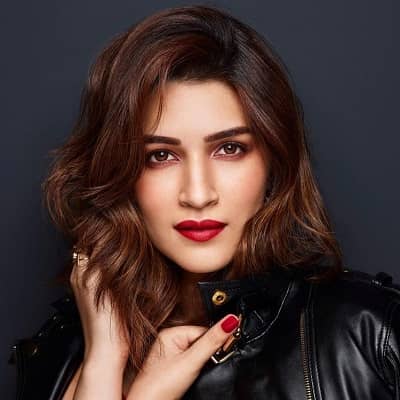 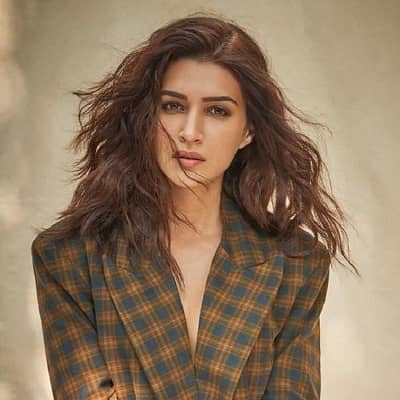 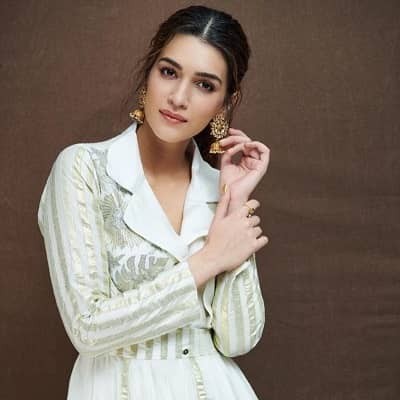 Kriti Sanon is a prominent Indian actress and model. Kriti Sanon gained immense fame for her roles in films including ‘Heropanti’, ‘Bareilly Ki Barfi’, ‘Luka Chuppi’, ‘Dilwale’, ‘Housefull 4’, and ‘Raabta’ among numerous others.

Kriti Sanon was born on 27 July 1990 and her current age is 32 years old. She hails from New Delhi, India, and her zodiac sign is Leo. Talking about her family, her parents are mother Geeta Sanon and father Rahul Sanon. Her father is a chartered accountant whereas her mother is a physics professor at the University of Delhi.

Talking more about her family, she comes from a Punjabi family background. Moreover, she also has a younger sister namely Nupur Sanon. Talking about her educational journey, she attended Delhi Public School located in RK Puram. Later on, she graduated from Jaypee Institute of Information Technology, Noida. She gained a Bachelor of Technology degree in Electronics and Telecommunication Engineering. 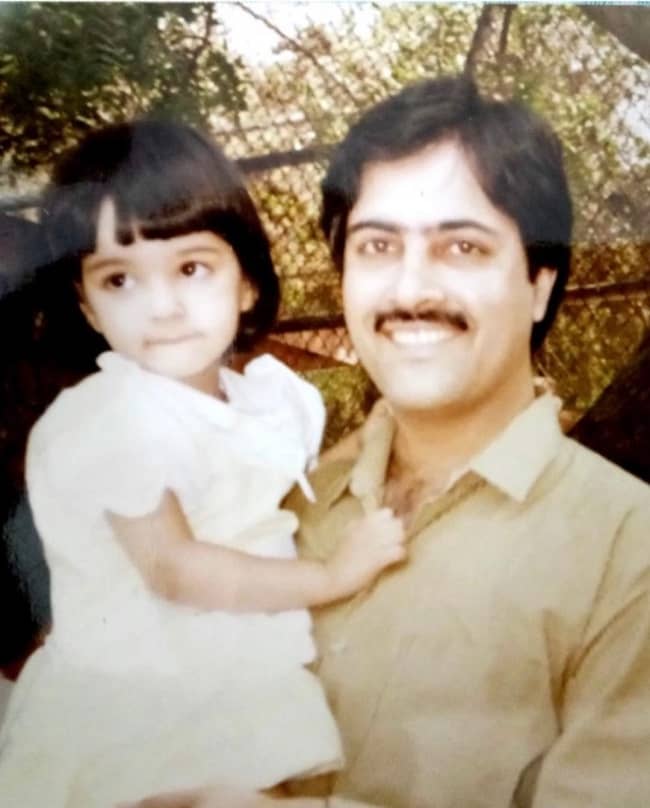 Caption: Kriti Sanon and her father in a childhood photograph. Source: Instagram

Professionally, Kriti Sanon is a popular actress. The famous actress appears predominantly in Hindi films. She briefly worked as a model after her college graduation. Initially, the actress made her acting debut in Telugu cinema. It was with the psychological thriller 1: Nenokkadine released in the year 2014.

In her debut film, she played the role of Sameera. This character is a journalist and also the love interest of character Gautham, played by actor Mahesh Babu. Additionally, Gautham is a successful musician with a shady personality.

Following this, actress Sanon won the Filmfare Award for Best Female Debut. This award was for her performance in Heropanti. It is a 2014 action-comedy movie by Sabbir Khan also featuring Tiger Shroff. This movie marked her first project in Hindi cinema. 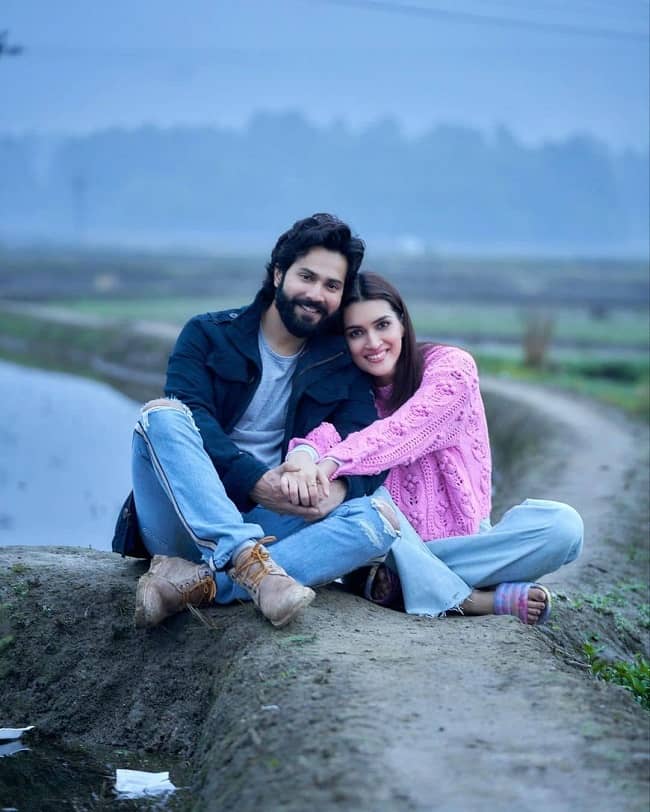 Caption: Kriti Sanon posing for a photo with her co-star of the film ‘Bhediya’, Varun Dhawan. Source: Instagram

Actress her highest-grossing release was with Dilwale and Housefull 4. The former is a 2015 comical action romance featuring some well-established actors like Varun Dhawan, Shah Rukh Khan, and Kajol. The latter is a comedy released in 2019. In the year 2017, she appeared in Raabta alongside the late actor Sushant Singh Rajput. This film is Dinesh Vijan’s directorial debut. Moreover, she and Sushant portrayed the roles of star-crossed lovers who are reincarnated.

The actress has completed filming for the film Mimi set to release in 2021. She has also completed working on the film Hum Do Hamare Do working opposite Rajkummar Rao. As of January 2021, she has also finished shooting for Bachchan Pandey. In February 2021, it was revealed that she would be reuniting with her Heropanti co-star Tiger Shroff in Ganapath.

Furthermore, the actress would also be appearing in Bhediya alongside Dhawan. In March 2021, she starred as Sita in the mythological film Adipurush which also co-starred Prabhas and Saif Ali Khan. 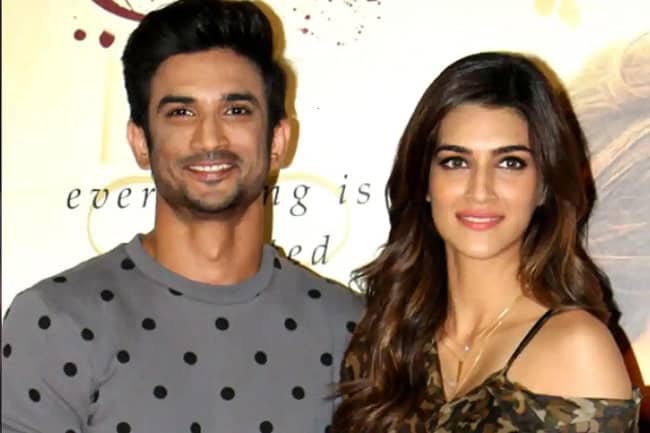 Caption: Kriti Sanon posing for a photo with her co-star, Sushant Rajput, during the trailer launch of the film ‘Raabta’. Source: India

Additionally, in September 2016, she launched her own clothing line labeled ‘Ms. Taken’. The actress also performed at the opening ceremony of the 2017 Indian Premier League.

The Indian actress also endorses several brands and products. Some brands that she endorses include Titan Watches’ Raga Collection, Parachute, and UrbanClap among numerous others. In July 2014, the Bollywood actress also launched Tissot’s Quickster Football watch in multiple cities in India.

The talented actress Kriti has been successful to won several awards as well as got nominations as well. In 2015, she became successful to won Best Female Debut in Filmfare Awards. Likewise, she also won for Style Icon in International Indian Film Academy Awards. Last year, in 2020, she got nominations for Zee Cine Awards Best Actor – Female for the movie Luka Chuppi.

Moreover, she also appeared in Forbes India’s Celebrity 100 list in the year 2019. The actress ranked #38 and her annual income was estimated at ₹80.9 million (US$1.1 million). Further, she has a net worth estimation of around $4.4 million US dollars.

Kriti Sanon is most probably single at present. The Bollywood actress has not shared any information to reveal her relationship status. Her last rumored boyfriend was the late Bollywood actor and her co-star of Raabta, Sushant Singh Rajput.

Moreover, her sister revealed in a 2019 interview that she has dated just two people up until that point in her life. The longest of her relationship lasted 2.5 years. Further, she has also admitted that she is a hopeless romantic and hates the fact that loyalty is not found easily these days.

Kriti Sanon stands tall at an approximate height of 1.73 meters or 5 feet 9 inches and her weight is around 123 lbs or 56 kgs. Likewise, the Bollywood actress’s chest-waist-hip measurements are 33-27-34 inches respectively. Moreover, she has dark brown eyes and hair of the same color.

Talking about her social media presence, she joined Twitter in April 2010 and so far has over 6.3 million followers in her @kritisanon account. Likewise, on Instagram, she is available under the username @kritisanon. This account boasts exactly 2,355 posts shares and has garnered over 39.3 million followers as of April 2021.