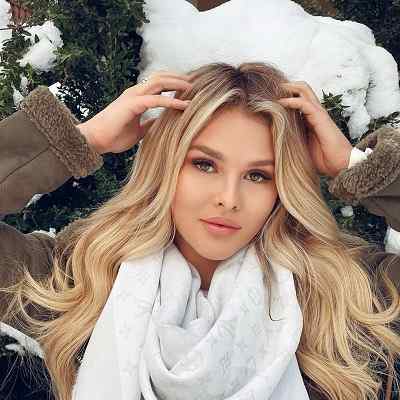 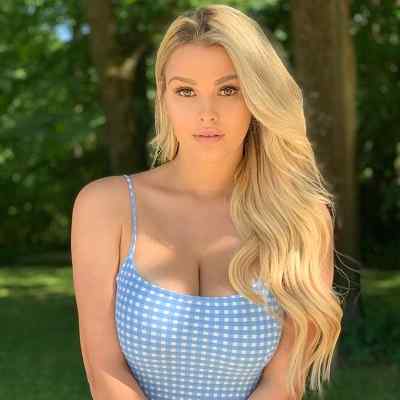 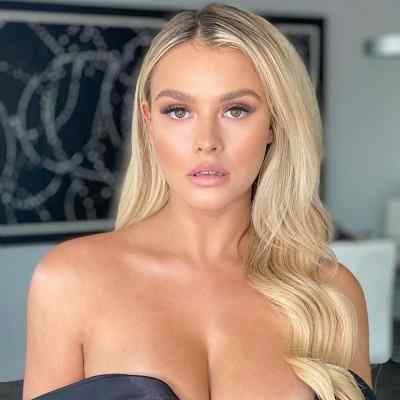 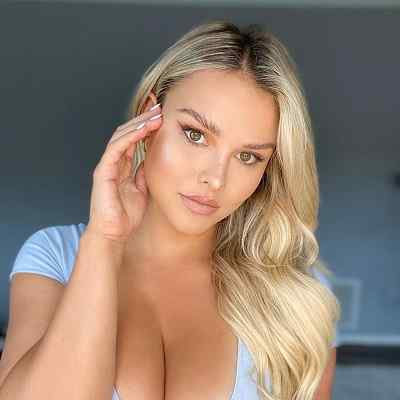 Kinsey Wolanski is an American model who was featured in Maxim, Sports Illustrated, and FHM. Kinsey Wolanski covered The BLVD Magazine and has two national commercials as well. Likewise, she gained a great deal of publicity after a soccer game stunt where she streaked across the field during the 2019 Champions League final game.

Kinsey Wolanski was born in the United States of America on August 30, 1996. She is 25 years old and her birth sign is Virgo. She holds American nationality.

The name and information regarding her parents are not available at the moment. She has a younger brother but his name is not available until now. However, she posted a photo of her brother on Twitter in January 2012. But it seems as if she wants to keep her family and personal life private.

Regarding her educational background and qualification, the name of the educational institutions she attended is not available. But considering her age, she must have graduated from both high school and university unless she is a dropout or decided to quit further studies.

Kinsey Wolanski started modeling after getting asked to model during her visit to Los Angeles. And, she was placed 8th in the west during Miss Jetset 2017. In the year 2020, she became a member of the social media group clubhouse alongside Abby Rao and Daisy Keech. Likewise, she also appeared in FHM, Maxim, and Sports Illustrated magazine.

She is active on other social platforms such as TikTok and Facebook. Her TikTok account is under the name “@kinseywolanski”. She shares a lot of fun, entertaining, and interesting videos on her TikTok page. Likewise, she has shared 179 videos and has garnered altogether 7.1M likes until now. She has a huge fanbase on TikTok and a lot of fans and followers. Also, her TikTok videos get thousands and millions of views and likes.

Furthermore, she also owns a Youtube channel under the name “Kinsey”. She launched the channel on July 3, 2017, and has been able to muster 6,029,217 views until now. She mostly shares prank videos on her Youtube channel. Likewise, she has also posted a vlog and a QnA video on her channel. Moreover, the first-ever video she posted on her channel is GIRL MOANING IN THE GYM PRANK!. This video was uploaded on August 2, 2019, and has accumulated 515K views to date.

The most popular video on her Youtube channel is Weird Workouts In the Gym Prank!!!. This video was posted on September 26, 2019, and has accumulated 2M views to date. Likewise, some of the other popular videos on her channel are Crazy Thailand Trip With Dan Bilzerian and His Girls!!!, Farting On Strangers At The Grocery Store Prank!!!, and Giving Strangers A Lap Dance Prank!!!!!. All of these videos have garnered more than 290K views until now.

She is active on Twitter and Facebook as well. She has garnered thousands of followers on these social platforms as well.

Kinsey Wolanski ran onto the field during the 2019 Champions League final game between Liverpool and Tottenham at Atletico Madrid’s Wanda Metropolitano stadium in a high cut full piece swimming costume in June 2019. Eventually, she was restrained by security, and held by police for almost five hours. She was made to wear a hospital gown while waiting in a cell. Likewise, printed across Wolanski’s chest were the words ‘Vitaly Uncensored’, the name of her ex-boyfriend Vitaly Zdorovetskiy’s X-rated site.

However, after the publicity stunt, she claimed that she gave out 1,000 signed posters of herself. She also said: “You guys I can’t even fathom what is going on right now, I feel amazing and so thankful, I really could cry. I really did this just because I really want to push myself out of my comfort zone, I love that feeling – that adrenaline feeling and doing crazy things”.

She also added: “I love to do crazy things all the time, but I never thought it would get to this scale and all of your support and messages and everything is so amazing. And I really want to do something special for you guys, anything that I can, so I’m going to offer 1,000 free signed posters. I love you so much and I want to thank you guys in any way I can”. Moreover, she even celebrated with friends the following morning after the final with “ginger shots” at a cafe in Madrid. 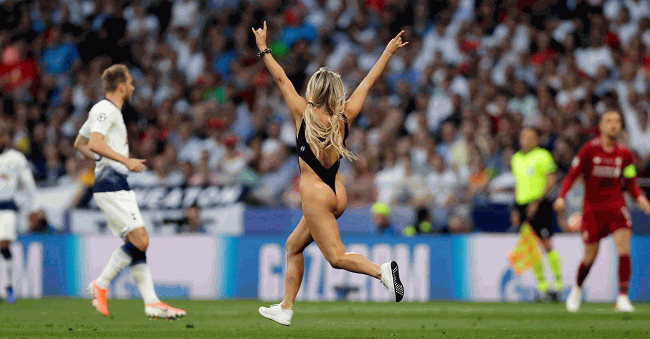 Caption: Kinsey Wolanski running across the football field while the game was going on (Source: Google)

Kinsey Wolanski is possibly single at the moment. She seems to be more focused on her career rather than being in any kind of romantic relationship. Or maybe she wants to keep her personal and love life private, away from the limelight and the public.

Talking about her past relationships, she was in a romantic relationship with a guy name Vitaly Zdorovetskiy. He is a Youtuber and also owns an uncensored site. However, they dated for 2 years and got separated. 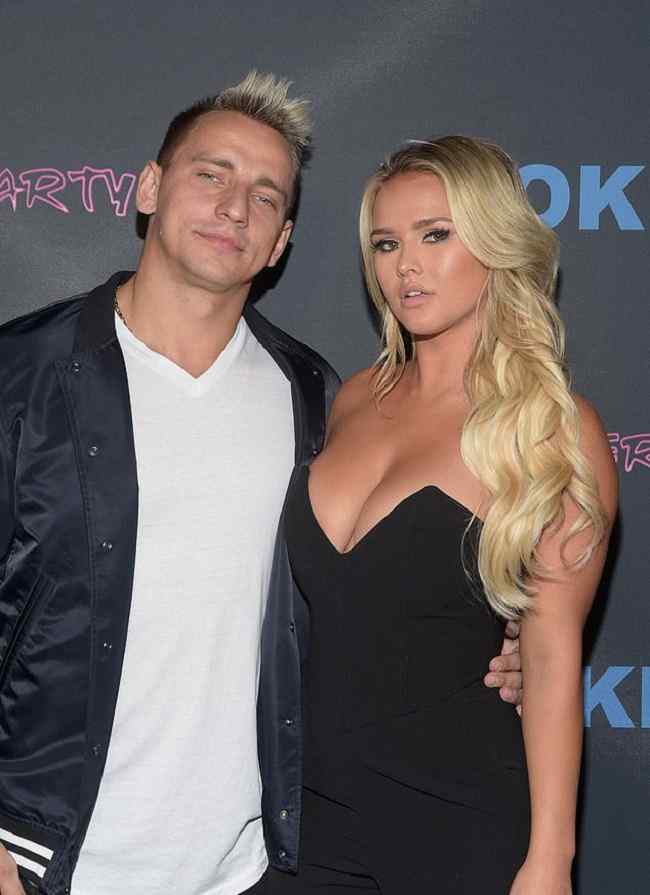 Kinsey has a height of 5 feet 5 inches and her weight is 55 Kg. Her other body measurements such as chest size, waist size, and hip size are 34-26-36 inches respectively. Likewise, she has got blonde hair and hazel eyes. She is really beautiful and very attractive as well. 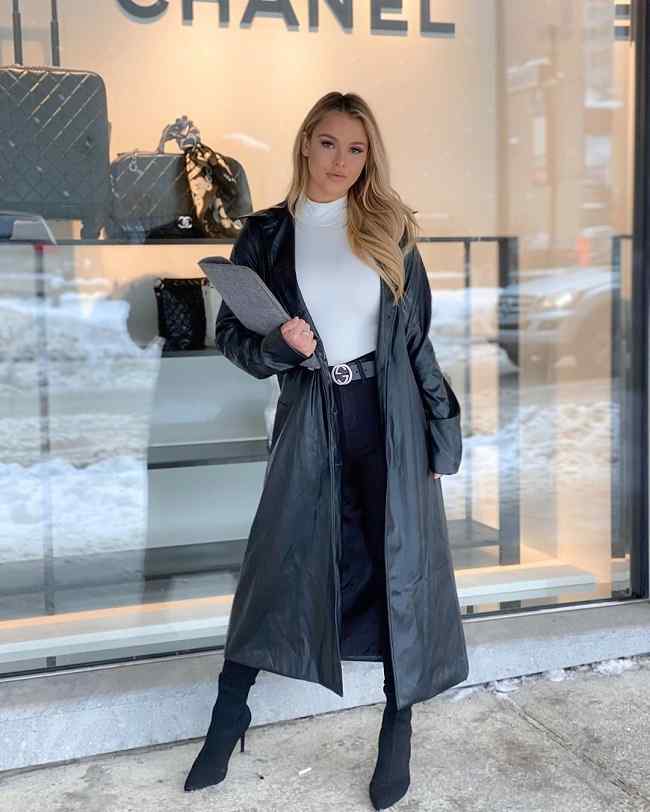 Focusing on her earnings and income, she has a net worth of $400K. Her main income sources are her modeling career and Instagram. She also earns through Youtube.