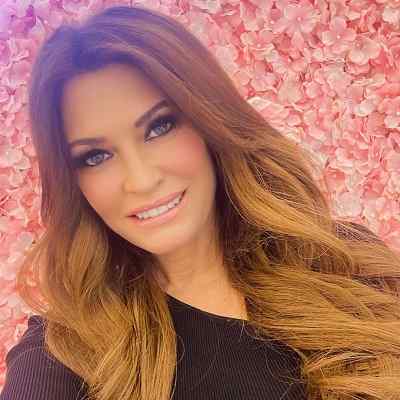 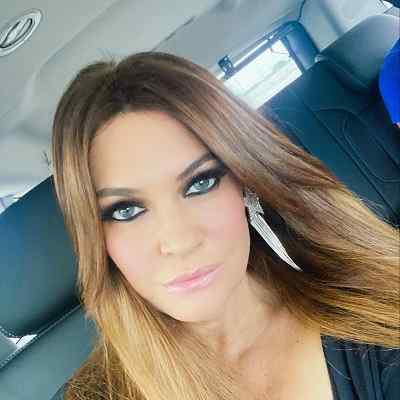 Kimberly Guilfoyle was born on March 9, 1969, in San Francisco, California, USA. She is 52 years old and is under the zodiac sign, Pisces. She holds American nationality. Her birth name is Kimberly Ann Guilfoyle.

Kimberly’s father’s name is Anthony Guilfoyle and her mother’s name is Mercedes Guilfoyle. Her father is Irish and her mother a Puerto Rican. She also has a brother and his name is Anthony Guilfoyle. Likewise, Kimberly was raised Catholic. She and her brother grew up in the Mission District of San Francisco and in Westlake, Daly City. Moreover, their mother, Mercedes, taught special education. She passed away from leukemia when Kimberly Guilfoyle was 11 years old.

Her father, Anthony was born in Ennis, County Clare, Ireland. He immigrated to the United States in the year 1957 at the age of 20. Then, in the year 1958, while he was still an Irish citizen, he drafted and served for four years in the U.S. Army. Likewise, after being discharged from the army, her father took up work in the construction trades. Later on, he became a real estate investor and, until his death in the year 2008, a close advisor to Mayor Newsom.

Regarding Kimberly Guilfoyle’s educational background and qualification, she graduated from San Francisco’s Mercy High School. Then she enrolled in the University of California, Davis. She received her Juris Doctor from the University of San Francisco School of Law in the year 1994. And, while in law school, she interned at the San Francisco district attorney’s office and modeled for Macy’s and a bridal magazine. Furthermore, she later studied at Trinity College Dublin in Ireland. And there, she published research in international children’s rights and European Economic Community law.

Kimberly Guilfoyle taught in a public school district after her law school. She briefly worked as a prosecutor in San Francisco. But she lost her job in the year 1996 when Terence Hallinan became district attorney and fired 14 of the city’s prosecutors. Guilfoyle then spent four years in Los Angeles as a deputy district attorney. She worked on adult and juvenile cases, including narcotics, domestic violence, kidnapping, robbery, arson, sexual assault, and homicide cases. Kimberly even received several awards at the Los Angeles District Attorney’s Office, including Prosecutor of the Month.

Then, in the year 2000, Hallinan in the San Francisco District Attorney’s Office hired her. She served as an assistant district attorney from the year 2000 to 2004. And, during this time Kimberly obtained a conviction while co-prosecuting with James Hammer in the 2002 case People v. Noel and Knoller, a second-degree murder trial involving a dog mauling that received international attention.

Moreover, Kimberly Guilfoyle appeared in the 2004 film “Happily Even After”. She played a public defender opposite Ed Asner and Marina Black, Shirley Temple’s niece. This film was screened at the Tribeca Film Festival. Then, in January 2004, she moved to New York to host the program Both Sides on Court TV as well as to work as a legal analyst on Anderson Cooper 360°. Kimberly later Fox News in February 2006 as host of the weekend show “The Lineup”. Unfortunately, this show was eventually canceled. However, she remained a regular contributor to the network. And she later became co-host of “The Five” in the year 2011. Kimberly then remained a host on the show until the year 2018.

Likewise, in the year 2014, she started hosting and then co-hosting Outnumbered for nearly fifty episodes, plus a few more appearances up until June 2018. Moreover, Guilfoyle appeared weekly on the recurring segment “Is It Legal?” on The O’Reilly Factor until that show’s cancellation in the year 2017 and as a weekly Thursday guest on Brian Kilmeade’s Kilmeade and Friends radio show. She also guest-hosted Hannity, On the Record, Justice with Judge Jeanine, and Fox and Friends.

Then, in mid-2017, Kimberly Guilfoyle signed a long-term contract extension with Fox. Then, a year later, in July 2018, she abruptly left Fox News and started working for a pro-Donald Trump super PAC. Likewise, HuffPost reported that, at the time of her departure, the network had been in the midst of a year-long sexual harassment investigation into Guilfoyle. And, Network officials had given her an ultimatum: resign by the end of July or be fired. Later on, New Yorker subsequently corroborated reports that Guilfoyle had been forced to resign rather than leaving by choice.

Furthermore, after Kimberly Guilfoyle’s departure, Fox News agreed to an out-of-court settlement with an assistant who had accused Guilfoyle of sexual harassment. But they didn’t disclose the terms, but The New Yorker reported that the settlement was $4 million. Likewise, the assistant alleged that Guilfoyle frequently displayed herself naked, showed photographs of the genitalia of men she had sex with, and required her to sleep over at Guilfoyle’s apartment. And, the New Yorker independently verified several of the assistant’s allegations. 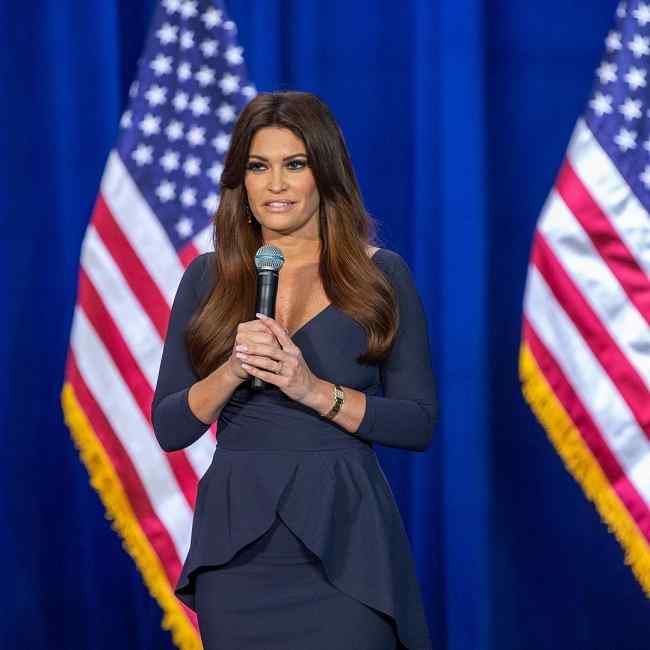 Kimberly Guilfoyle released a semi-autobiographical and advice book, titled “Making the Case: How to Be Your Own Best Advocate” in the year 2015. The book was about her experiences growing up, working as a prosecutor, and encouraging people always to advocate for themselves

Kimberly Guilfoyle was being considered to serve as press secretary for President Donald Trump in December 2016. And, Sean Spicer was considered the front-runner for the position and was ultimately selected. Then, on the May 12, 2017, edition of The Five, co-host Bob Beckel hinted that Kimberly turned the job down. However, in an interview with Bay Area News Group, she confirmed she was in contact with the White House about the position following Spicer’s resignation. But, on May 19, she said she was under contract with Fox, indicating she turned the White House down. And, one month later, Guilfoyle extended her contract with Fox.[33]

Likewise, in the year 2018, The Washington Post described Kimberly as a “conservative cheerleader for President Trump”. And, in the year 2020, she was reported to be the chair of the finance committee of the Trump Victory Committee. Moreover, as of early 2020, the Trump campaign was paying Kimberly $15K per month through the campaign manager’s private company, Parscale Strategy.

She has also been a surrogate on the stump and taken on broad advisory roles. In the Trump 2020 campaign, she managed a fund-raising division and this division paid socialite Somers Farkas to raise money. And, the fundraising division managed by Guilfoyle was in internal turmoil amid departures of experienced staff and accusations of irresponsible spending. Unfortunately, in July 2020, she tested positive with COVID-19, however, her boyfriend, Donald Trump Jr., tested negative.

At the Republican National Convention, Kimberly Guilfoyle gave a speech. And, some observers described it as unnecessarily loud or unhinged in August 2020. Even though others in media described it as passionate. People also criticized her for describing herself as a first-generation American when her mother was from Puerto Rico and thus an American citizen.

Furthermore, in January 2021, Kimberly Guilfoyle joined President Trump, Donald Jr., Rudy Giuliani, Eric Trump, and others on the Ellipse in Washington, D.C. to address the “Save America March”. She even appeared in a video screened at the march by Donald Jr. 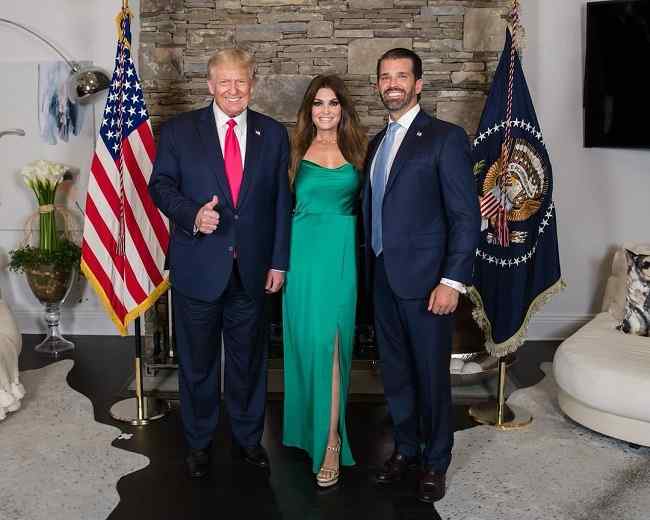 Caption: Kimberly Guilfoyle along with Donald Trump and her boyfriend (Source: Instagram)

Kimberly Guilfoyle is the recipient of several awards. She received awards including Prosecutor of the Month from the Los Angeles District Attorney’s Office and an award for being “Outstanding Woman of the Year” from the City of San Francisco. Likewise, in the year 2004, she got a “Special Civil Rights Award” from New York City. And, then the following year, she became “USO Entertainer of the Year”. Moreover, Kimberly is also an active board member of The Gastro Esophageal Cancer Foundation and serves on the advisory panel for the American Bar Association.

Kimberly Guilfoyle married Gavin Newsom who was then a San Francisco city supervisor in the year 2001. Gavin became Mayor of San Francisco in the year 2003. And, while married to Newsom, she went by the name Kimberly Guilfoyle Newsom. The couple also appeared in the September 2004 issue of Harper’s Bazaar ; the spread had them posed at the Getty Villa and referred to in the title as the “New Kennedys”. However, in January 2005, citing the strain of a bicoastal marriage, Kimberly Guilfoyle and Gavin Newsom jointly filed for divorce. And they officially divorced on February 28, 2006.

Then, on May 27, 2006, in Barbados, Kimberly Guilfoyle married furniture heir Eric Villency. She gave birth to their son, Ronan Anthony, on October 4, 2006. But, in June 2009, the couple announced that they separated. And, they finalized their divorce later that year.

Furthermore, in June 2018, Vanessa Trump, who had filed for divorce three months earlier, confirmed that Kimberly Guilfoyle and her husband, Donald Trump Jr. were dating. And, in mid-2019, Guilfoyle and Trump jointly purchased a $4.4 million home in The Hamptons. 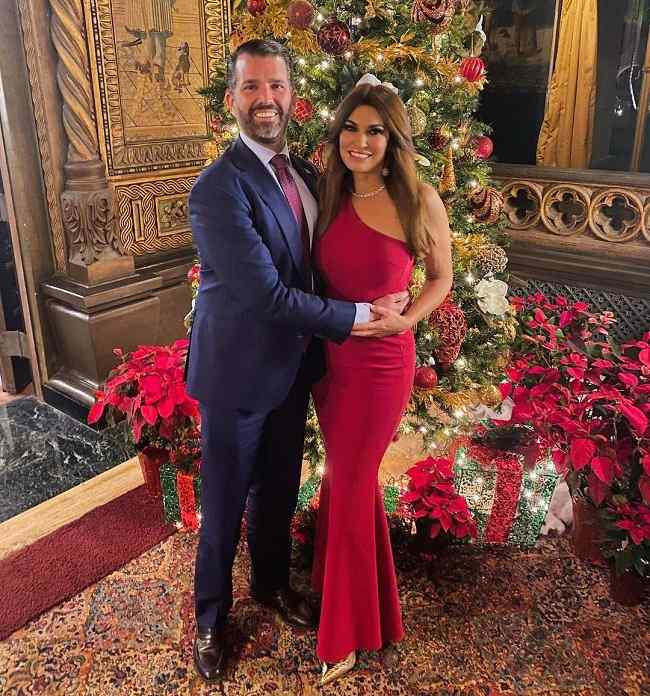 Kimberly Guilfoyle has a height of 5 feet 2 inches and her weight is 55 Kg. And her other body measurements such as her chest size, waist size, and hip size, are 36-25-35 inches respectively. Moreover, Kimberly has brown hair and grey eyes.

Kimberly Guilfoyle is pretty active on all of her social accounts. She has garnered 783K followers on Instagram and 1.7 million followers on Twitter. Likewise, she is also active on Facebook and has 746K followers on it.

Focusing on her earnings and income, according to celebritynetworth, Kimberly has an estimated net worth of $25 million and her main income source is being an attorney and a cable news personality.