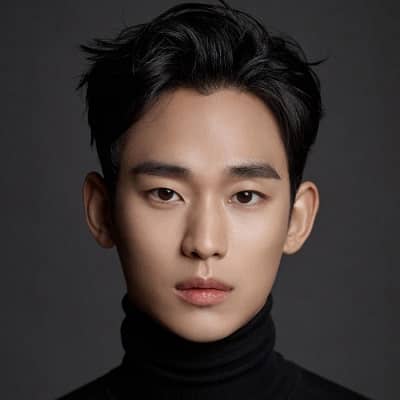 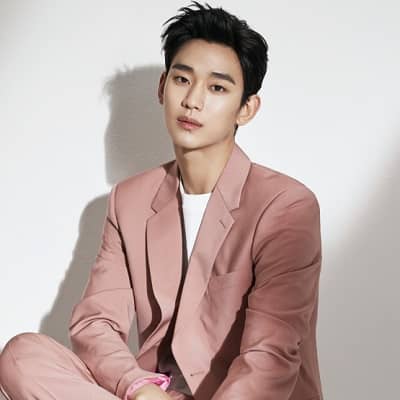 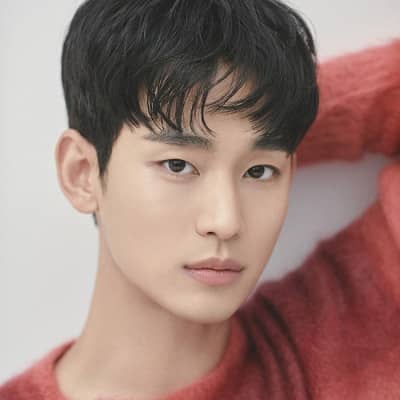 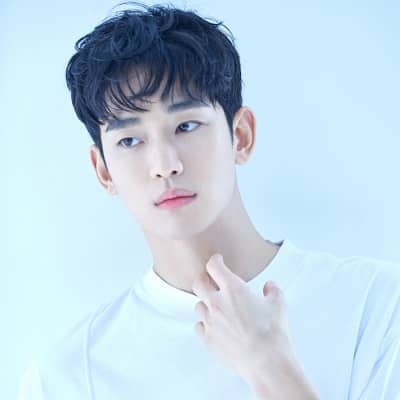 Kim Soo Hyun is a top Hallyu star from South Korea. Kim Soo Hyun is an internationally recognized actor, model, and endorser. He has acted in famous TV dramas and films like “Secretly, Greatly”, “Real”, “Dream High”, It’s Okay to Not Be Okay”, and “My Love from the Star” among others.

Kim Soo Hyun was born on February 16, 1988, and he is currently 34 years old. Soo Hyun’s hometown is Seoul, South Korea, and his zodiac sign is Aquarius. His name is written in Korean as 김수현 and in Hanja as 金秀賢.  Moreover, his name can also be spelled as Kim Su Hyeon or Kim Suhyŏn when translated from Korean to English.

Talking about his family, Soo Hyun’s father is Kim Chung-hoon. His father was the lead singer of the band Seven Dolphins. It is a popular band from the ’80s. Soo Hyun’s mother’s name is not revealed. However, she was the one who encouraged Kim to take acting classes during his school years.

His mother encouraged him so that Soo Hyun could overcome his shy and introverted personality at such a young age. Regarding his siblings, Kim Soo Hyun has a paternal half-sister named Kim Ju Na. Ju Na is also in the entertainment industry as a singer. This news regarding Soo Hyun’s sibling was revealed in July 2015.

Talking about his educational journey, Soo Hyun had completed elementary, middle, and high school by the year 2006. A year later, Soo Hyun auditioned for TV roles and debuted as an actor. Later on, Kim attended Chung-Ang University majoring in Film and Theater from the year 2009. 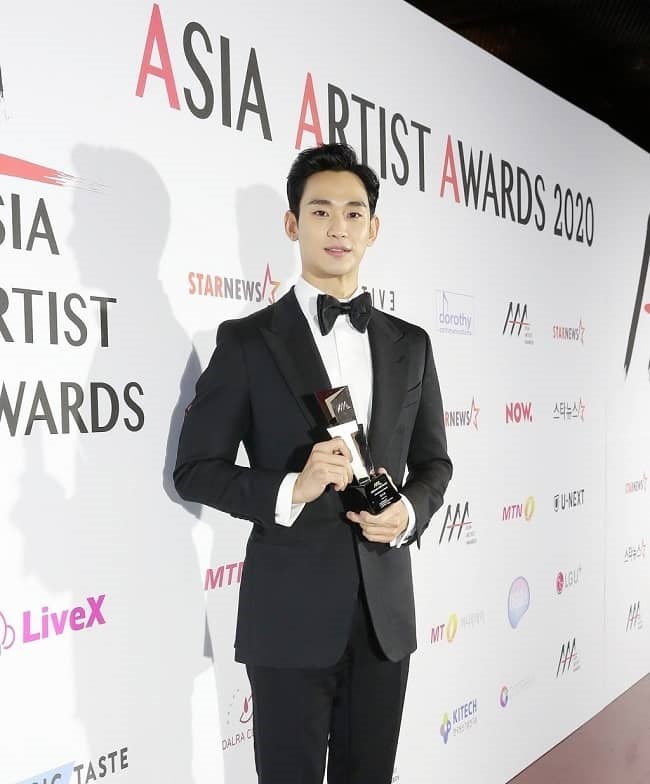 Professionally, Kim Soo Hyun is a top Hallyu star. The Hallyu star is most recognized for his TV roles in Dream High, Moon Embracing the Sun, My Love from the Star, The Producers, and It’s Okay to Not Be Okay among others. Likewise, people also recognized this famous actor for his roles in films including The Thieves, Secretly, Greatly, and Real.

Forbes Asia edition also listed Kim Soo Hyun in the list of 30 under 30 in the year 2016. The success of his TV drama and film projects internationally established Soo Hyun as a top Hallyu star. Subsequently, Kim Soo Hyung became one of the highest-paid actors in his native country.

Kim Soo Hyun is a bowling enthusiast. Hence, in October 2016, the actor applied to become a professional bowler. Kim ranked #10 out of the 114 participants on his first try-out tournament. However, the actor failed to make the cut on the second. He fell short of the 200 points needed to qualify. His point was 192.3. Likewise, Kim Soo Hyun also showcased his bowling skills on his guest appearance on Infinite Challenge.

He took acting classes from a young age and Kim then seriously aspired to pursue acting as a career when he was in between middle and high school. Initially, Soo Hyun worked on theatrical productions before moving on to TV and films.

Some major acting projects before the actor officially debuted include Soo Hyun’s role as Puck in Shakespeare’s play A Midsummer Night’s Dream, as Kenickie in Grease, and Hamlet in Hamlet. The actor then made his official acting debut in 2007 with the sitcom Kimchi Cheese Smile.

Then in 2008, Soo Hyun played the lead role in Jungle Fish. The same year, actor Kim starred as a host in Delicious Quiz/The Taste of Life and also acted in the film Cherry Blossom. Likewise, in 2009, Soo Hyun worked on the short film Worst Friends and a drama special Father’s House. In the latter, Kim worked with the veteran actor, Choi Min-soo. The same year, the actor was the host of the Boys & Girls Music Countdown. His co-host for the show was Han Seung Yeon.

2010 was full of Kim Soo Hyun acting the younger version of the male lead characters in a few TV dramas including Will It Snow for Christmas? and Giant. For his work in the latter, actor Kim bagged the “Best New Actor” award at the SBS Drama Awards. 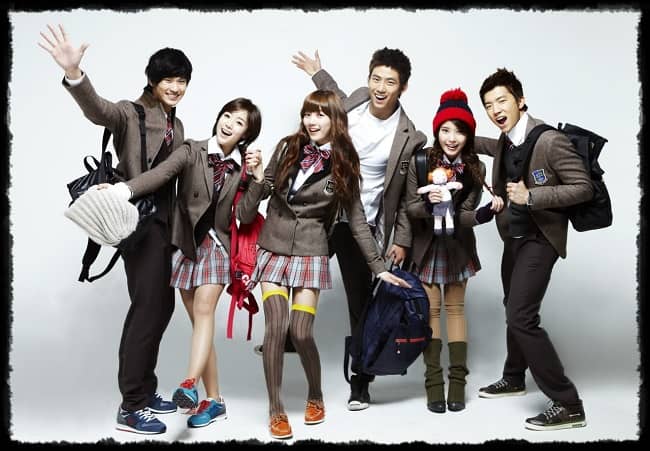 Caption: Kim Soo Hyun posing for a photo with the casts of ‘Dream High’. Source: My Rara Pop

Kim Soo Hyun gained wider fame with Dream High. Soo Hyun was the only young actor whereas other casts of this drama were idols. Due to this, the actor studied song and dance for three months at JYP Entertainment. He did this so that the actor could pull off the required scenes in Dream High.

The actor also recorded two songs for the aforementioned drama. The tracks were Dreaming and Dream High which he recorded with the rest of the Dream High casts. Kim Soo Hyun also recorded Only You and Another Way his another drama project Moon Embracing the Sun.

Furthermore, through the actor’s popularity skyrocketing from the drama Moon Embracing the Sun, Soo Hyun received numerous offers for product endorsements. The actor also set a record for simultaneously being the face of 17 products. Kim then worked with the fellow Hallyu star Jun Ji Hyun in My Love from the Star. The actor recorded two singles for this project – In Front of Your House and Promise. Following this project, Kim Soo Hyun became one of the most in-demand endorsers. The actor endorsed 35 products in a short time frame.

Furthermore, the Korea Broadcast Advertising Corporation revealed that Kim Soo Hyun was one of South Korea’s favorite leading faces on TV. Similarly, Soo Hyun’s wax figure was displayed at Madame Tussauds, Hong Kong, and Musée Grévin, Seoul in the year 2015. The same year in March, Soo Hyun received the “Model Taxpayer” award. This award was given by the local tax office for faithfully paying taxes every.

After 5 long years, Kim returned to the small screen with It’s Okay to Not Be Okay working alongside actress Seo Yea Ji. For his portrayal of Moon Gang Tae, Kim received the Daesang (or “Grand Prize”) award at the 5th Asia Artist Awards. 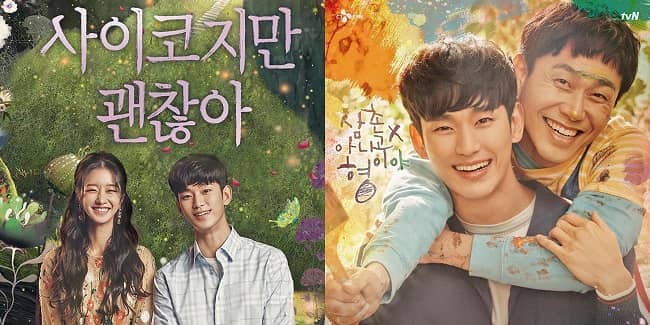 Caption: Kim Soo Hyun appearing on the poster of the TV drama – It’s Okay To Not Be Okay. Source: Instagram

Kim Soo Hyun enlisted for his mandatory military service on October 23, 2017. The actor previously underwent heart-related surgery. Due to this, Soo Hyun was deemed unfit for active-duty service. Therefore, the actor was supposed to work on public service duty.

However, Soo Hyun voluntarily re-examined his health condition and as a result, was declared fit for active-duty service. The actor joined a military camp in Paju, Gyeonggi Province. There, actor Kim completed his basic training.

Then in November 2017, Kim ranked #4 as an outstanding trainee during the completion of his basic training. The division commander rewarded the actor with a vacation. The actor also received a self-deployment to the 1st Reconnaissance Battalion for this remaining military duty.

Kim Soo Hyun completed his military service on July 1, 2019, and was subsequently discharged from the military the same day. Prior to his discharge, the actor received an early promotion as a Sergeant. He received this promotion in February 2019 for Soo Hyun’s exceptional conduct in the military. Kim Soo Hyun is single at present. There have been no official announcements regarding the famous actor’s relationships and affairs to date. The actor is most probably more focused on achieving greater goals in his career in the entertainment industry rather than involving in affairs and relationships.

Kim Soo Hyun stands tall at an approximate height of 180 cm or 5 feet 11 inches and his weight is around 65 kg or 143 lbs. Likewise, Kim Soo Hyun has dark brown eyes and hair of the same color.

Talking about his social media presence, Kim Soo Hyun is available on Instagram under the username @soohyun_k216. While writing this biography, Soo Hyun has earned over 10.4 million followers. Other than this, the actor doesn’t have an official account on other platforms.

Moving on, Soo Hyun has a net worth estimation of around $1.2 billion. In 2022, actor Kim’s salary per episode was estimated at $83,900, making him one of the highest-paid South Korean actors.