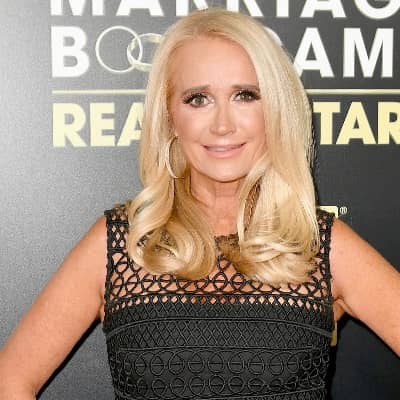 Kim Richards was born in Mineola, New York, on September 19, 1964. Kim Erica Richards is her birth name. She is of Welsh and Irish ancestry and was born in America. As of now, she is 57 years old. Her zodiac sign is Virgo, and she is a Christian.

Her nieces are socialites Nicky and Paris Hilton (daughters of her half-sister, Kathy). In terms of education, she attended Imperial High School in Imperial, California, and graduated in 1983. 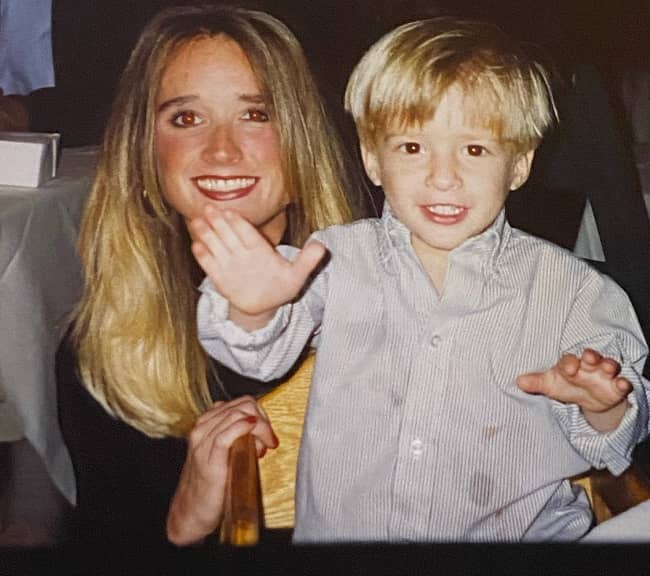 Caption: Kim Richards with her son on one of the old photo Source: Instagram

Kim Richards began her career when she was only a few months old when she appeared in a Firth Carpet commercial. She went on to play Prudence Everett in the TV series “Nanny and the Professor”. She also appeared in a number of Disney films, including “Escape to Witch Mountain,” “No Deposit, No Return,” and “Return from Witch Mountain”.

Similarly, she also appeared in Disney’s “Whiz Kid Capers” series (The Whiz Kid and the Mystery at Riverton and The Whiz Kid and the Carnival Caper), two television movies that aired as part of the anthology series “The Wonderful World of Disney” from 1974 to 1976.

She also co-starred in the 1977 thriller film “The Car” with her sister, Kyle. In the made-for-television film “Devil Dog: The Hound of Hell,” she reunited with “Witch Mountain” co-star Ike Eisenmann (1978). She went on to star in the 1976 film “Assault on Precinct 13” and the short-lived television series “Hello, Larry”. 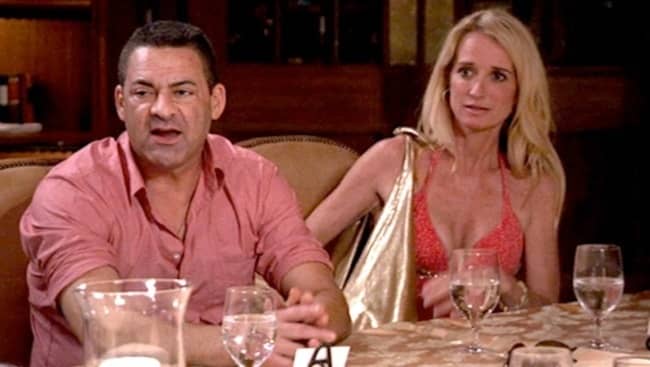 In addition, she appeared as Olga Nordstrom in episodes of Emergency!, Diff’rent Strokes, Alice, Fantasy Island, The Love Boat, CHiPs, Magnum, P.I., James at 16, The Dukes of Hazzard, The Rockford Files, and Little House on the Prairie.
She appeared in the films “Meatballs II” and “Tuff Turf.” She also co-produced “Escape” with her then-husband, G. Monty Brinson.

Not only that, but she also had a supporting role as Christina Ricci’s estranged mother in the 2006 film “Black Snake Moan”. Tina appeared as a cameo in “Race to Witch Mountain” (2009). In 2010, she debuted as a regular cast member on “The Real Housewives of Beverly Hills.”

Following her personal struggles, she was let go as a full-time cast member, but she returned as a guest star in the show’s sixth, seventh, ninth, and tenth seasons. She’s also appeared on Dr. Phil (2015), The Mother/Daughter Experiment: Celebrity Edition (2016), and Marriage Boot Camp: Reality Stars (2018).

She is a socialite, actress, and television personality. Her net worth is estimated to be $400 thousand as of 2021. While her exact salary has yet to be revealed, there is no doubt in the minds of her followers that she earns a substantial amount of money from her work. Her primary source of wealth is the entertainment industry.

Kim Richards had a husband. She is thought to be single at the moment. G. Monty Brinson, the owner of a supermarket chain who later became a poker player, was her handsome husband. Brooke Brinson, the couple’s daughter, was also born. Later, in 1988, the couple divorced.

Brinson, her husband, died of cancer on January 25, 2016, at the age of 58. Following that, he met Gregg Davis and married in 1988. Gregg Davis is the son of Marvin Davis, a petroleum magnate, and his wife, Barbara Davis. The couple has two children: Chad Davis, a son, and Whitney Davis, a daughter. Their marriage was short-lived, and they divorced in 1991.

Following her divorce from Gregg, she became engaged to commodities salesman John J. Collett, a key figure in a criminal scheme involving 8,000 elderly investors and nearly US$150 million in losses (equivalent to $285.01 million in 2020). He was murdered outside Brent’s Deli in Northridge on October 28, 1991.

He was on the phone with her at the time of the shooting. She even mentioned Collett’s death on an episode of The Real Housewives of Beverly Hills. From 2012 to 2018, she was in a relationship with businessman Wynn Katz after John’s death. The lovely couple even appeared together on WE TV’s Marriage Boot Camp in 2018 before splitting up.

Through her oldest daughter Brooke and her husband, Thayer Wiederhorn, he has two grandchildren: Hucksley Andrew Wiederhorn (born September 28, 2016) and Hunter Montgomery Wiederhorn (born April 18, 2019). On April 15, 2015, Kim Richards was arrested and charged with trespassing, public intoxication, resisting an officer, and battery on a police officer at the Beverly Hills Hotel.

She spent the night in the Los Angeles County Jail before being released the next morning on a US$20,000 bail. She was arrested again on August 2, 2015, for allegedly shoplifting at a San Fernando Valley Target department store, was booked into the Van Nuys jail, and was released on August 3 after posting US$5,000 bail.

She has a lovely face and a fit and trim body. She was rehabilitated in 2015 for her alcoholic behavior, family drama, disordered eating, and personal trauma. Furthermore, she has been to the rehab center several times, with her third attempt in 2012.