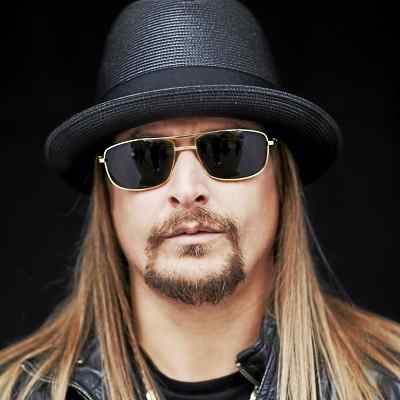 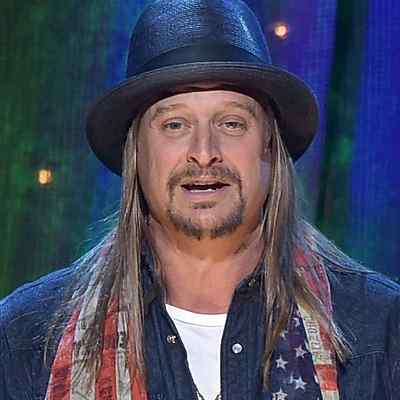 Kid Rock is 49 years old. He was born on January 17, 1971, in Romeo, Michigan. His birth name is Robert James Ritchie. His father’s name is William Ritchie, who is the owner of multiple car dealerships.

Likewise, his mother’s name is Susan Ritchie. His father owned a six-acre estate and a 5,628-square-foot home. He grew up over there regularly assisting his family pick apples and caring for their horses.

Likewise, he belongs to American nationality but has not mentioned his ethnic background. As a nine years old kid, he became interested in hip hop, began to breakdance and taught himself how to rap and DJ.

He is a self-taught musician who plays every instrument in his backing band.

Moving toward his educational background, he attended Romeo High School. While attending high school, he acted as a DJ at several parties. Since then he started adopting the name Kid Rock. 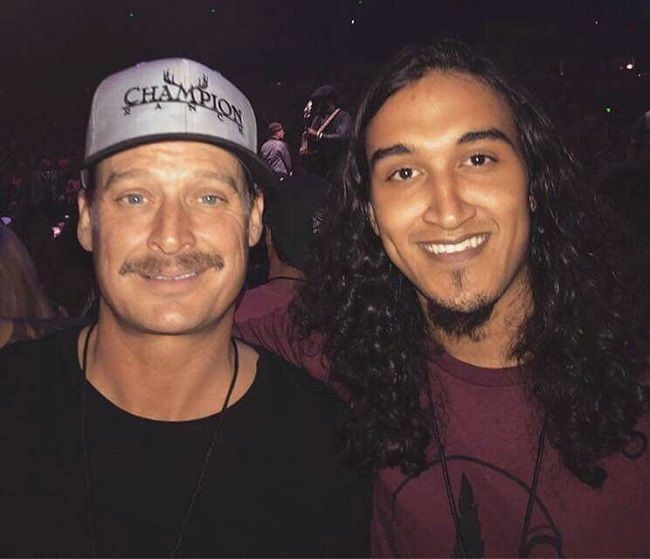 Caption: Kid Rock posing along with his son (Source: Pinterest)

Kid Rock has received several awards and also got nomination through his musical journey. Notwithstanding his 10 years as an artist, he was first nominated for the best new artist award at the Grammys in 2000. However, he failed to win that year.

Speaking on Kid Rock’s earning, he is an American singer-songwriter, rapper, disc jockey, musician, record producer, and actor who has earned a decent sum of money. Therefore, his total estimated net worth to date is around $100 million.

Likewise, he has gained this immense wealth mostly by his musical career. He had recorded 27 million album sales globally thereby, placing himself among the who’s who of the Hollywood music industry.

Talking about Kid Rock’s professional life, Jive Records signed a contract with him for an album after watching his remarkable performance as part of hip-hop group Boogie Down Productions.

In 1990, he made his debut through his first album ‘Grits Sandwiches for Breakfast.’ After that, he went to Brooklyn and began working with Continuum Records.

In 1993, he released his album ‘The Polyfuze Method.’ Though the album gained popularity for its notable musical style, it got criticized for one of its song ‘Balls In Your Mouth.’ In 1996, he issued his album titled ‘Early Mornin’ Stoned Pimp’ on his own label, Top Dog Records.

At the same time, he founded his own band, Twisted Brown Trucker. Then contracted to Atlantic Records, and in 1998 he released his fourth album, Devil Without a Cause. His fourth album was sold over 14 million copies in the wake of his breakthrough single, “Bawitdaba.”

He has also released the song ‘Only God Knows Why’ which song deserves the specific notice for its representation of road ballad. In the following year, he presented on ‘MTV Fashionably Loud’ in Miami.

Later on, with the help of MTV, he released his second single video ‘Bawitdaba’ of ‘Devil Without a Cause’ album.

Likewise, his single ‘Cowboy’ also gained huge success after its release and starred in the list of Top 40. Also, in 2000, he entered the Summer Sanitarium Tour together with bands like Powerman 5000, System of a Down and Metallica.

In 2006, his first live album ‘Live Trucker’ appeared. In the following year, alongside Bob Seger, he released ‘Rock ‘n’ Roll Never Forgets’. He also made his guest appearance in the film ‘Larry the Cable Guy: Health Inspector’.

In 2010, he issued ‘Born Free’, which is one of his successful albums. In the same year, he released his album ‘Care’ which was a protest on the political activities of America. He released his new album ‘Rebel Soul’ in 2012. In 2013, he performed on the “Best Night Ever” tour. 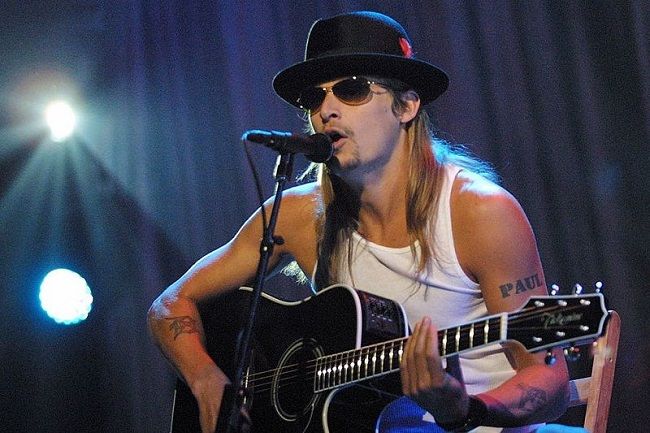 Regarding his major work on a musical journey, he released his album ‘The Polyfuze Method’ with Continuum Records in 1993. Some of his singles include ‘Back From The Dead’, ‘U Don’t Know Me’ and ‘Prodigal Son.’

His release shows the ability to use more advanced form of rap music.

Besides holding the controversial songs like ‘ Balls In Your Mouth’, he has released songs like ‘My Oedipus Complex.’ He composed in memory of his estranged father. Similarly, he issued his extended play ‘Fire It Up’ in 1993.

This includes some of his memorable songs like ‘I Am the Bulldog’. It recorded his first attempt to present country music.

In 2000, he released his compilation album ‘The History of Rock.’ Some of his previous songs from ‘The Polyfuze Method’ and ‘Early Mornin’ Stoned Pimp’. Also, in 2001, he published his album ‘Cocky’ with Atlantic Records.

In 2003, he released the album ‘Kid Rock’ which includes admirable songs like ‘Cold and Empty’ and ‘Rock n Roll Pain Train’. The song ‘I Am’ signifies his view regarding his own freedom as an American as well as an artist.

His album’s emotional song ‘Single Father’ attempts to expose his love towards his son. Furthermore, this song also expresses his sorrow for going through lots of problems for being a single father

It featured an old-school hip hop sound and the artist stated all proceeds from the single’s sales will go to fight COVID-19.

Reflecting on Kid Rock’s relationship status, he got married to Loretta Lynn in a surprise ceremony in August of 2020. In November 2017, he has engaged to longtime girlfriend Audrey Berry but not together right now.

He began a ten-year on and off relationship with a classmate named Kelley South Russell when he was in eighth grade. In summer 1993, his girlfriend Russell gave birth to his son named Robert James Ritchie Jr.

While being with her, the duo raised three children.  Later on, he found that one of the kids was not his and that led the couple splitting in late 1993. Then, he raised his son as a single father. 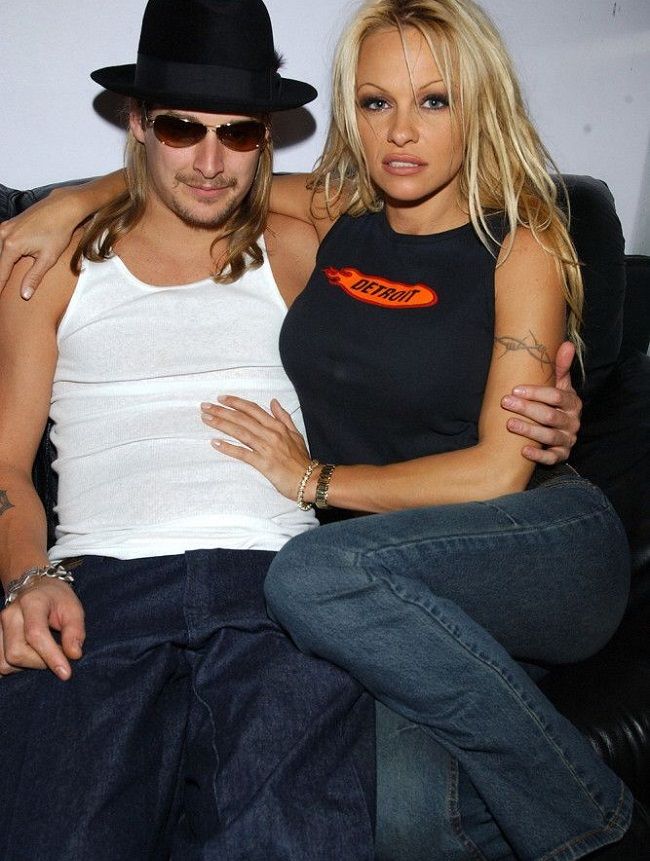 In July 2006, he married to Anderson. On November 10, 2006, Anderson was announced to be pregnant with Ritchie’s second child. But unfortunately, she had miscarried. On November 27, 2006, he filed for divorce from him in Los Angeles County Superior Court.

She cited their divorce due to incompatible differences. However, he later alleged that the divorce was due to openly criticizing his mother and sister in the presence of his son. In 2014, he became a grandfather when his son’s girlfriend was blessed with a daughter, Skye.

Through his journey, Kid Rock has engaged in several controversies and rumors regarding his personal as well as professional life. In both March 1991 and September 1997, he faced misbehavior charges arising from alcohol-related arrests in Michigan.

In 2006, California pornographic film company Red Light District attempted to share a 1999 sex tape in which he and Scott Stapp, a singer of the band Creed, are seen partying and enduring oral sex from groupies.

However, both Rock and Stapp registered with the California courts to appeal the pornographers to stop the tape’s distribution.

Likewise, he has also argued with animal rights activists over his love of shooting. He was a vocal supporter of Donald Trump in the 2017 presidential election. In late 2019, he made headlines for allegedly drunken bombast in which he bound out at Oprah Winfrey.

The 49-years-old famous personality Kid Rock has a good personality. He has a great height of 5 feet 11 inches and weighs around 81 kg. Likewise, he has a pair of green eyes and has brown hair color.

Therefore, he has not revealed his exact body statics, dress size as well as a shoe size.