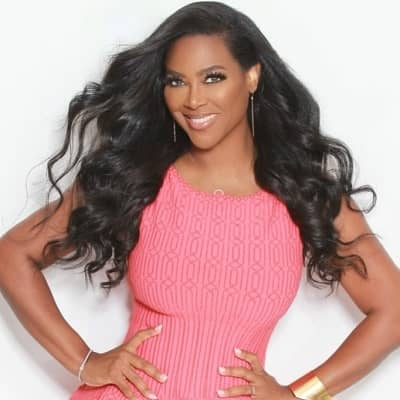 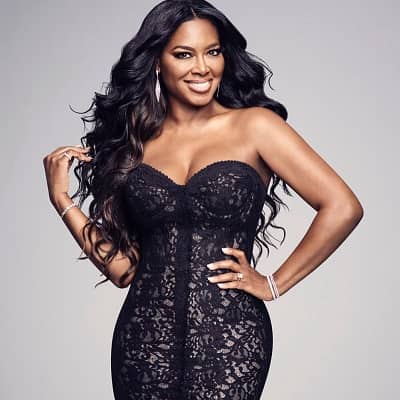 Kenya Moore is a talented and one of the most inspiring American personalities. Kenya Moore is an actress, model, producer, author, TV personality, entrepreneur, and also a social media personality. She became more popular after becoming the winner of the Miss USA contest in the year 1993 which also helped her to take part in the same year’s Miss Universe pageant.

The multi-talented popular personality was born on 24th January 1971, in Detroit, Michigan, US. Kenya is an American native and her present age must be 51 years. Likewise, the actress’s sun sign is Aquarius. She was born Kenya Summer Moore to her parents, father, Ronald Grant, and mother, Patricia Moore. At the time of her birth, both of her parents were teenagers. Her mother left her when she was just 3 days old. Then, she was taken by her grandmother, Doris Grant, and her aunt. At the time she was in a television reality show, and she revealed saying that her mother didn’t name her ever.

In addition, she wrote,

“Since birth, my mother made the decision at age 16 to pretend she never had me. She has never spoken to me”.

Also, she added on her Bravo blog that “Even if present in the same room with other people and family, she pretends that I simply don’t exist. She pretends I’m invisible”. Regarding their educational background, Moore went to the Cass Technical High School in Midtown Detroit, US. From there, she completed her studies in the year 1989. Then, she joined Wayne State University and graduated in psychology and minored in communication as well. 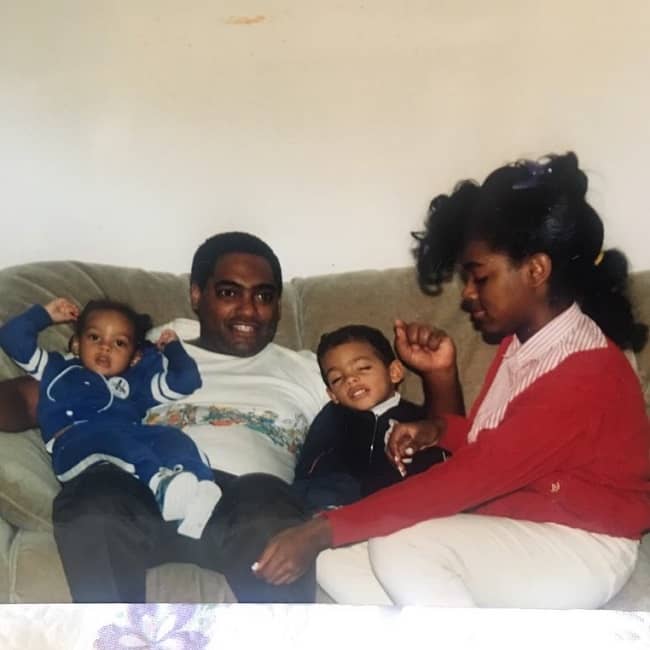 Caption: Kenya Moore with her father and siblings when they were young (Source: Instagram)

As a model, pageant, and actress

At the age of fourteen, she started her career first as a model. She eventually got successful as a model and was presented as cover girl in the January 1992 issue of Johnson Publishing Company’s magazine on the side of the African-American market ‘Ebony Man’. She also did the modeling for the company’s Ebony Fashion Fair cosmetic line. Then, Moore competed and also became the winner of the Miss Michigan USA competition in the year 1993. The competition promoted her to compete in the Miss USA pageant. She won the Miss USA crown and became the American fresher in the Miss Universe pageant of the same year. After some time, she got into an acting career. She got a small character of Dana in the famous TV sitcom “The Fresh Prince of Bel-Air”.

In fact, on 2nd May 1994, in the show’s “Mothers Day” episode that was publicized in the production’s 4th season. After that, she began working in the movies with a minor character of Denise in “Waiting to Exhale” which was out on 22nd December 1995. Kennedy also appeared on other various television series such as “Martin” in the year 1996, “Homeboys in Outer Space” in 1996, and “Smart Guy in the year 1997. She was also present in 2 episodes of the TV series “The Parent ‘Hood” in the year 1999 and “In The House” in the year 1999. Then, she was present in the 1998’s movie “Senseless”. She then got the role of Jasmine Davis in the director, Rob Hardy’s 2010 movie “Trois”.

As a director and producer

Along with the time, she has been present in various other movies as well. Some of them are “Deliver Us From Eva” of the year 2003, “Cloud 9” of the year 2006, and “I Know Who Killed Me” in 2007. The actress has also served as a producer and director on several projects after all these. In the year 2008, she formed her independent film production and home-video distribution company “Moore Vision Media”. The 1st production of the company was the 2010’s movie “The Confidant”. She as a producer and director has also brought the movie “Trapped: Haitian Nights” in which she was also present.

She handled the movie and finished it after it lost its director. Moreover, the movie was filmed in the year 2010 and was out on DVD on 8th February 2011. In May 2012, she turned into the main character of the American show “The Real Housewives of Atlanta” in its 5th season. In addition, she was a part of the movie “Sharknado: The 4th Awakens”. She was also present in other various series such as “Men, Women, & Dogs” in the year 2001 and “Girlfriends” in the year 2004. Some of the other reality shows where she was present are “The Celebrity Apprentice 7” of the year 2015 and “The Millionaire Matchmaker” of the year 2015.

She has also shown her presence on the covers of popular magazines like ‘Essence’, ‘Glamour’, ‘Ebony’, and also in ‘Seventeen’. In November 2007, she brought her advice book “Game, Get Some!”. Similarly,  in the year 2013, she also comes out with a workout DVD, “Kenya Moore: Booty Boot Camp”. She was also present in several music videos for artists adding Nas’s “Street Dreams” in the year 1996 and Jermaine Dupri’s “Money Ain’t a Thang” in the year 1998.

In addition to that, Kendy has also introduced her hair care line name “Kenya Moore Hair Care”. As of now, she is the CEO of the same line. The products of the line add shampoo, hair conditioner, and growth serum among others. The actress has also formed the “Kenya Moore Foundation” which promotes the education of deprived girls from her high school by offering them scholarships. 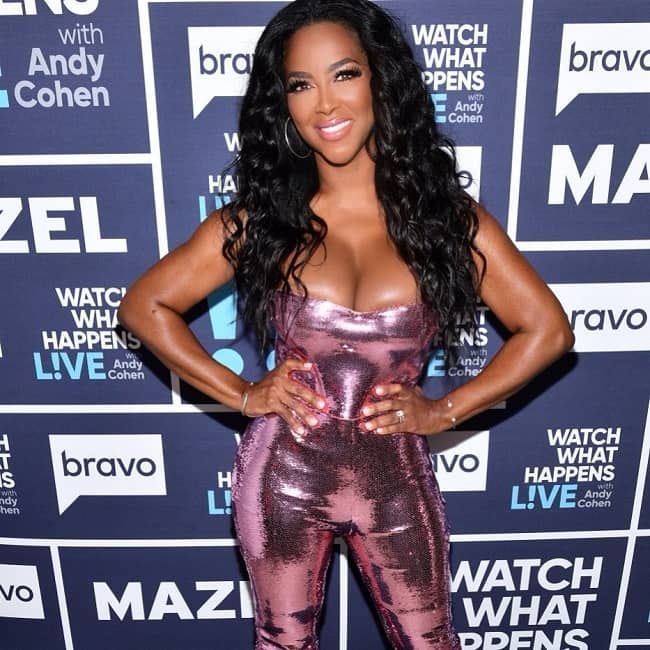 As an actress, model, producer, author, TV personality, entrepreneur, and also social media personality, Kenya Moore is earning a good amount of money. Previously, she had a net worth of around $800 thousand. As of now, she net worth must have reached up to $2 million. Moreover, all these years there were a lot of rumors regarding her financial situation.

The subject has been consulted and even made jokes on RHOA. The major evidence of her problems rose in June 2013 when she was expelled from her $4000 every month Roswell, Georgia mansion. She was unable to pay the rent for some months. Then, as a reply, she wrote, “My former landlord Conya Dillon Weems is the epitome of a vindictive, cold-hearted, evil person”. The rumor is no longer in the air as of now.

The name of Kenya Moore’s former husband is Marc Daly who is a businessman and owns a restaurant. Their wedding was in June 2017. Then, in April 2018 she declared that she and Marc were expecting their 1st kid. Happily, Moore gave birth to a daughter on 3rd November 2018 whose name is Brooklyn Doris Daly. According to her, Brooklyn is the location where she and her former husband Marc met, and Doris is after her late grandmother who was always by her side. Unfortunately, the couple got separated in early 2020. Moore revealed their separation in one of the episodes of the Real Housewives on 9th March 2020. She also claimed that she found “sexting” messages on her husband’s phone which were from his ex-girlfriend.

Regarding the actress’s physical appearance, Kenya is blessed with an amazing body and a beautiful face. She has an average height of 5 feet 5 inches or 1.66 m. Likewise, she has a body weight of around 52 kg or 112 lbs. She has a very curvy body type with body measurements of Moore being 32-23-33 inches. Also, the size of the bra is 33 C. The actress has long black hair with a pair of black eyes. The actress has a dark complexion with a very kind and stunning personality.