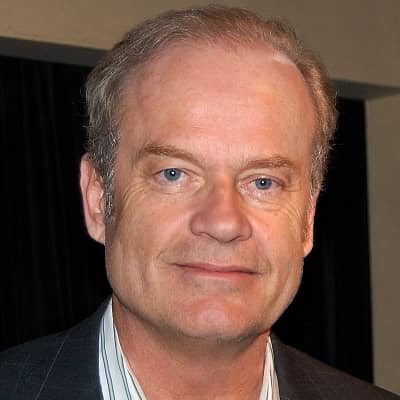 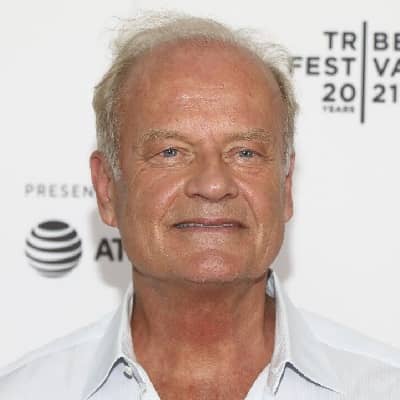 Kelsey Grammer is a famous actor, comedian, voice actor, producer, director, writer, singer, and also an activist. Kelsey Grammer rose to fame as a part of the NBC sitcoms, “Cheers” and Frasier” as the psychiatrist Dr. Frasier Crane.

Allen Kelsey Grammer’s birthdate is 21st February 1955 and his birthplace is Saint Thomas, Virgin Islands, U.S. His age is 67 years old and his zodiac sign is Pisces. Similarly, the actor holds an American nationality, follows Christianity, and has English, German, Irish, and Scottish descent. The name of her proud parents is Frank Allen Grammer Jr. and Sally Grammer.

For his higher studies, he went to Julliard School. In the late 1970s, the actor got 3 years of internship at the Old Globe Theatre, San Diego after completing his studies. In addition, he spent some of his time at the Guthrie Theatre in 1980in Minneapolis, Minnesota. It was before he made his first Broadway appearance as ‘Lennox’ in 1981 in Macbeth. 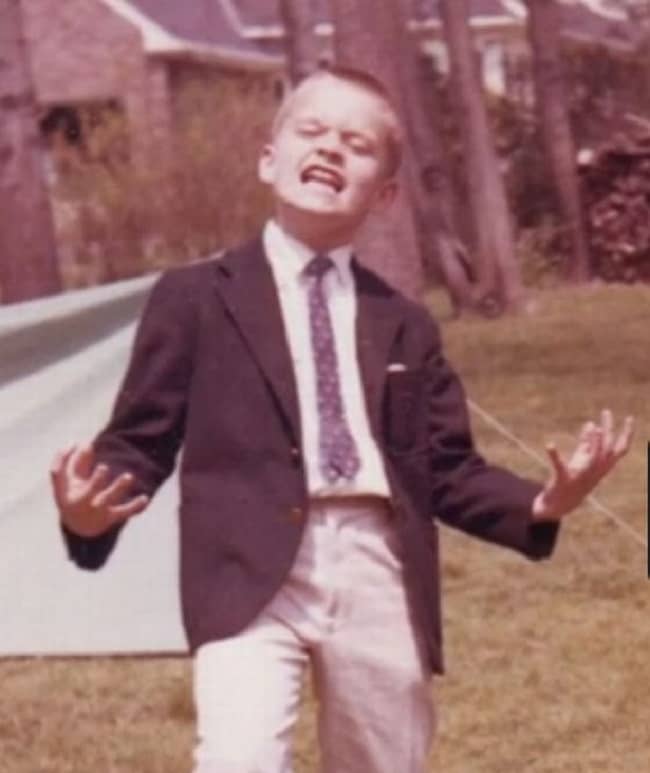 Caption: Kelsey Grammer when he was young (Source: The Mirror)

After some training, Grammer got the role of Michael Plummer in the Broadway revival of ‘Othello’. In 2010, he made his first Broadway musical appearance in ‘La Cage Aux Folles’. The actor got his first TV role as Stephen Smith in the early 1980s for the NBC series, ‘Kennedy’. After then, he began going for something big and even got attention after acting as Dr. Frasier Crane in the NBC sitcom, ‘Cheers’. As a director, Kelsey has worked on over thirty episodes in the 2nd half of the same series. From 2005 to 2007, the TV dramas, ‘Back to You’ and an adaptation of the British drama, ‘The Sketch Show’.

However, they did not go well and were taken down as people did not find it very funny. The American actor finally received the Golden Globe Award in 2012 for the category of Best Actor. This was for his performance as Mayor of Chicago in a TV drama, ‘Boss’. Likewise, he got villain roles in the Paramount films, ‘Transformers: Age of Extinction’ and ‘Partners’. He was present on ‘Medium’ as the Angel of Death. He was also present in the ‘Star Trek: The Next Generation’ episode ‘Cause and Effect’ as Captain Morgan Batesob.

In addition to his career, he gained more attention due to his mid-Atlantic accent while doing voiceovers. As a voice actor, he worked on ‘The Simpsons’ for Sideshow Bob, on ‘Toy Story 2’ for Stinky Pete, in the FOX film, ‘Anastasia’ for Vladimir, and in ‘Gary the Rat’ for the lead character. The actor even has recited ‘Mickey Mouse – Once Upon a Christmas’. Likewise, his voice can be found in other several commercials like Hyundai and Honey Nut Cheerios, where the wolf in ‘Little Red Riding Hood’ was his character to play.

Kelsey has also begun his own production company with the name “Grammnet Productions”. The CW sitcoms ‘Girlfriend’ and ‘The Game’ are its productions. As a producer, he has also produced the NBC film, ‘Medium’. He is a part of the Republican Party and has stated he wants to work for the United States Congress one day. He has some interest in being the Mayor of New York and also the US Presidency. Moreover, he financially supported the ‘Tea Party’ movement like lower taxes but was contrary to matters like same-sex marriage. 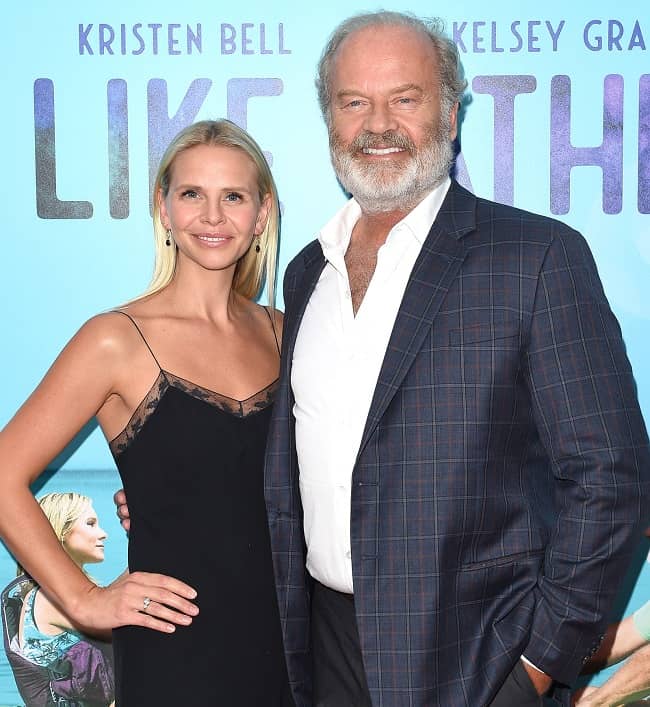 Caption: Kelsey Grammer with his spouse at an event (Source: People)

The famous American personality has been making a massive amount of money from his entertaining career. Kelsey Grammer’s recent net worth is estimated to be approximately $60 Million USD. His primary source of income is from his various professions as an actor, director, producer, voice actor, etc.

As for the start, he started making money as an actor for a long time too. Still, the actor goes on several interviews and shows, endorses brands, and makes money. Since the day, he entered the entertainment industry as an actor, he never seem to have faced any financial issues.

Coming to his relationship status, the American actor has been married 4 times and even has 7 kids. His 1st wife was Doreen Alderman with whom he has a daughter from his first wife. After his divorce, he had another daughter from Barrie Buckner, a hairstylist and makeup artist. His 2nd wife’s marriage was Leigh Anne Csuhany, a dancer with whom she stayed for just a year. Then, he was dating Tammy Alexander but eventually tied the knot with Camille Donatacci, the Playboy model. With Camille, he became the parents of a daughter and a son.

The actor’s 4th wife is Kayte Walsh, a British flight attendant with whom he has 1 daughter and 2 sons. Sadly, his small sister was raped and murdered at the age of just eighteen. In the Oprah Winfrey show, the actor said that he will let off his sister’s rapist if they will accept their wrongdoing. In 1998, Kesley filed a complaint contrary to Internet Entertainment Group (IET) for thieving one of his sex tapes. After some time, he let go of the charges as the organization was claiming to have no such tape. Also, he was alleged of statutory raped his daughter’s caretaker.

However, these charges were also taken down since there were fewer proofs. Moreover, Grammer has an alcohol and drug abuse history. He was arrested and sent to prison twice for consuming cocaine. He was also known to act unreliable at work and consequently taken to the Betty Ford Centre for alcohol therapy. In 2008, the actor got a mild heart attack when he was enjoying his holidays in Hawaii. Also, he endorsed the outbreak of stress produced after his sitcom, ‘Back to You’ got taken down by FOX TV. 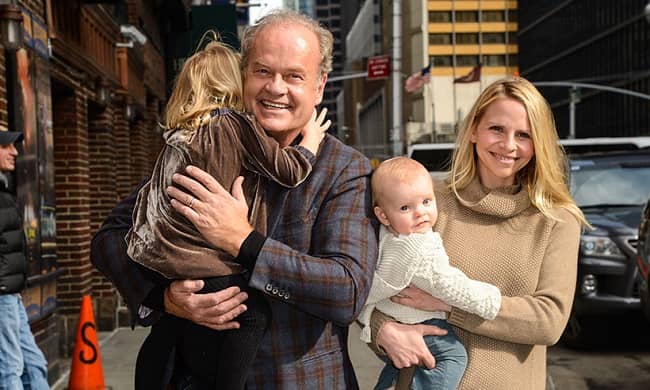 Regarding the actor’s body measurement, he has an average body type with a dashing personality. He is 6 feet 1 inch or 1.83 m tall and he weighs about 81 kg or 179 lbs. Similarly, the American producer has beautiful blue eyes with short dark brown hair. Being an actor, Kelsey has been keeping himself fit and healthy for which he must have been following a well-maintained daily routine. Moreover, the actor has a fair complexion and looks like a gentleman as well.

Regarding Kelsey’s presence on the social media platforms, he has been quite active there for a long time. He has an Instagram account with over 27.8 thousand followers as of June 2022. Similarly, the American actor has a Facebook page with 152 thousand followers. He joined Twitter in June 2014 where he is still active. There he has already gained 97.7 thousand followers. Observing his online accounts, the American director seems to love traveling and London is his best destination.