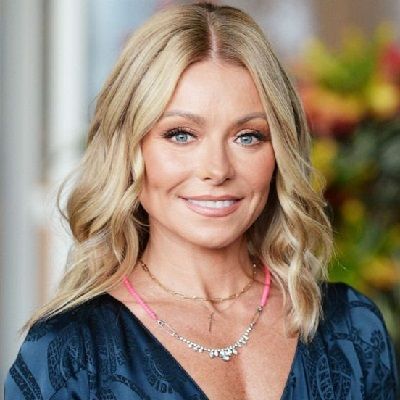 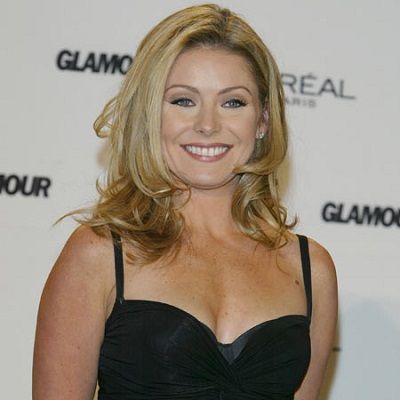 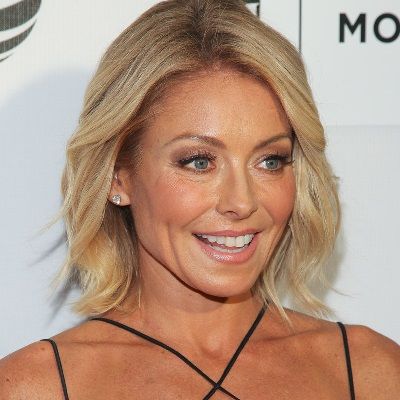 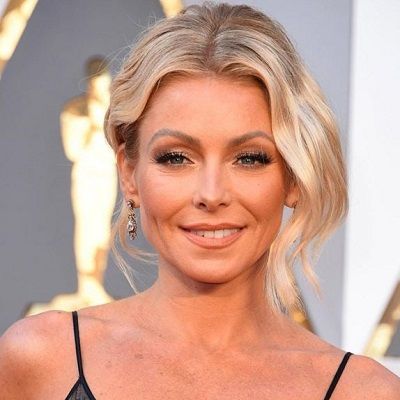 Kelly Ripa is an American actress, dancer, talk show host as well as a television producer. Kelly Ripa has gained a respectable position in the American entertainment field.

Kelly Ripa is 49 years old as of 2019. She was born on October 2, 1970, in Stratford, New Jersey, U.S.A. Her mother’s name is Esther and her father’s name is Joseph Ripa. Her mother was a homemaker and her father was a bus driver and labor union president. She grew up with a sister, Linda Ripa. She was highly interested and dedicated to acting and dancing from a very early age. Likewise, she learned ballet since she was three years old and also plays the piano and other musical instruments. She is the one to enter into the acting field with her family.

Moreover, she belongs to American nationality and mixed ethnicity of  Italian and Irish. 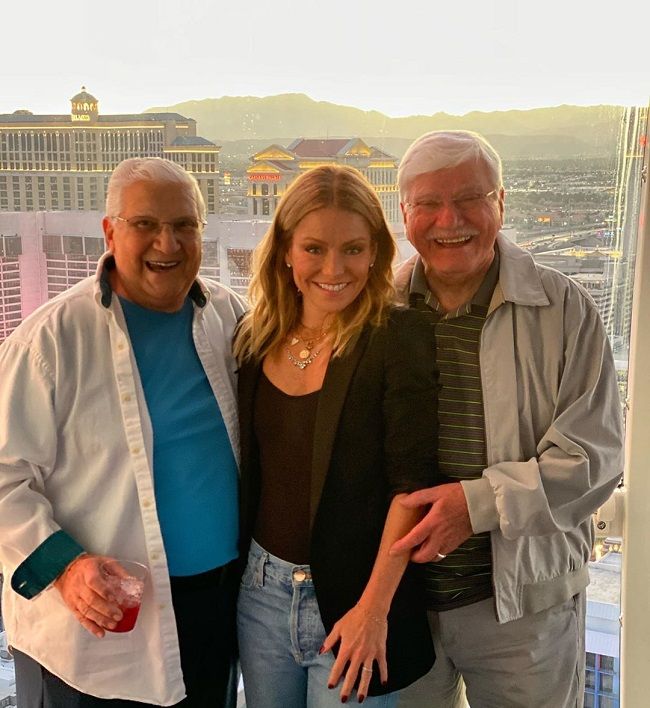 Caption: Kelly Ripa with her father and uncle. Source: Instagram

Regarding her educational background, she went to Eastern Regional High School. She pursues her career in the acting field with encouragement from her drama teacher. Moreover, she began studying ballet at the age of three. She later attended Camden Community College in New Jersey, where she performed in local theater productions.

Talking about Kelly Ripa’s professional life, she started her career as a dancer and appeared in the T.V series “Dance Party USA” (1986-1992). After that, she appeared in another successful T.V series “All My Children” as Hayley Vaughan which is broadcasted on ABC. For this, she appeared alongside husband and co-star Mark Consuelos until she left the show in 2002. Moreover, she returned for two episodes in this show to celebrate its 40th anniversary.

Likewise, she is best known for her television work. She has several feature films to her credit. Likewise, She has made an appearance in the acclaimed Miramax feature Marvin’s Room in 1996 alongside Meryl Streep and Leonardo DiCaprio.

History of Live! with Kelly

She has also co-hosted the show ‘Live! with Regis and Kelly’ since 2001. It is an ABC morning talk show and her co-host is Regis Philbin. Kelly replaced Regis’s longtime co-host, Kathie Lee Gifford.

Later in January 2011, her co-host, Philbin retired from Live! at the age of 80. Kelly took over hosting duties and the show’s name changed to Live! with Kelly. Similar to the vetting process that she underwent to team up with Philbin, she also had various guests co-host the show with her. Again in September 2012, the show was named Live with Kelly and Michael. It was done so since the former football star Michael Strahan became the co-host of the show.

Tension filled the set between in April 2016, when Michael announced he leave from the show for Good Morning America. She wasn’t informed of his departure until the day of the official announcement and as a result, she did not show up on set the next. She returned the following week and stood in front of the audience to discuss “respect in the workplace.”

Despite the speech, the tension between the co-hosts was uncomfortably conspicuous and after consulting with producers from both Live! and Good Morning America, the co-hosts parted ways in May 2016, which was four months earlier than planned.

The show was again renamed Live! with Kelly. In April 2017, she introduced Ryan Seacrest as her new co-host and the show was renamed Live with Kelly and Ryan. Ryan has hosted American Idol, the radio show – American Top 40 and Dick Clark’s New Year’s Rockin’ Eve. And Ryan made his first appearance on Live back in 2003. 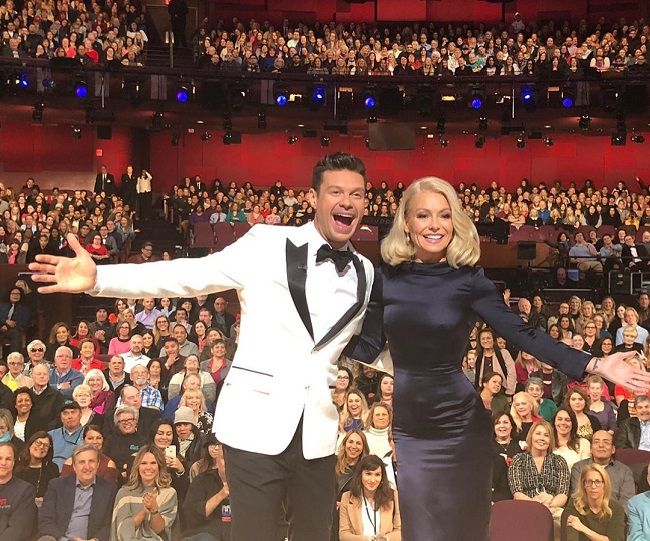 Ripa has also ventured into primetime in September 2003 on Hope & Faith, playing Faith Fairfield, an unemployed ex-soap star. Since 1996 The half-hour sitcom, co-starring Faith Ford, Ted McGinley, and Megan Fox, gave ABC its best Friday premiere score. However, the show ended in May 2006 with Ripa declaring she “never wanted to work that hard again.”

Furthermore, Ripa has served as a spokesperson for several companies. Previously, she has partnered with Tide, 7 Up, Pantene, and TD Bank, but currently works primarily with Electrolux and Rykä. She also oversees the design of her own fitness-inspired activewear line, The Kelly Ripa Collection. Moreover, she stars in the Electrolux television and print advertising, and her image is used on point of sale materials and extensively online.

Kelly Ripa is a good looking talented actress. She has won several awards for her hard work and dedication towards her acting career. She has received the Best Actress Award at the New York International Independent Film and Video Festival for her work in The Stand-In.

Likewise, she has got five Soap Opera Digest Awards and three Daytime Emmy Award nominations, Emmy Award for Outstanding Special Class Special. Also, the Hollywood Chamber of Commerce honored her with a star on the Hollywood Walk of Fame. Furthermore, on September 15, 2006, she broke the Guinness World Record as twenty-four banana-cream pies were tossed at her mouth in one minute, as part of a Guinness World Record Breaker theme week on Live!.

Kelly Ripa has accompanied a great amount of money through her professional career. She has an estimated net worth of around $120 million and an annual salary of around $20 million.

What is the relationship status of Kelly Ripa?

Reflecting on Kelly Ripa’s relationship status, she is a married woman. After being in the long term romantic relationship with Mark Consuelos, with whom she met on ‘All My Children’, for several years. They tied a knot and exchanged vows on May 1, 1996.

However, they have already welcomed three children named Michael Joseph, Lola Grace, and Joaquin Antonio Consuelos. She is living happily with her husband and kids in New York City. Moreover, there is information that the lovebirds eloped in 1996 instead of marrying each other in traditional style. 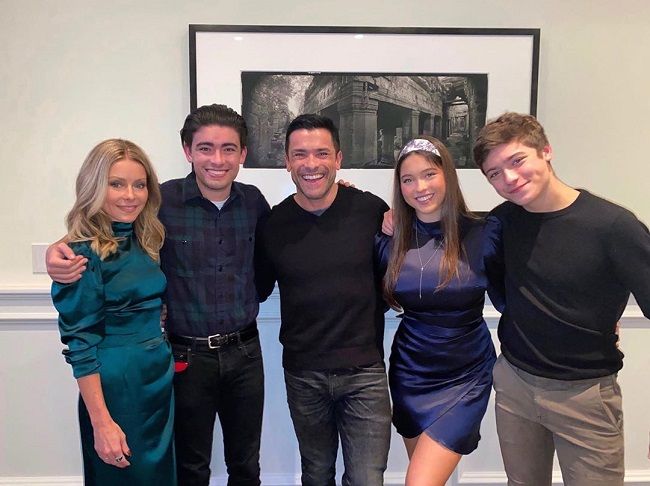 Caption: Kelly Ripa with her husband and children. Source: Instagram

Kelly Ripa addresses that she was involved in the college cheating scandal. Though Ripa and her husband’s name was not mentioned identically, they were assumed as they have college-aged kids. However, there are no other rumors regarding her personal as well as professional life.

Ripa has an amazing personality and a stunning body. She has a good height of 5 Feet and 3 Inches(1.61m) and weighs around 50kg. Her body size measures 32-24-33 inches. Her bra size is 32A. Moreover, her hair color is blonde and her eye color is blue.