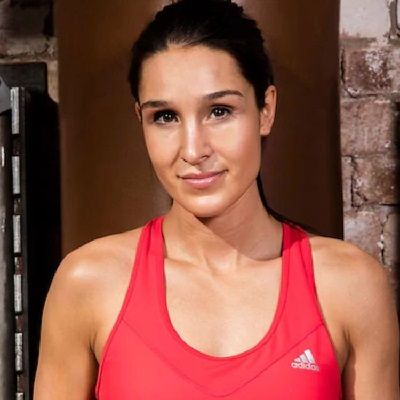 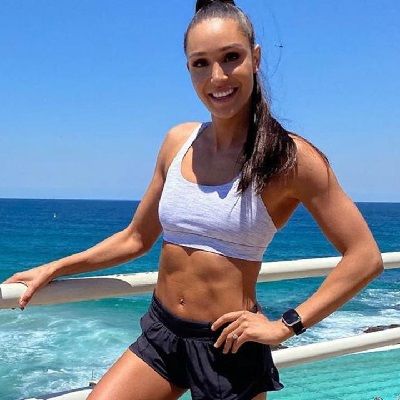 Kayla Itsines is a famous Australian personal fitness trainer, an author as well as an entrepreneur. Kayla Itsines is the world-famous owner of the series of fitness eBooks called ‘Bikini body training guide’ and also a nutrition planning and workout app called ‘Sweat with Kayla’.  The app became the most revenue-generating app in 2016. She is presently a YouTube star and a popular social media personality.

Kayla Itsines was born on 21st May 1991 in Adelaide, South Australia, Australia. As of 2020, she is 29 years old. She was the elder daughter of her parents are Anna Itsines and Jim Itsines. Both of her parents were teachers whereas Leah Itsines who is her younger sister is also a personal trainer and food stylist.

Itsines grew up in Australia. Her nationality is Australian and belongs to Greek-Australian ethnicity. She had the dream of becoming a beauty therapist. As a child, her interest was in basketball but was underweight and unhealthy. When Itsines was 15, she got the medical advice that she might suffer from fertility problems due to endometriosis.

After realizing that her infertility can be cured, Itsiness started working out at a gym. She got so much overwhelmed by fitness that she abandoned her primary goal of becoming a beauty therapist. After completing her high school studies at Adelaide, he graduated from the Australia Institute of Fitness as a Master Trainer at the age of 18.

After graduating from the University, Kayla started her career working at a women’s gym in Adelaide. She soon realized that her clients were not having satisfying results by performing workouts on machines. So, she decided to give her clients a routine of aerobic exercise that mainly focuses on smaller inner thighs, flatter abdomen and toned arms which her clients loved it.

The moment he realized that her clients loved to workout at home rather than the gym, she designed exercises for working out at home with less equipment and less space. He also personally started training her sister’s friend who wanted to improve their physique so that they could play Netball on their high school team. She promoted her new exercises through her Instagram by uploading a picture of her clients before-and-after their progress. She had a supportive life partner who has to aspire to her in becoming a successful fitness model. She met Tobi Pearce at a gym in 2013. At that time, Tobi was studying to get two degrees in Law and Commerce. He was also studying to be a personal trainer.

In March 2013, Kayla and Tobi founded a Bikini Body Training Company where she was the director and Tobi was the CEO. She published the first two ‘Bikini Body Guided’ named Itsines’s workout in first volume and nutrition information from dietitians Julie Dundon and Anne Schneyder of Nutrition Professionals Australia in the second volume in January 2014. By the following October, more than a million guides had been downloaded. Her guide was neither for muscle gain or weight loss but was for having a desired particular look.

In 2015, Itsines went on a world tour, the ‘Kayla Itsines Bootcamp World Tour’ whose motto was to lead-free group fitness classes. She toured in Australia’s capital cities, New York City, Los Angeles, and London. In April of the same year, she was featured in Apple advertisement for the Apple watch which demonstrated the heart-rate monitor feature of the product. 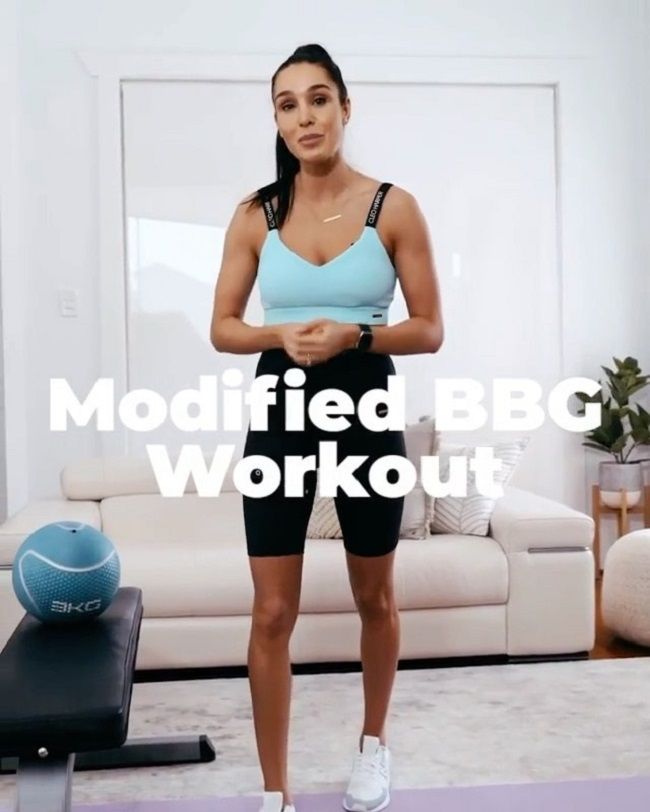 The initial release of ‘Sweat with Kayla’ app in November of 2015 met a criticism from customers that the app was too costly and customers demanded a discount for it as they had already paid for Bikini Body Guided eBook. So, she had to reduce the cost of the app to $1 for the first month to the existing customers of her previous eBook.

She gives credit to her social media success that has allowed her to keep track of followers and their fitness life. She is happily living with Tobi together since 2013. She has two Siberian huskies named Ace and Junior. Itsines has given up alcohol in 2011. Currently, she is personally training a small number of long-time clients along with her staff.

Her details about achievements are unknown. However, Itsines has toured many places with her training schedule and provided free group, fitness classes. Kayla has earned herself the title of ‘Fitness Queen’. However, she hasn’t won any recognizable awards in her life.

Kayla is the Fitness Queen of 2016. In 2016, her app became the app to earn the highest revenue than other fitness apps. Her net worth was reported to have been around $46 million. But as of 2018, her approximately net worth is $63 million US dollars.

Kayla is in a loving relationship with her fiance Tobi Pearce since 2013. She and Tobi announced through Instagram in December 2018 about their relationship. They said they are expecting their first child in May 2019. Recently, she gave birth to a little girl and named her Arna Leia Pearce. 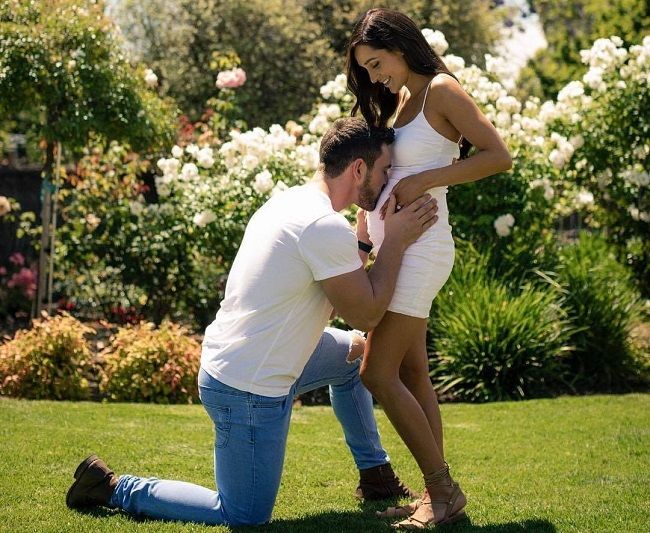 She never had a controversy with anybody because she committed herself fully to her fiancé Tobi. Likewise, she stays away from all kinds of possible rumors and follows a healthy life.

Kayla’s height and weight are 173cms and 121lbs respectively. Because she’s a fitness trainer she has an athletic body structure. She has been maintaining her body perfectly. Her body measurements are 34-26-35 with a bra size of 33B. She possesses hazel colored eyes with dark brown hair. Furthermore, Itsines’s shoe size is 8. 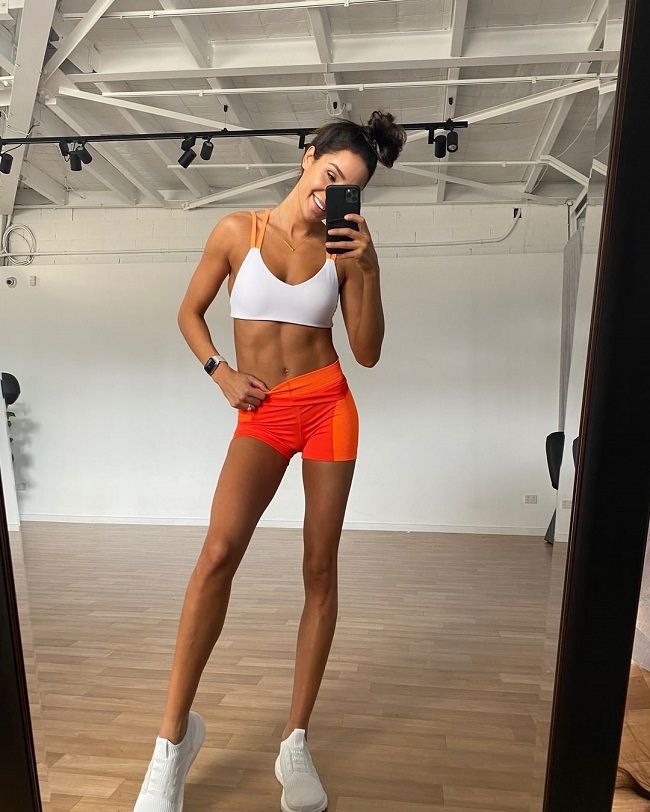 Kayla Itsines’s is very active on her social media platforms, especially on Instagram. Although she doesn’t upload her photo she shares the before-and-after photos of her clients to motivate her followers. Currently, Itsines have 12.6M followers on Instagram which is comparatively higher than her 409.3K twitter followers. Furthermore, she also has her own YouTube channel since 2012. Now, her channel has over 332K subscribers. Her YouTube videos are generally about fitness and tips to stay healthy.