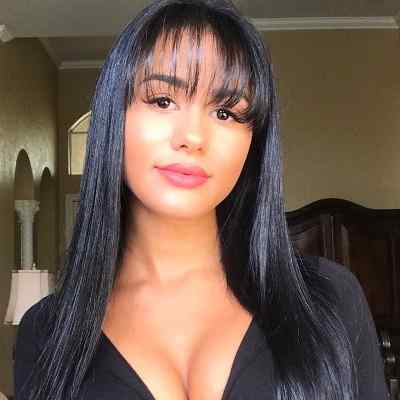 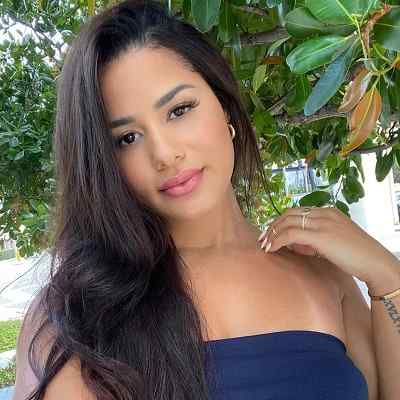 Katya Elise Henry is 27 years old. She was born on June 14, 1994, in Minneapolis, MN, the United States under the astrological sign Gemini. Her father’s name is Derick Anthony Henry and her mother’s name is Tawnya Lynn Nelson. Likewise, Her father is a professional bodyguard and her mother is a personal Trainer. She has two older sisters named Tanaya Henry and Gabrielle Henry. Her sister is an Actress, as well as a Jewelry Designer.

Talking about her nationality, she is an American. She holds the mixed ethnicity of Russian, African American, Native American, and Swedish. As a child, she raised up in Minnesota and Miami along with her parents. 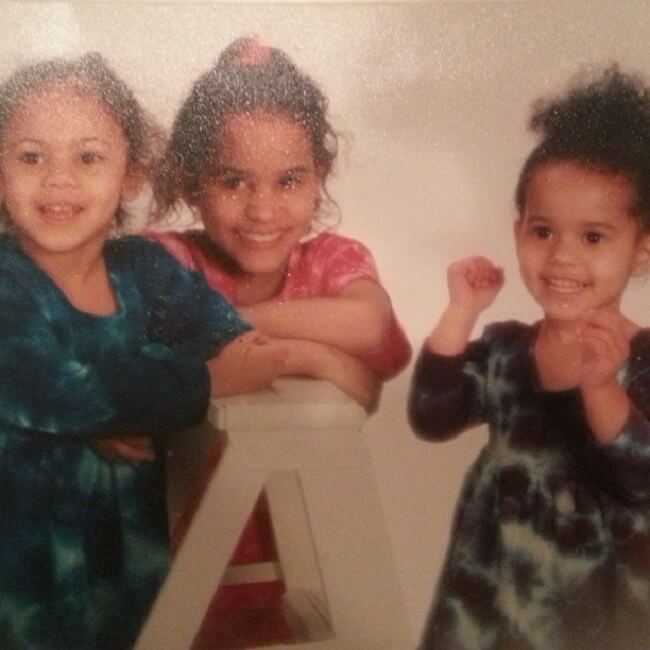 Concerning her educational background, she attended Prior Lake High School. Then, she went to Horizon High School. Likewise, she completed her graduation from the Desert Mountain High School in Scottsdale, Arizona.

Katya spent her youth training to be a cheerleader, saying she was always “fit and healthy”. Though she enjoyed this sport, she never felt fully happy with the body it gave her. She always aspired to have a toned, and curvy physique.

She heavily focused on cardio and her cheerleading workouts took up a lot of time.  This workout interrupted her from adding any significant muscle in the gym, as she couldn’t manage a calorie surplus. Because of this, she chose to quit cheerleading altogether.

During her time cheerleading, she didn’t focus on her diet at all and ate junk food quite frequently. After learning from her mother on the consequence of junk food, her diet is now “97% clean,” consolidating healthy, nutritious food.

Like most fitness enthusiasts, she also started focusing on her macro-nutrient content in each meal, consuming a lot of protein and healthy fat, but dodging carbs as much as possible when she’s attempting to lose weight.

In her early year as a cheerleader, she was unhappy with her physique. So, she decided to make a change. When she stopped cheerleading, she understood exactly how she wanted to look but didn’t know where to start.

With the help of her mother, she got an introduction to the gym. Her mother shows her how to lift weights and build muscle. Her mother took her under her wing, teaching her new techniques in the gym. She says, “I was blessed with a wonderful mother who is also, luckily, a personal trainer”.

The more she learned about supplementation, proper nutrition, and weight-lifting from her mother, the more she “fell in love with it”. She liked the training that went into building an effective workout plan, along with the results it gave her as she grew.

As of now, she trains 4-days a week to maintain her physique, Similarly, she has called herself “the glute master,” and focuses her routine heavily on this area, but also fits in abdominal workouts and upper body exercises where she can.

After several years of eating meat-based foods such as beef stakes, chicken, and pork, she has since switched to a vegan way of eating.
In terms of supplementation, she only uses whey protein to help with her muscle-building goals as of now. She support a healthy diet, rather than a meal replacement.

Professionally, Katya is an American fitness model and a personal trainer. Fast forward to today, and she has surpassed all of her goals; she’s created her ideal beach body, become a fitness entrepreneur, and along the way, attracting a large fan base on social media.

Around this time, she also started using social media and uploading photos of her early progress on Instagram. Her toned glutes and abs instantly became popular and garnered good followers.

Following this rise to fame, she spoke on her online followers that she hoped to “influence them to be better” through her posts. She enjoyed watching her own progress as she glanced back through her photos, knowing the full benefits of training 4-days a week in the gym. Moreover, she has also partnered with fitness and supplement brand EHPlabs.

In addition to this, the fitness model has even starred in Joe Weider’s Olympia Weekend and Body Power Expo. This talented model has endorsed for several other popular brands such as Teami Tea Blends, BrighterWhite, and DreamLab & Co.

Moreover, she is also an Instagram celebrity suppressing more than 7.5 million followers. Similarly, she is a vegetarian. She has launched her self-titled YouTube channel on February 15, 2017. Following her success on Instagram, she created a YouTube channel for posting answers on fan’s questions. Her first debut video titled “ANSWERING YOUR QUESTIONS! (FAN Q&A) || KATYA ELISE HENRY,” was posted on August 25, 2017. The video initially garnered more than 370,330 views.

She posts videos with content related to Q&A, Vlogs, and Health & Fitness. One of the most viewed and popular videos on her channel titled “GYM DAY with Katya!” which has garnered over 3,386,347 views. Some of the other notable videos include “KISS MY PEACH SWIMWEAR PHOTOSHOOT,” “10 Exercises With Kettlebells | A FULL BODY WORKOUT!,” and “EXTREME BOOTY WORKOUT – GYM EDITION.” These videos suppressed more than millions of views.

In this way, she went onto become a world-renowned fitness model and social media star. As of now, she has not won any awards in her career. Besides, she has been performing a great job in her career and her works have been loved and appreciated by many people around the world. 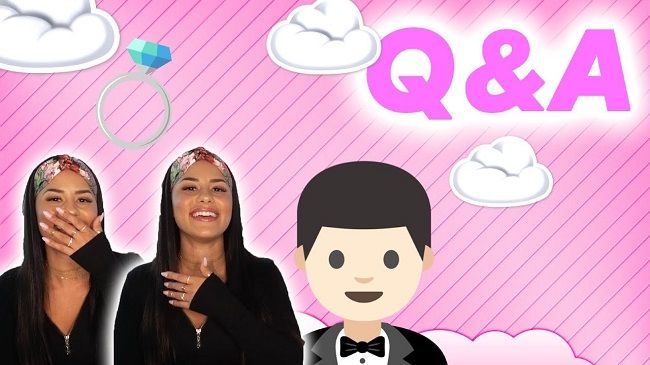 Speaking on Katya’s earning, she is a famous fitness model and Instagram model who has earned a handsome amount of money from her profession. Therefore, her estimated net worth is around $5 million but her salary is under review. With no doubt, she is surely living a very happy and joyful lavish lifestyle with the good fortune she bagged.

Reflecting on Katya’s personal life, she is single and unmarried to date. However, this beautiful 26-years-old fitness enthusiast has previously been in a beautiful relationship. She has dated NBA Lakers player Kyle Kuzma from late 2018 until mid-2019. Then later she started dating another basketball player, Tyler Herro.

Likewise, she had also dated singer Austin Mahone in early 2016. In the summer of that year, the duo took a road trip together to Tampa, Florida. In February 2017, Austin confirmed the rumors which had been flying around for a few months about their break up.

Moreover, So far, there are not any drastic rumors regarding her personal and professional life. She more focuses on her career rather than stuck in any controversy.

Beautiful and bold fitness model Katya has a fit body physique. She stands a height of 5 ft 2 inches and weighs around 53 kg. Moreover, she has a pair of beautiful dark brown eyes and black hair. Besides this, there is not any information regarding her other body measurements.

She loves tattoos and has several tattoos: a cross on the back of her neck, the word ‘Blessed’ on her right hip. Similarly, she possesses a quote by Emme Woodhull-Bäche tattooed on the left side of her rib cage that reads, “Thorns and Stings / And Those Such Things / Just Make Stronger / Our Angel Wings.” 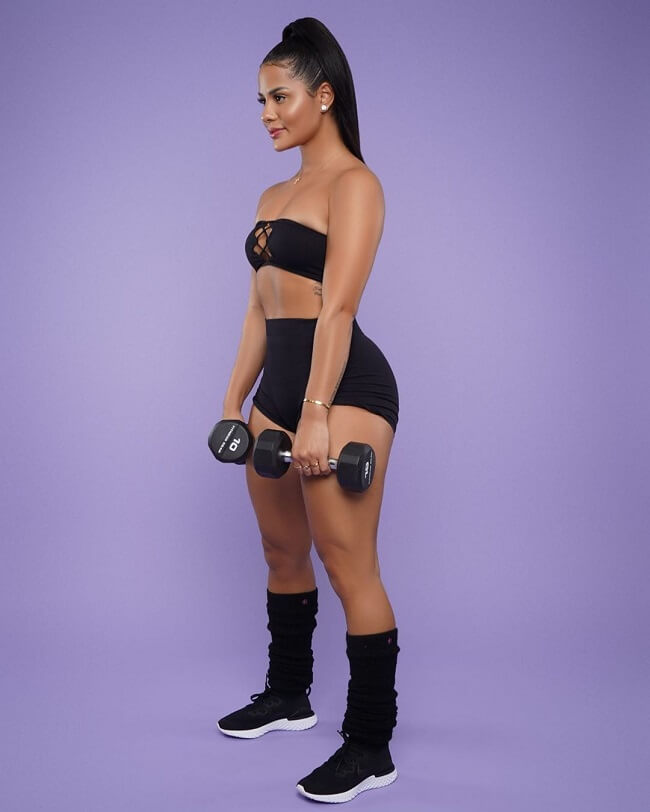 Caption: Katya Elise Henry posing with a dumbbell on the hand (Source: Instagram)

Katya is active on different social media platforms such as Instagram, Twitter, and Facebook. She has garnered massive popularity on her social media accounts. On Instagram, she goes by the handles @katyaelisehenry with more than 7.6 million followers with her almost 3,222 posts. She also has another secondary Instagram account under the username @workouts_by_her which has garnered more than 497k followers.

Currently, she has gained around 392.3K followers on Twitter and nearly 1.68 million followers on her Facebook account.  Additionally, she runs a self-titled YouTube channel where she has earned around 386K subscribers with almost 32 million total views.  She also has provided her email id [email protected] for any kind of business inquiries.