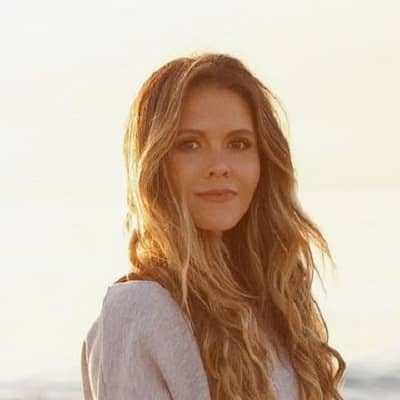 Katrina Scott is an American YouTuber, fitness coach, author, and social media influencer. Katrina Scott is also an entrepreneur. She has a fitness brand named, “Toned It Up”. She established herself as a New York Best Selling author via her fitness-related books. Furthermore, she also has an Instagram account with more than 405k followers. She also has a YouTube channel, Tone It Up with 788k subscribers.

Katrina Scott was born on November 4, 1983, and is 37 years old. She is originally from Londonderry, Rockingham County, New Hampshire, the United States of America. She is currently residing in California. Reflecting on her family background, she is quite secretive. She has not disclosed the identities of her parents. Similarly, she also had not said what her parents do for a living. Furthermore, she has an older brother named, Stephen Hodgson.

She is a graduate. She has a bachelor’s degree in health sciences with a minor in nutrition. However, she has not disclosed which university or college she attended to complete her education.  She might have enrolled in one of the best colleges and schools in the United States of America.

Reflecting on her professional life, Katrina is a fitness coach, entrepreneur, YouTuber, author, and social media influencer. She leaned towards fitness and a healthy lifestyle when she was teased for her weight in elementary school. With the support of her parents, she started gyming. Her parents converted the basement into a mini gym. Since then, she commenced to work out and have a fit body. She also started to control her diet. Later, after her graduation, she began working at fitness clubs and has several certifications as a ‘master trainer’.

She decided to start a YouTube channel, “Tone It Up “for creating content based on fitness and a healthy lifestyle. Scott joined YouTube on September 6, 2008. Her YouTube channel has amassed 72M views altogether. Unfolding her YouTube channel, “ToneItUp with Karena Dawn & Katrina Hodgson” is the first-ever video uploaded on her channel. “Total Body Tone Up!” is the most popular video on her channel. It has garnered 3.7M views until now. Similarly, other videos with millions of views are “Tone It Up | The BEST Band Workout!” and “Bikini ARMS Routine! BIKINI SERIES ” to name a few.

She with her best friend,  Karena Dawn started the fitness brand named Tone It Up. The business started with the investment of $3k soared to a million dollars business as of now. Their products and services are very promising. They sell protein shakes, meal plans, exercise balls, yoga mats, and toning ropes to name a few. Both the friends are handling online and offline business commendably. Their website is full of amazing products and fitness blogs and healthy eating habits.

The success of their entrepreneurship encouraged them to start a reality TV series titled, “Toned Up”. The TV series aired in the year 2014 and off-aired after season 1. The cast was her herself with her best friend, Karena. Andrews Lamar was a male stripper while Brian Leckrone portrayed herself. It was directed by T.J Shanks.

From 2016-2019, Scott was seen in the TV series, “Home & Family”. Furthermore, it is a talk show where the guests talk about home improvements, parenting, fitness enhancements, and lifestyle. The other stars are Kim Douglas, Debbie Matenopoulus, and Mark Steines. Undoubtedly, her main topics of talks are fitness enhancements and a healthy lifestyle.

She owns an Instagram account, @katrinascott with more than 405k followers. Her Instagram account is full of healthy meals, family photos, and Tone It Up products. She is a source of inspiration to lots of women who has an inferiority complex because of their body weight. Her immense popularity has also helped the fashion designer, Lora Jane. She aided Lora to launch her designs and clothing store. 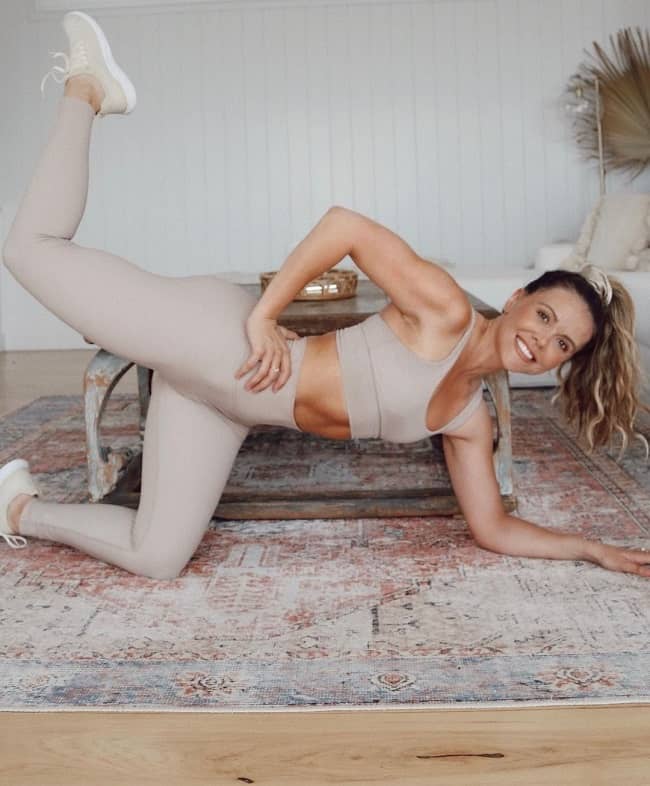 She is also a New York Times best selling author. She is a multi-talented woman who reached new heights along with her best friend, Karena Dawn. “Tone It Up: 28 Days to Fit, Fierce, and Fabulous (2015) and Tone It Up: Balanced and Beautiful: 5-Day Reset for Your Body, Mind, and Spirit (2018)” are some of the books that have published to date.

Katrina is a successful YouTuber, entrepreneur, social media influencer, fitness trainer, and author. She is a brand herself. Her main source of income is YouTube. However, her sources of income are not recorded separately. She has worked hard enough to live a lavish life on her own. She is also a source of inspiration when it comes to fitness and entrepreneurship. Her estimated net worth is recorded to range from $1M-$5M. 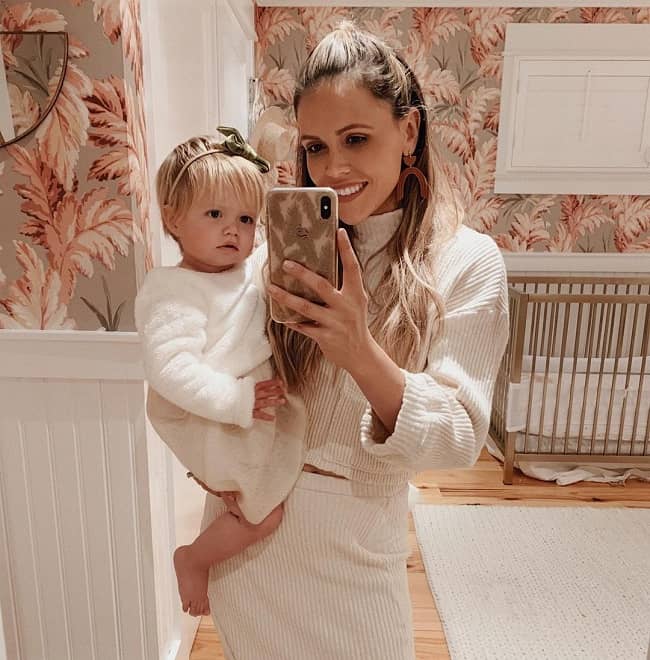 Caption: Katrina taking a mirror selfie with her daughter(Source: Instagram)

Scott’s sexual orientation is straight. She is married to Brian Scott. Brian and Katrina started seeing each other in 2005. A decade later, in 2015 the couple exchanged the vows. The duo is blessed with an adorable daughter named Isabelle. They are a happy family of three. There is no record of her past relationships. 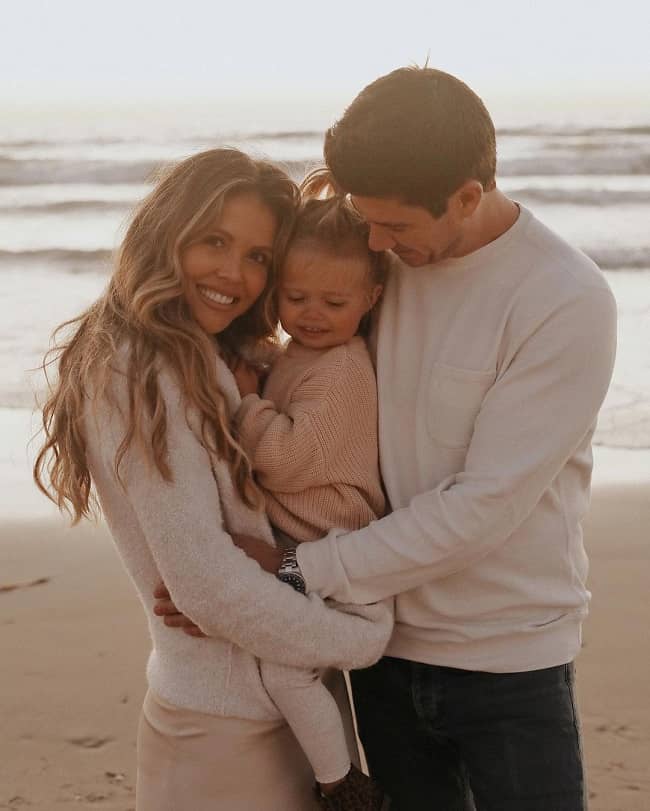 Scott is a gorgeous woman. She stands tall with a height of 5 feet and 6 inches. Katrina weighs 62 kg which is quite convincing as per her height. Furthermore, her chest size is 34 inches. Similarly, she is best known for her athletic build body. She has got a healthy and fit body. Reflecting on her eyes, she has appealing Light Brown eyes. Her Dark Brown hair adds an extra charm to her personality. However, she often dyes her hair. Furthermore, her toned physique, long, straight hair, charming smile, gleaming face are the distinctive features.