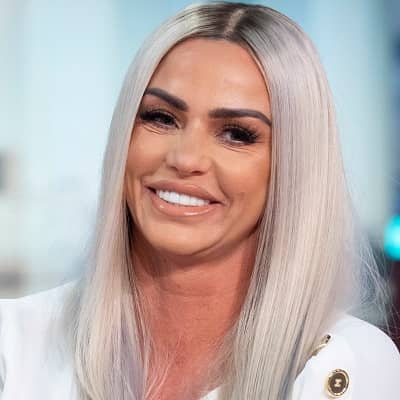 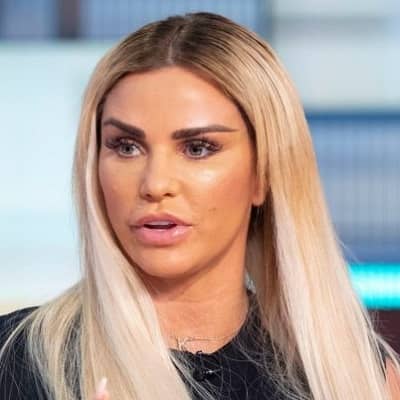 Katie Price is an English media personality, model, businesswoman, author, and singer. Katie Price initially gained fame in 1996 for her glamour modeling work with appearances on Page 3 in British tabloids The Sun and The Daily Star.

Reflecting on Katie Price’s relationship status, she is in a romantic relationship with Carl Woods as of 2020. This English media personality has been linked to several affairs as well as marital relationships.

Price confirmed her relationship with Carl Woods recently and shared a couple’s selfie with her new boyfriend. The photo exposes her sat on her crushed velvet grey sofa gazing up at the camera while her man can be seen nodding in front of her and looking at the lens too. She captioned the photo: “Best on earth,” followed by a globe emoji.

Price had dated Kris on-and-off for over a year. In July of 2019 she announced she was engaged to Kris Boyson, the couple split up a month later.

She has married five times.  Her ex-husbands are Peter Andre, Alex Reid, and Kieran Hayler with whom she married three times.

Likewise, she gave birth to her first child, son Harvey, in Brighton in May 2002. Her first son’s father is retired footballer Dwight Yorke. Her first son was found to be blind, with septo-optic dysplasia, which causes optic nerve development unpredictable. Additionally, he has been diagnosed on the autistic spectrum and to have Prader–Willi syndrome. 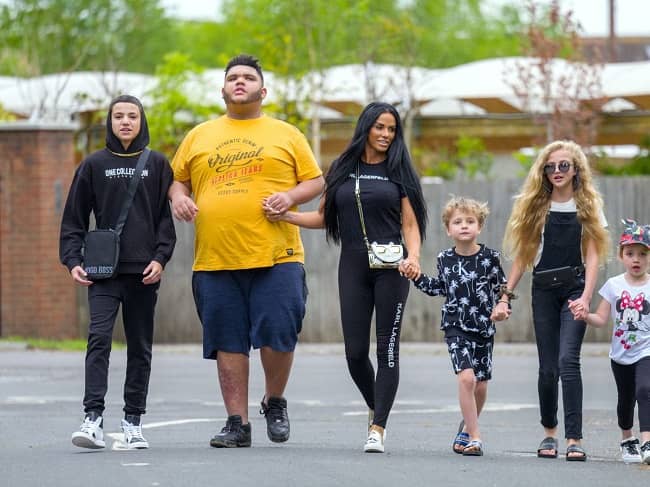 Caption: Katie Price ventures out with all five of her children (Source: Daily Mail)

She and Peter Andre met on I’m a Celebrity…Get Me Out of Here! and got together after spending time. The duo married in September 2005 at Highclere Castle, Hampshire. In June 2005, she gave birth to her second son, Junior Savva Andreas by Caesarean section. And she gave birth to her third child, daughter Princess Tiaamii Crystal Esther in June 2007 with her then-husband, Peter Andre.

In April 2009, she suffered a miscarriage when 10-weeks into pregnancy. Similarly, in May of 2009, Price and Peter announced that they were separating and divorced in September 2009.

In July 2009, she started dating MMA fighter and actor Alex Reid. The couple married on February 2, 2010, in a private ceremony at the chapel in the Wynn Hotel in Las Vegas. Later, they also formally had their union blessed in a church in the UK. Their wedding ceremony was filmed for a TV series. In January 2011, they separated and divorced in March 2012, on the grounds of unreasonable behavior.

On January 16, 2013, she again married her third husband Kieran Hayler at the Sandals Royal Bahamian Resort and Spa in the Bahamas. Hayler proposed Price on Christmas Day 2012. They had their wedding blessing in Weston-Super-Mare in March of 2013.

In May 2014, she accused Hayler of having an extramarital affair and stated about her divorce proceedings. Later, they reunited on the condition that Hayler attends therapy for sex addiction and resumed their wedding vows in Long Furlong, West Sussex in February 2015. 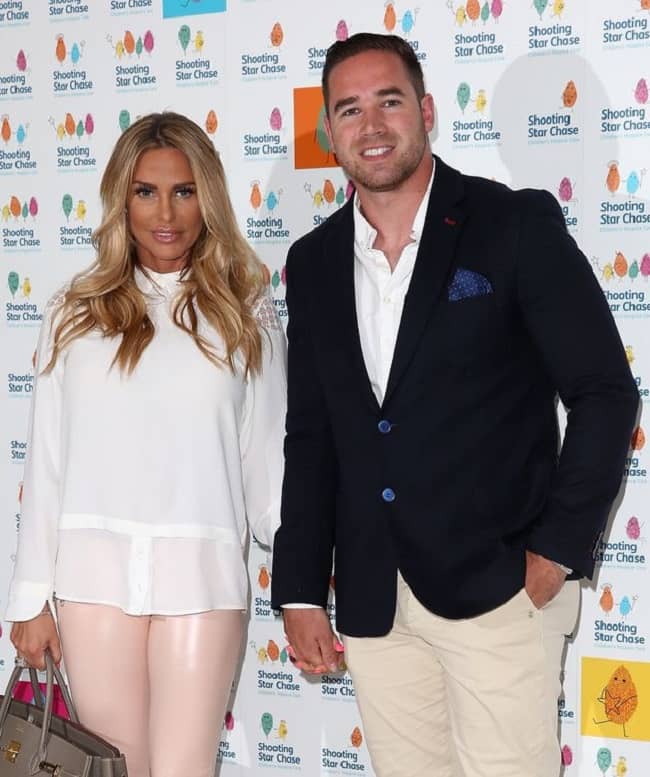 Katie Price is 42 years old. Her birth name is Katrina Amy Alexandra Alexis Infield. She was born on May 22, 1978, in Brighton, East Sussex, in southeast England. Likewise, her mother’s name is Amy, and her father’s name is Ray Infield. She is the single kid of her parents.

At the age of four, her father left the family and in 1988 her mother married builder Paul Price, after which she obtained the surname Price. Similarly, she has an older half-brother named Daniel and a younger half-sister named Sophie. Though her maternal grandmother was Jewish, she is not religious.

Moving toward her educational background, Price attended Blatchington Mill School. She outdid at sport, swimming for Sussex in regional competitions. As a kid, she also developed a passion for horses and horse-riding. She started modeling as a child, and at 13 she modeled for a clothing line. Later, she changed her name to Katie Price at the age of 17. 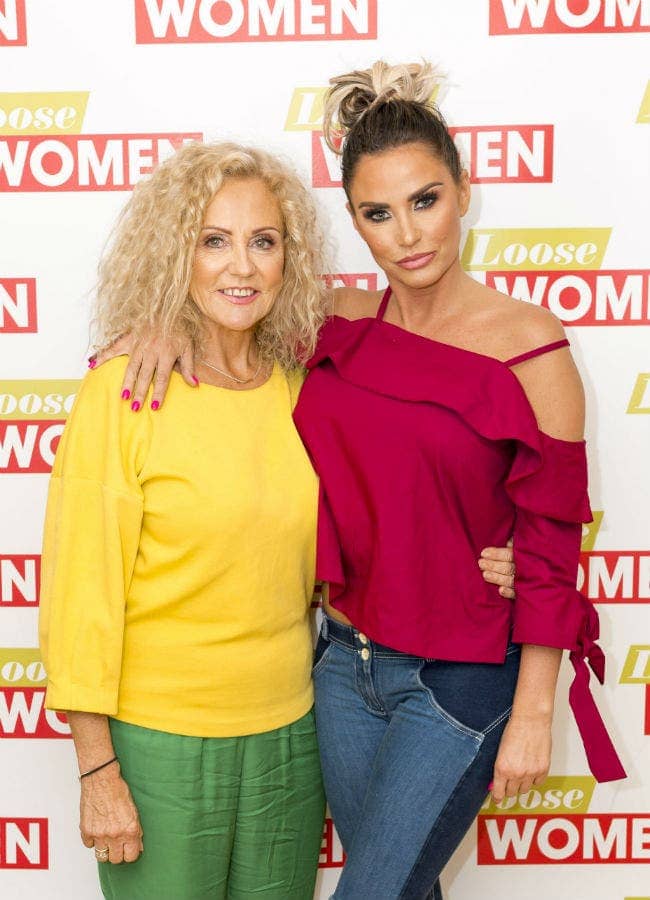 Caption: Katie Price posing for a photo with her mother attending an event (Source: EVOKE)

Price dropped out her school in 1994 and decided to pursue a modeling career. At the age of 16, Price’s friend suggested she have some photographs done. To her astonishment, the London agency to which she sent them loved them and signed her up.

The agency developed her with the stage name Jordan and soon began appearing in The Sun and men’s lifestyle magazines, becoming one of Britain’s best-known models.

As Jordan, she gained famed for her surgically-enhanced breasts. At the age of 19, she had the first in a succession of breast-enhancement surgeries, enhancing her natural 32B to a 32FF.

During that time, Price ven regularly appeared in the Daily Star, FHM, the British edition of Playboy, Nuts, Maxim, Loaded, Vogue and Esquire.

In 2001, her growing popularity led her to attain in the UK general election. Her amusing campaign, in which she pledged more nudist beaches and a parking ticket ban, ultimately won her 718 votes.

Moving toward her television appearance, Price made cameo appearances as herself in the television dramas Dream Team and Footballers’ Wives in 2004. In the same year, she also appeared on Top Gear’s “Star in a Reasonably Priced Car”, completing the lap in one minute and fifty-two seconds.

Beginning in her career, she made an appearance on The Big Breakfast, and she appeared as a guest host on the first series of The Friday Night Project. In December 2005, she published an exercise fitness DVD, The Jordan Workout, featuring “The Juice Master” Jason Vale.

Likewise, she also participated in the third series of I’m a Celebrity…Get Me Out of Here!, a reality television series. In this show, a group of celebrities lives together in a jungle environment with few luxuries, between the months of January and February in 2004. During the show, she met Peter Andre. Eventually with whom she marry and later divorce.

In 2007, Price hosted the short-lived late-night chat show Katie & Peter: Unleashed with then-partner Andre. In November 2009, she made a return visit to I’m a Celebrity… Get Me Out of Here! for the ninth series.

Moreover, she has been subject to different documentaries. She appeared in  Jordan: The Truth About Me (2002), Jordan: The Model Mum and Jordan: You Don’t Even Know Me (both 2004), and Jordan Gets Even on Five in 2004. Later, she made an appearance in the documentary Jordan: Living With a Dream (Channel 4) and then launched the Katie & Peter franchise on ITV2. 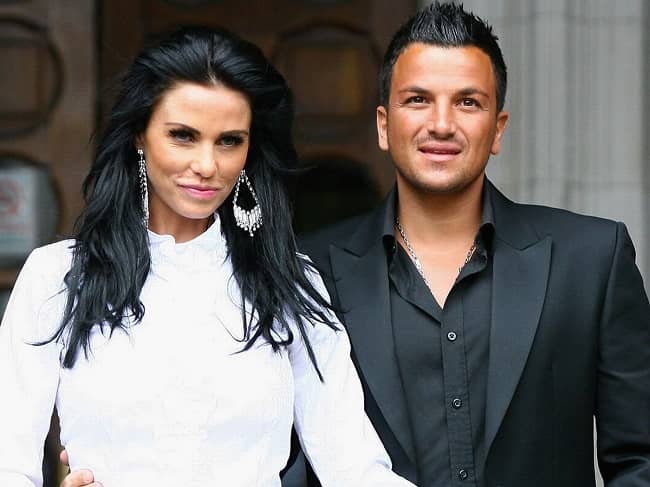 Their separation in 2009 happened in their individual shows being recorded: What Katie Did Next continued on ITV2 until 2011. In addition to this, she danced with her then-boyfriend Leandro Penna on the Argentine television program Bailando por un Sueño 2012, a spin-off of Strictly Come Dancing.

In 2015, she participated in the British television reality game show ‘Celebrity Big Brother’ and went on to win the show on 6 February 2015.

Rising with her first autobiography, ‘Being Jordan’, in 2004, she wrote three more, namely, ‘A Whole New World’, ‘Pushed to the Limit’ and ‘You Only Live Once’ and published them at the interval of two years each.

Between 2006 and 2010, Price wrote ghostwritten novels published, such as ‘Angel’, ‘Angel Uncovered,’ ‘Crystal’, ‘Sapphire,’ ‘Paradise.’ In 2014, she published her tenth novel, Make My Wish Come True.

In 2006, Price launched The Katie Price Lingerie Collection in conjunction with Panache. In 2007 she launched her first perfume, “Stunning”. Her perfumes, Stunning, Besotted Precious Love, and Jordan hair care electrical range, are quite popular.

In 2008, she signed a contract with Derby House to originate her equestrian range of clothing named ‘KP Equestrian’. In 2009 she became the patron of a charity polo match played near Epping, Essex.

On September 1, 2017, she went for her first UK tour with An audience with her. It includes 15 shows beginning in Preston and finishing in Southend on 16 December 2017.

Speaking on English media personality, model, businesswoman, author, and singer Katie Price’s earnings, her estimated net worth is around £45 million at the peak of her career.

Price made her fortune through glamour modeling and performing on shows such as I’m A Celebrity… Get Me Out Of Here! and Celebrity Big Brother. She also became a panelist on Loose Women and has starred in her own reality shows with ex Peter Andre and on her own – most recently My Crazy Life.

In addition to this, TV personality still receives sales from her novels and children’s books, as well as several social media endorsements and public appearances.

In December of 2019, she was announced bankrupt. Likewise, her debts were listed as calculating more than £3.5 million. £2 million existing owed in legal expenses and £1million of debt reporting to a working farm. In August of 2018, she had a bankruptcy hearing at the High Court hearing which was suspended to give her three months to pay off her debts through an Individual Voluntary Arrangement.

Within her involvement in the entertainment industry, Katie Price has been part of several controversies as well as scandals regarding her personal as well as professional life.

In September 2009, she claimed that she had earlier been raped by a “famous celebrity”, but had not reported the incident. She insisted that she would “absolutely never” expose who the attacker was. Surrey Police said that they had not communicated Price: “No allegation of rape has been made and Miss Price will not be making a statement to police”.

Likewise, in October 2003, she got charges of speeding and dropped against her when police failed to arrest her for the offense in the legal time limit of 12 weeks.

In December of 2010, Price got banned from driving for the six months by Crawley Magistrates court for amassing 13 points on her driving license after being given an extra three points on her license for speeding in Pyecombe, West Sussex in December 2009.

In August 2003, she got arrested following an incident in July 2003 for an alleged assault at a nightclub in Birmingham. However, the police did not take further action into the incident.

In February 2019, she admitted having used cocaine for nearly six months as a result of stresses in 2018 through interviews. She even said that she had voluntarily started treatment for addiction at The Priory Hospital.