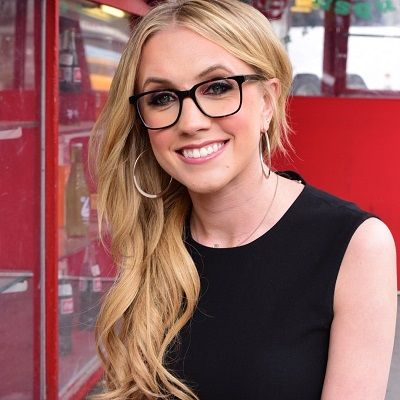 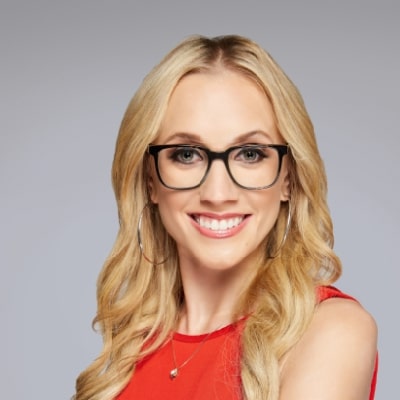 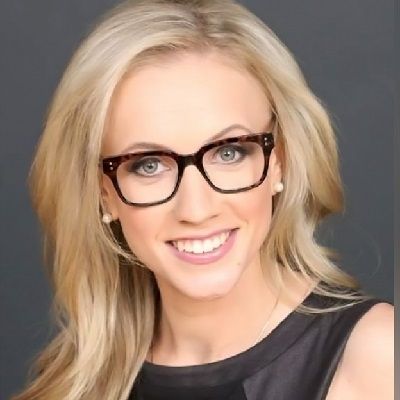 Katherine Timpf is an American columnist and TV personality. Katherine Timpf has also worked as a reporter and a comedian. She frequently appeared on “The Greg Gutfeld Show” and other Fox News shows. Then in 2017, she co-hosted Fox News Specialists alongside Eric Bolling and Eboni Williams, and since 2019, she hosts her own show titled “Sincerely, Kat”.

Katherine Timpf was born on October 29, 1988, and her current age is 33 years. Her full name is Katherine Clare “Kat” Timpf and her zodiac sign is Scorpio. Moreover, her parents are her father Daniel Timpf, and her mother Anne Marie Timpf.

Sadly, as per her Instagram post, Kat’s mother has passed away and she also shares her father’s photos on her Instagram account occasionally. She also has two siblings, sister Julia Timpf and brother Elliott Timpf.

Additionally, Kat owns two pets, a dog named Carl and a cat named Cheens. She added her dog Carl to her family very recently on March 26, 2020. 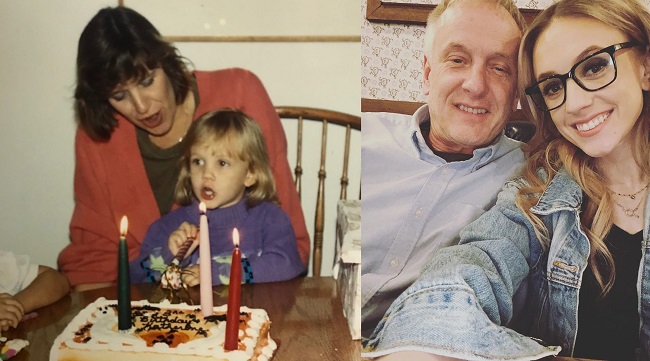 Caption: Katherine Timpf’s childhood photo with her deceased mother and one with her father at present. Source: Instagram

Moving on, her net worth estimation is around $1.5 million and her annual salary is approximately $51000 as of April 2020. She primarily earns by being a journalist, editor, comedian, and host of many TV shows.

Talking about the columnist’s romantic affairs, there hasn’t been any confirmed relationships. She has stayed away from rumors and scandals and hence kept her profile clean. Also, she hasn’t shared concrete information regarding her love life.

But Katherine doesn’t mention her relationship with the guy. We can only make assumptions that the duo might be in a romantic relationship or maybe they are relatives or friends. 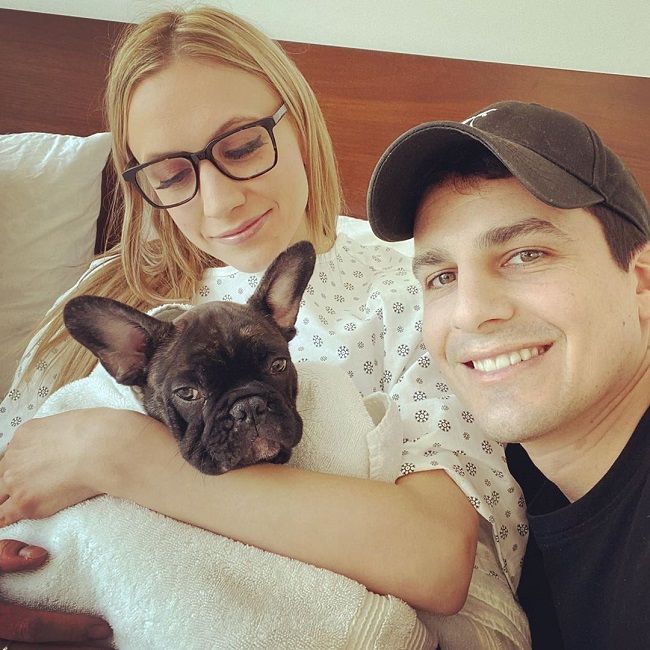 Caption: Katherine Timpf and Cameron taking a selfie on the day her dog Carl joined her family. Source: Instagram

Professionally, Katherine is a columnist, television personality, reporter, and comedian. She frequently appeared on Fox News Channel’s The Greg Gutfeld Show and other Fox News shows.

Then in 2017, she co-hosted Fox News Specialists along with Eric Bolling and Eboni Williams. As of June 2019, Kat also hosts the Fox Nation show Sincerely, Kat.

More precisely, she has appeared on numerous television and radio programs.

Moreover, she also worked for the Leadership Institute’s CampusReform.org in Arlington, Virginia.

Then she worked as a digital editor for The Washington Times. Kat also worked as the news anchor for NASA’s Third Rock Radio as well as a producer and reporter for Total Traffic Network in Santa Ana, California.

Additionally, she received the 2012 Robert Novak Journalism Fellowship Program grant award through The Fund for American Studies. She then completed a project titled, “As California Goes, So Goes the Nation: The Consequences of Following Golden State Policy.”

She has been a contributor to Orange County Register, Investor’s Business Daily, and The Washington Times. Her additional professional also includes being a comedy character on the morning drive radio show on Baltimore’s 98 Rock.

In addition to Kat’s contribution at Fox News, she also wrote columns and satire pieces at National Review Online. Then in November 2015, she said that she received death threats after making satirical remarks about the Star Wars fandom.

Likewise, in 2016 and 2017 she contributed to the Barstool Sports website. She also hosted a weekly podcast called The Kat Timpf Show. In this show, she talks to a guest about random subjects which also includes her personal life. 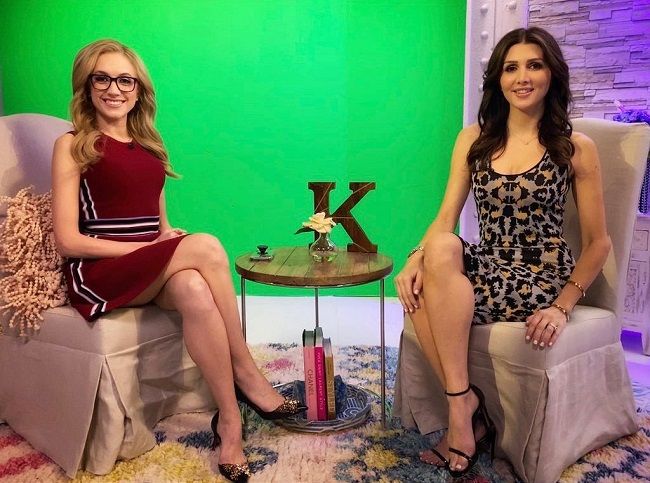 Caption: Katherine Timpf and her guest for the episode, Erin Elmore, on her show “Sincerely, Kat”. Source: Instagram

On May 1, 2017, she became a co-host for Fox News Channel’s afternoon show Fox News Specialists. For this, she worked alongside co-hosts Eric Bolling and Eboni Williams.

However, they canceled the show on 8 September 2017 after the network fired Eric Bolling for alleged sexual misconduct.

Then on 2 December 2018, National Review publicly retracted her column and stated that the column “left out relevant details” of the case. More precisely, it was a Title IX sexual harassment case that involved students at the University of Missouri.

Talking in detail about this particular case, her story implied that a female student had complained about unwanted advances due to the fact that the alleged harasser was larger than she was.

However, as per National Review, deposition in the case revealed that the alleged harasser “had made repeated, unwelcome advances toward the female student and was found in violation of Title IX for stalking her”.

She also co-hosts the weekly Fox News Radio podcast titled Tyrus and Timpf. For this, she worked with professional wrestler Tyrus. As of June 2019, Kat is the host of her own show on Fox Nation.

Its title is “Sincerely, Kat” and on this show, she answers questions submitted by fans. Furthermore, Kat was also a keynote speaker at the 2019 YALCON in Silicon Valley.

As a comedian, she has also performed stand-up comedy in several comedy venues throughout America. Some of such venues are The Improv, situated in Los Angeles, and the Gotham Comedy Club, situated in New York.

Moreover, Kat’s popularity increased immensely in 2015 after she appeared in The Greg Gutfeld Show. It is an American comedy and politics show hosted by Greg Gutfeld. Greg is a popular American TV personality and author.

Then in December 2015, Kat gained attention after she accused the Democratic presidential candidate Hillary Clinton of being a “fake feminist”. It was mainly because of Clinton’s attitude towards the woman who had accused her husband of sexual misconduct.

Katherine is available on multiple social media platforms. She created her Twitter account in July 2010 and so far has 443.6K followers. Similarly, she joined Youtube on 22 December 2006 and as of April 2020 has garnered 128,891 views and 2.41 subscribers.

She stands at a height of 1.69 meters or 5 feet 7 inches and her weight is around 54 kg. Similarly, her chest-waist-hip body measurements are 34-24-35 inches respectively. Other than that, her eye color is hazel green whereas her hair color is blonde.