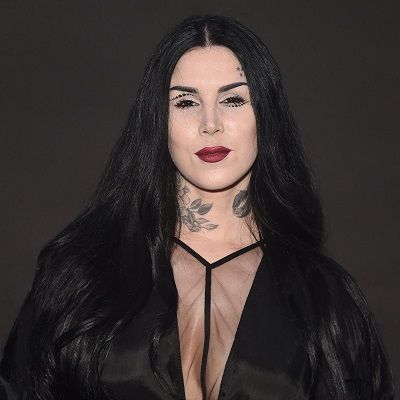 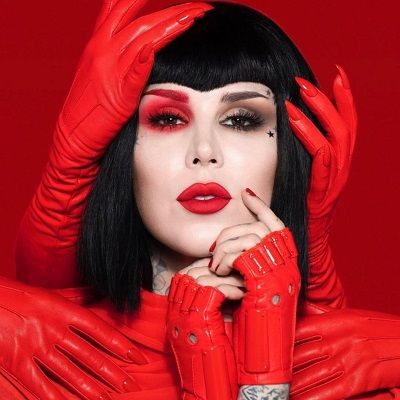 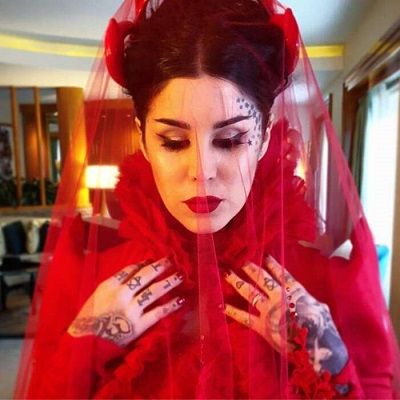 Kat Von D is a Mexican-American tattoo artist, model, musician, author, entrepreneur, as well as a television personality. Kat Von D is famous for her work as a tattoo artist on the TLC reality television show LA Ink, which premiered in the United States on August 7, 2007, and ran for four seasons.

Being influenced by punk rock bands to such an extent, she spent most of her time listening to Misfits and Ramones, at the tender age of 12. Likewise, her artistic craft soon came out when she picked up a tattoo machine and created a Misfits skull on her friend.

Furthermore, she holds Mexican-American nationality and mixed ethnicity of German- Spanish- Italian. Talking about Kat’s education history, she left school at the age of 16 to work as a tattoo artist and was employed at a local professional shop, Sin City Tattoo, in 1998.

Likewise, she credits her grandmother, Clara von Drachenberg, as an inspiration for her in music and art, and the Latino culture of Los Angeles which is a major influence on her tattoo art and style. She made her first tattoo at the age of 14 and also quit school at 16 to become a tattoo artist. 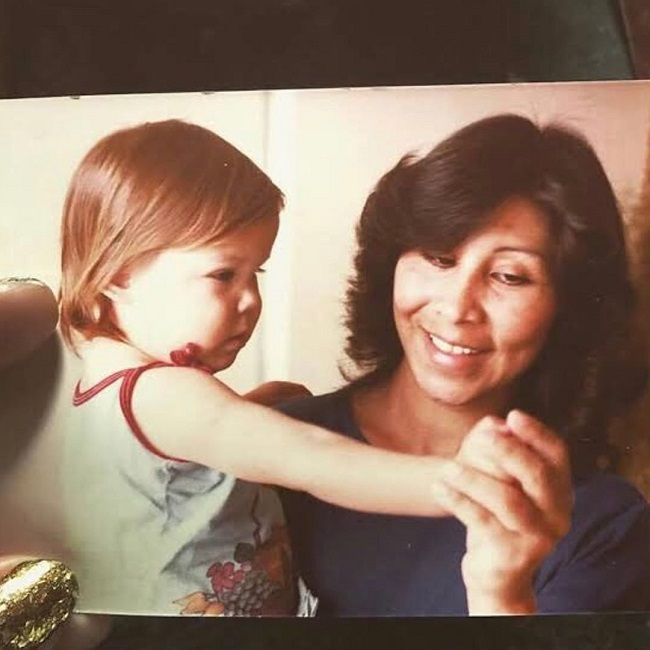 Caption: A childhood photo with her mother. Source: Instagram

Reflecting on her professional life, she worked for many shops such as Blue Bird Tattoo and Inflictions, gaining experience and polishing her talent. Then she landed at True Tattoo, where she worked with Tim Hendricks, Clay Decker, and Chris Garver, who recommended her to try her luck at ‘Miami Ink’.

Moreover, she also worked for two seasons on ‘Miami Ink’, a reality television series on the TLC network. Though her differences with owner Ami James forced her to leave her job. Then she returned to Los Angeles and opened her shop, High Voltage Tattoo, in Hollywood, California, in 2007. This helped her to telecast her reality series ‘LA Ink’ on TLC, which features tattoo stories of various clients.

On the show, she also recorded herself in the Guinness World Record of most tattoos given by a single person in 24 hours, with a total of 400. Likewise, in December 2007, the Von D-designed logo for the city of Los Angeles proceeds went to the children’s-blindness charity Vitamin Angels. However, her record was consequently cracked by her ex-husband, Oliver Peck on June 13, 2008. Her reality show LA Ink ran four seasons, ending September 15, 2011; TLC disclosed the cancellation on August 18, 2011. Von D has publicly said that the cancellation was because she determined not to continue doing the show.

She is the founder of the MusInk Tattoo Convention and Music Festival, which started in 2008. This convention is an all-ages Tattoo, Music, as well as Art festival situated in Southern California.

Moreover, she released her first book High voltage Tattoo in 2009 with a compilation of tattoos and artwork. She also wrote her second book ‘The Tattoo Chronicles’ in October 2010 and was listed at #3 in The New York Times ‘Hardcover Advice & Misc’ best-sellers. Further.

Furthermore, her constant verbal clashes with the owner led to her termination. His series ‘LA Ink’ became one of the highest-rated programs on the TLC channel, handling distinguished celebrity clientele, including actor Stephen Baldwin, comedienne Margaret Cho, and rocker Dave Navarro. 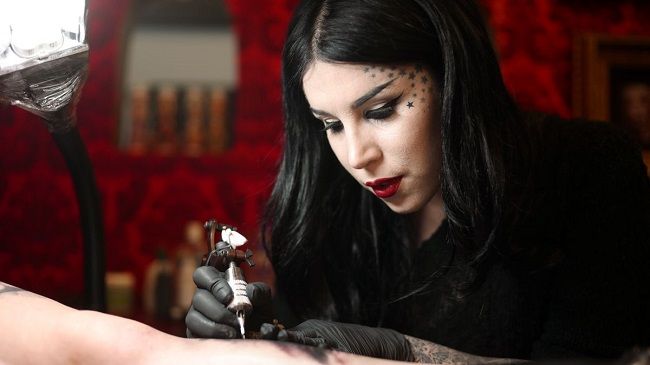 Besides that, she has also sung female vocals to the song “Rosary Blue” on X. It is a 2012 studio album by the Finnish Gothic Rock band The 69 Eyes. In August 2013, she stated on her social media handle Twitter that Dave Grohl and producer Danny Lohner had completed two tracks of an album she had talked about recording as early as 2011.

On September 2, 2010, she opened the art gallery and boutique Wonderland Gallery in the space next door to High Voltage Tattoo. She also launched her clothing lines KVD Los Angeles and Kat Von D, Los Angeles, in the US and Canada in the fall of 2011. Later it expanded internationally the following year. In 2008, she started her makeup line, Kat Von D. Since then, she has gained the largest fan following on social media of any beauty brand.

In addition, she created her own cosmetics line Kat von D for Sephora followed by launching an art gallery and boutique Wonderland Gallery. Von D even started her own clothing line KVD in LA.

She has acted in a few movies, which include ‘Bam Margera Presents: Where the Fuck Is Santa?’ (2008) and ‘The Bleeding’ (2009). Her celebrity clients for tattooing include Sebastian Bach, Eric Balfour, Ryan Dunn, Jenna Jameson, Nicole Richie, Travis Barker, Green Day, Mira Sorvino, and Ville Valo among others.

Kat has earned a decent sum of money in her profession, her estimated net worth is around $10 million, and has earned up to $1 million. She also endorses her brand by the name of Kat Von D which represents: A makeup line launched in 2008 for Sephora cosmetic store, which is against animal testing and contains no animal-related by-products.

Kat Von D is a married woman. She got married to Oliver Peck, who is a widely traveled tattoo artist. He is talented as Kat is considered to be, and had a rocky marriage due to Kat’s alcoholism, self-centered behavior, and body image issues. However, they split in August 2007.

Talking about her past relationship, she has dated American musician, producer, and director, Alex Orbison for about a year. He was often seen on her LA Ink reality show when the two were dating. She is extremely fond of Scandinavian bands and spends a lot of time with musicians which led her to date Finnish musician, Ville Valo. Likewise, she has publicly been in relation with Nikki Sixx. He is co-founder of Motley Crue ban. But they broke up with each other soon after.

Further, she engaged Jesse James in January 2011. However, they split from each other. Also, she engaged with the Canadian DJ and Music Producer, Deadmau5 but they unexpectedly called off their engagement in November 2012.

After that Kat started dating a Hollywood stuntman, Steve-O. He is most famous for his crude comic reality stunt series and film series, Jackass. However, they ended up their relationship in March 2016.

Then in the following year, she dated artist, author, and musician, Rafael Reyes. He wrote another song, especially for her and she contributed her vocals to that song also. They finally married in February 2018. Later, they have 1 child, a son Leafar Von D Reyes (b. December 2018). 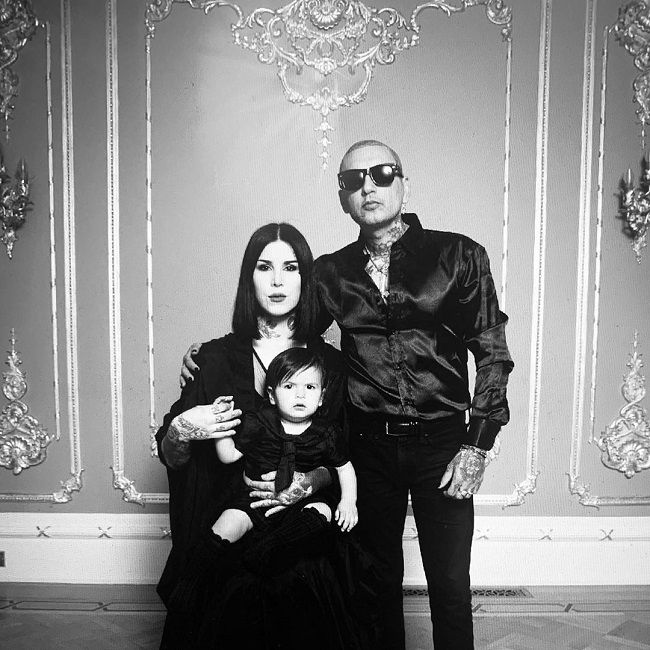 There was a rumor that Kate is an anti-vaxxer or anti-Semitic. Currently, she is far from the rumors and controversies regarding her personal and professional life.

Kat has an amazing personality and a stunning body. She has a height of 5 feet 9 inches and weighs around 62Kg. In addition, she has a body measurement of 35-27-36 inches. Her dress size is 6 (US) and her shoe size is 9 (US). Furthermore, she has a light Ginger Brown hair color, and her eye color is dark brown.