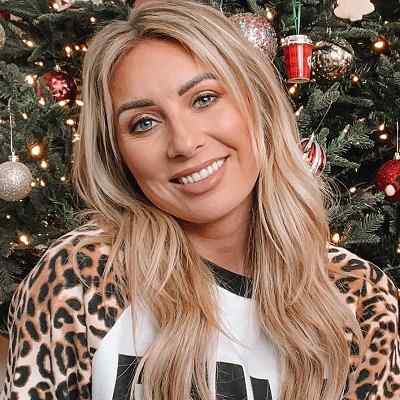 Kassie Johnson age is 35 years old as of 2022. She was born to American parents on March 2, 1987, in Alaska, the United States under the birth sign Pisces. Currently, she is named Kassie Thatcher after her marriage. Her mother’s name is Nelda Johnson but has not mentioned his father’s name. However, she keeps on posting family pictures on his Instagram handles.  He has a brother named Chris Overton. When she was 16 years old, she fell in love with MAC cosmetics growing up in Alaska.

Likewise, he belongs to the American nationality but has not mentioned her ethnic background. Moving toward her educational background, she attended Shasta High School and graduated Bachelor’s degree in Small Business Entrepreneurship from Chico State University.

Speaking up on Kassie Johnson’s earnings, she is a rising social media personality who has earned a quite considerable sum of money from her work. She is living a good lifestyle along with her husband and kids with good fortune. Unfortunately, she has not mentioned her exact net worth as well as earnings.

One of her most-watched videos is “AMAZON FAVORITES | CLOTHING, ACCESSORIES, HOME ITEMS & MAKEUP” with more than 108k views posted on November 7, 2019. Some of her notable videos are “TOP 10 MAC NUDE LIPSTICKS” “HIGHLIGHT DECLUTTER,” “THE BEST FOUNDATION EVER,” “Wedding Video | Ted + Kassie,” and many more which are worth watching. She gives reviews about makeup products honestly which makes followers easy to choose which product to use. Further, she is growing with her more interesting and useful videos posted on Youtube. Likewise, she has also created an Instagram account where she posts her daily lifestyle along with her family and friends where she has gained more fan followers as well. Further, she has also collaborated with other fellow YouTubers and mentioned pictures on social media handles like Hailey K, and Shaylee Glaziner who are also rising Make-up artists on Youtube.

She also makes her earnings through brand endorsements. Some of the bands she has endorsed are Ana Luisa jewelry, Target Style, HollisterCo, Venus, and many more.

What is the relationship status of Kassie Thatcher? Who is her husband?

Reflecting on Kassie Johnson’s relationship status, she is a married woman. She exchanged vows and got married to Ted on May 14, 2017. She has a son named Ethan Kruz from her previous marriage. Her son also has an Instagram account who also wants to launch his Youtube channel. However, she has not mentioned her previous husband.

Likewise, she got married for a second time to her perfect match who accept her as well as a son. She is currently living a very happy life along with her husband. The duo feels blessed to have each other in life. Similarly, they also welcomed a baby girl named Olivia Brighton Thatcher on January 3, 2019. Furthermore, Kassie has not been involved in any kind of controversial acts and maintained a clean profile. Bold and beautiful Kassie Thatcher has an amazing personality with a fit body physique. She has good height with a healthy body weight but has not mentioned her exact height, weight, and body statics. Likewise, she has a pair of green eyes with blonde hair color.