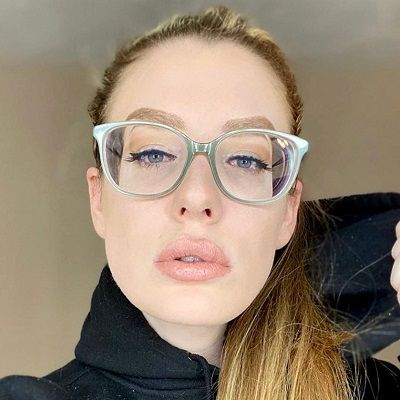 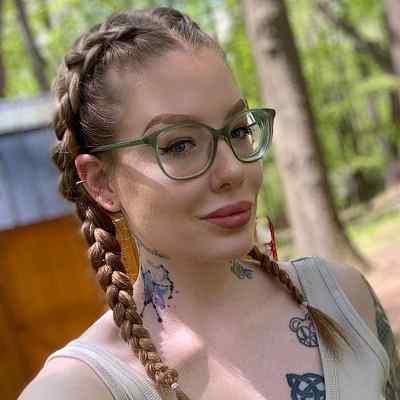 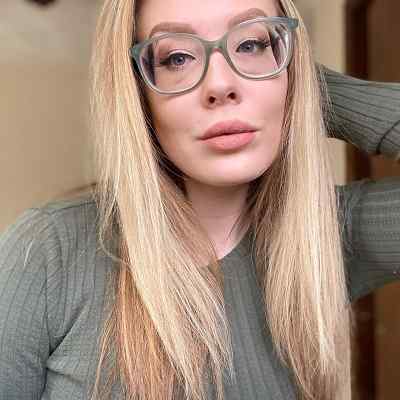 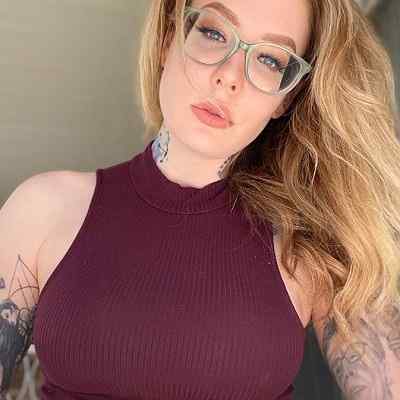 Karuna Satori is an American social media star. Karuna Satori is primarily a Youtube personality famous as an ASMR artist. She is very open about her past as an addict and her journey to get clean. Likewise, she has also shared on multiple platforms that ASMR videos or whispering therapy helped her immensely to get clean when she was struggling to do so.

Karuna Satori was born on June 25, 1991, and her age is currently 31 years old. She was born in her birthplace, Johnstown, Pennsylvania, and her birth name are Sarah Toth.

Further, she has not shared details about her parents, sibling, and other family information. But she has mentioned that her father passed away suddenly on April 27, 2014, and her mother was abusive.

Also, she has yet to share any information regarding her educational background.

Moreover, she has shared the meanings behind her name on her Youtube description. “Karuna” refers to the universal compassion of a Bodhisattva whereas “Satori” means sudden enlightenment. 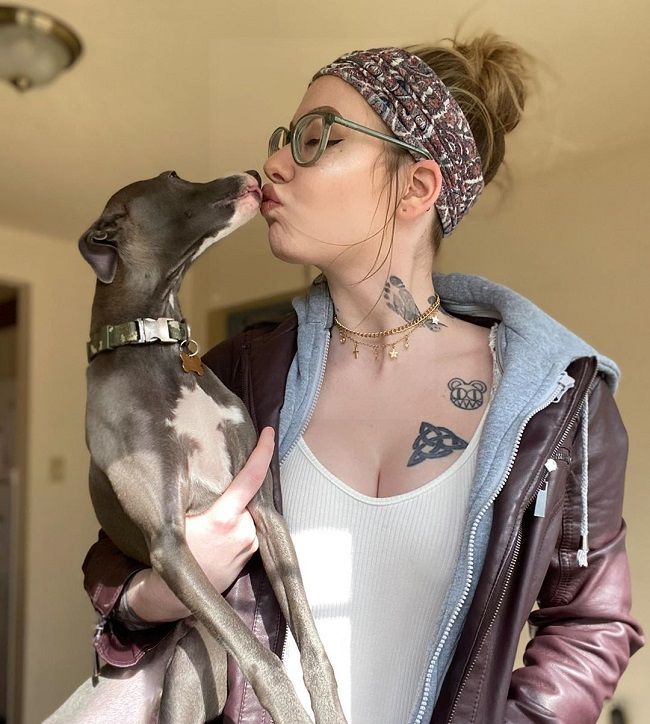 Caption: Karuna Satori posing for a photo with her pet dog. Source: Instagram

Talking about her social media presence, Karuna Satori goes by @karunaasmrtist on Twitter and @karunaasmr on Snapchat.

Likewise, she has shared 18 posts and has also earned 46.1k followers on her @_karunasatoriasmr Instagram handle.

She also has two Youtube channels. One of them is “Karuna Satori ASMR” and this channel has over 1.22 million subscribers.

For fan mails, we can reach her at Sarah Dishong, P.O Box 151, Windber PA, 15963, whereas, for sponsorships, collaborations, and commissions only, we can contact her at [email protected] and [email protected]

Karuna has earned a decent amount of money throughout his career as a YouTuber. Likewise, she has a net worth of $0.9 million as of 2022.

Professionally, Karuna Satori is a social media personality. She is primarily a Youtube star popular as an ASMRtist. Her tingle-inducing videos have earned her over 1.05 million subscribers.

Moreover, she launched her KarunaSatori ASMR channel on 5 October 2013 and so far has earned over 304.9 million views. She also has a secondary channel called Karuna Satori BASIC.

This channel features her vlogs and life stories. She and Kayla Suzette are both members of the ASMR community on the video-sharing platform, YouTube.

She welcomes her viewers and shares with the new viewers that her channel is a family channel which is an extremely safe place, where they only allow love and compassion. There is room for opinion, but nobody digs or tolerates hate.

She created her ASMR channel on 5 October 2013 and so far has over 1.05 million subscribers. Likewise, this channel has 304,909,745 views at the time of writing this biography.

The oldest video on this channel is titled GEORGE ENTITLED (G4T) GEORGE HEMMINGER which she uploaded on 25 March 2014 and so far has 45,736 views.

Moreover, the video with the highest number of views is ASMR Mommy Cleans Your Ears RP with over 6.1 million views.

She also has a separate channel for vlogs. It is called “Karuna Satori BASIC” and this channel has 86.2K subscribers and 2,490,166 views. Further, she created this channel on 14 April 2017.

The oldest video on this channel is titled B A S I C. This video has earned 28,225 views since its upload on 15 April 2017. Further, the video with the highest views is titled Quitting The Darker Side Of ASMR.

Moreover, the videos with over 120k views on this channel are I Adopted A Cheetah Cub ?, My Childhood & Adult Sexual Abuse Story | ⚠️EXTREME TRIGGER WARNING⚠️, the first and LAST time I ever do a reborn doll unboxing.

Some other videos are Botched Lip Surgery Story Time | Blair Plastic Surgery with over 244k, 200k, 188k, and 187k consecutively.

Experience as an addict and journey to recovery

Karuna Satori was only 15 years old when she tried Percocet. It is a powerful painkiller that includes oxycodone.

Karun liked the numb high and kept doing it. She then went on to dab with LSD, shrooms, ecstasy, and heroin.

On her 17th birthday, she tried snorting a now-banned form of OxyContin. It is one of the strongest opioids on the market made of pure oxycodone.

Then the next two years were a blur and when she was 19 years old, she was desperate to get clean. However, she was so hooked that she couldn’t sleep if she didn’t take a hit.

Later, she started taking methadone as it was the government’s recommended replacement therapy for recovering addicts.

Sadly, it was “liquid handcuffs” that kept her craving. She’s taken methadone every single day for seven years.

In the year 2012, she came across whispering therapy on YouTube at the age of 20 years.

At the age of 26 years, Satori was clean and started her own ASMR channel that saved her life. She earns enough in advertising to support her husband and two children. 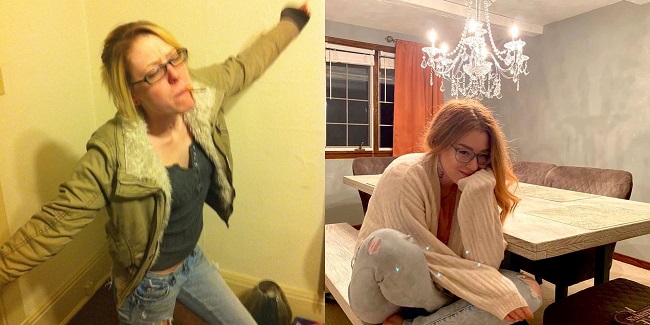 Caption: (L) Karuna Satori a decade ago when she was high on the drug OxyContin and (R) Karuna Satori sitting in the new home that she purchased by herself. Source: Instagram

ASMR was a breakthrough for her when she wanted to get clean. Watching these videos helped her fall asleep before she started craving another line of Oxycontin.

Moreover, the impact of these ASMR videos was so powerful that she claims it was the key to getting clean.

These videos helped her regain her self-esteem alongside soothing her dependence on drugs. She shared on Daily Mail:

“As an addict, I felt worthless. When I started making videos, the praise I got from people in my family and everyone.”

In 2015 she hit a rough patch when the social services took her children after her father died. The kids were frequently left with her mother-in-law because her husband was working 12-hour days.

Then one day she hit her husband and the cops were called. This was their first and last physical altercation as per her interview with Daily Mail.

Although a judge said she would never get her children back, she was gifted with the exception when she got back her children after two years of separation.

Karuna Satori is a married woman and she is also the mother of two young kids. Her husband’s name is Victor and he is also an ASMRtist.

Victor runs a channel named “Essence of ASMR”. The couple together has kids named Satori and Odin.

Talking about their relationship story, she met Victor when she joined a methadone clinic in early 2011. She was 19 years old back then and a year after joining the clinic, the two met each other. She shared on Daily Mail:

“They say never to get in a relationship with another recovering addict but it actually saved our lives and saved us a lot of pain and heartache for what addicts go through..” 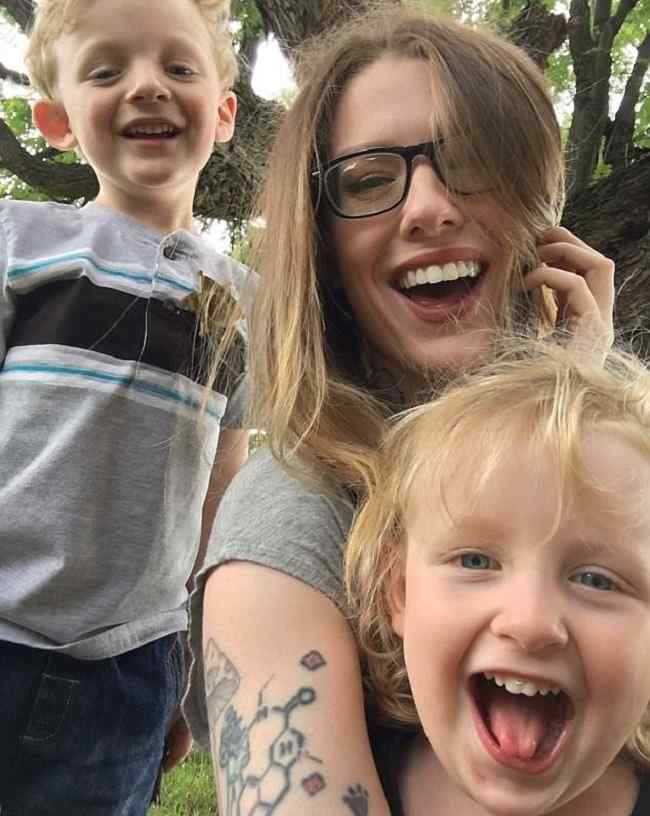 There is no information regarding her body measurement details like height, weight, chest-waist-hip measures, dress size, shoe size, etc.

She has beautiful blue eyes and naturally blonde hair color. Likewise, she has multiple tattoos on various body parts.