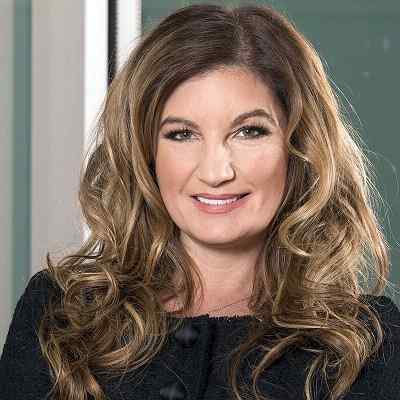 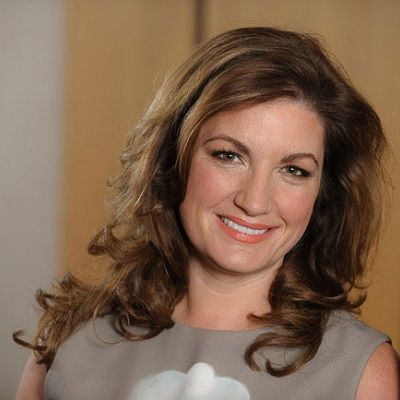 Karren Brady is a British Business and sporting executive, politician, television personality, newspaper columnist, author, as well as a novelist. Karren Brady is a former managing director of Birmingham City FC who became the vice-chairman of West Ham United. Moreover, she was in the BBC One series “The Apprentice” as an aide to Alan Sugar.

Karren Brady was born on April 4, 1969, in her birthplace, Edmonton, London, England. at the moment, Karren’s residence in Knightsbridge, London. Her age is 53 years old and her zodiac sign is Aries. She holds British nationality.

Karren Brady’s mother’s name is Rita who is an Italian. Her Irish father’s name is Terry Brady who had made his fortune in printing and property development. She has an older brother whose name is Darren. 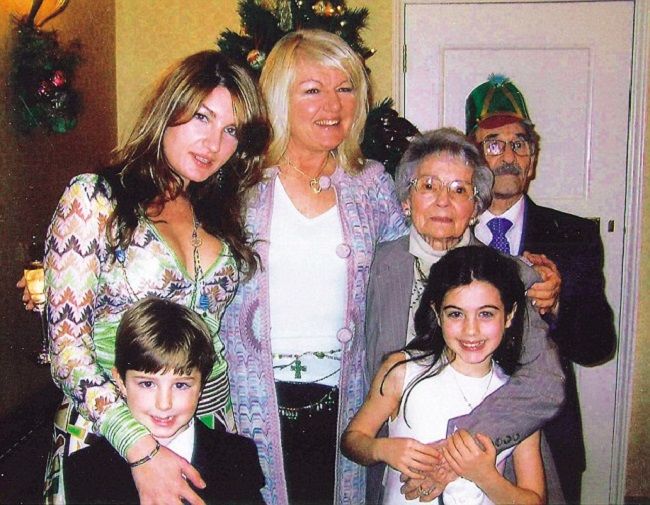 Caption: Karren Brady with her parents, grandmother, and her two children (Source: DailyMail)

Regarding Karren’s educational background and qualifications, she was in Salcombe Preparatory School in Southgate until she was 11 years old. Later, she studied in a boarding school, Poles Convent in Ware, Hertfordshire. And, again in Aldenham School, Elstree, a boy’s school which accepted girls in the sixth form. And it is the place where she gained four A-levels. However, she didn’t attend the University.

She joined ad agency Saatchi & Saatchi at the age of 18 after being rejected from a journalism course.

Karren Brady’s career began as a trainee at the advertising agency “Saatchi & Saatchi”, having been rejected for a place on a journalism course at Harlow College. Then, a year later, on joining the London Broadcasting Company as an advertising account executive, she targeted the advertising business of one of her father’s largest clients publisher, David Sullivan. David is the owner of the Daily Sport and Sunday Sport. Eventually, she was able to impress Sullivan who later gave her a job.

Moreover, Karren was offered a job with Sport Newspapers and became one of its directors when she was 20 years old only. Later, when she was 23 years old, she began to work as managing director of Birmingham City F.C. in March 1993. Sullivan also commented later that he mainly agreed to let her run the club because such a young, female director would attract publicity to the club, and also because Brady was a sacker. However, she even encountered sexism in the role.

Brady along with Sullivan was arrested by City of London Police in 2008, as a part of the investigation into the 2006 allegations of corruption in English football. But they were soon released on bail. The investigation involved similar actions against players and also tax and national insurance offenses relating to two players. However, in 2009, it was confirmed that no further action will be taken. Then later, Sullivan sold the club to Carson Yeung and in the same month, Karren was appointed as a non-executive director to the England 2018 World Cup bid advisory board.

Karren Brady became a Vice-Chairman of West Ham United by new Joint-Chairman David Sullivan and David Gold in 2010. Likewise, Brady was responsible for negotiating a move on behalf of West Ham United from their Boleyn Ground to the Olympic Stadium in Stratford, East London. Initially, the intention was for West Ham to take ownership of the stadium.  But this bid collapsed in October 2011 due to a legal delay caused by a rival bid by Tottenham Hotspur.

Karren Brady oversaw the club’s move from the Boleyn Ground to the Olympic Stadium in 2016. Subsequently renamed London Stadium, the move saw West Ham United increase its seat capacity which was completely sold out before the start of the 2016–17 campaign. It gave the Club the third biggest home attendance in the Premier League.

Moreover, West Ham United was the highest-ranked bidder to become the anchor concessionaire and tenant of the Olympic Stadium in December 2012. Furthermore, Karren is also passionate about business and the promotion of women in this field in the UK.

Moreover, Karren Brady has also been the chairman of Bauer’s Kerrang and had a seat on the board of Sport England. Likewise, she was a non-executive director of Channel 4 television. But she later left the network to take a position at Syco, which is a company whose owners are Simon Cowell and Sony Music Entertainment.

There, she was a key consultant. Karren is also an Ambassador for Barclays Life Skills which aims to offer young people workplace experience. Also, she is the Patron of the Life After Stroke Awards and an Ambassador for Well Being of Women.

Karren is also renowned for championing the cause of women in business. Likewise, she has repeatedly called upon her fellow female professionals to help those trying to make their way in the business world. She was appointed as Commander of the Order of the British Empire (CBE) in the 2014 New Year Honours for services to entrepreneurship and women in business. Furthermore, she appeared as a celebrity contestant on Comic Relief Does The Apprentice.

In 2008, Brady was a guest interviewer in series four of The Apprentice, and in 2009, she was revealed as a new assistant of the show’s owner in the sixth series of the Apprentice. Karren Brady also has an interest in politics. Karren addressed the Conservative Party Conference in Manchester on the subjects of small businesses and supported Osborne’s policies as Chancellor.

She was also appointed the government’s Small Business Ambassador. Moreover, she was involved in a controversial House of Lords vote over proposed cuts to tax credits, voting with the Government in favor of the plan. However, Karren also faced questioning about her role in non-disclosure agreements (NDAs) relating to allegations of misbehavior on the part of the businessman Philip Green.

Furthermore, Karren is also a motivational speaker. She commits her time to mentoring young people, helping other women follow her path to the top, and persuading every business to see the benefits of putting more women on their boards, and also does everything to support other people who are taking their first steps in business.

Moreover, Karren is also into charities. She acts as a Patron and an Ambassador for numerous of Britain’s most important charities in the field of healthcare. Some of them are Wellbeing of Women, Well-child, The Stroke Association, Teenage Cancer Trust, etc. 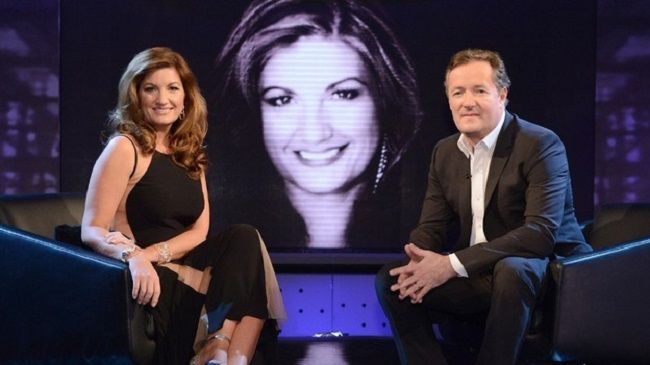 Karren Brady was Cosmopolitan magazine’s Business Woman of the Year. She was the Revitalise Businesswoman of the Year in 2007. Moreover, Karren has won the NatWest Spirit of Everywoman Award for services to women in business. Likewise, she received many awards and many honors. Brady became 10th in The Guardian’s 50 most influential women in British sport, on International Women’s Day, 8 March 2014.

In February 2013 she became one of the 100 most powerful women in the United Kingdom by Woman’s Hour on BBC Radio 4. She has also received a CBE in the 2014 New Year Honours list for her services to entrepreneurship and women in business. Likewise, she was named in Debrett’s top 500 most influential and inspirational people in Britain in January 2014.

Further, Karren was also the Ultimate Entrepreneur. She is also one of the 50 most inspirational people in the world. Karren Brady has a net worth of $85 million sterling at the moment. At such a young age, she became a millionaire and still is.

Karren Brady’s husband is a Canadian footballer. Karren and Paul Peschisolido tied the knot on 10 June 1995. He played for Birmingham City for two seasons. Moreover, the couple was blessed with their first girl child in 1996 and her name is Sophia. They have a second child who is a boy and his name is Paolo. 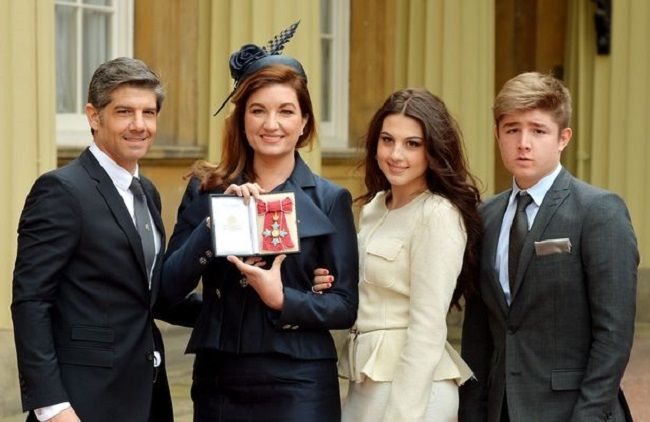 Caption: Karren Brady with her husband and children (Source: Instagram)

In 2006,  she underwent a full-body MRI scan as part of a medical screen, which surprisingly found a potentially fatal cerebral aneurysm. Doctors told her at the time that she had a 30 percent chance of dying from the condition. Fortunately, it was a miracle that she had survived the births of her two children. In February 2006, she encountered urgent neurosurgery to restrict the aneurysm from rupturing. She made a full recovery and moved back to work about one month later.

Karren’s height is 5 feet 9 inches and her weight is 97Kg. Her other body measurements like chest-waist-hip sizes are 35-25-37 inches respectively. Moreover, she has light brown hair and light brown eyes.