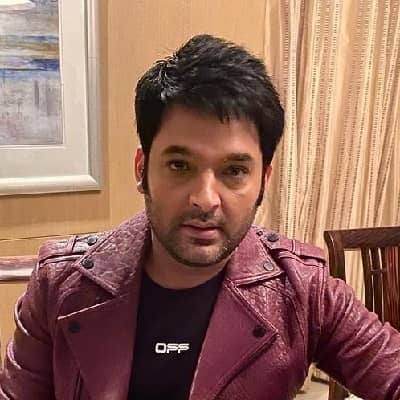 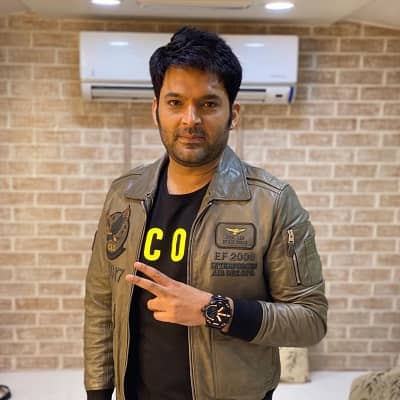 Kapil Sharma’s birthdate is 2nd April 1981 and his birthplace is Amritsar, Punjab, India. The birth name of Kapil is Kapil Punj. Similarly, Kapil Sharma is an Indian citizen and has been following Hinduism. Kapil’s caste is Brahmin and his sun sign is Aries. As of 2021, the age of the stand-up comedian is forty years old. Kapil’s father’s name is Jeetendra Kumar Punj who was a head constable in Punjab Police. On the other side, Kapil’s mother’s name is Janak Rani who is a homemaker. 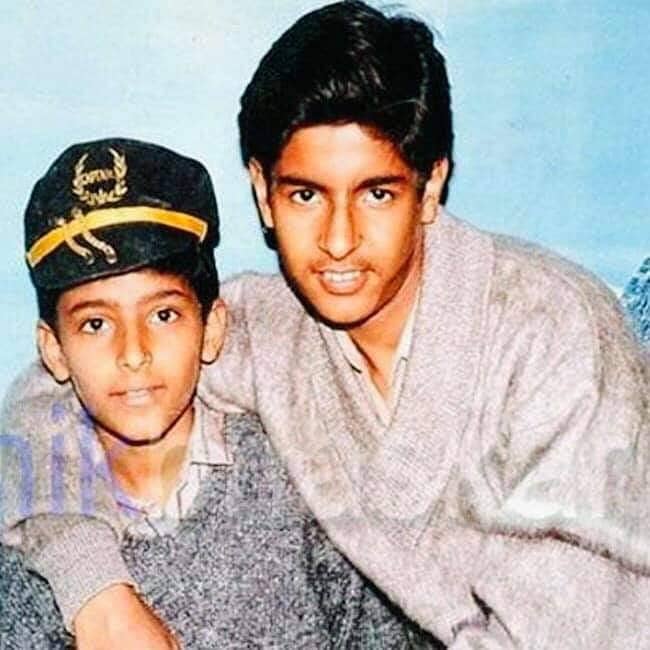 Caption: Kapil Sharma with his brother when they were young (Source: Instagram)

Kapil Sharma’s dad was identified with cancer in the year 1997 and sadly passed away in the year 2004 at AIIMS in Delhi. As for Kapil Sharma’s educational background, he first went to Shri Ram Ashram Senior Secondary School, located in Amristar.

Later, Kapil Sharma joined the Hindu College which is situated in Amritsar. The actor was present in the list of noticeable graduates of Apeejay College of Fine Arts, located in Jalandhar. Kapil even has one brother, Ashok Kumar Sharma who is a Police constable, and even one sister whose name is Pooja Pawan Devgan.

Kapil Sharma got some attention after he became the winner of the comedy reality TV show, “The Great Indian Laughter Challenge” in the year 2007. The actor was also working in the Punjabi show, “Hasde Hasaande Ravo”. Sharma then went to Mumbai to pursue his career as a singer. Kapil took part in Sony’s “Comedy Circus” and turned to be the winner of the 6th season of the show. He was also the host of the dance reality show, “Jhalak Dikhhla Jaa Season 6” and the comedy show, “Chhote Miyan”. In 2008, Kapil was the contestant of “Ustaadon Ka Ustaad”.

Then, the actor brought his private show, “Comedy Nights with Kapil” in 2013. In the same year, Kapil was praised with the Indian of the Year award for his entertainment by the CNN-IBN Indian of the Year awards. At the time of the 2014 Lok Sabha Elections, the Delhi Election Commission hired him as the Brand Ambassador. In 2015, he was the co-host of the 60th Filmfare Awards with Karan Johar. Kapil then was the presenter for the 2014 4th season of Celebrity Cricket League.

Sharma was also present on the first episode of the 8th season of the Indian TV game show, “Kaun Banega Crorepati” as a guest. Kapil was again present as a guest on “The Anupam Kher Show” and in “Koffee With Karan” in 2017. In 2015, he was present as the main role for the first time in Bollywood in the film, “Kis Kisko Pyaar Karoon”. After his show, “Comedy Nights with Kapil” came to an end, he made a deal with Sony television for another show, “The Kapil Sharma Show”. The show’s final episode was publicized on 24th January 2016.

Next, the Indian actor has produced another show on 25th March 2018 with the title, “Family Time With Kapil Sharma”. The show had just three episodes which came to an end on 1st April. In the year 2018, Kapil Sharma created a Punjabi film, “Son of Manjeet Singh”, out on 12th October 2018. “The Kapil Sharma Show” was publicizing with a fresh season on 29th December 2018 whose producer is Salman Khan. In the year 2020, it was declared that he will be starting a children’s comedy show, “The Honey Bunny Show With Kapil Sharma” on Sony Yay.

Apart from Kapil’s appearance in the entertainment industry, he is also popular for being involved in supporting animal rights. Kapil with one of his colleagues was present in a PETA campaign to support the adoption of street cats and dogs. In July 2014, Kapil adopted a homeless retired police dog from Mumbai. Sharma even has campaigned to protect labored elephants over the country. The Indian Prime Minister Narendra Modi gave a nomination spot to him for the “Swachh Bharat Abhiyan”, for which he campaigned and promoted daily on his show. 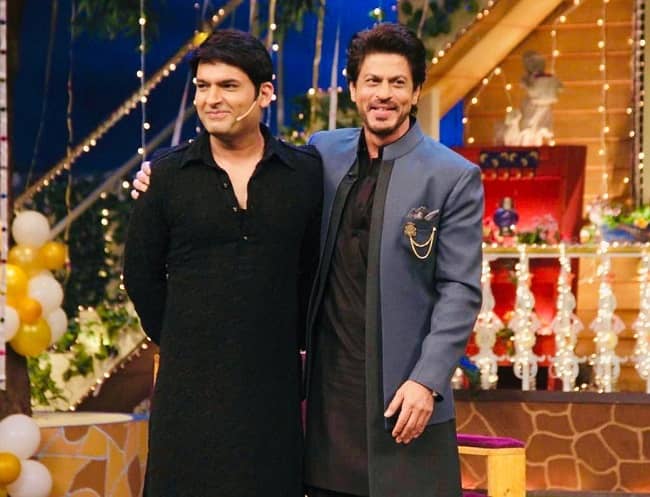 Kapil Sharma has been earning a good amount of fortune from his professional career. As of 2020, the net worth of Kapil Sharma is around INR 70 to 80 crore. Likewise, Kapil Sharma has a salary of Rs. 40 to 50 Lakh after being present in every episode.

In the year 2007, Kapil Sharma became the winner of the TV show, “The Great Indian Laughter Challenge”, which also gave him a cash prize of INR ₹10 lakh. There is no doubt that Kapil Sharma is one of the richest comedians in India.

The Indian actor and comedian is a happily married person and the name of his lovely wife is Ginni Chatrath. The couple’s wedding took place in Jalandhar on 12th December 2018. On 10th December 2019, the couple gave birth to their daughter. Then, on 1st February 2021, the couple again became the parents of their second child who is a son. The couple got to meet each other for the first time when they were present in the show, “Hans Baliye”. Before this, Kapil Sharma was dating a director, Preeti Simoes. 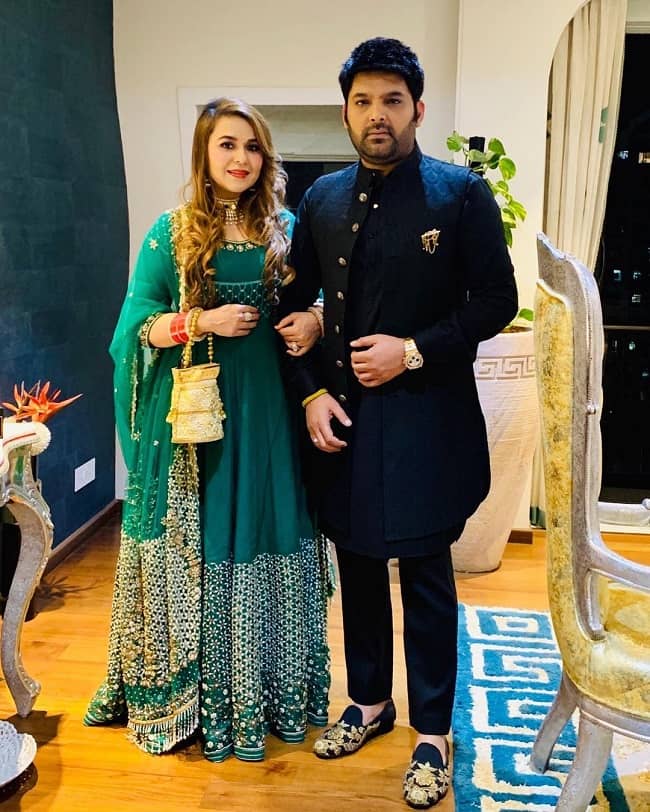 Kapil Sharma has been involved in some of the controversial matters. At first, Kapil Sharma got a chance to host in the Celebrity Cricket League in 2014 but he refused as he demanded his personal vanity van. In 2015, Kapil misbehaved with the stars, Tanishaa Mukherjee, Deepali Sayyad, and Monali Thakur in the International Marathi Film Festival Award event. However, the actor felt guilty and apologized through his Twitter account. At a point, the Indian actor has charged Rs. 5 lakhs as a bribe to BMC Office.

Kapil Sharma then tweeted to Narendra Modi saying, Ï paid INR 15 crore as tax, and still, I paid Rs. 5 lacs more to the officer”. Through this post, the officers asked Kapil for the name of the officer who took his bribe. Moreover, in 2017, the comedian and one of his friends, Sunil were traveling together through a plane. At that time, they were arguing with each other. Kapil then abused Grover in a verbal and physical way after which Sunil left the show.

Regarding the comedian’s body measurement, Kapil Sharma has a good height of 5 feet 9 inches or else 175 cm or 1.75 m. Kapil Sharma also has a suitable bodyweight of around 80 kg or 176 lbs. Similarly, the Indian comedian wears a shoe size of 9 (UK).

Kapil Sharma has a brown complexion with a pair of black eyes and black eyes. Other than this, there are no further details regarding Kapil Sharma’s body measurements, biceps’ size, and many more. Looking at his health, Kapil Sharma has a healthy body as he always looks very active in his every show.

Likewise, the actor has gained 32 million followers on his Facebook page. Not only this much, but Kapil Sharma also has his own YouTube channel. There he has gained 7.03 million followers as of May 2021. On the other side, his wife, Ginni Sharma is also present all over the social media platforms.