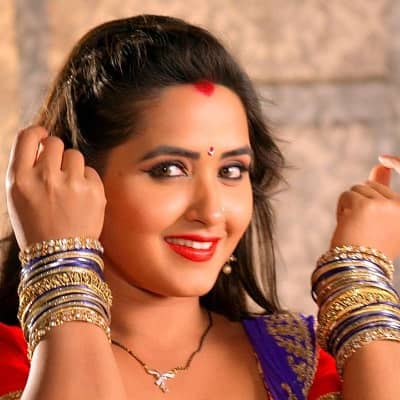 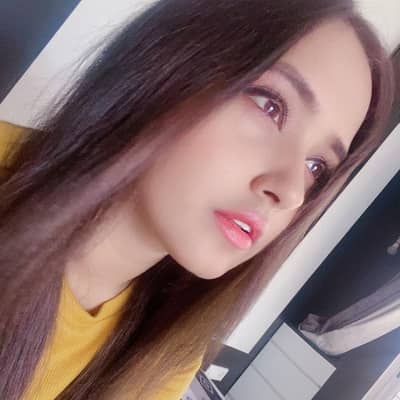 The actress’s birthdate is 20th July 1990, and her birthplace is Teghra, Begusarai, Bihar, India. As of 2021, Kajal Raghwani’s age is thirty years old and her sun sign is Cancer. Similarly, Kajal is an Indian native and has been following the Hindu religion. The actress belongs to a Rajput family and her father is from Gujrat. Sadly, there is no information regarding Kajal Raghwani’s parents. But it is for sure that Kajal’s father is a part of the gram panchayat in her village whereas his mother is a house maker.

Also, Kajal Raghwani has three siblings and their names are Dharmishtha Mistry, Vimal Raghwani, and one more whose detail is still missing. As for the actress’s educational background, she first went to the Govt. School located in Begusarai for her schooling. Kajal then went to Patna University located in Patna, Bihar for her further studies. Moreover, from the day Kajal was young, she was a growing interest in acting. Raghwani even set her mind to become a successful actress. 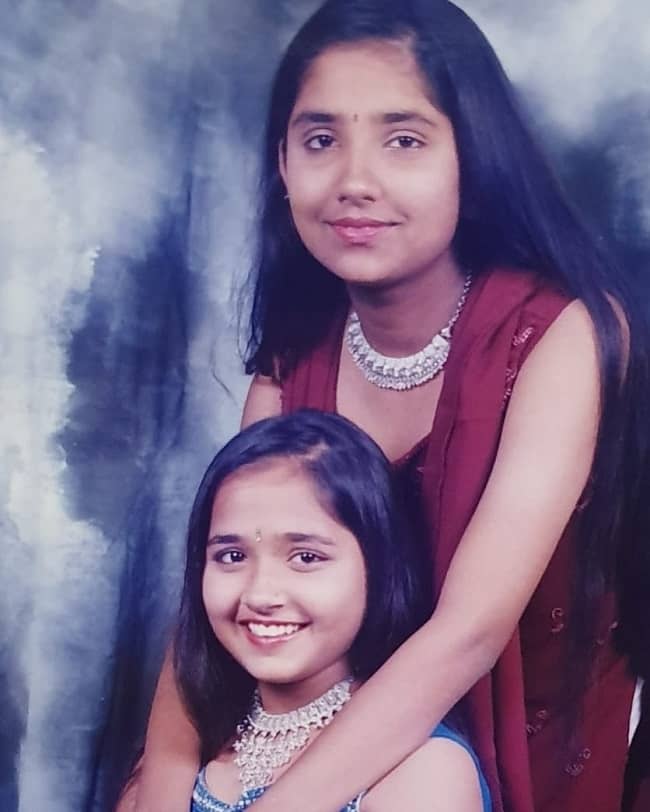 Caption: Kajal Raghwani with her sister when they were young (Source: Instagram)

The actress loves watching movies and her favorite celebrities are Salman Khan, Madhuri Dixit, and Sridevi, Rani Mukherji. Her hobbies are dancing and writing. Similarly, Kajal Raghwani’s favorite director is Rajnish Mishra. Kajal loves eating Chaat, Bhelpuri, and Paneer Chilli as well. Her favorite colors include pink, blue, and green.  The Bhojpuri actress loves to play together with her pet dog when she has free time. Moreover, Raghwani is a food lover as well and loves to consume non-vegetarian foods more often. Kajal Raghwani also wants to visit Moscow and even loves writing poems.

Kajal Raghwani began her professional career first by appearing in the Bhojpuri film industry. It was in the year 2011 when the actress was present for the first time in the movie, “Sugna”. Then, the actress conquered the movie industry. Kajal Raghwani works together with other several actors such as Pawan Singh, Khesari Lal Yadav, “Dinesh Lal Yadav” (Nirahuaa), Ravi Kishan, and many more. In the year 2013, the actress was present in the film, “Rihai”.

Next, she acted in two films, “Pratigya 2”, and “Devra Bhail Deewana” in the year 2014. Kajal was also present in the movies, “Patna Se Pakistan”, “Hukumat”, and “Baj Gail Danka” in the year 2015. Also, the actress then acted in several movies in the year 2016. The movies includes, “Bhojpuriya Raja”, “Jaaneman”, “Inteqaam”, “Aashik Aawara”, Danabang Aashiq”, and “Lagi Tohse lagan”. For her stunning performance in the Bhojpuri world, Kajal became the winner of the “International Bhojpuri Film Awards”.

It took place in the year 2016 in Dubai in the category of the best actress. In the year 2017, the actress appeared in other various films such as “Jai Mehraru Jai Sasurari”, “Tere Jaisa Yaar Kahan”, “Ham Hain Hindustani”, and “Pyar Ke Rang Hazaar”. Moreover, the actress got the role as a cameo in the film, “Sarkar Raj”, as Kajal in “Mehandi Laga Ke Rakhna”, and as Pooja in “Mai Sehra Bandh Ke Aaunga” all in the same year.

Some more her career

After then as well, the actress has been present in several films like “Muqaddar”, “Deewanapan”, “Dulhan Ganga Paar Kee”, “Bairi Kangana 2”, “Sangharsh”, “Balam Ji Love You”, and “Naagdev”. She acted in all these films in the year 2018 only. Similarly, Kajal Raghwani got some roles in the movies “Maine Unko Sajan Chun Liya”, “Kashi Vishwanath”, “Vivah”, “Baaghi-Ek Yoddha”, and “Coolie No. 1” all in the year 2019.

In the year 2020, Kajal Raghwani gained more popularity all over the Bhojpuri world. After then, the Indian actress was present in “The Kapil Sharma Show” as a guest in order to promote her film. In fact, Kajal Raghwani is a very good friend of Kapil Sharma’s wife, Ginni Chatrath. Recently, the actress was seen in the Bhojpuri film, “Dulhan Wahi Jo Piya Man Bhaye” as Diya. Additionally, Kajal will be present in another Bhojpuri film, “Litti Chokha” which is released in 2021. 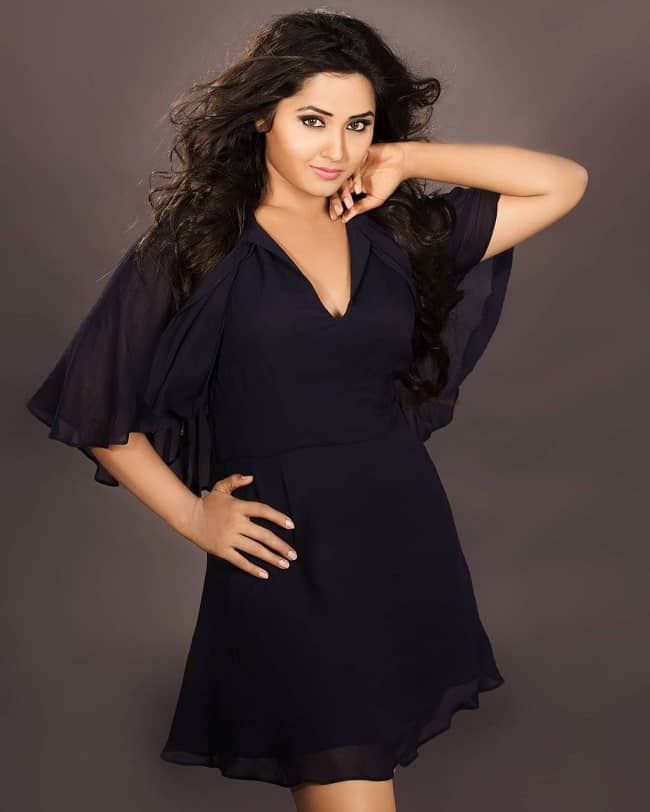 Kajal Raghwani has been earning a great amount of money from her professional career as an actress. The net worth of Kajal Raghwani was between INR 2 to 4 crore as of 2020. However, there are no details regarding Kajal Raghwani’s present net worth, salary, and assets. But it is for sure that the amazing Bhojpuri actress has been living a luxurious, happy, and free life in India. Also, Raghwani is doing great and still progressing for her successful career.

To this day, the Bhojpuri actress has always been single and has not dated anyone. As an actress, it is quite hard for Kajal Raghwani to find a loyal boyfriend.  The Bhojpuri actress once became a part of a rumor. The rumor was about Kajal Raghwani starting to like her co-star, Khesari Lal Yadav at the time when they were shooting for a film. It all started when the couple took an image where they were very close which looked like they were having an affair. On the other side, the co-star, Khesari Lal Yadav is a married man and is very loyal to his wife. This is the main reason which turned all the rumors to be fake. 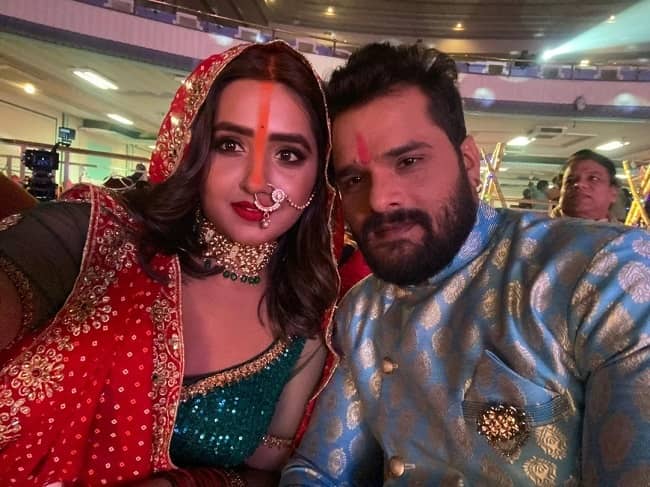 Being an actress, Kajal has to maintain her health and her posture as well. So, there is no doubt that Kajal Raghwani has good health with a suitable body type. Moreover, the actress loves tattoos and has one on her right arm’s wrist. Kajal Raghwanni is a fitness freak and always keeps her body and health in a proper statistic. In fact, Kajal Raghwani is considered the prettiest actress in the Bhojpuri Cinema.