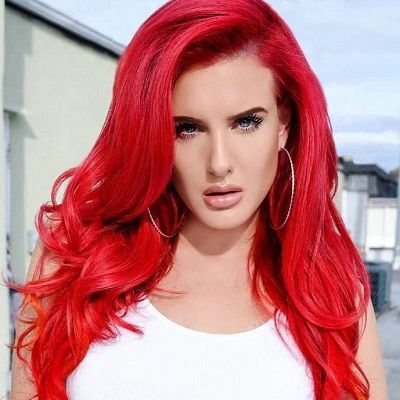 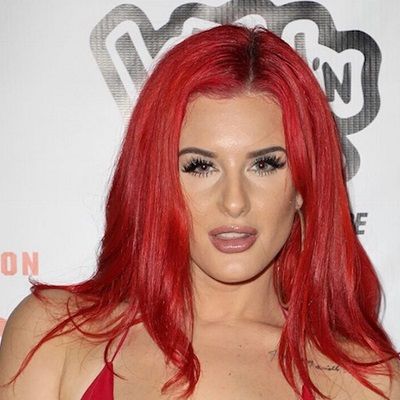 Justina Valentine is an American rapper, singer, and songwriter popular for her bright red hair. Justina Valentine is also a host and co-host for several TV shows like “The Challenge Reunion”, “Jersey Shore Reunion”, “How Far Is Tattoo Far?”, “Basic to Bougie, “Lip Locked”, and “Justina Makes Over Your Man”. Moreover, all of the shows she has so far hosted are broadcasted by MTV.

Justina Valentine was born on 14 February 1987 and she is currently 35 years old. Her zodiac is Aquarius, and her nationality is an American whereas her ethnic background is not revealed yet.

Similarly, she is originally from Passaic County, New Jersey. Her mother’s name is Nancy J. but the names of other family members, including her father, are unknown.

Moreover, she comes from a family of musicians. Her father serves as the lead vocalist in a band and also plays a variety of musical instruments. Also, she always had a love for hip hop and pop.

In the year 2006, Justina started recording her own music. She also said that she was never shy about being in the spotlight. She always loved to put on a show, make people laugh, and make people happy all in all.

She began starring in school and the local town plays as a child. She did so while taking dance lessons.

She is renowned for her bright red hair. Though her natural hair color is hard to know, she has also dyed her hair into blonde among other colors.

Talking about her body measurement details, she stands tall at a height of 5 feet 7 inches and weighs around 57 kgs. Moreover, she has beautiful blue eyes and her chest-waist-hip measurement is 33-26-35 inches respectively.

Talking about Justina Valentine’s social media presence, she is available on numerous platforms. She joined Twitter in March 2009 and has so far garnered 159.9k followers.

Similarly, on her Instagram account @justinavalentine, she has gained 3.5 million followers with 4518 posts as of April 2020. She also has a self-titled Youtube channel with 389k subscribers.

Justina Valentine is an American singer, songwriter, model, and television personality. She is most popular for her album Scarlet Letter and for the singles Candy Land, Unbelievable, and All The Way.

She is also known for her EP Valentine as well as the mixtapes Route 80, Red Velvet, and FEMINEM.

Further, talking about her TV presence, she appears as a regular cast member on the sketch comedy Wild ‘N Out. Valentine also appeared on the reality game show titled The Challenge: Champs vs. Stars.

As a singer, she has been a part of several tours up to date. The popular tours that she participated in include Vans Warped Tour, Relief Tour, Liquid Sunshine Experience Tour,

As Seen on the Internet Tour, Hate Us Cause They Ain’t Us Tour, Scarlet Letter Tour, Weirdo Tour, and Futuristic Tour among many others.

On a personal note, she is a very stylish and charming woman. She is also known for her vibrant red-colored tresses. Moreover, she is also considered very photogenic and sexy. 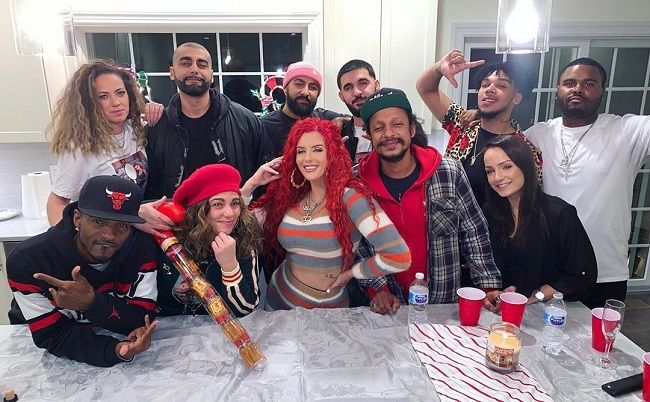 Caption: Justina Valentine at a Christmas dinner with her company in 2019. Source: Instagram

To talk in more detail about the singer’s career journey, she released her first mixtape Route 80 in the year 2012. This mixtape consisted of many singles including“Hip-hop Joan Jett and Bubble Gum.

All the singles became huge hits on YouTube. Later, she released her first EP titled Valentine in the year 2013. This again became a hit.

The next year, Valentine released her second mixtape titled Red Velvet. Red Velvet featured special guest Maino. Then, this was followed by the hungover single “Faded” in 2015, along with the follow-up “Candy Land,”

featuring Fetty Wap. Then, in 2016, she released her debut studio album Scarlet Letter.

The same year, Justin also joined the cast of the 8th season of MTV’s improv series Wild ‘N Out. Soon, the American rapper released her mixtape titled FEMINEM in the year 2017.

The same year, Valentine also competed in the reality series The Challenge: Champs vs. Stars. She loves the spotlight and also loves to crack jokes and make people laugh.

She also loves her fans and admirers and stays connected to them via social networking platforms.

She is also the MTV’s quick-witted fan favorite from Nick Cannon’s Wild N Out. She also is a clever lyricist that has a distinctive voice and knack for irresistible hooks.

Likewise, She is also a media influencer with millions of followers on her social media profiles. Likewise, Valentine also has an infectious personality, and she is an entertainer who loves to sing, write, act, host, and is widely known for her freestyling ability.

Additionally, the young artist began dropping mixtapes in 2010 and joined the Vans Warped Tour in 2012 and this really kicked off her career.  She has also appeared on a series of McDonald’s commercials.

She has also been the co-host on other popular MTV shows such as TRL and Singled Out, The Jersey Shore Reunion, The Challenge Reunion, Ridiculousness, and Double Shot at Love.

Valentine also appeared on MTV’S number one show The Challenge. Moreover, in November 2018, she co-hosted a relaunched version of the MTV dating game show Singled Out with rapper and fellow Wild ‘N Out cast,

Conceited. The show aired exclusively on the network’s YouTube channel. 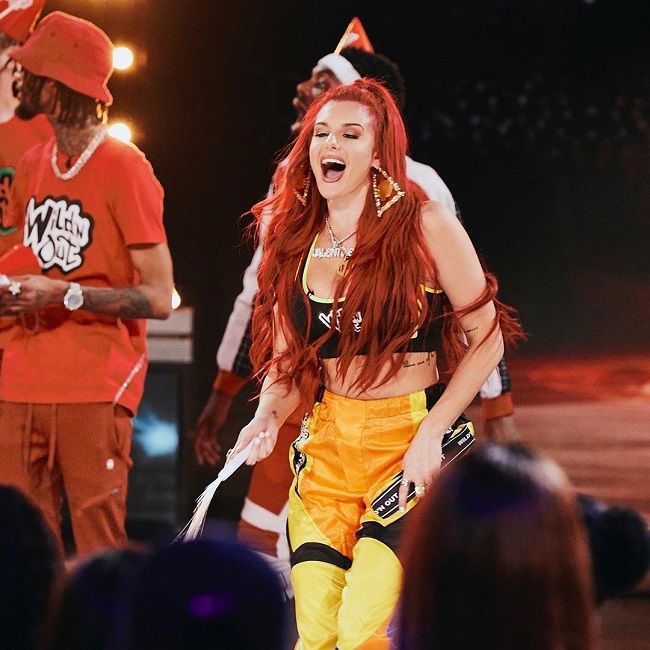 Her original music has been featured on several channels like NBC, VH1, MTV, Oxygen, and CW among others. Her music also featured in national TV commercials for brands like Maybelline.

She made hip hop history in 2018 on popular radio show Sway in the Morning. There, she became the first female to freestyle on Sway’s famous “5 Fingers of Death”.

Her latest album Favorite Vibe released in 2019 debuted in the top 30 on hip hop charts this June 2019. This album also gained over a million streams in the first two weeks after its release.

Favorite Vibe follows Feminem, which is her mixtape of Eminem’s classics.

Additionally, she also offers 100+ million impressions which continue to grow daily. She is a co-hosts MTV’s How Far is Tattoo Far? and Lip Locked. They air weekly on MTV.

Moreover, she Valentine also wrapped filming her 9th season of MTV’S Wild N Out which airs every Tuesday on VH1.

Further, she also appeared in North Housing Authority as a teacher and she then appeared as a stripper in Grind: The Robert Wilmot Story.

At present, she also works on her exclusive streetwear merchandise. She features some of her latest hoodie, T-shirt, and sweatshirt among others.

At present, Justina Valentine is officially single. She is rather focused on strengthening her career as a singer, rapper, songwriter, and host of TV shows.

However, she was once rumored to be a bisexual when she kissed the fitness and bikini model Sommer Ray. They kissed on the set of MTV Wild N Out. 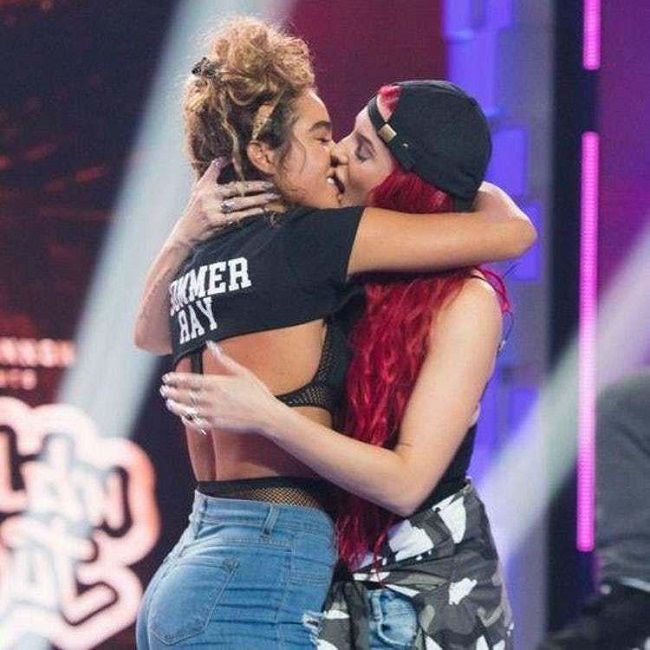 On her official Facebook page, she has 1.2 million followers.

Moving on, she has an estimated net worth of $1.5 million dollars. Most of her earnings are from her involvement in rap and singing, TV shows, and much more.