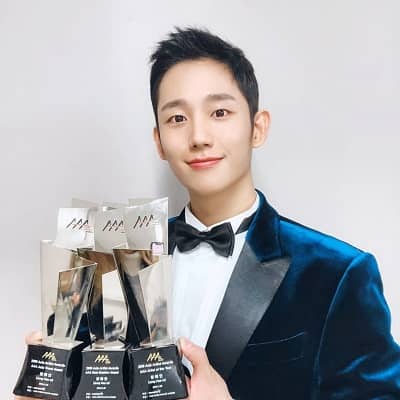 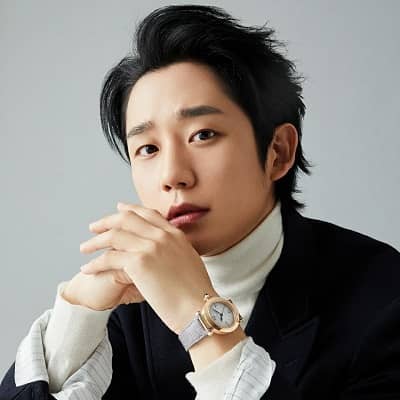 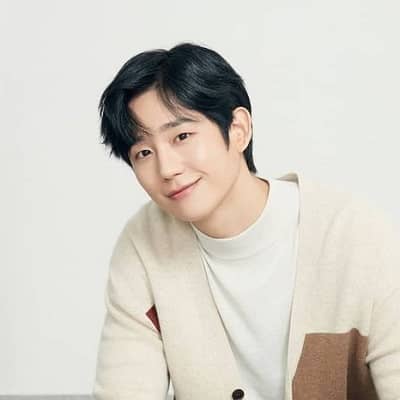 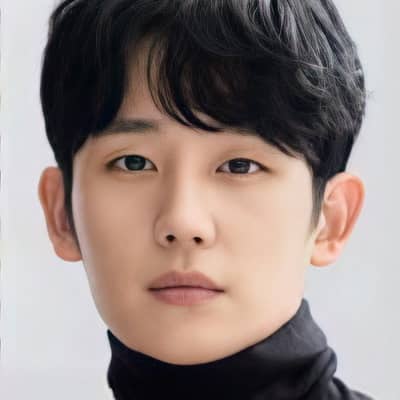 Jung Hae-in is a prominent South Korean actor and model. Jung Hae-in rose to immense fame after appearing in films and TV dramas including “While You Were Sleeping”, “Prison Playbook”, “Something in the Rain”, and “One Spring Night” among many others.

Jung Hae-in was born on April 1, 1988, and he is currently 33 years old. He hails from Seoul, South Korea, and his zodiac sign is Aries. Similarly, Hae-in graduated from Pyeongtaek University with a Bachelors’s degree in Broadcasting Entertainment.

During his college, Hae-in participated in various activities including musical plays. Talking about his family, his third great-grandfather is Jeong Yakyong. Jeong Yakyong was a great thinker of the later Joseon period. His name is written in Korean (Hangul) as 정해인 and in Hanja as 丁海寅. While translating his name from Korean, his name is also written as Jeong Hae-in. 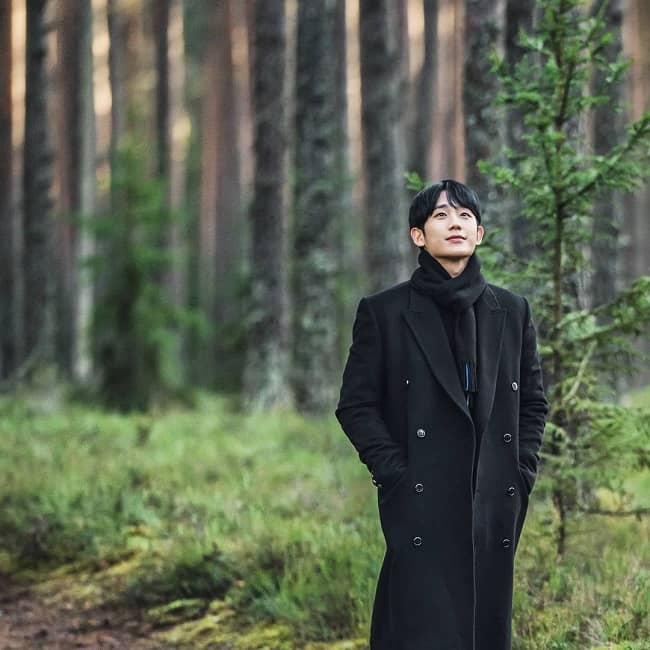 Jung Hae-in is a professional actor. The prominent Korean actor made his first appearance in AOA Black’s music video for Moya in the year 2013. He later officially debuted through the TV series Bride of the Century the next year, i.e. 2014.

Similarly, Hae-in gained immense recognition for his supporting roles in the year 2017 with the TV series While You Were Sleeping and Prison Playbook. He also had his first lead role in the 2018 drama Something in the Rain.

Furthermore, his first acting experience was in college where he participated in a musical. His determination to build a life in the field of acting was established when Hae-in was in the military service. There, the actor lost 12 kilograms in order to achieve his dream. Likewise, he was 26 years old when Hae-in debuted as a professional actor.

In the year 2014, he also appeared in the indie film The Youth and also in the historical series The Three Musketeers. The actor then starred in small roles and made several cameo appearances for various TV series and films from 2014 to 2016. Some of the most memorable appearances were in Guardian: The Lonely and Great God as the lead character played by actress Kim Go-Eun’s first love and in Reply 1988 as Bo-young. 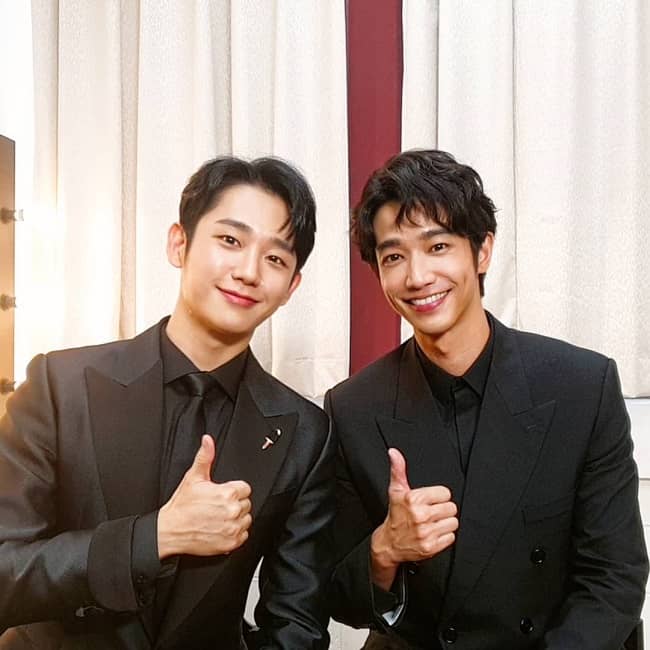 Caption: Jung Hae-in posing for a photo with the Chinese actor Jasper Lee at the 2019 Golden Bell Awards. Source: Instagram

In the year 2017, Jung Hae-in gained international popularity with his performance in the fantasy romance series While You Were Sleeping. During this time, he ranked as the Number 1 searched term on the Korean portal site “Naver”.

Similarly, he also appeared in two historical movies titled The King’s Case Note and Conspiracy: Age of Rebellion in the year 2017. Likewise, Hae-in appeared in the black comedy series Prison Playbook in which the actor received a lot of praise for his performance. Hae-in played the role of an imprisoned Army captain convicted of assaulting a soldier in his unit who later died.

In the year 2018, Hae-in also starred in another historical film Heung-boo: The Revolutionist. In this film, Hae-in portrayed the character of King Heonjong. He then landed his first lead role in the romance drama Something in the Rain alongside actress Son Ye-jin. He later starred in the period romance film Tune in for Love alongside actress Kim Go Eun.

Additionally, in the year 2019, Hae-in starred in the youth film Start-Up. For this project, the actor played the role of a school drop out who ends up in a gang. The same year, Hae-in also appeared in the romance drama One Spring Night alongside Han Ji-min. For this project, he worked with the same director and writer of Something in the Rain.

In the year 2020, the actor starred in the romance drama A Piece of Your Mind alongside actress Chae Soo-bin in the lead female role. The same year, Hae-in joined on JTBC drama Snowdrop alongside Kim Ji-soo. This project is directed by the writer and producer of Sky Castle. 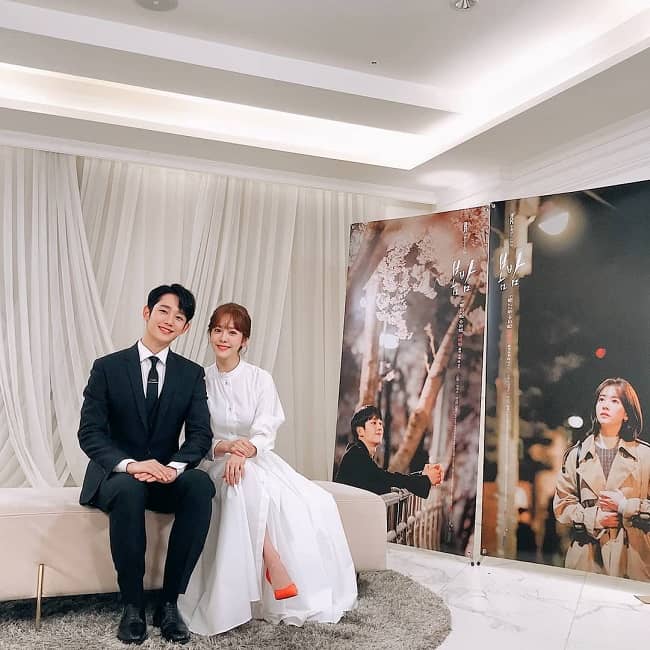 Caption: Jung Hae-in posing for a photo with his co-star of ‘One Spring Night’, actress Han Ji-min. Source: Instagram

Hae-in has won a total of 16 awards while writing this biography. Besides the ones he won, Hae-in has also been nominated for 7 other awards. Some prestigious awards that Hae-in won the “Best New Actor” at the 56th Grand Bell Awards in the year 2020.

In the year 2019, he also won the “Best New Actor” award at Cine 21 Awards; “Popularity Award” at the London East Asia Film Festival; “Minister of Culture, Sports, and Tourism’s Commendation” at the 10th Korean Popular Culture & Arts Awards, and many more. The same year, he also bagged the “Best Icon” and “AAA Potential (Actor)” at the 4th Asia Artist Awards. 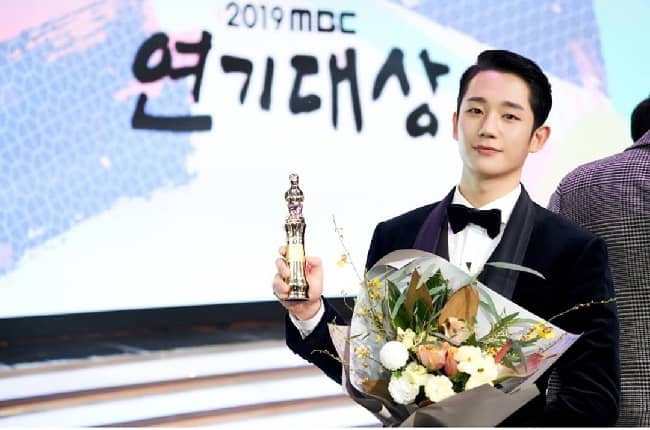 Caption: Jung Hae-in posing for a photo with his award at the 2019 MBC Awards. Source: Instagram

Actor Hae-in enlisted in the military at the young age of 21 years. Hae-in then signed a contract with his agency, FNC Entertainment, after graduating from the military and college.

Likewise, Hae-in maintains a close friendship with actors Lee Jong-suk and Shin Jae-ha. They were all co-stars in the drama While You Were Sleeping. The actor also held his first fan meeting in Seoul on 28 July 2018. It was held at Kyunghee University Hall of Peace. Further, he followed this fan meeting with other meetings in Taipei, Bangkok, Hong Kong, and Manila. Other than this, there is no information regarding actor Hae-in’s romantic relationships and love affairs. 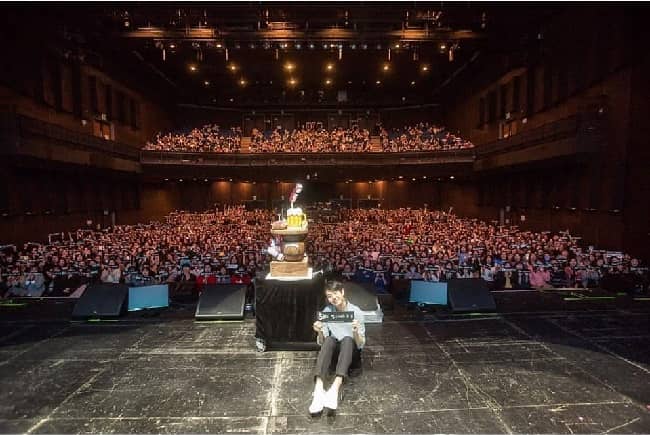 Caption: Jung Hae-in posing for a photo at his fan meeting. Source: Instagram

Jung Hae-in stands tall at a height of approximately 1.78 meters or 5 feet 10 inches and his weight is around 64 kgs. Other than this, there is no information regarding his other body measurement details including his chest-waist-hip measures, dress size, shoe size, biceps, etc. Likewise, Hae-in has dark brown hair and eyes of the same color.

Talking about the actor’s social media presence, Hae-in joined Twitter in January 2013 and he has earned over 103.8K followers as of December 2020. Likewise, his username on Instagram is @holyhaein. He has garnered more than 4.7 million followers and shared exactly 490 posts while writing this biography (December 2020).