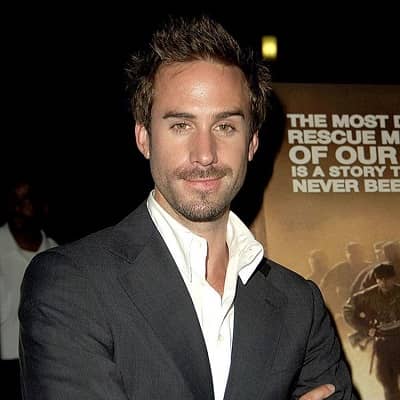 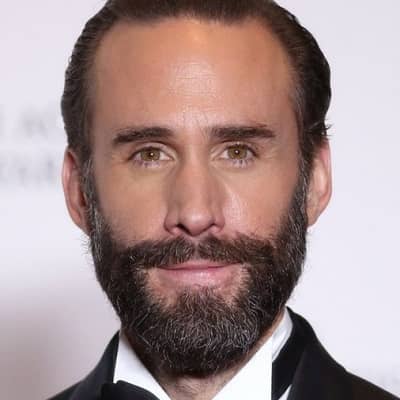 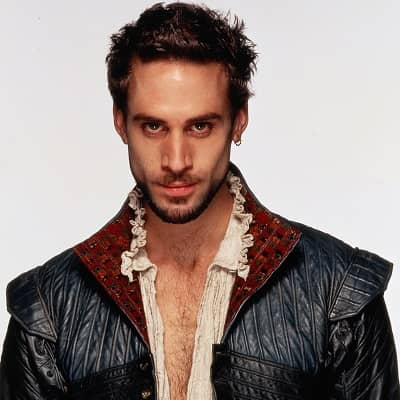 Joseph Fiennes is a famous English actor. Joseph Fiennes gained fame for his role in various TV series and films including ‘Elizabeth’, ‘Shakespeare in Love’, ‘Hercules’, ‘Urban Myths’, ‘The Handmaid’s Tale’, and ‘Sherwood’ among numerous others.

Joseph Fiennes was born on 27 May 1970, and he is currently 50 years old. He hails from Salisbury, Wiltshire, England, and his zodiac sign is Gemini. His full name is Joseph Alberic Twisleton-Wykeham-Fiennes. His name is pronounced ” hoe-sef fee-hen-ayes” as mentioned in his Instagram bio. 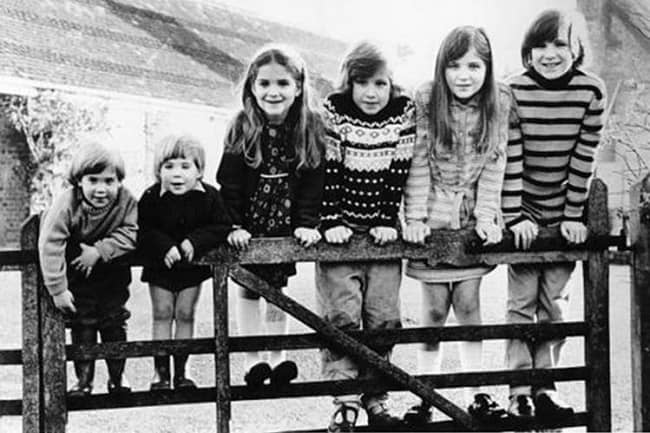 Caption: Joseph Fiennes captured in a childhood photograph with all his biological siblings. Source: The Wall Street Journal

Joseph Fiennes briefly pursued an education in the Republic of Ireland. The actor then attended Swan School For Boys before passing his 11+ exam and continuing to Bishop Wordsworth’s School. At present, Swan School is famous as “Leehurst Swan School” following a merger with another school. It is an independent school in Salisbury. Likewise, Bishop Wordsworth’s School is a voluntary-aided state day grammar school, in the Cathedral Close of the city.

Later, Joseph attended art school in Suffolk for a year. This was prior to joining the Young Vic Youth Theatre. Subsequently, Joseph Fiennes trained for three years at London’s Guildhall School of Music and Drama. He graduated from there in the year 1993.

Likewise, the famous actor is also famous for playing the role of Sir Robert Dudley in Elizabeth in 1998, as Commisar Danilov in Enemy at the Gates in 2001, and as Monsignor Timothy Howard in the second season of the TV series American Horror Story. Similarly, Joseph’s role in the 2017 TV drama series The Handmaid’s Tale received nominations for the “Primetime Emmy Award for Outstanding Supporting Actor in a Drama Series”. 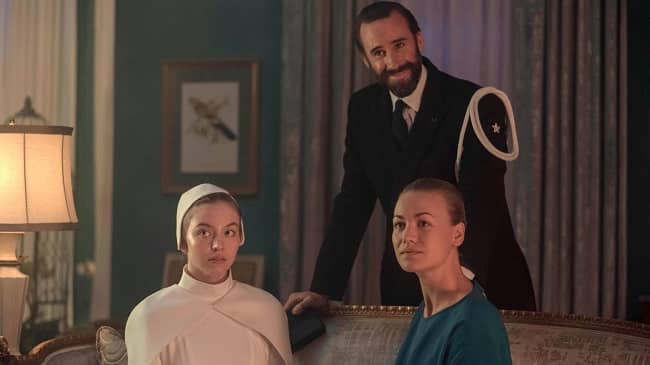 Actor Joseph Fiennes’ first professional stage appearance was in the West End in The Woman in Black. He followed this with A Month in the Country working opposite actress Helen Mirren. Joseph then became a member of the Royal Shakespeare Company for two seasons.

Furthermore, Joseph Fiennes made his TV debut as Willy in The Vacillations of Poppy Carew. Then, Joseph had his first feature film in the year 1996. It was with the film Stealing Beauty. For this project, Joseph co-starred with actor Liv Tyler.

In the year 1998, Joseph Fiennes appeared in two films that received nominations at the “Academy Awards”. They are Elizabeth and Shakespeare in Love. For the former, he appeared as Robert Dudley working opposite Cate Blanchett. In the latter, Joseph appeared as William Shakespeare working alongside Gwyneth Paltrow. 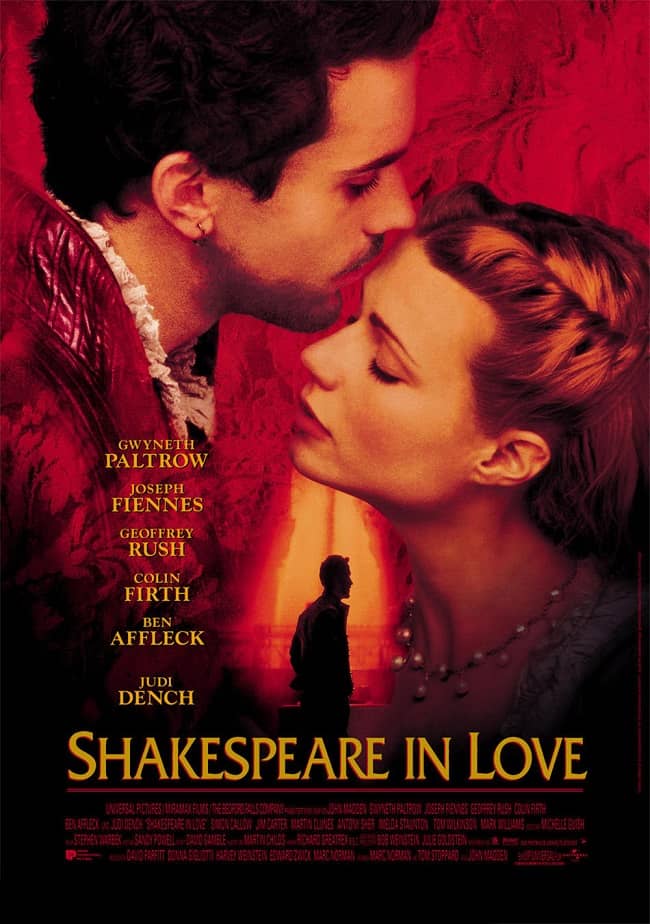 Caption: Joseph Fiennes appearing on the poster of ‘Shakespeare in Love’. Source: IMDb

Then in the year 2001, Joseph Fiennes appeared in the film Enemy at the Gates. A year later, he appeared in the independent film, Killing Me Softly. Then in 2003, Joseph lent his voice as “Proteus” in the DreamWorks animated film Sinbad: Legend of the Seven Seas. For this project, Joseph worked opposite Brad Pitt.

The same year, Joseph also starred in Luther and his role was the character, Martin Luther. He also worked in The Merchant of Venice where he portrayed Bassanio. The actor then returned to the theatre in the year 2006. It was to perform in the one-man play Unicorns, Almost. It is about World War II poet Keith Douglas at the Old Vic.

In the year 2006, actor Joseph also appeared in the films The Darwin Awards and Goodbye Bafana. The latter’s film director was Bille August. They filmed this in South Africa and released it in the year 2007. Joseph Fiennes portrayed James Gregory in this film. James is the author of the book Goodbye Bafana: Nelson Mandela, My Prisoner, My Friend. 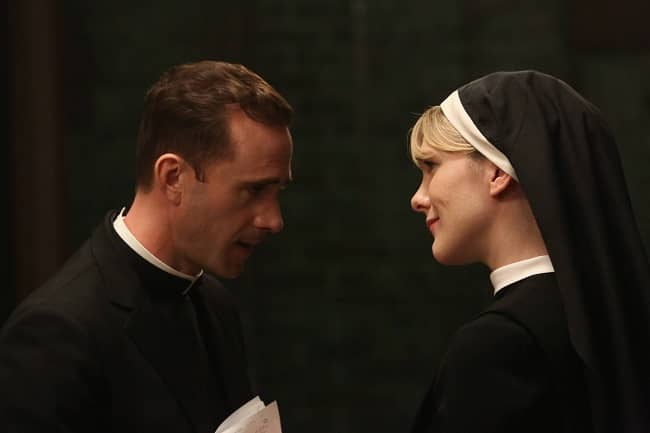 Joseph Fiennes starred in FlashForward. It is the ABC science fiction series that debuted on 24 September 2009. This series ran through 27 May 2010. For this project, Joseph appears as Mark Benford. Similarly, the actor also starred in Starz’s 10-part series, Camelot, playing the role of the wizard Merlin.

Then in the second season of American Horror Story, actor Joseph portrayed the role of Monsignor Timothy Howard. The actor is also seen currently on the Hulu original series The Handmaid’s Tale. Joseph also starred in Forever Mine as Cabana Boy/Criminal Attorney who falls in love with his soul mate and refuses to give up on love.

Joseph Fiennes is married to María Dolores Diéguez. María is a Swiss model of Spanish origin. The lovers tied the knot in a Roman Catholic ceremony in Tuscany in August 2009. The couple shares two beautiful daughters namely Sam and Isabel. 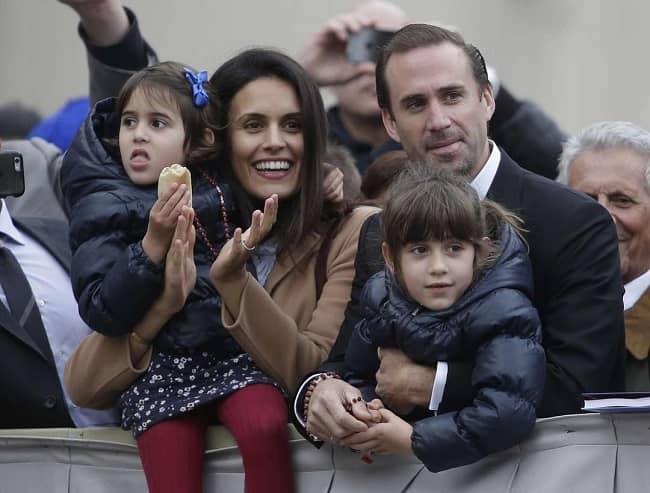 Caption: Joseph Fiennes captured in a photo with his wife and children. Source: Instagram

Joseph Fiennes stands tall at an approximate height of 1.83 meters or 6 feet and his weight is around 174.16 lbs or 79 kgs. Likewise, Joseph has mesmerizing hazel brown eyes and brown hair color.

Talking about his social media presence, Joseph Fiennes is available on Instagram under the username @josephfiennesiskillingmesoftly. While writing this biography, the actor has shared exactly 133 posts and garnered over 608 followers.