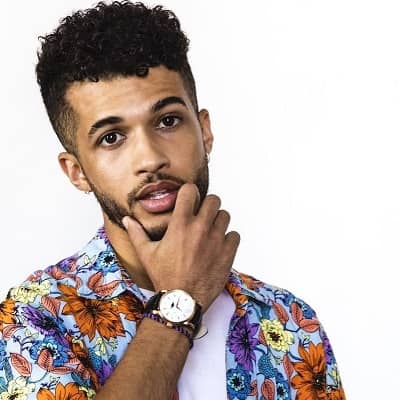 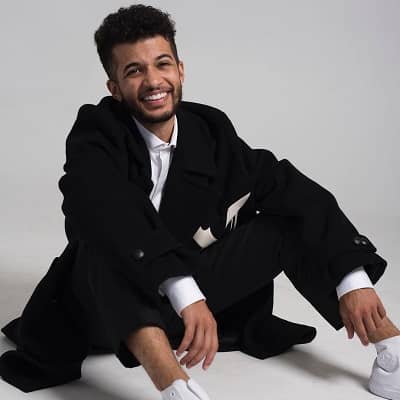 Jordan Fisher is a popular American singer and actor who hails from Birmingham, Alabama, the United States. The actor Jordan Fisher was present in various Hollywood movies such as “Teen Beach 2” and “Stay” and also has brought various singles.

The talented actor, Jordan Fisher’s birthdate is 24th April 1994 and his birthplace is Birmingham, Alabama, United States. Her full name is Jordan William Fisher. He is an American native and has been following the Christian religion. Likewise, his age is twenty-seven years old and his sun sign is Taurus.

The name of his maternal grandfather is Rodney Fisher and his grandmother is Pat Fisher. He also has two siblings and their names are Cory and Trinity. Also, he was just sixteen years old when she gave birth to him. Additionally, his grandparents adopted him with his siblings and raised them. It was due to their mother struggling with substance abuse.

So, he does not have a relationship with them. In an interview with Hollywood Today Live, the actor told about his multi-ethnic background of Italian, Greek, Nigerian, Cambodian, English, Polynesian (Tahitian), and also the Scandinavian origin. At the age of just two, he started getting engaged in gymnastics. After that, Fisher started gaining some interest in musical theater after being cast in a school production of School House Rock, Jr when he was in 5th grade.

Also, the actor did home-schooling when he was a kid and has achieved a high school diploma from Harvest Christian Academy. Fisher then went to the Red Mountain Theatre Company which is in Birmingham and was a member of their youth performing group for several years. There, he was found by a skilled scout who gave him an offer to represent him. Then, the actor went to Jacksonville State University in the year 2011. In the following year, the actor went to Los Angeles, California, together with his grandparents and siblings. 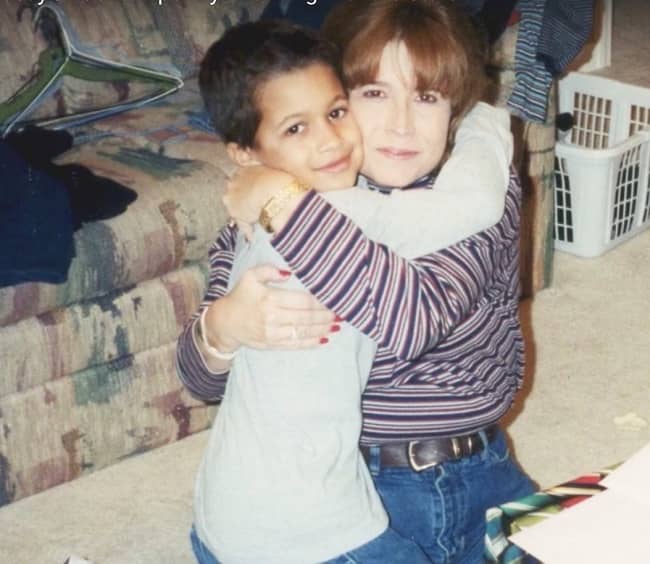 Caption: Jordan Fisher with his grandmother when he was young (Source: Instagram)

At first, Jordan Fisher turned out to become very close to getting chosen several times. In the year 2009, Fisher got some guest characters in several TV shows such as “The Hustler”, “iCarly” and also in “Skyrunners Testimonials”. Then, the actor got the main character of Jacob in ABC’s teen drama, “The Secret Life of the American Teenager” in the year 2011. After some time, he went to he moved to Los Angeles together with his family so that he could pursue his career as a full-time actor.

The actor after then received the repetitive character of Holden Dippledorf on Disney’s “Liv and Maddie” in the year 2015. In fact, the actor has acted for the character for eleven episodes in the whole 2 seasons. He then was present as Doody on “Grease: Live” which is a live TV adaptation of the 1971 musical “Grease” in the year 2016. In November, he returned to theatre and was present in the Broadway production of “Hamilton”.

After watching and hearing the actors playing the piano and singing at the time of the promotion of the movie, “Teen Beach Movie”. Then, the music manager established him for a meeting together with the program director for Radio Disney. The artist came up with his 1st single, “By Your Side” in the year 2014. Likewise, he brought 2 more pop-soul songs, “Never Dance Alone” and “What I Got”. In the year 2015, he got together with the Disney Channel Circle of Stars for a cover of the song “Do You Want to Build a Snowman?” which is from the movie “Frozen”.

In the same year, the singer sang 2 versions of the song “True Love” on the television series, “Liv and Maddie”. He then sang several songs for the movie of the year 2015, “Teen Beach 2”. Besides his lending vocals to 3 songs, he sang the solo “Wanna Be With You” and also the duet “Fallin’ For Ya”. He then made a deal with Hollywood Records for a record deal in the year 2015. Fisher’s 1st song was out from the label was “Counterfeit”, which was out on 1st February 2016.

On 15th April 2016, he came up with the single “All About Us” which later was in his self-titled 1st EP and it was out on 19th August 2016. He was also present on the single “Thin Air” from Olivia Holt’s self-titled 1st EP. The singer sang 2 songs in the film “Grease: Live”, among which the track “Those Magic Changes” turned to be a spotlight of the show, earning him accolades from critics. Moreover, the actor sang the final-credits duet ‘”You’re Welcome” together with Lin-Manuel Miranda in the Disney movie, “Moana”. 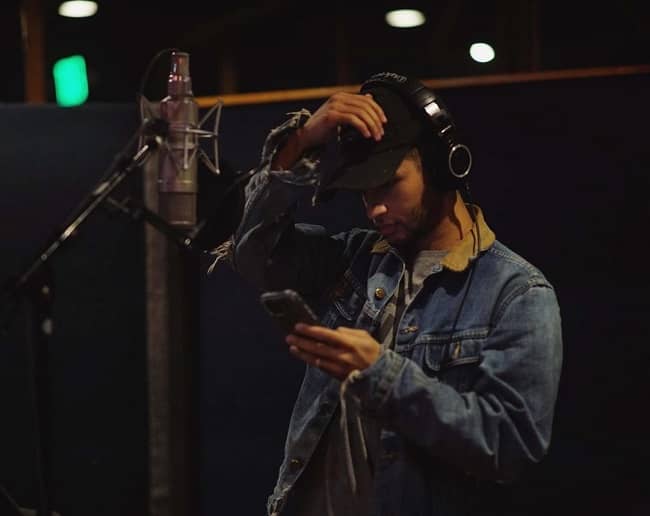 He has a net worth of around $1 million. His primary source of income is his involvement in the entertainment industry as an actor and singer as well. Also, the talented American personality must have earned some fortunes from his social media accounts as he has millions of fan followers there. Currently, he is living a happy and luxurious life together with his family in the United States.

Jordan Fisher is a married man and his childhood sweetheart, Ellie Woods is his wife. On 29th May 2019, the couple revealed their engagement and even were going to get married on 25th July 2020. However, their marriage was postponed because of COVID-19. Then, the couple finally got married on 21st November 2020 at Walt Disney World. Furthermore, the couple began to stay in a romantic relationship from the year 2017.

After some time in the year 2019, the actor proposed to his girlfriend, Ellie Woods and they eventually got engaged to each other. In the year 2020, the couple was expecting to get married as he had told the same in one of his Instagram posts. 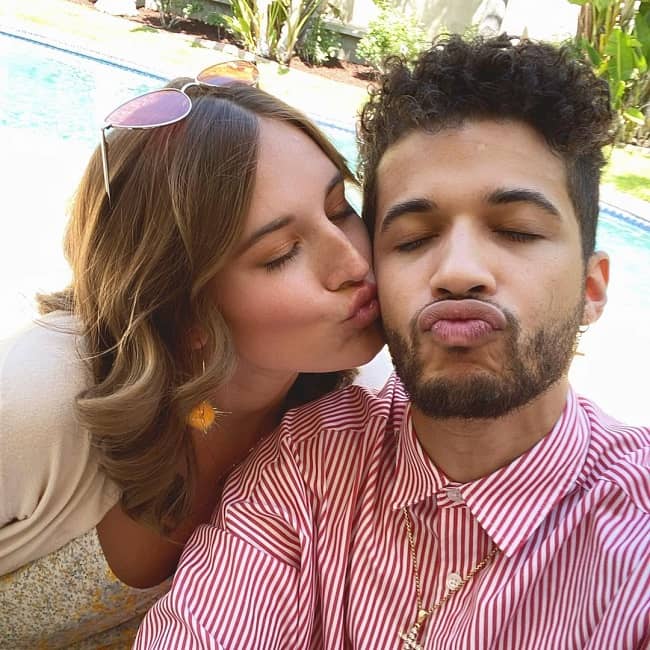 Regarding body measurement, Jordan Fisher has a good height of 5 feet 8 inches or else 173 cm or 1.73 m. He also has a suitable bodyweight of around 73 kg or 162 lbs. Similarly, the talented singer wears a shoe size of 9 (UK) and has a stylish dressing sense.

Jordan Fisher also has a pair of dark brown eyes with short black hair. Also, the size of his biceps is 15 inches. The actor’s chest size is 38 inches and his waist size is 34 inches. In addition to that, the American actor has a fair complexion with a great and dashing personality. He has a nose piercing and wears a nose ring as well.