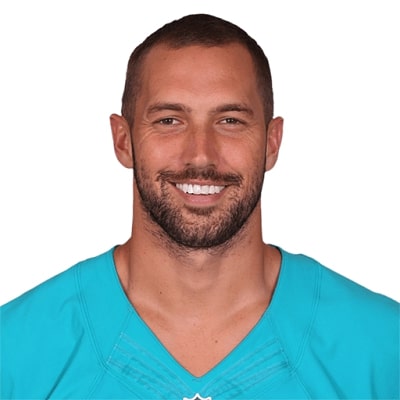 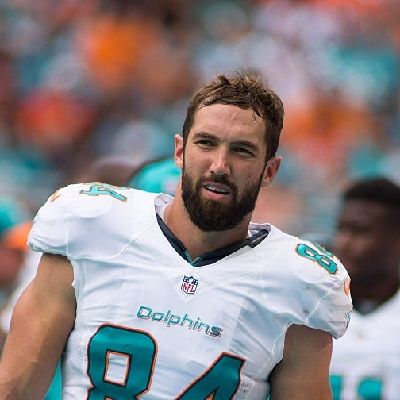 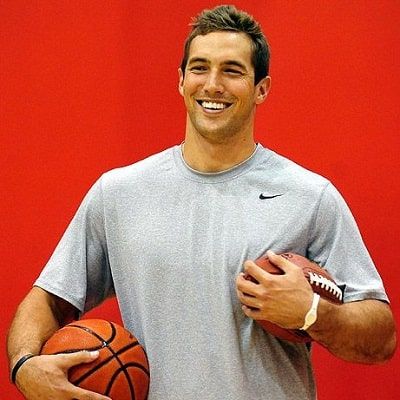 Jordan Cameron is a prominent American basketball player. Jordan Cameron previously played American Football during his college. He also played for Cleveland Browns and Miami Dolphins before retiring in 2017. The reason behind his retirement was concussion injuries.

Jordan Cameron was born on 7 August 1988 and is currently 32 years old. His birthplace is in Los Angeles, California and his zodiac is Leo. Similarly, his parents are mother Cathy (née Cravens) and father Stan Cameron. His father works for a telecommunications company. Moreover, his full name is Jordan Cravens Cameron. He grew up with a sister named Brynn and a brother named Colby.

His sister, Brynn, played guard on the USC women’s basketball team. She is also the mother of Matt Leinart’s child and shares custody of two children with NBA Star Blake Griffin. Likewise, his younger brother, Colby, was an undrafted free agent quarterback for the Carolina Panthers but was released before the 2013 NFL season. He is also the cousin of Denver Broncos’ safety Su’a Cravens. 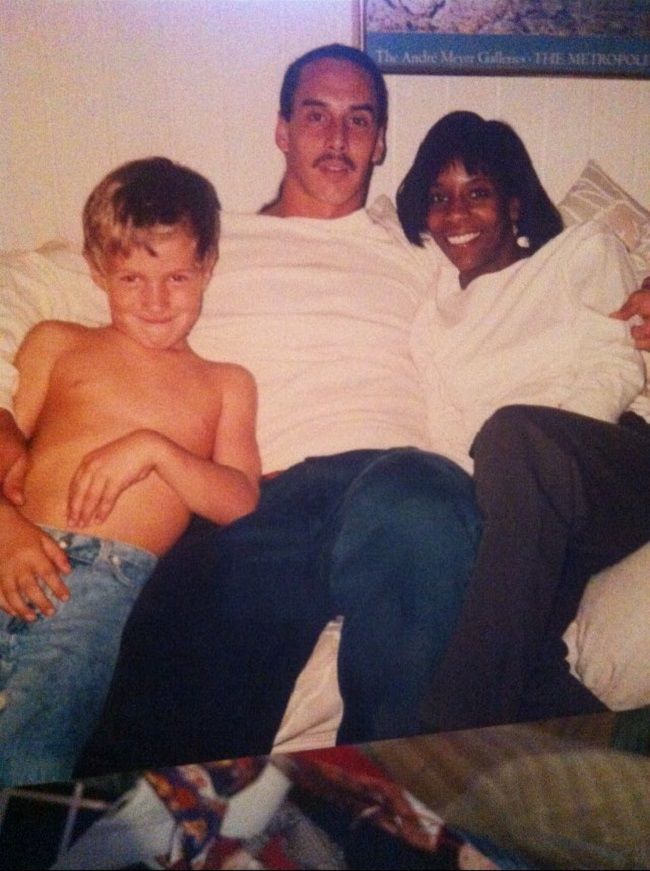 Moreover, he and his brother Colby often played various sports in their upper-middle-class locality. When they were still young, their family moved to Newbury Park, California. There, he attended Newbury Park High School in Newbury Park, California, and made the All-Marmonte League first team in 2005 as a junior. Later, as a senior in 2006, he made Prep Star All-West. And also once again made All-Marmonte League first team. Cameron caught 73 passes for 1,022 yards and 12 touchdowns in his senior year.

He had gotten invitations to study in major universities such as Yale, Harvard, and the University of Southern California (USC). However, after high school, Cameron decided to play basketball instead of American Football and hence joined Brigham Young University. After redshirting his freshman year in 2006–07, he decided to give football another try. He transferred to USC to play football as a wide receiver in 2007.

When he was in Brigham Young University, Utah’s football coach – Kyle Wittingham – came in touch with the family and asked him to play football. Because Kyle Wittingham believed that he had a great future in this particular sport.

However, when the university refused to accept some of Cameron’s credits from Brigham Young, he was forced to withdraw and attend Ventura College. He missed the football season but was given the option to rejoin the team in 2008. Even if he had stayed at USC, due to NCAA transfer rules he would have been ineligible to play in 2007.

Then he ended up enrolling at USC a year later and saw brief action for the Trojans at wide receiver in both the 2008 and 2009 seasons, but did not make any catches. Prior to his senior year, the team moved him from receiver to tight end and really embraced the move. In his final season at USC, he caught 16 passes for 126 yards and a touchdown.

After his senior season at USC, he was invited to play in the East-West Shrine Game. There, he made a big impression on the coaches during the week of practice. He also helped his draft stock significantly during his workouts at the NFL Combine. Then he was in the top three of every drill he participated in and fifth in bench press reps. He was projected to be mid to late-round pick in the 2011 NFL Draft. 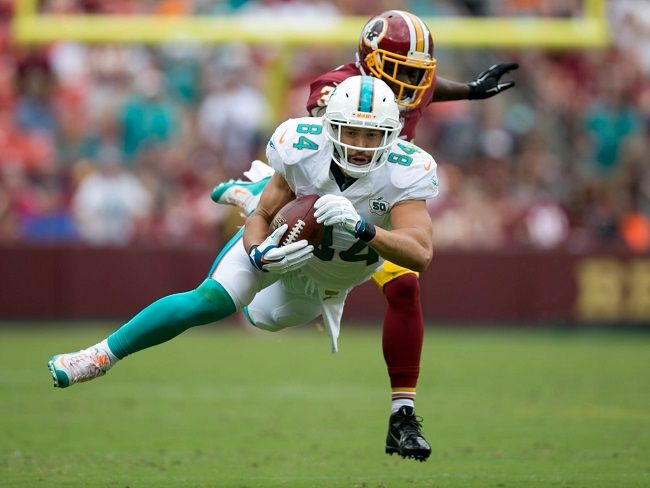 He was placed on injured reserve on 5 November 2016 after suffering a season-ending concussion injury. On 10 March 2017, after suffering four concussions in six seasons, he announced his retirement from the NFL.

Jordan Cameron is currently in a romantic relationship with Elin Nordegren. The lovers also share a son together born in October 2019 but the baby’s name is not available. He and Elin met each other for the first time at Art Basel in Miami. They dated for two years and had the baby.

Besides the baby with Elin, he also has another son named Tristan from his previous relationship. However, he has not mentioned is the first child’s mother. Moreover, he was previously in a relationship with Erin Heatherton, an American Model.

After four years of divorce, Elin started her relationship with famous NFL player he in 2014. Elin is also a former model who also worked as a nanny. Fairly recently, Elin also applied for and received a license from the Florida state as a counselor for mental health. Also, she recently started a company located in her house called EN Therapy. 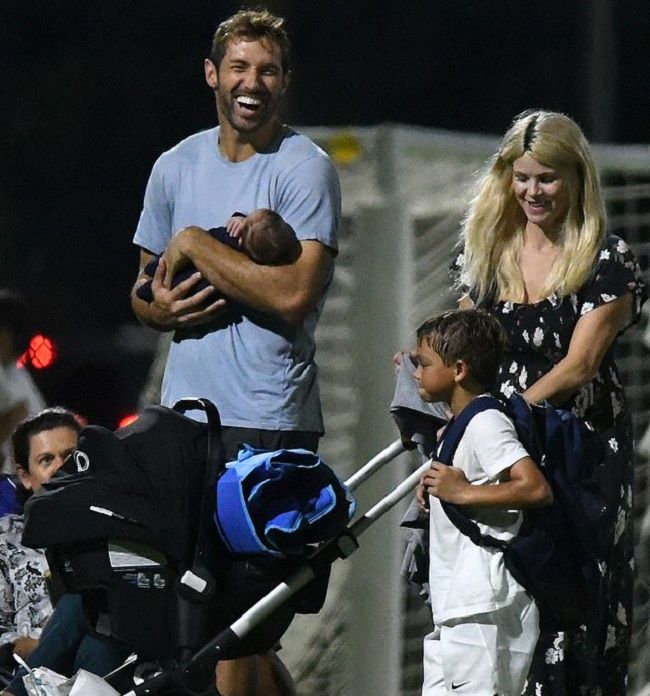 Caption: Jordan Cameron with his lover Elin and their children. Source: DeeReporters

Net Worth and Assets

Talking about his net worth estimation, it is around $20 million dollars as of 2019. Similarly, his estimated salary is around annually $6,000,000 dollars. Moreover, he transferred to Miami Dolphins in 2015. With Miami, he signed a $15 million dollar contract. Similarly, the salary bonus for the year 2015 was $4 million, and the roster bonus was $1.5 million dollars.

Apart from the financial aspects, Jordan has collected a massive fortune. This includes assets like cars and a house. In particular, he is currently residing in his $50 million Palm Beach home together with his girlfriend, Elin. Back in June 2016, he also brought a house in Westlake Village for $2.05 million.

It is a traditional house build in 1971. It has a covered pavilion with a stone fireplace, an outdoor kitchen, bar seating, and many more. Moreover, this house also consists of a swimming pool with waterfall features, custom lighting, and a spa.

Furthermore, this house has a formal dining room, a living room with a brick fireplace, an eat-in kitchen, and a game room. They constructed the game room in more than 3,500 square feet of space. Likewise, a total of five bedrooms and four bathrooms are equipped with a master suite with a glass-closed tub.

Additionally, Tim and Kevin Fitzgerald of Berkshire Hathaway HomeServices California Realty put the house on sale. Initially, they listed the house for sale on $2.099 million. Reportedly, his sister recommended him to buy this house.

Talking about his body measurements, Jordan is 1.96 meters tall in height, which is around 6 feet 5 inches tall. Similarly, his weight is around 120 kgs as per the recorded information. Moreover, he has dark brown hair and eyes of the same color.

He joined Twitter in January 2014 and so far has 33.9k followers. Other than this, he doesn’t seem to have any other social media accounts