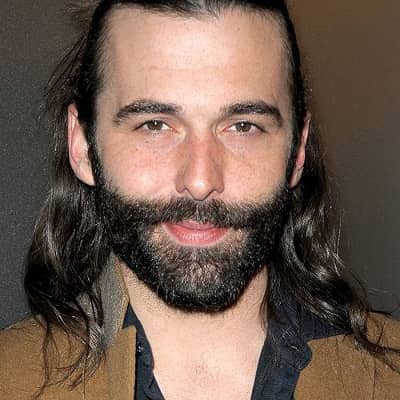 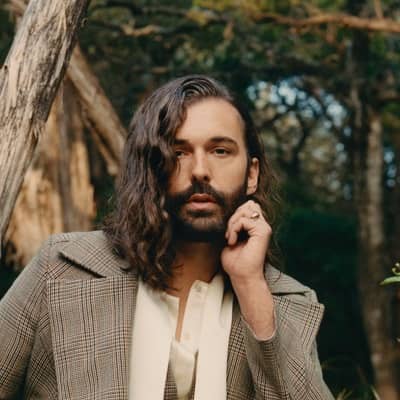 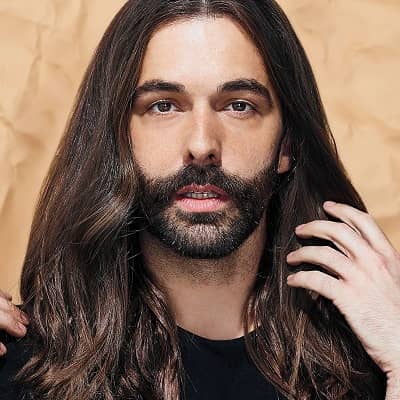 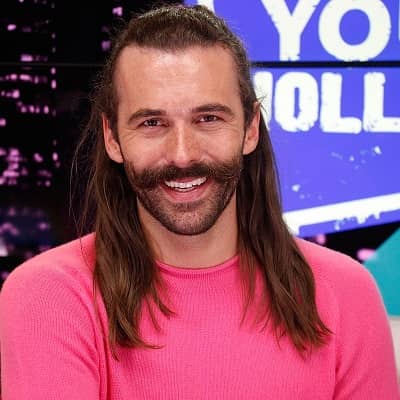 Jonathan Van Ness was born on March 28, 1987, and he is currently 34 years old. Jonathan hails from Quincy, Illinois, U.S., and his zodiac sign is Aries. His full name is Jonathan McDonald Van Ness.

Talking about his family, Jonathan’s mother is Mary Oakley Winters. Mary is the vice president of Quincy Media. Likewise, Jonathan comes from a family of journalists and is the 6th generation of their family-owned newspaper.

Further, Jonathan’s family-owned newspaper refers to broadcast and newspaper conglomerate Quincy Media and the company’s local flagship newspaper – the Herald-Whig. Jonathan is a descendant of the Oakley family. His family has controlled the company since the 1890s. 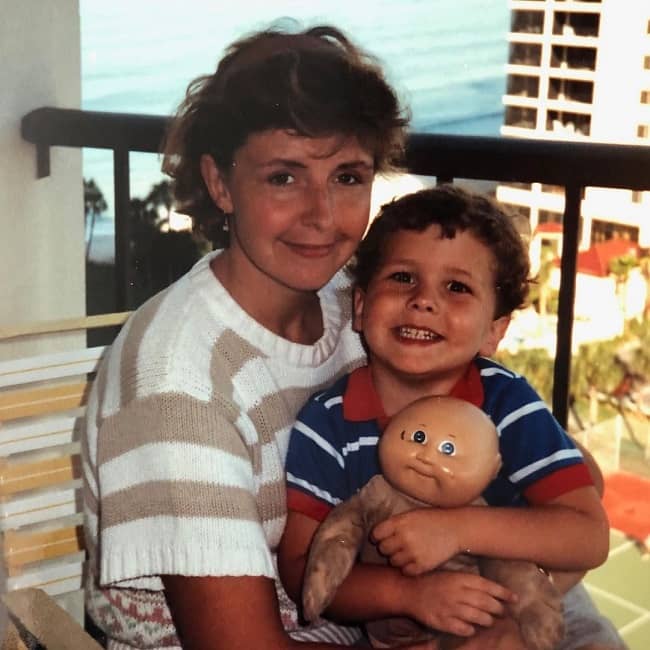 Caption: Jonathan Van Ness with his mother in a childhood photograph. Source: Instagram

Jonathan Van Ness graduated from Quincy Senior High School. Later on, Van Ness attended the University of Arizona where he majored in political science. In high school, Jonathan was the 1st male cheerleader and he continued cheerleading through college.

Talking about his sexuality, Jonathan had been openly gay throughout his life. Jonathan’s pronouns are he/him/his but he indicated that he is okay being referred to with she/her or they/them.

Due to his femininity and natural flamboyance, Jonathan experienced bullying and also received death threats. In response to the bullying, Jonathan used humor as a coping mechanism. He also relied on a small group of close friends for support. In the late 2010s, Jonathan realized that he was gender non-conforming and non-binary.

When he was younger, Jonathan was sexually abused by an older boy at church. He says that this incident laid the foundation for self-destructive behaviors. Also in his early teens, Jonathan used online chats to socialize and sometimes meet older men for sex. One month in his initial semester at college, Jonathan used up his monthly allowance on cocaine. Being too embarrassed to ask his parents for funds, Jonathan eventually turned to sex work.

Further, Jonathan’s addictions to sex and drugs increased to include methamphetamine too. As his grades fell and lost his cheerleading scholarship, Jonathan dropped out after one semester in college. After dropping out, he went on to pursue hairstyling. 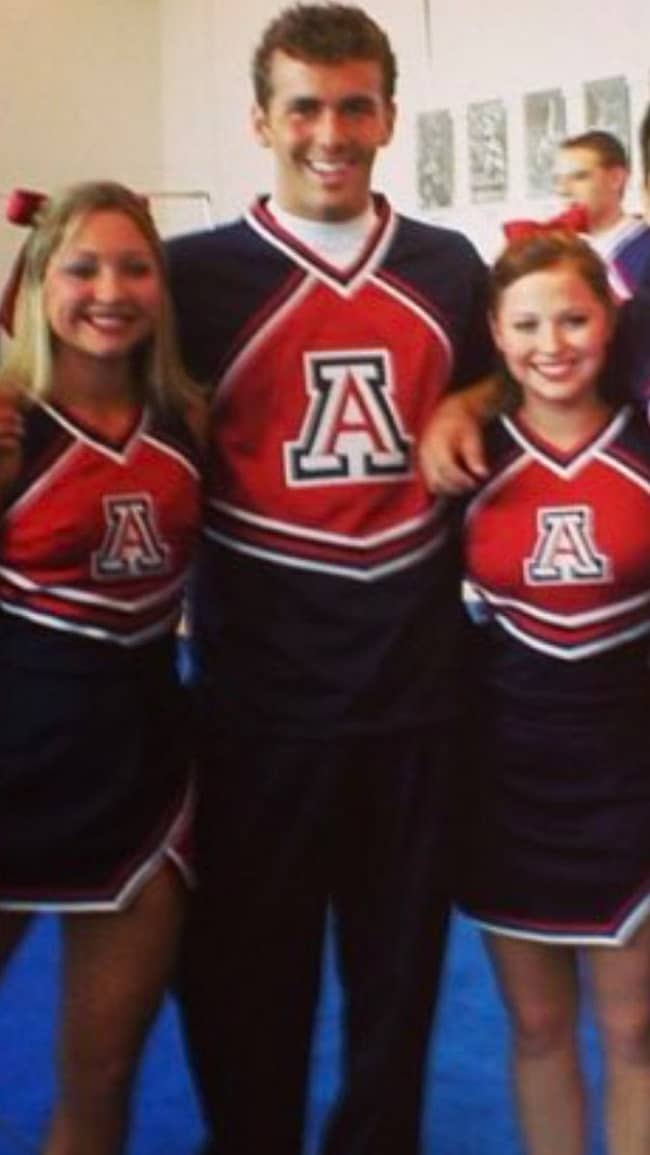 Professionally, Jonathan Van Ness is a famous hairdresser, TV personality, podcast host, activist, actor, and author. He is most commonly referred to by his initials, i.e. JVN. Likewise, the TV personality is also most recognized as the grooming expert on Queer Eye. It is a Netflix series. People also recognize Jonathan for his work on Gay of Thrones. It is a web series parody. Moreover, he is also famous for hosting the podcast called Getting Curious with Jonathan Van Ness.

In Los Angeles, Jonathan worked as a personal assistant at Sally Hershberger Salon. A day in 2012, Jonathan fainted in the salon while doing highlights for a client’s hair. Later on, the hairstylist found out that he was HIV-positive.

He took this as an opportunity to get clean from drug use and publicly shared his story. At present, Jonathan works at MoJoHair and Stile Salon. Both of them are located in Los Angeles and he is actually the co-founder of these salons with Monique Northrop of Arte Salon in New York City.

Similarly, Jonathan received nominations for a Primetime Emmy Award for Outstanding Short Form Variety Series in 2018. This was for his role for Gay of Thrones. The TV personality also appears in a series of UberEats commercials with gymnast Simone Biles. 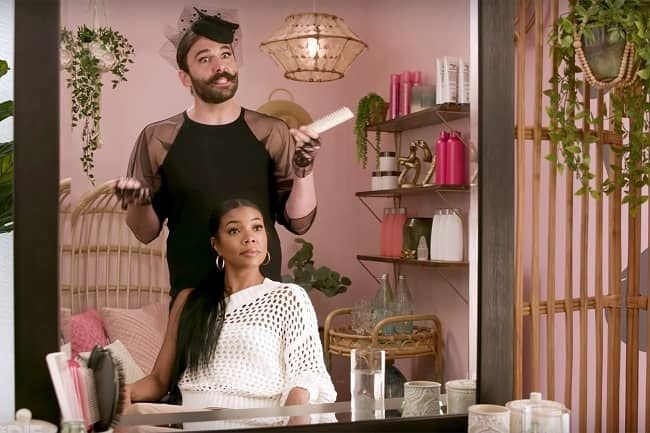 As an author, Jonathan Van Ness published his memoir in October 2019. It is called Over the Top: A Raw Journey to Self-Love. This memoir discusses Jonathan’s past and how it helped sculpt his future. Then recently in 2020, Jonathan released a picture book called Peanut goes for the Gold.

The aforementioned book tells the story of a nonbinary guinea pig named Peanut and their adventures as rhythmic gymnastics prodigy. Peanut is actually inspired by his own childhood pet. Later on, in an interview, Jonathan revealed that Peanut goes for the Gold would partner with No Kid Hungry’s fund #savewithstories.

Jonathan Van Ness is married to Mark Peacock. Jonathan revealed this news in December 2020 and shared that they tied the knot earlier the same year. Prior to their marriage, Jonathan and Mark were partners. On June 5,  2021, Jonathan shared an Instagram post wishing his husband on their 1st wedding Anniversary. 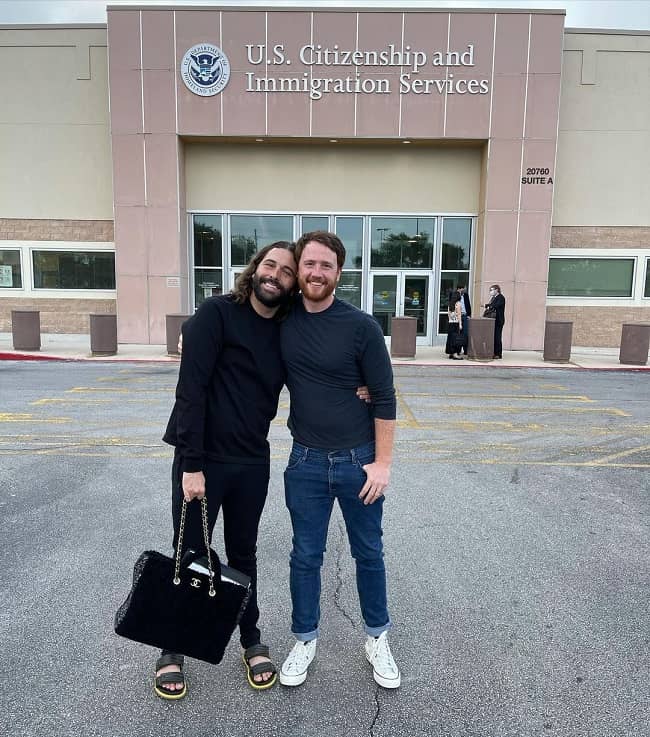 Caption: Jonathan Van Ness posing for a photo with his husband Mark after the Londoner received his Green Card Source: Instagram

Jonathan Van Ness stands tall at an approximate height of 1.83 meters or 6 feet. There is no exact data regarding his weight but in 2018, Jonathan revealed that he gained 70 pounds in 3 months after he lost his stepdad.

Talking about his social media presence, Jonathan Van Ness joined Twitter in June 2013 and so far has over 834.3K followers as of June 2021. His username on both Instagram and Twitter is @jvn. On Instagram, he has earned over 5.2 million followers.

The TV star then created his “Jonathan Van Ness” Youtube channel on  May 20, 2013. So far, this channel has earned over 13.9K subscribers. On Facebook, Jonathan has over 525K people following his journey. Moving on, Jonathan Van Ness has a net worth estimation of around $5 million US dollars.